David Koch has unleashed on a young protester ‘pest’ who suspended herself over a freight rail line in what is now the fourth day of wild climate change stunts.

Emma Dorge, 25, proudly filmed herself dangling over the rail line in Sydney’s Port Botany on Friday morning, blocking all freight trains from coming and going.

Speaking to Sunrise, Ms Dorge said she was taking action that can ‘materially disrupt the functioning of Australia and give it a chance at changing this exploitative, disruptive system that is killing us all’.

But Kochie was having none of it and questioned how she would like if it he came to her house and disrupted her life – before threatening to cut the ropes she was hanging from.

Emma Dorge, 25, proudly filmed herself dangling over the rail line in Sydney’s Port Botany on Friday morning, blocking all freight trains from coming and going

‘This is the fourth day in a row you have blocked roads, commuter rail lines, why disrupt everybody else’s life because you have to be in your bonnet?’ he said.

‘Can I have your home address so when I’m angry about something I’ll go and block your house and disrupt your life? Can I do the same thing?’

‘What gives you the right to decide to make people late for work or late getting to a hospital or school just because you’re antsy about something?’.

The 25-year-old who is a member of climate activist group Blockade Australia said action was needed to get the attention of the government who has ‘no regard for human life’. 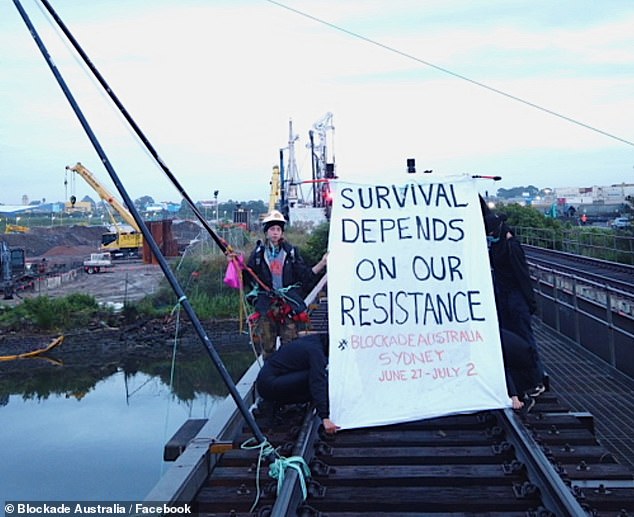 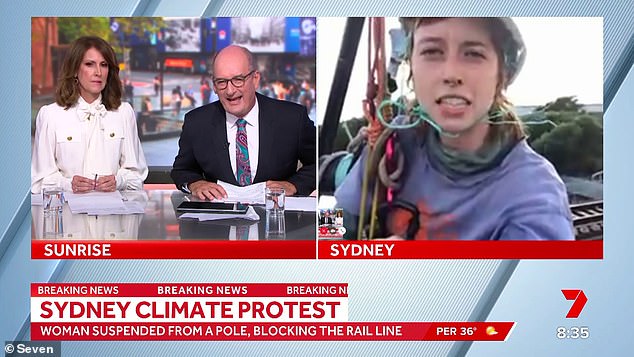 Appearing on Sunrise, David Koch unleashed on the ‘pest’ and said he would just ‘snip’ the ropes she was dangling from

‘I think this is a really appropriate response to a destructive system,’ she said, still suspended on ropes.

‘You won’t be getting your kids to school when fires and floods and famine take over.

‘I’m doing this for the children of the world who have no hope.’

Koch’s patience with the protester quickly ran out, with the TV presenter asking Ms Dorge if she was a ‘good swimmer’ in the event police cut the ropes she was hanging on.

‘Alright, Emma. We got you on because we want to hear from a pest and what they looked and sounded like,’ he said.

‘Good luck with that. As I say, I would just snip the wires I think. It is ridiculous.’

Ms Dorge was arrested just before 10am on Friday as water police and local officers worked to bring her down.

Charges are expected to be laid.

Ms Dorge has been involved in many protests around Australia over the years.

In 2019 she was fined $1,400 for blocking traffic in Brisbane’s CBD while calling for urgent action on climate change in an Extinction Rebellion demonstration.

Similar action was seen over Port Botany on Thursday morning with one man hanging from a nine-metre pole before he was brought down by police.

The demonstrator Alex, 33, said Australia was facing ‘a climate catastrophe’ and ‘sustained action’ was the only way to bring about change.

‘I am taking direct action because without a halt to business as usual there will be no true change,’ he said.

Towards the end of a livestream filmed by the protester, a police officer can be heard telling him he is under arrest on the charge of ‘trespassing’.

The protest follows a similar demonstration by the group in nearby Banksmeadow on Tuesday – where a man blocked rush hour traffic by suspending himself from a pole above a bridge.

The bridge is the only access point for vehicles to enter and exit the busy Hutchinson terminal at Port Botany.

The Blockade Australia activist posted a live video of himself suspended over the bridge holding a banner reading ‘No Borders, No Nations, Stop Australia’s Operation.’ 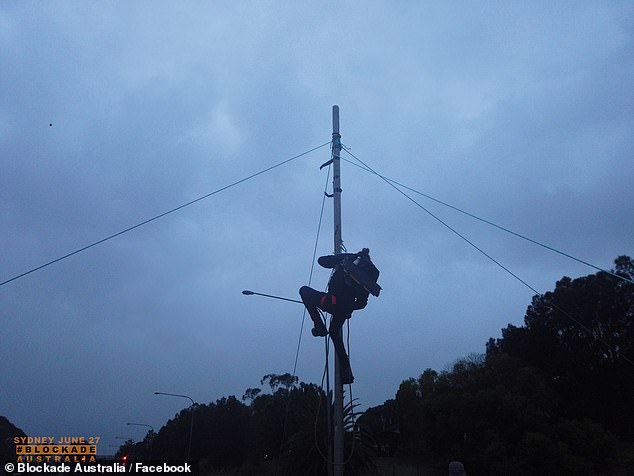