That mistress was television – the industry he dominated for 22 years as CEO of both Australia’s major commercial networks, Seven and Nine, under proprietors Kerry Packer and Kerry Stokes.

Leckie, 70, who took both networks to Number One, died at his farm in the NSW Southern Highlands on Tuesday following a decade-long illness.

A handful of close family and friends, including his sons and philanthropist second wife Skye, remembered ‘Big Wave Dave’ as the ‘last of the rockstar’ TV CEOs at the Northern Suburbs Crematorium on Friday.

Harry remembered his dad as a ‘bulldog’ who was boisterous, obsessive and a ruthless competitor, and also an adoring and sensitive father and husband.

‘Dad was devoted to mum. They were soulmates. An unconventional but always a laugh-a-minute marriage.

‘Although he had another mistress for many years … and unfortunately for dad she came in the shape of a square TV screen.’

Philanthropist Skye Leckie adjusts her son Harry’s tie ahead of the socially-distanced service for TV executive David Leckie on Friday evening. Due to Covid restrictions, the number of mourners was capped at 10 – but many more watched online 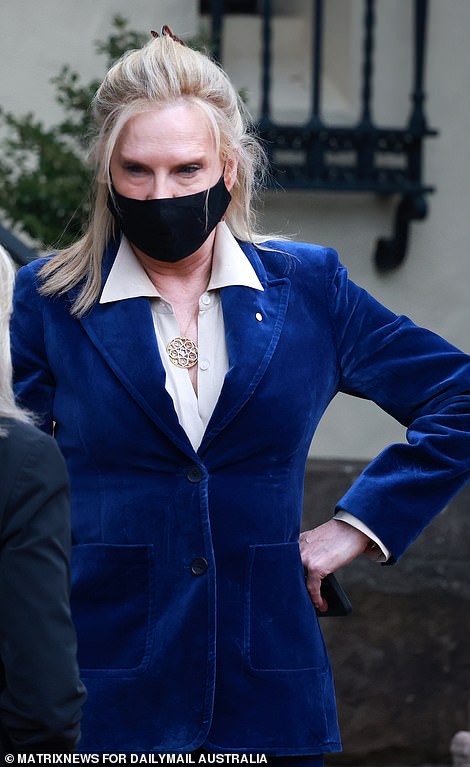 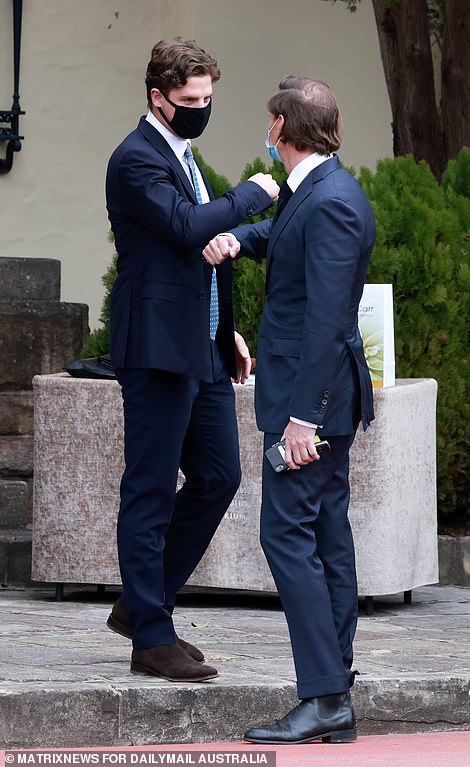 Philanthropist Skye Leckie recalled her ‘extraordinary’ union with David. Her son Harry describing them as ‘soul-mates’ and a ‘laugh a minute marriage’. Son Ben said his dad had been described as a ‘rock star. He’d be having a good laugh over that – he’d probably say this is the only time ten people turned up to farewell as rockstar.’ (Covid restrictions meant the service was capped at 10 people) 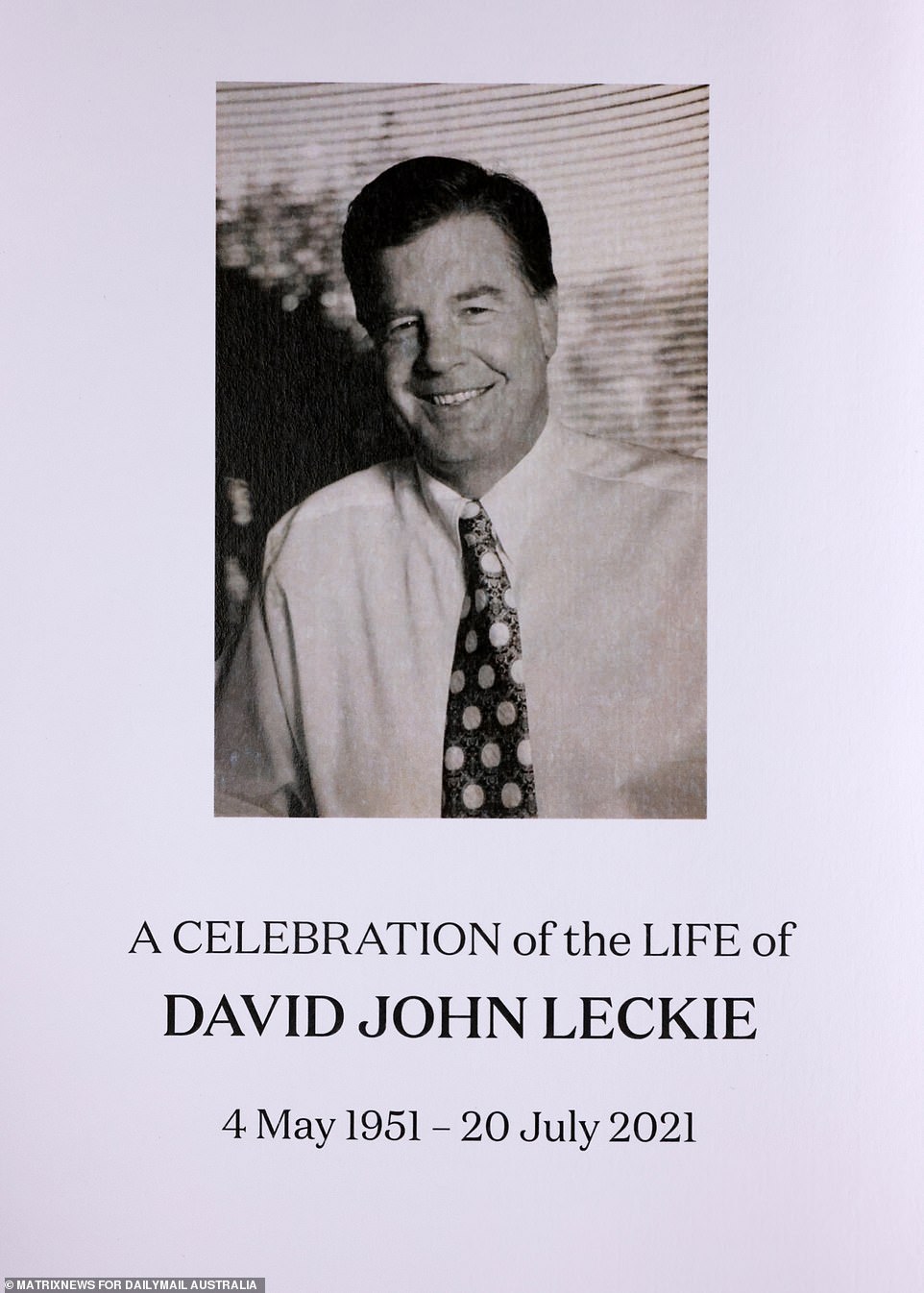 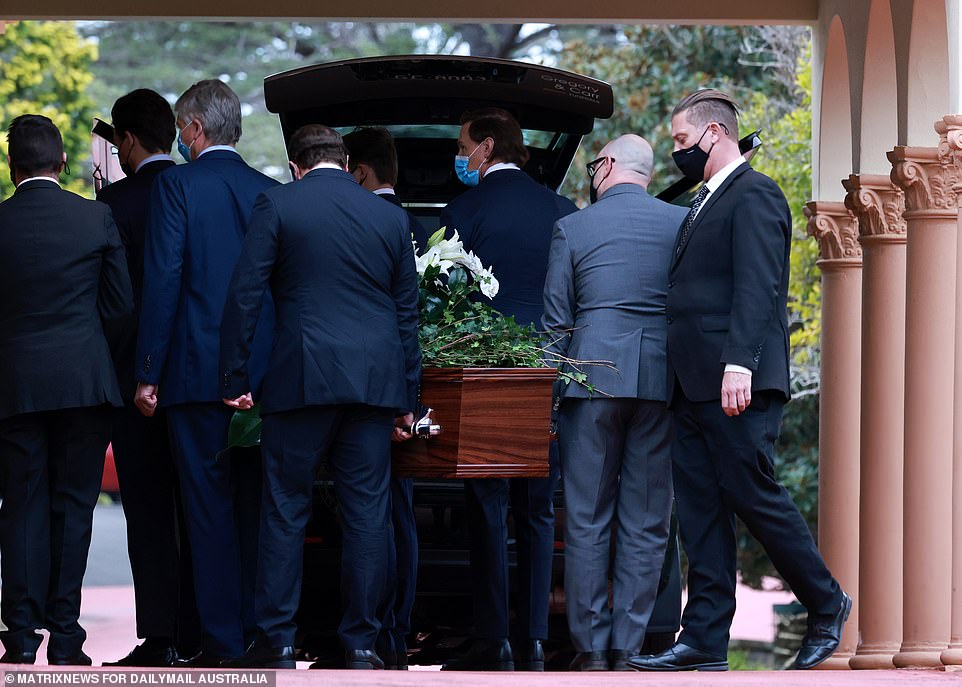 Skye used the same word to describe her own ‘extraordinary union’ with Leckie: ‘He did have his mistress. He enjoyed the cut and thrust of network life, and he never took his eye off the ball with either of those networks.’

‘Winning the ratings’ was what made him happiest in life, Seven’s commercial director Bruce McWilliam said during a video tribute.

8.31am each morning – the time the ratings dropped – was always ‘judgment day’ for the media executive. Losing just a point in the ratings was a ‘biblical’ blow to David, Skye said.

Legend had it he would swing a nine-iron golf club as he waited for the results and fume: ‘What the f*** happened last night. What happened?

Skye recalled: ‘David always felt the pleasure or the pain of his team. He would usually give himself a life sentence because the ratings never quite went the way he wanted.’

Mourners heard he had an eye for TV talent. ‘If you haven’t been hired and fired by David Leckie you’re not going anywhere,’ said son Ben.

Some of his aptitude for spotting big names was clear in those who gave video tributes – broadcasters Alan Jones, Tracey Grimshaw, Sonia Kruger and Larry Emdur. 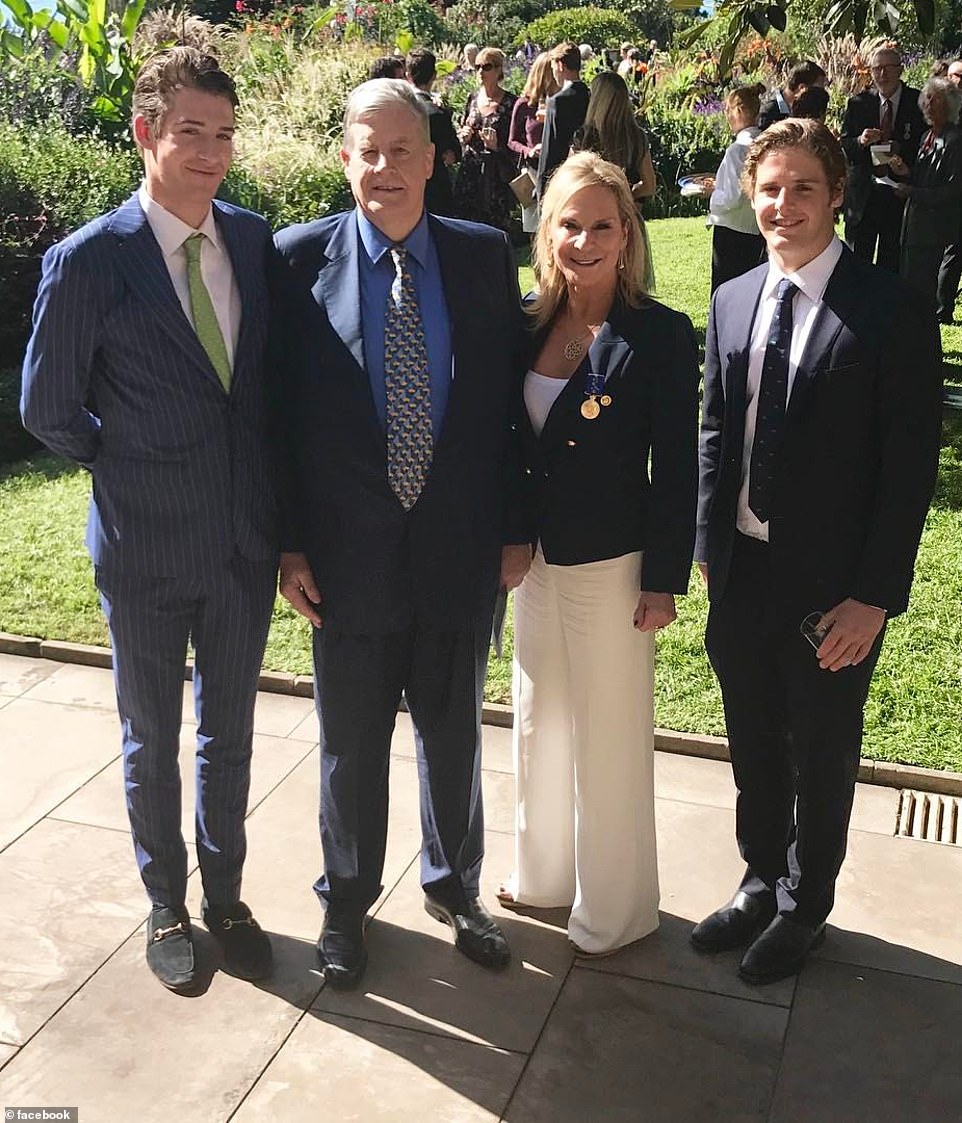 David Leckie came to fame in an era when television network bosses were larger-than-life characters who could attract as much attention as on-screen stars. He is pictured with wife Skye and sons, Harry (left) and Ben

Ben Leckie said his father taught him to ‘zig’ when everyone ‘zagged’, he said.

They were words of wisdom from a ‘big man with a big personality’.

‘After this weeks stories and testimonies to you, Davo, that’s one word we would never say you are,’ she said.

Skye remembered him as ‘my north, my south, my east and my west.

‘I feel very lucky to have shared my life with someone, for who the flame will never go out.’

The service ended with that song favoured by big men – Frank Sinatra’s My Way.

Hard-drinking and prone to profanity, TV titan David Leckie dominated the notoriously cutthroat industry for decades – but behind the bravado and bluster there was a softer side to the last rock star CEO

David Leckie made his name in an era when television network bosses were larger-than-life characters who could attract as much attention as on-screen stars.

Leckie was a colossus of the industry, stomping across and through its landscape like a dinosaur – which is what some detractors thought he was.

He was big, bold, brash and boisterous. Often blistering and sometimes boorish. Harsh critics called him a bully boy but he could also be a charmer.

Leckie was a noted drinker and prone to profanity, almost as well known for his long lunches as being one of few men to run two television networks. 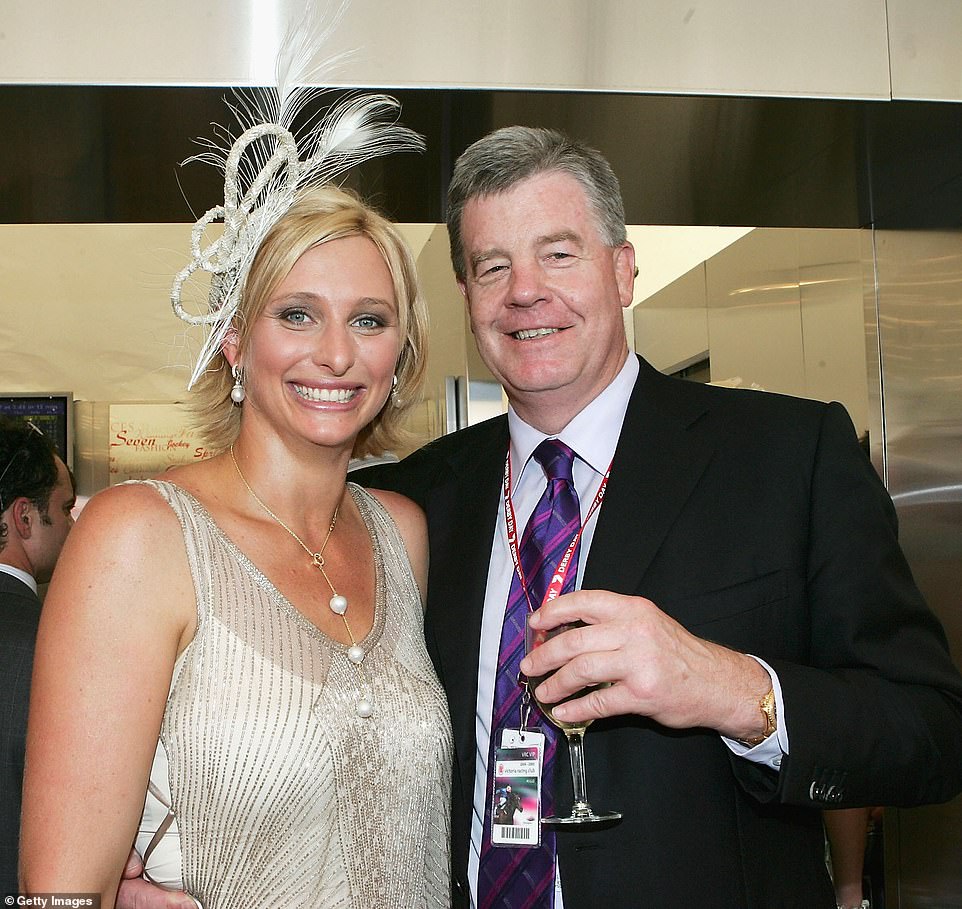 Leckie was a fearsome drinker and prone to workplace profanity, as well known for his long lunches as being one of few men to run two television networks. He is pictured with presenter Johanna Griggs at Fleminton’s Derby Day in 2004 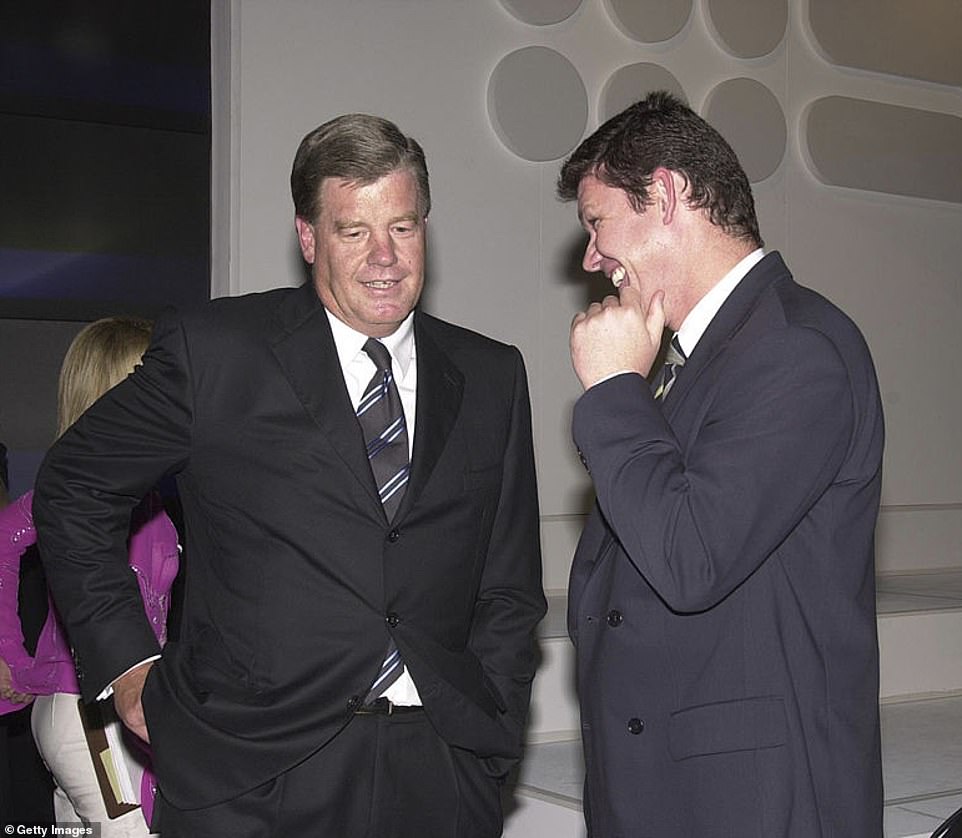 Leckie worked for Kerry Packer for two decades until he was sacked as chief executive of the Nine Network. He fell out with Packer’s son James, who called him a ‘raging f***wit’ at Leckie’s predecessor Sam Chisholm’s 70th birthday party

In the skit, urbane commentator Richie Benaud joined the then Nine boss for lunch and asked the waiter for water. The waiter then asked Leckie if he would like another schooner of Drambuie.

Some of those close to Leckie believed that behind the abrasive front he suffered from shyness; while at Nine he was known to mutter that no one really liked him.

Beside him through most of it was his sparkling Sydney socialite wife Skye.

Leckie, who has died aged 70 after a long illness, will be remembered as a titan of television who could inspire and terrify in equal measures but was impossible to ignore.

Early in his tenure as Nine boss Leckie attended film screenings in Cannes where he gave a speech in which he called the audience a bunch of ‘freeloaders’.

He went on to describe the French Riviera as like the Gold Coast, ‘only with p***-poor beaches’. Only Leckie could get away with it. 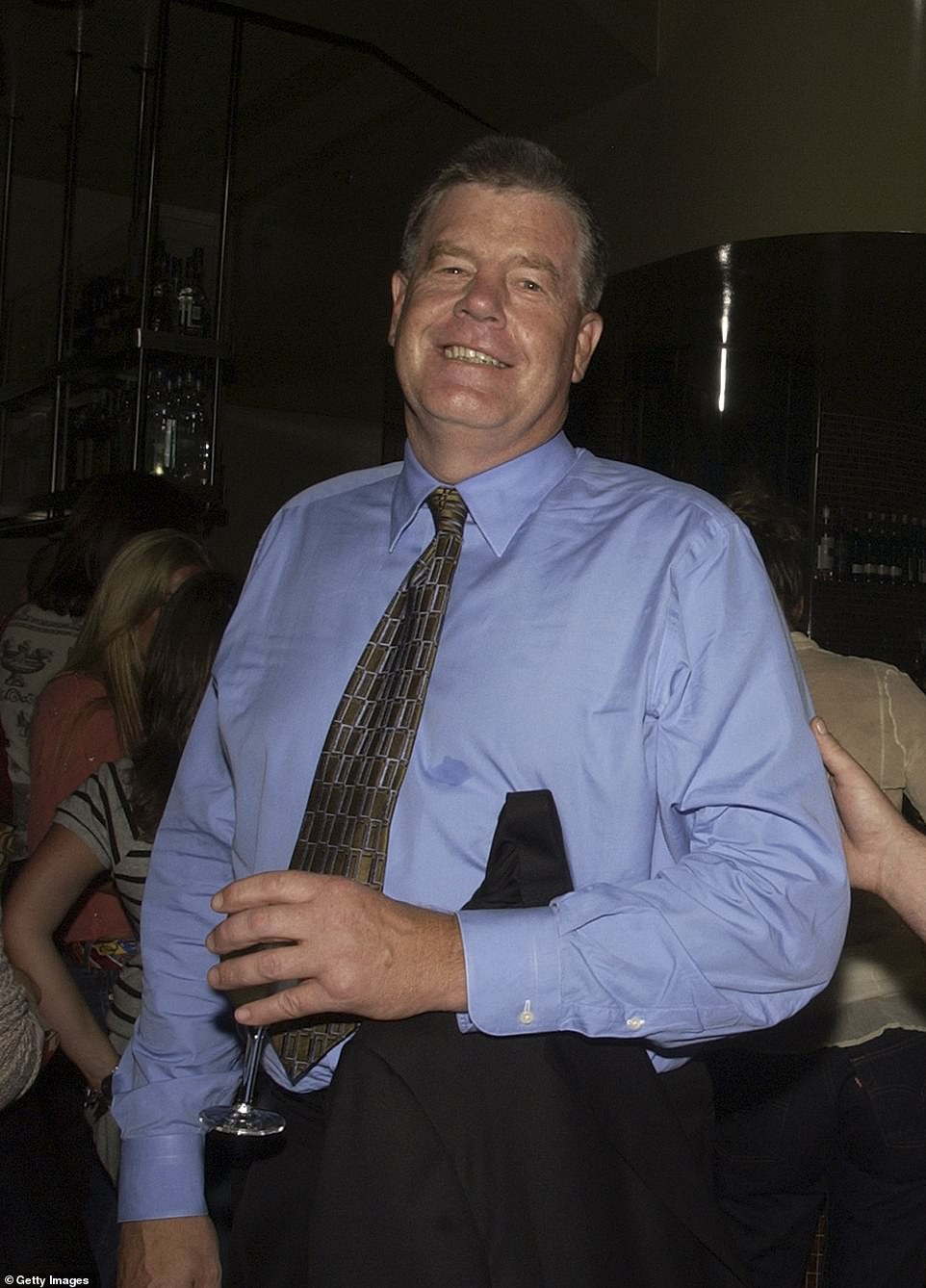 Some of those close to Leckie believed that behind the abrasive front he suffered from shyness; while at Nine he was known to mutter that no one really liked him

As his longtime lunching partner and former Nine news boss Peter Meakin has said: ‘At least with Leckie you won’t die wondering.’

‘Without a doubt he was the best TV executive this country has ever seen and an important influence and mentor for so many people and careers,’ Warburton said.

‘He was once labelled the last of the rock star CEOs and I’d say that was a pretty good description.’

Leckie began as a sales executive at GTV-9 in Melbourne and by 1982 was nine’s sales director in Sydney. He became managing director of the network in 1990 and chief executive in 1994.

As Nine boss he built on the work of predecessor Sam Chisholm, notably introducing the two wildly successful Footy Shows and lifestyle programming.

After two decades working for Kerry Packer, who sacked him in 2001, Leckie moved to Seven where he helped the network take the top-rating mantle from Nine. 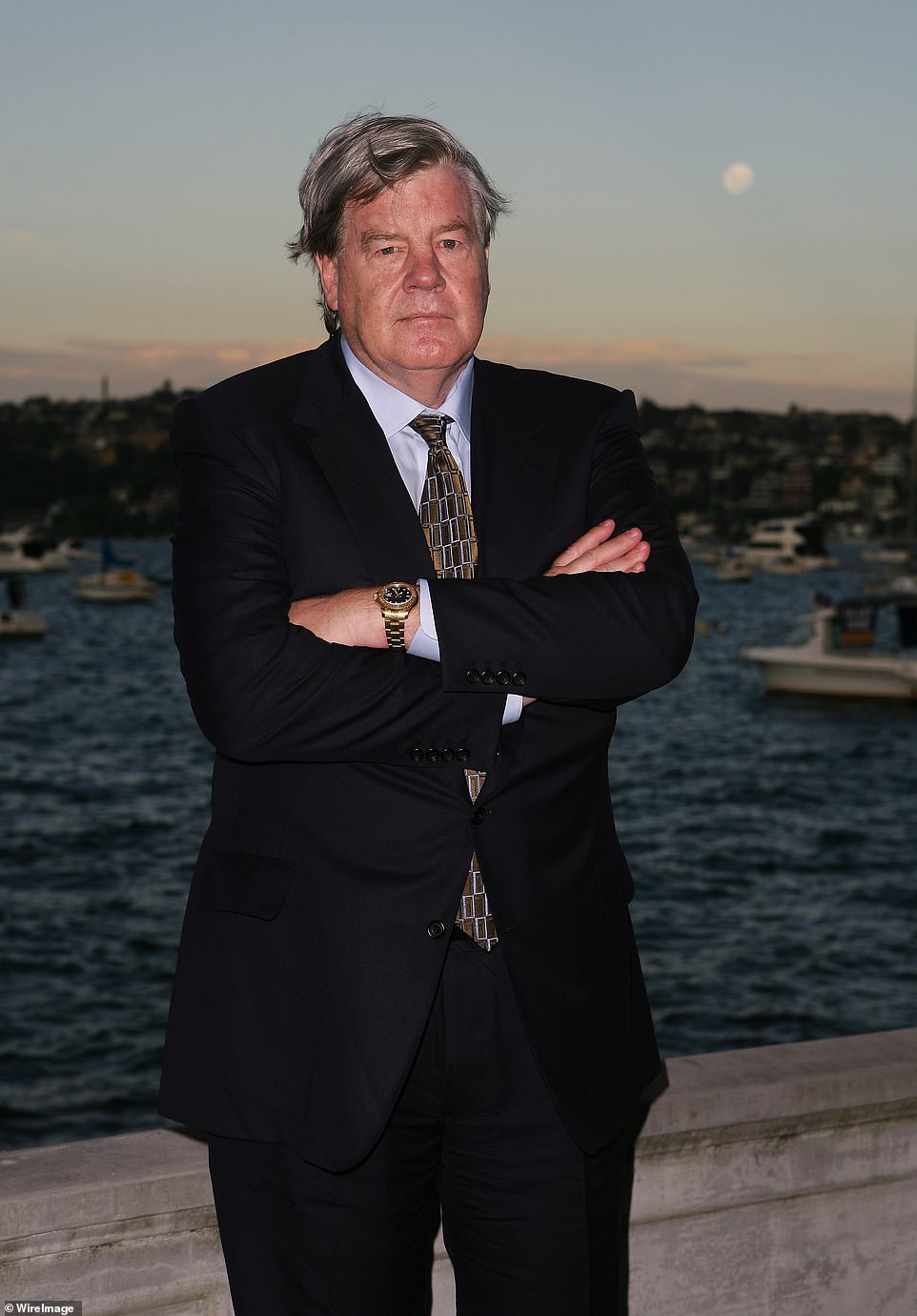 His parting with the Packer family was spectacular and final.

Leckie was in charge of Seven when Today Tonight ran a series of unflattering stories about Kerry’s son James, who famously confronted Leckie at Chisholm’s 70th birthday party in 2009.

‘My father was right, you are a raging f***wit,’ James reportedly told his former friend. ‘Now f*** off.’

Leckie continued his indiscreet ways at Seven, once declaring at a dinner for the network’s flagship drama program Blue Heelers that the show was ‘boring’.

He was joined at Seven by Meakin as head of the network’s news and current affairs. Meakin described their relationship as ‘mostly reliant on mutual abuse’.

Meakin once told the Sydney Morning Herald: ‘He’s a guy who enjoys conflict’.

Leckie also brought in charity fundraiser wife, who had been known as ‘Mrs Channel Nine’, to direct the interior design of his Seven office.

But he was solely behind removing management files from an office recess and installing a bar. 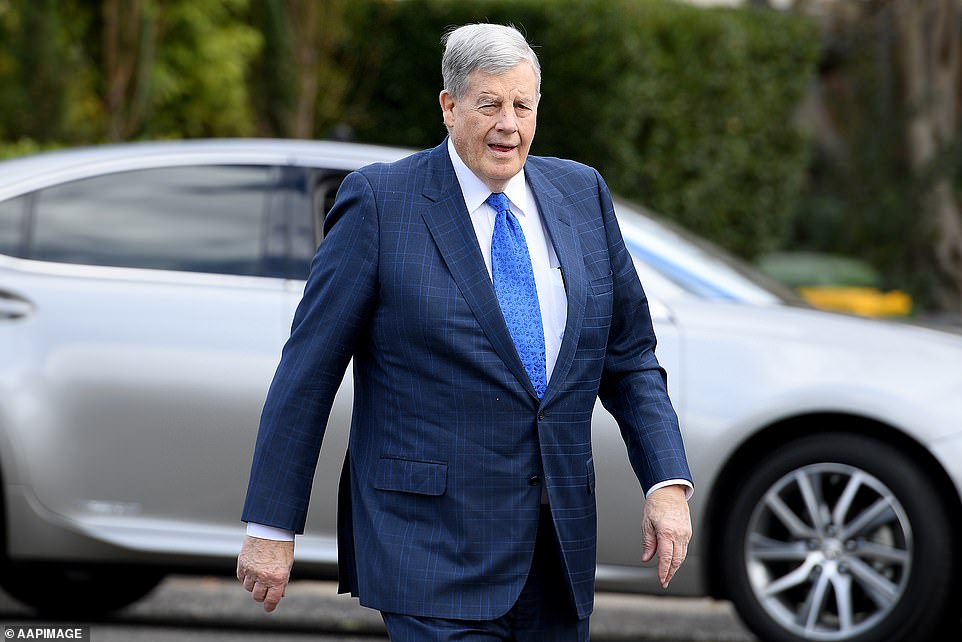 Leckie began as a sales executive at GTV-9 in Melbourne and by 1982 was nine’s sales director in Sydney. He became managing director of the network in 1990 and chief executive in 1994

She has said she married her match in Leckie. ‘He would say working for Kerry Packer was scary, being married to me was scarier,’ Skye told the Wentworth Courier.

The pair met at a Nine network Academy Awards lunch – she thought he was ‘some sales guy or whatever’ – and he proposed at the Lowell Hotel in New York over Christmas lunch.

‘We were having an argument and he said, “Oh shut up” and he handed me a briefcase and said, “Will you marry me?”‘ she recalled.

The Leckies were legendary hosts. Parties at their onetime Centennial Park home featured billionaires, prime ministers, and major figures from the arts.

Leckie took Seven past Nine in the ratings with a string of hit programs in the mid 2000s, including Lost and Desperate Housewives.

In 2008, he was placed in an induced coma after battling complications from an infected finger injury, but recovered well enough to return to work. 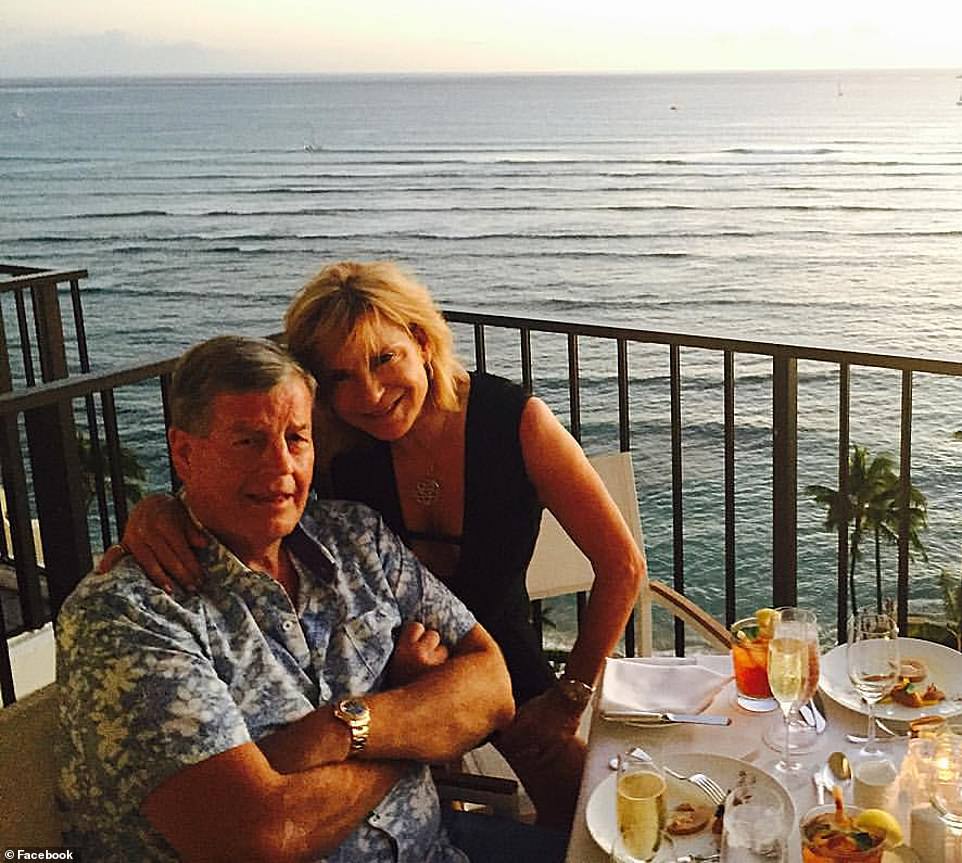 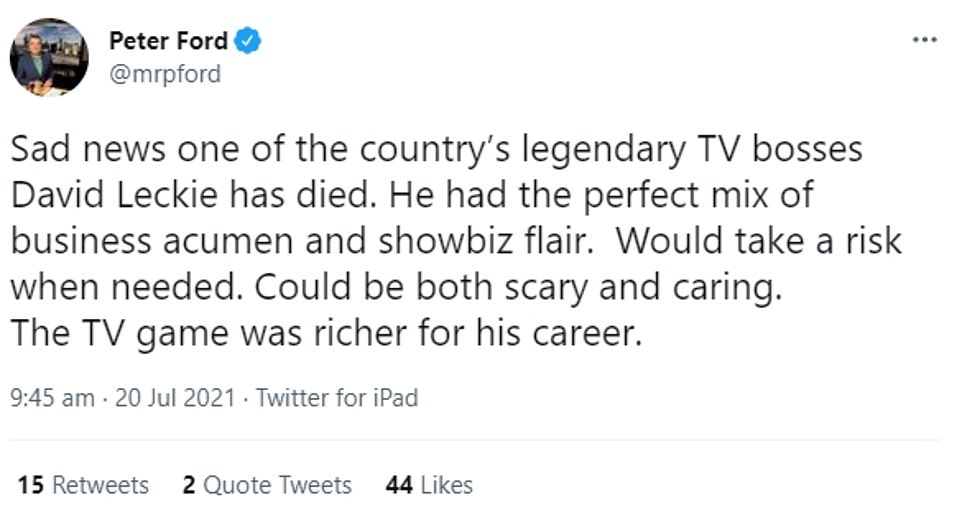 Entertainment reporter Peter Ford described Leckie as one of the country’s legendary TV bosses. ‘He had the perfect mix of business acumen and showbiz flair’

He was chief executive of Seven under billionaire owner Kerry Stokes until 2012 when he stopped down.

James Packer said then he had been loyal to Leckie for years but his former friend had kicked him when he was down.

‘But that was one of his few redeeming features. He ran Nine for ten years as No 1, and got moved on.

‘He took Seven from No 2 to No 1, and got moved on. Why am I being hard on him today? Because that’s exactly what he did to me.’

Leckie was moved to a role as executive director of Seven West Media, but his days in control of a network were done.

‘This is the end of a swashbuckling era where chief executives were colourful characters,’ Chisholm told the AFR. ‘He is a figure that has bestrode the television industry. It will be the poorer without him.’ 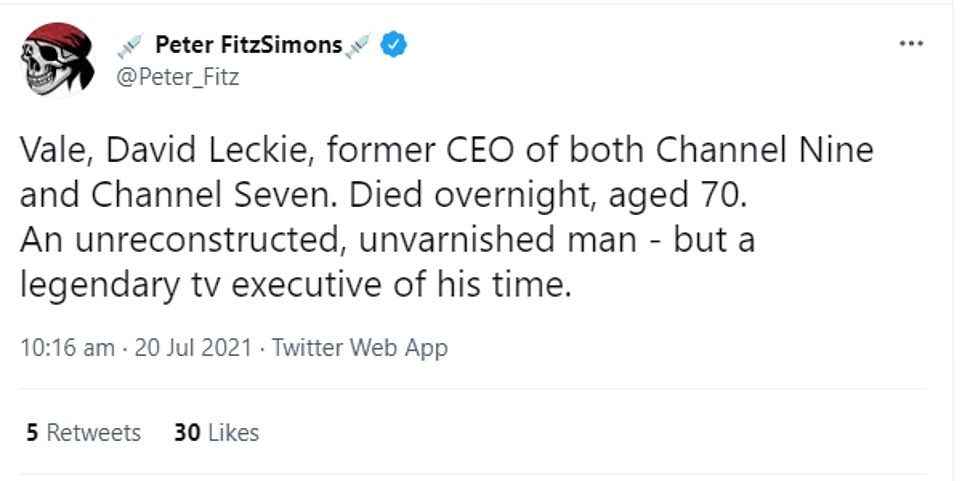 Columnist and author Peter FitzSimons said Leckie was ‘an unreconstructed, unvarnished man – but a legendary tv executive of his tiime’

Leckie stepped down from Seven West Media in 2014 and moved into a consultancy role. A slimmed-down version of the old warhorse emerged the next year, off the grog.

He took several years away from the spotlight to concentrate on his health before coming out of retirement in March last year to help reinvigorate Seven once more.

Warburton, who had quit the network in 2011 after clashing with Leckie, welcomed him on board.

Shortly after that appointment as a part-time program consultant Leckie was back at his old haunts at Woollahra, the Hotel Centennial and Bistro Moncur.

Leckie’s family released a statement about his death in the Southern Highlands on Tuesday morning.

‘With immense sadness: David passed away at Mulberry Farm, Robertson, after a long illness this morning. He was surrounded by his loving family.’

Seven presenter Kylie Gillies broke down when she heard the news live on The Morning Show. Her co-host Larry Emdur recalled being ‘hired and fired by him many times.’

‘A real titan of our business,’ Emdur said. ‘Boy, has that man left a mark in the business. That will affect the entire industry today across all networks.’