She recently shared a ‘swollen’ bikini photo on Instagram to show what happens if she ‘eats too much’.

But Davinia Taylor looked unrecognisable as she shared her incredible weight loss transformation with snaps uploaded to Instagram on Friday.

The Hollyoaks actress, 42, posted a before picture as she wore a grey vest top, figure-hugging leggings and a beige overcoat.

Before and after: Davinia Taylor looked unrecognisable as she shared her incredible weight loss transformation with snaps uploaded to Instagram on Friday

Alongside it, she posted an after snapshot as she flaunted her toned physique in a black bikini and sported a darker hair style.

Davinia uploaded the snaps with a lengthy caption that read: ‘What a difference a bit of #Biohacking makes !!! Detox, reduce inflammatory foods, run, sauna, supplement, wim Hof, Cold exposure, NAD+, nootropics, kombucha, Intermittent fasting, gut health ..all these protocols have helped me stay mentally healthy and if I do that the body follows suit !!!

‘Think I’m pushing a size 16 there and then I’m down to an 8 (and maintained it for years !! No yo-yo or massive cravings either) All beings in the brain #brainhealth #goodfats #lowsugar #paleo [sic].’ 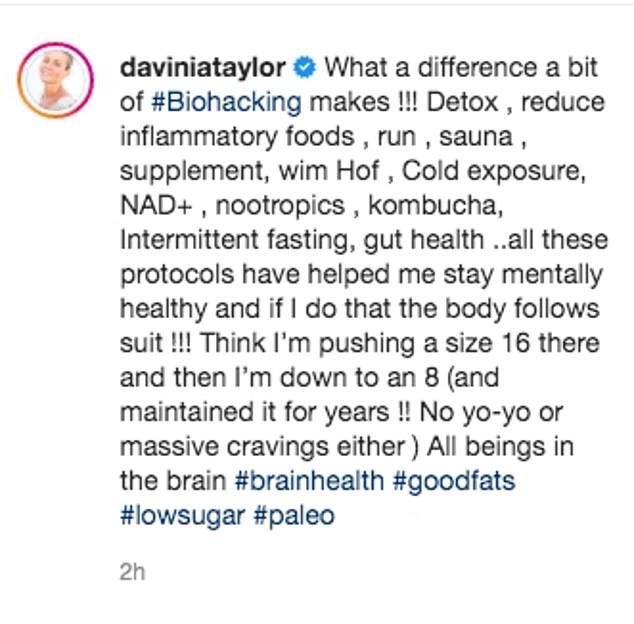 Healthy: Davinia uploaded the snaps alongside a lengthy caption that began: ‘What a difference a bit of #Biohacking makes !!!’

Her transformation snaps come after she shared a ‘swollen’ bikini photo on Instagram to show what happens if she ‘eats too much’ but says it’s no big deal.

Telling her followers she is neither pregnant or overweight, Davinia revealed that she changes shape when she eats. She wrote on social media: ‘I know women who eat and they do not change shape… I am not one of them.

‘But I am super healthy, super fit and super ok with a bit of swelling while my Thai green curry, stivia chocolate, bottle of kombucha, coconut cappuccino, sourdough butty and handful of olive oil crisps digest!!!! 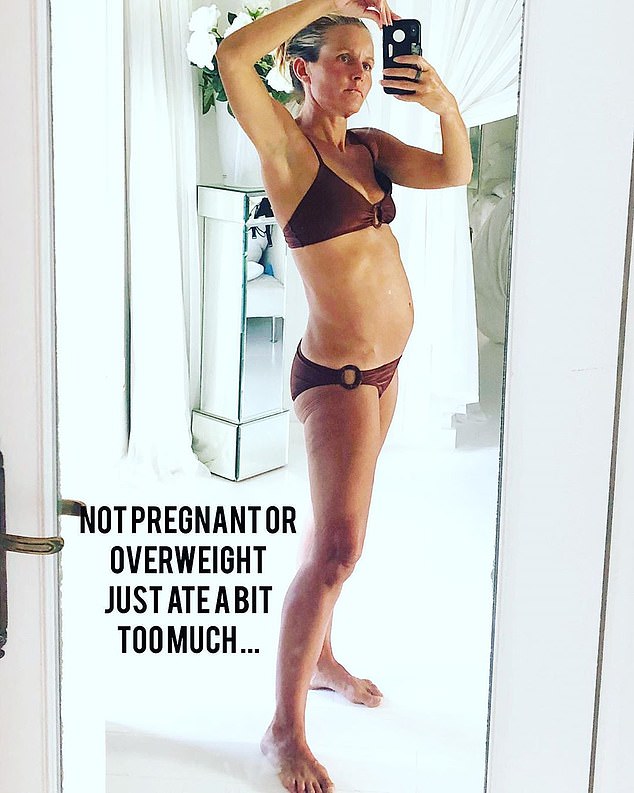 ‘Not pregnant or overweight, just ate too much’: Her stunning snaps come after she shared a ‘swollen’ bikini photo to show what happens if she ‘eats too much’

‘However I do eat far too quickly!!!! Fret not if you have to undo your pants a bit as long as your not eating ultra processed foods you will digest, assimilate and excrete the tasty fuel regardless!!!! Enjoy your dinner #body #bodypositive #biohacking’.

Davinia looked incredible in her brown bikini as she posed in front of her mirror to show her followers her honest post.

Then taking to Instagram Stories, Davinia, who is living in Spain, also shared how happy she was that she was going to soon be reunited with her son, Grey, 12.

Grey is Davinia’s son with Dave Gardner and he is currently living in the UK. She said: ‘Yay! Spain are going to open their borders, so I can get my son over here.’ 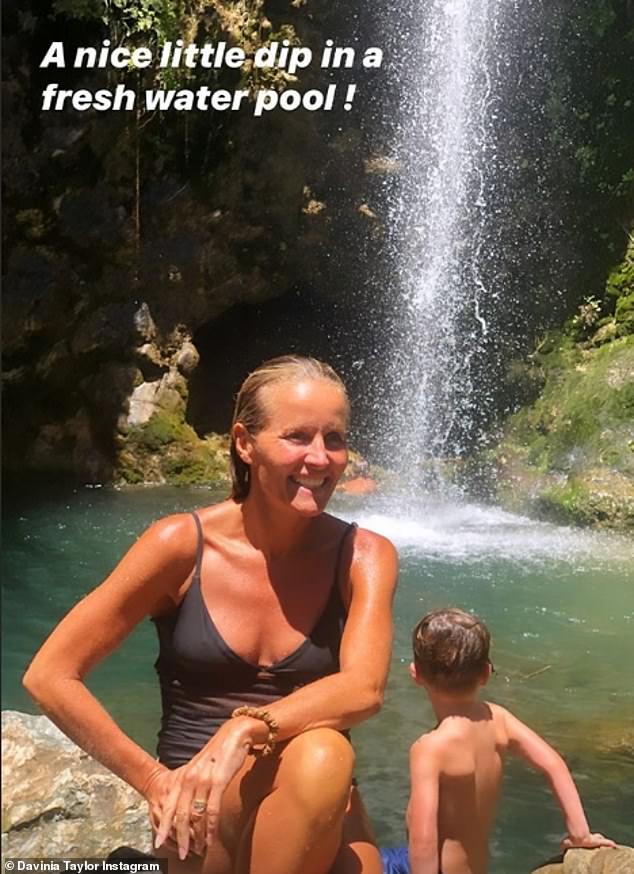 Quality time: She also shared pictures from her weekend with three of her four sons

Davinia also said she was planning on giving a talk at on her Stories about inflammation. She said: ‘Inflammation is my big bug-bear. It brings water weight and what inflames one person doesn’t inflame another.

‘I’ll also be talking about the inflamed mind, as well. Depression.’

Davinia is also mother to sons Luxx, nine, whose father she has never revealed, and Asa, six, and four-year-old Jude, with her partner Matthew Leyden.