Dawn French has said she is concerned that cancel culture means modern comedians might not be able to do edgy comedy.

The French and Saunders star, 63, fears comedy could lost one of its ‘most interesting,’ dynamics if the current climate puts an end to risky stand-up routines.

It caused the Vicar of Dibley actress to say she’s glad she’s not starting out her career now.

Dawn French, pictured at an event raising awareness of theatres reopening last month, has said she is happy she’s not starting out her comedy career now, as she fears cancel culture is putting the ‘edgy,’ side to stand-up at risk

In an interview with Times Radio, she said: ‘I don’t really know how we go forward from this strange position we’re in, certainly in the world of stand-up comedy where the edges are where it’s most interesting.

‘I want those edgy people there challenging us all the time and making us laugh.

‘The kind of laughs you have when you think that’s one of the naughtiest things I’ve ever heard, or there’s a person inventing a character who is everything awful.

‘But now I just don’t know if you’d ever be able to do that because you’d just have so many haters on your back and I don’t know how we explore it anymore.

French also addressed the racism she encountered when she was married to Sir Lenny Henry, and said: ‘I had never experienced anything like that until I met him and I just couldn’t believe the continual racism that happens in his life, the casual, insidious racism which I found really offensive.

‘But then the big giant ‘let’s smear s*** on your door and try to set fire to your house’ kind of racism and I was so angry about it and that’s what got us through it.

‘For a while, we had the police living inside our home when some people had scratched really racist slogans on every panel on two cars outside our house. 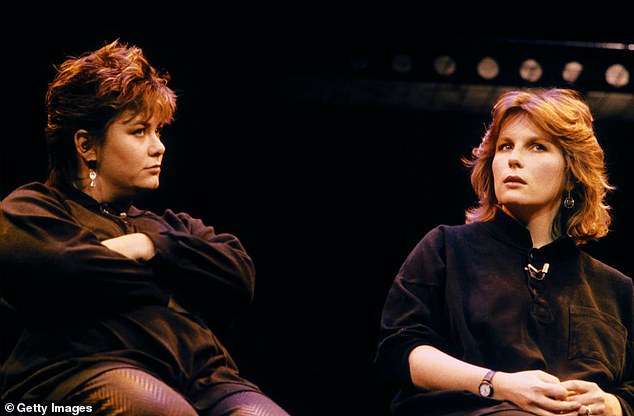 Dawn French rose to fame as one half of the comedy duo French and Saunders, with Jennifer Saunders. In an interview with Times Radio, she has revealed the racism she experience while she was married to Lenny Henry

‘And now I have a mixed race daughter and I see what she experiences, I see it. But she’s very strong and she can sniff a racist at 200 yards and takes a nice steep swerve to the left.’

The full interview will be broadcast on Mariella Frostrup’s show on Times Radio at 1pm on October 12.