An estimated 15 million leisure trips are expected to be made this weekend as restless Britons flock to parks and beaches in England to enjoy sunny weather on the first weekend since lockdown was eased.

Nearly half of the journeys to be made by car will be no more than 10 miles long, while 11 per cent of drivers polled said they are planning to travel up to 30 miles just to reach a beach.

A survey of 1,317 drivers conducted by the RAC suggests that one in five (23 per cent) drivers will drive up to 10 miles to reach their destinations, with 6 per cent travelling up to 30 miles to get to a park.

One in 20 drivers (5 per cent) said they expect to drive more than 30 miles for recreation, according to the poll.

Taking into account the number of licensed cars on the road, the RAC calculated that an estimated 15 million trips will be made today and tomorrow, a week after Boris Johnson eased restrictions.

But several tourist boards are urging people to stay away due to fears they will be overwhelmed by city visitors.

And isolated towns and villages dotted around beauty spots, which have largely managed to insulate themselves from coronavirus, are anxious about being breached if people suddenly journey to rural areas.

An estimated 15 million leisure trips are expected to be made this weekend as restless Britons flock to parks and beaches in England to enjoy sunny weather on the first weekend since lockdown was eased (pictured, at Brighton, March 15) 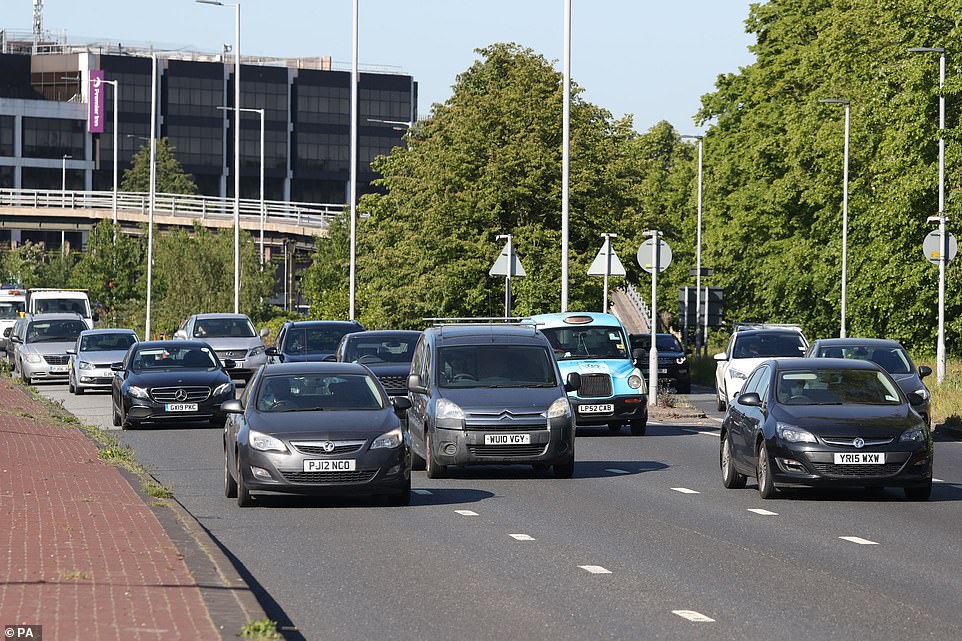 Taking into account the number of licensed cars on the road, the RAC calculated that an estimated 15 million trips will be made today and tomorrow, a week after Boris Johnson eased restrictions (pictured, traffic on the A4, May 15) 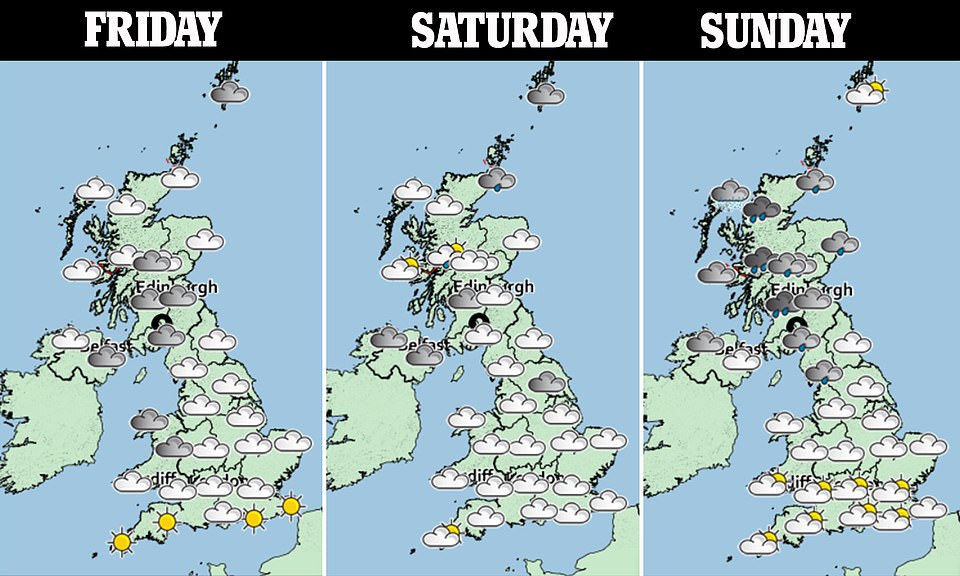 Most of England and Wales will be dry this weekend, with sunny spells in parts of the country today and tomorrow

Today marks the first weekend of eased lockdown restrictions, and it is anticipated that the British public will rush outdoors to enjoy expected good weather in England and Wales.

RAC spokesman Rod Dennis said: ‘In normal times, the weather warming up in time for the weekend would spell traffic jams on routes leading to tourist hotspots.

‘These figures suggest that’s less likely this weekend, with the vast majority of drivers we surveyed not jumping at the chance to drive very much further afield. Most are choosing to stay very local indeed or even not getting in the car in the first place, which bodes well for control of the coronavirus.

‘As guidance on movement hasn’t changed much in either Scotland or Wales, English drivers should regard the borders to these countries as effectively closed for leisure trips or potentially face a fine.’

The Prime Minister told the nation last Sunday in a televised address that the partial lifting of lockdown in England will allow people to drive as far as they want to exercise outdoors.

However, they have been instructed not to spend the night away from their homes, in order to minimise social contact with friends and relatives and keep to social distancing guidance.

Under government plans to restart the engines of UK plc, the British public are not indefinitely confined to their homes and are allowed to go outside more than once per day. 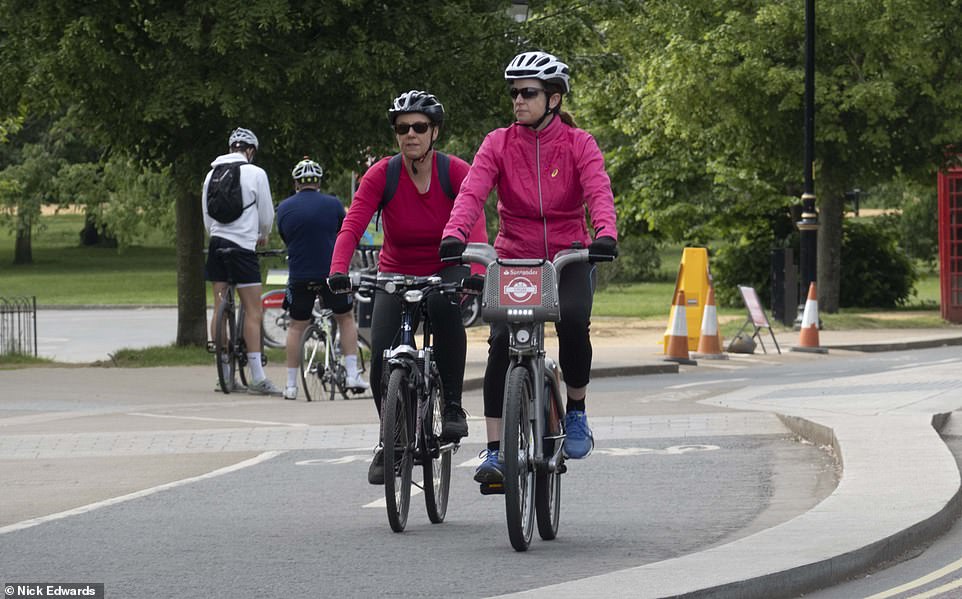 Today marks the first weekend of eased lockdown restrictions, and it is anticipated that the British public will rush outdoors to enjoy expected good weather in England and Wales (pictured, cyclists in Hyde Park, London today) 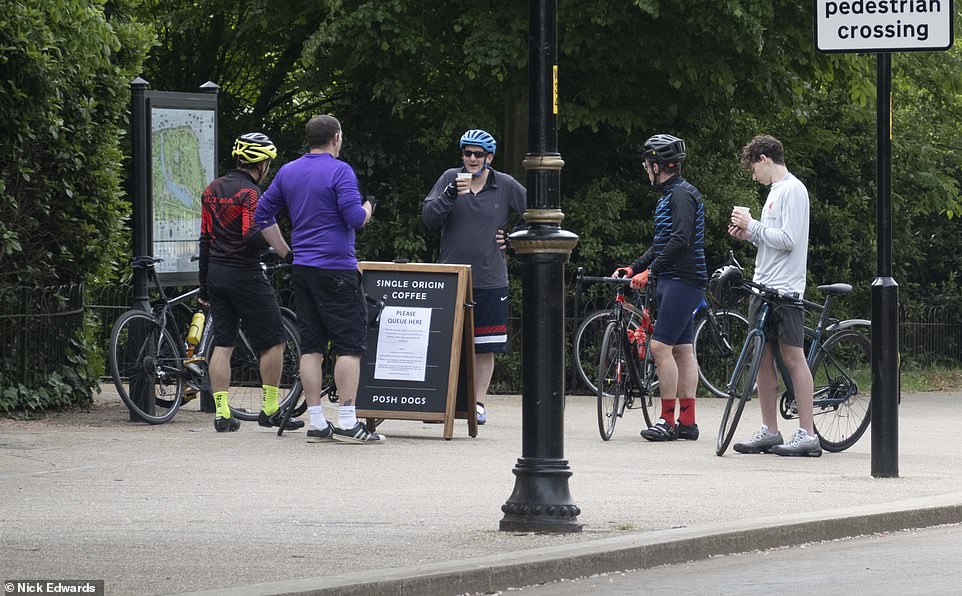 Under government plans to restart the engines of UK plc, the British public are not indefinitely confined to their homes and are allowed to go outside more than once per day (pictured, cyclists in Hyde Park, London today) 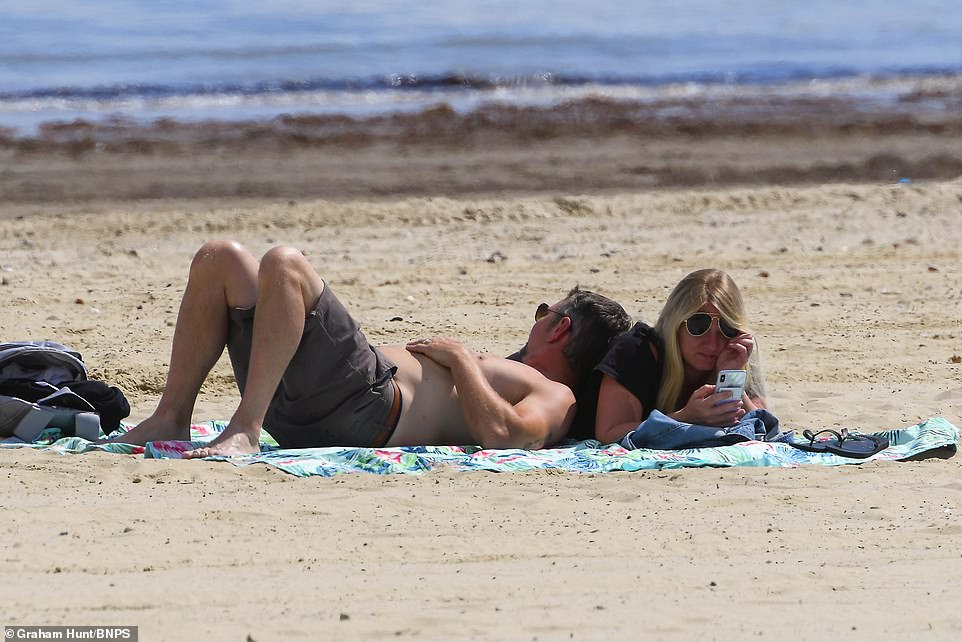 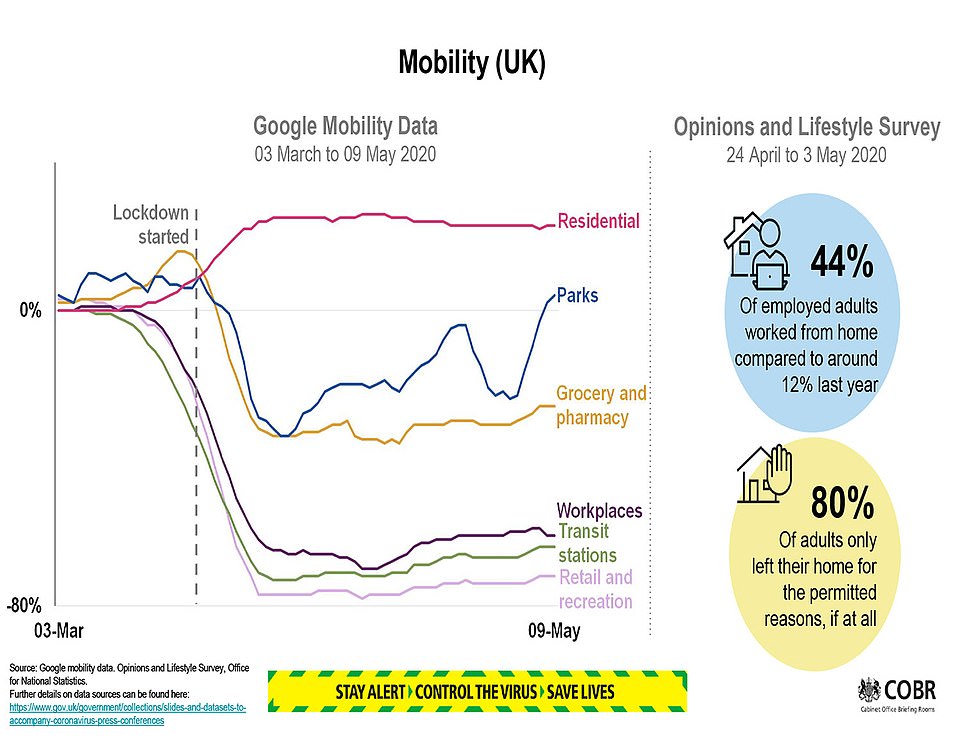 Lockdowns could be eased regionally, Number 10 admitted on the back of promising data that suggested just 24 people a day are being struck down with the coronavirus in London.

Downing Street ‘s official spokesperson revealed some of the government’s strict measures to curb the spread of COVID-19 could be eased ‘at different rates in different parts of the country’.

It comes after an analysis conducted by Cambridge University and Public Health England (PHE) experts suggested the disease could be eradicated in the capital within weeks at the current rate of transmission.

And the data – which was fed into No 10’s scientific panel SAGE – estimated up to 20 per cent of Londoners have already been infected. The rate across England is thought to be around 12 per cent.

But the same data also showed the crucial R rate – the average number of people an infected patient passes the virus on to – in London, as well as every other region had already fallen before lockdown on March 23. It suggested the government’s social distancing measures introduced a week before, which saw public transport use plummet and millions of Brits work from home instead of risk travelling, slowed the crisis.

The Cambridge-PHE data prompted some MPs to urge the government to commit to lifting lockdown on a region-by-region basis, with one urging ministers to consider it ‘from a health perspective’.

They are obliged to observe the 2m (6ft 6in) distance and wear face masks in public places, especially if using public transport to get back to work.

Social distancing measures remain in order to prevent a second potential outbreak of infections by keeping the coronavirus reproduction (R) rate of 0 below 1.

Fears of a second wave of infections caused by a sudden and drastic easing of tough lockdown restrictions are running high, with government scientists urging the public to practice self-restraint.

‘The change is a relatively small one but it just emphasises how careful we’ve got to be in allowing people to reduce their social distancing,’ Sir Mark explained. ‘It reflects a number of different factors, and is one of the reasons that the ONS survey is so important because that’s now measuring cases in the community before they get to hospital.

‘What that shows is that looking at a sample of just under 5,000 households – more than 10,000 people – about a quarter of a percent of people across England had coronavirus during a two-week period.

‘That sounds like a small percentage, it’s about one in 400 people. But actually if you multiply that across the country, then it suggests around 150,000 people with that virus during that two week-period, and that shows the scale and the distribution of the virus.

‘And so it does mean that as measures are taken to relax social distancing, they’ve got to be – as the government has said – taken very very cautiously indeed and it’s why continuously measuring estimates of that reproduction number is so critical.There’s no question the prospect of a second wave still exists, that is undoubtedly the case and that will continue to exist whilst there is still a significant number of cases out there. The whole point about the doubling in time is that it means the numbers go up very quickly indeed potentially. 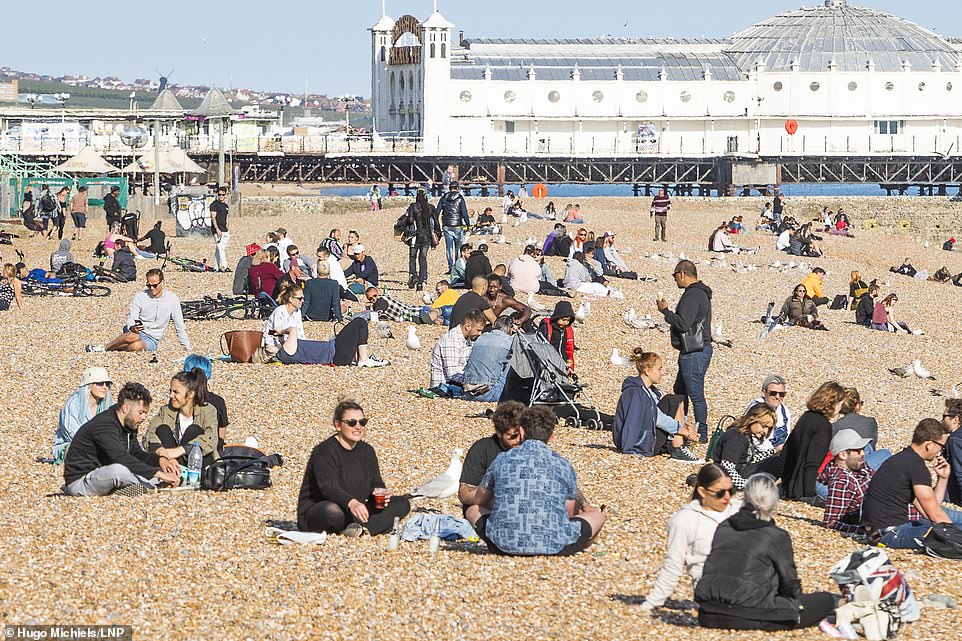 People on the beach in Brighton and Hove yesterday. Today marks the first weekend of eased lockdown restrictions 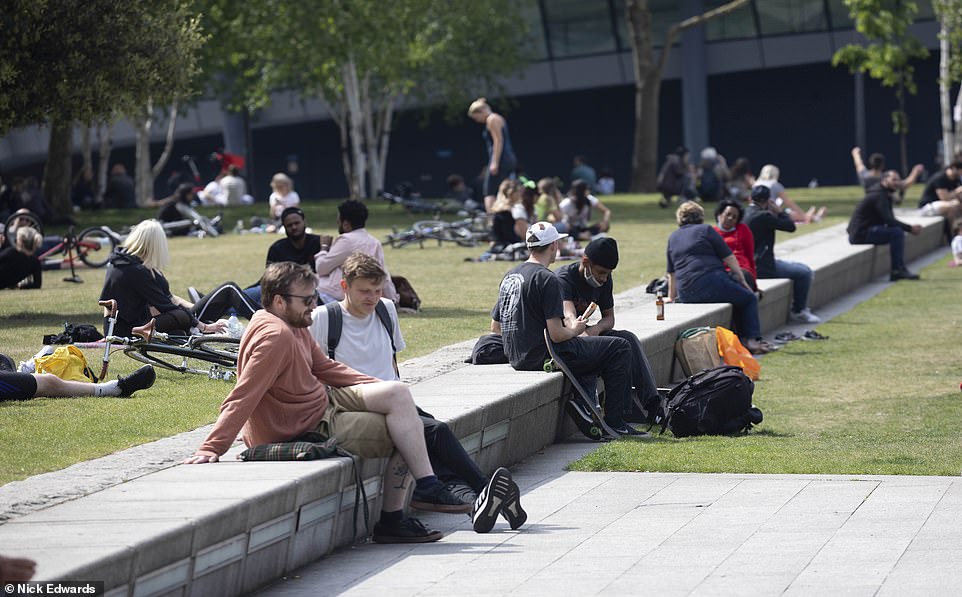 People enjoy the sunny weather at Potters Field near Tower Bridge in London yesterday. Boris Johnson has said the public should be encouraged to head back to work if they can’t work from the home, as the lockdown is gradually eased 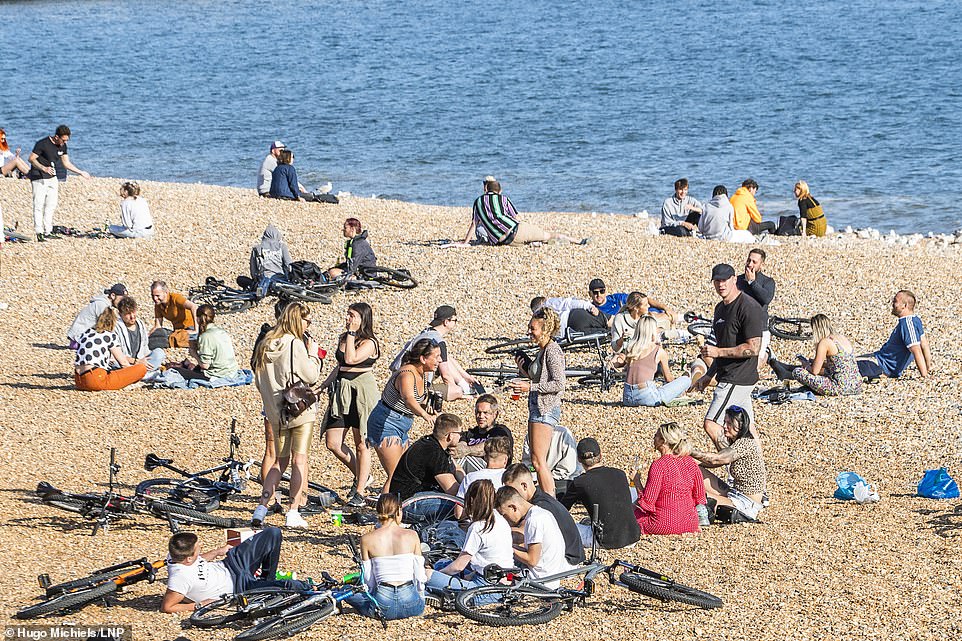 Members of the public take a trip to the beach in Brighton and Hove as the lockdown is relaxed across the UK. Climbing temperatures pushing 70F (21C) are likely to tempt millions more outdoors this weekend

‘We’re starting with a very very widely distributed infection, and it’s why in this phase of the disease that testing, tracking and tracing is going to be so absolutely critical.

‘So it’s a combination of people really being careful about how they behave coupled with identifying cases as early and as rigorously by testing as possible, and then working out who their contacts have been and making sure they do isolate themselves.’

He continued: ‘It is absolutely clear that releasing the measures does depend on keeping that 0 – that reproduction number – below that number of 1. If the number goes above 1, it means each infected person is on average infecting more than one person themselves, and that means the numbers goes up.

‘If the number is less than 1, then they’re infecting less than one person each and that means the pandemic is gradually coming under control.’