The heavily-tattooed Trump supporter who sported horns, a fur hat and face paint and occupied the Senate dais moments after Vice President Mike Pence delivered his rebuke to Donald Trump has been revealed to be an Arizona-based QAnon believer who used to promote himself as a singer and actor.

Jake Angeli, 32, often known as the QAnon Shaman, has become a fixture at recent right-wing rallies while decked out in his signature attire.

One of his tattoos is said to show the symbol of Wotanism, an acronym for ‘Will of the Aryan Nation.’

Dr Adam Rutherford tweeted: ‘I know this jamiroquoi wannabe muthaf***a is kinda funny but his tattoo is the symbol of Wotanism, which is a Nazi/Odin occult that believes Jews control the government, the Holocaust is exaggerated and champions the 14/88 slogan. He’s a real card-carrying Nazi.’

Angeli was at the front of a group of agitators who broke into the Capitol and faced off with DC police who desperately tried in vain to protect the establishment.

He then made his way into the Senate chamber where he was seen shouting and posing for photos.

Angeli flexed his left arm as he stood behind the dais in the Senate chamber where just moments earlier Vice President Mike Pence and Nancy Pelosi had stood. 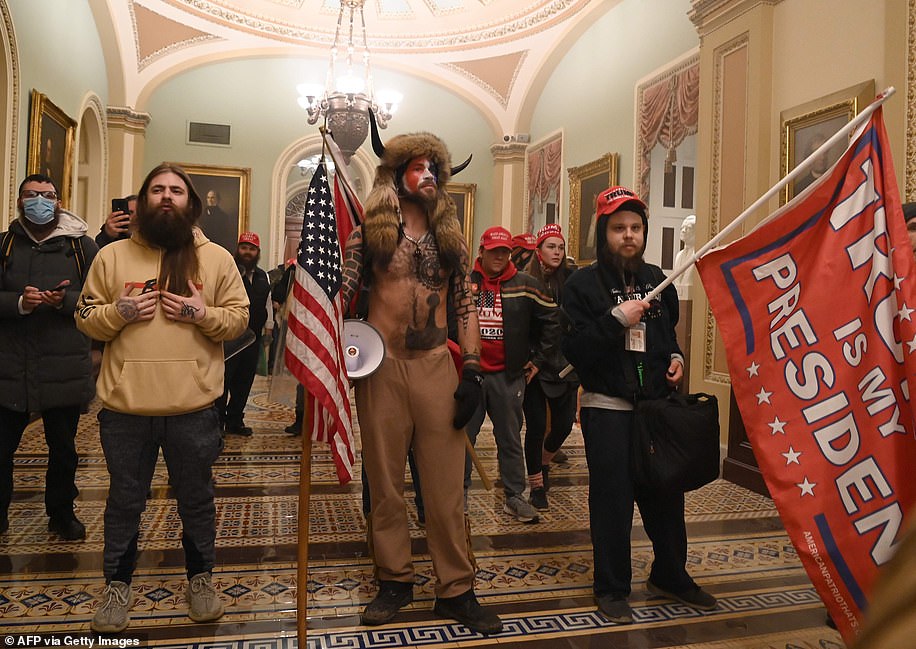 He was flanked by an American flag and his fellow rioters took photos of him on their smartphones.

The ‘Qanon Shaman’ was also seen screaming in the chamber and clutching a megaphone.

Angeli has become a prominent figure at pro-Trump rallies, always sporting his signature outfit of fur, horns, face paint and bare chest, where he has spouted off about QAnon conspiracy theories.

Most recently he has been active at Arizona rallies calling for the results of the presidential election to be overturned, after Trump has refused to concede and pushed unfounded claims of voter fraud ever since he lost to Joe Biden.

At a pro-Trump rally at the Arizona State Capitol in February, he held aloft a banner reading ‘Q Sent Me’ in reference to QAnon.

He was also seen at reopen Arizona rallies protesting against lockdowns put in place to slow the spread of COVID-19.

In one photo posted on his Facebook account in November, where he calls himself Yellowstone Wolf, Angeli is seen shaking hands with Rudy Giuliani, Trump’s personal attorney – who hours before the violence kicked off encouraged supporters to pursue a ‘trial by combat’.

He has also posted about numerous conspiracy theories including a video claiming there is a ‘globalist plot for world domination thru the plandemic & its numerous different agendas’.

Angeli has previously admitted his belief in QAnon started after reading conspiracy theories on the internet.

‘At a certain point, it all clicked in a way,’ he said in an interview in February, reported AZCentral.

QAnon is the debunked extreme right wing conspiracy theory that claims Satan-worshipping pedophiles are plotting against Trump and are running a global child sex trafficking ring.

An undated profile for Angeli on Backstage.com shows the 32-year-old was a singer, screenwriter and actor.

Meanwhile, the insurrectionist who brazenly put his feet on House Speaker Nancy Pelosi’s desk in her office is now known to be a 60-year-old Arkansas man who claims he will run for Arkansas governor in 2022 and describes himself as a white nationalist online.

Richard ‘Bigo’ Barnett boasted outside the Capitol following the siege that he ‘wrote [Pelosi] a nasty note, put my feet up on her desk and scratched my balls’.

A photo from Pelosi’s office showed another threatening note on her desk reading ‘we will not back down’. 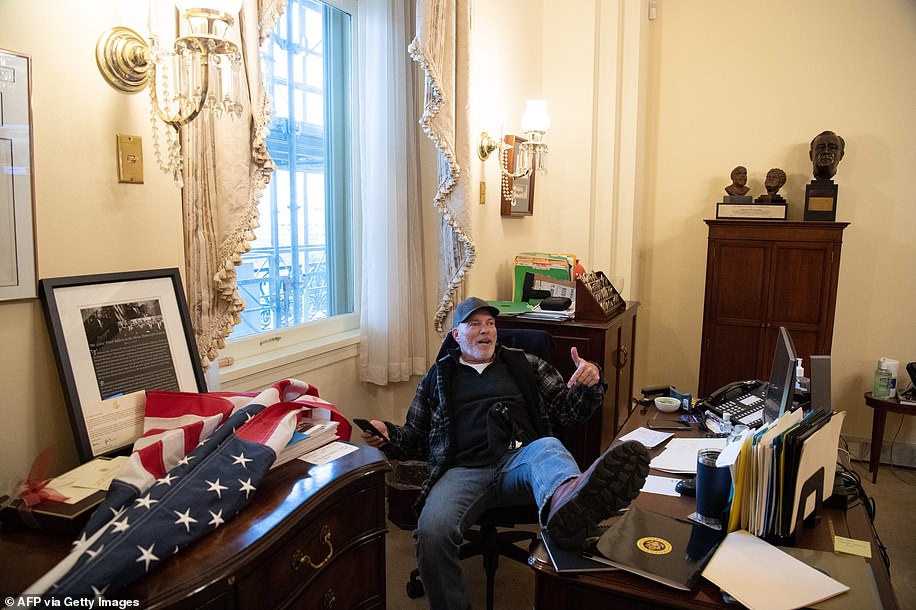 In Pelosi’s office, 60-year-old Barnett posed for a photo reclining in the House Speaker’s chair before he later returned to the crowd of supporters outside and flashed a hand-written envelope he had looted 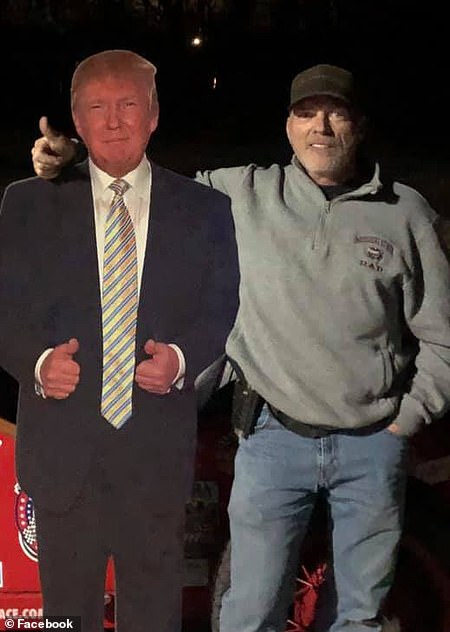 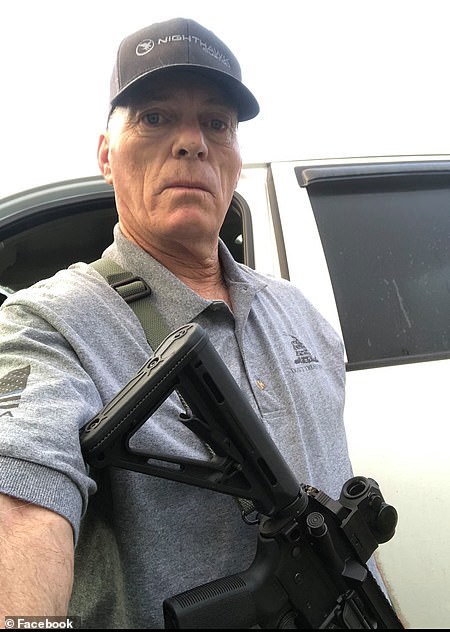 In one selfie on his Facebook page, Barnett is seen posing with a semi-automatic rifle

Meanwhile, in Pelosi’s office, Barnett posed for a photo reclining in the House Speaker’s chair before he later returned to the crowd of supporters outside and flashed a hand-written envelope he had looted.

It later emerged Barnett is an independent contractor and was the recipient of a $9,300 PPP loan as part of a COVID relief package, The Daily Dot reports.

Barnett later told the New York Times reporter Matthew Rosenberg he ‘fell’ into Pelosi’s office as he showed off the personalized envelope which was addressed to The Honorable Billy Long and had Pelosi’s signature on it.

‘I didn’t steal it,’ he claimed, saying he ‘left a quarter on her desk’.

‘And I left her a note on her desk that says ‘Nancy Bigo was here you b**ch’.’

He also denied storming her office, claiming he politely knocked on her office door and was pushed in by other protesters.

‘I’ll probably be telling them this is what happened all the way to the DC jail,’ he said.

In a November post on Facebook, where he goes by the alias George Reincarnated Patton, Barnett claimed he will run for governor of Arkansas in 2022 saying he will ‘be running on the COMMON SENSE platform’.

He has also shared images of the Gadsden flag snake – which is regarded as a racist symbol – and boasts of being a white nationalist.

In several photos, he is seen posing with semi-automatic rifles.

Another of the mob was Tim Gionet, an online personality known as Baked Alaska who is described by the Southern Poverty Law Center as a white nationalist who was involved in the far-right Charlottesville rally in 2017. 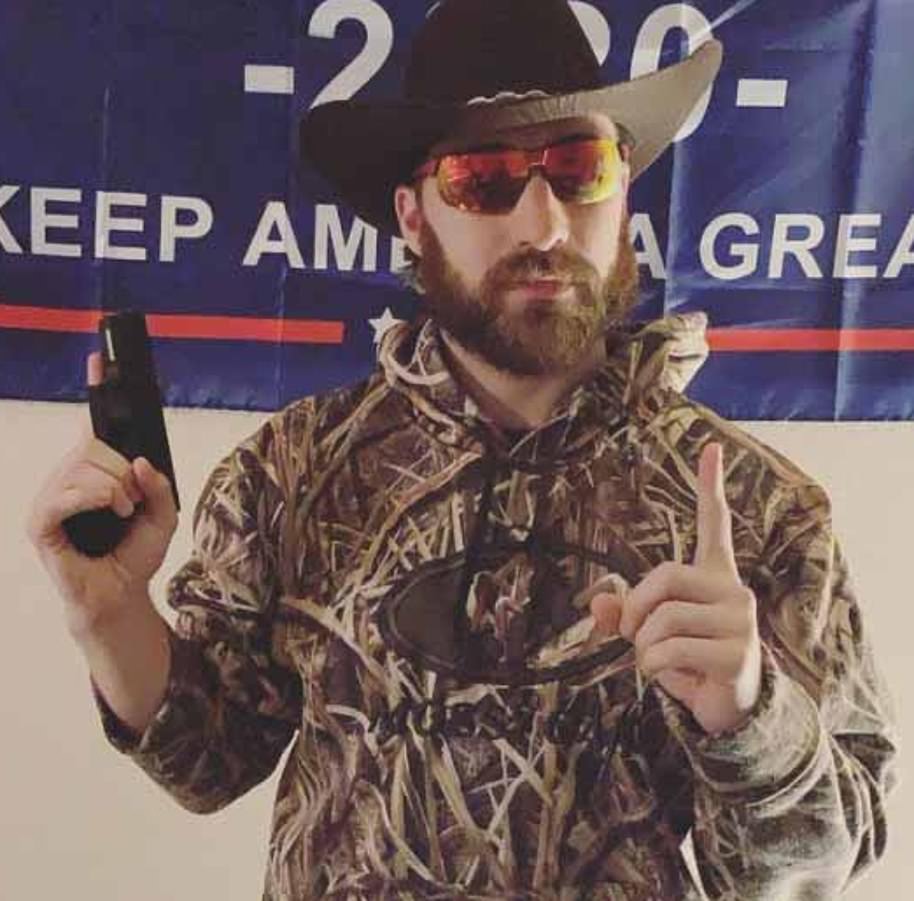 Another of the mob was Tim Gionet, an online personality known as Baked Alaska who is described by the Southern Poverty Law Center as a white nationalist who was involved in the far-right Charlottesville rally in 2017 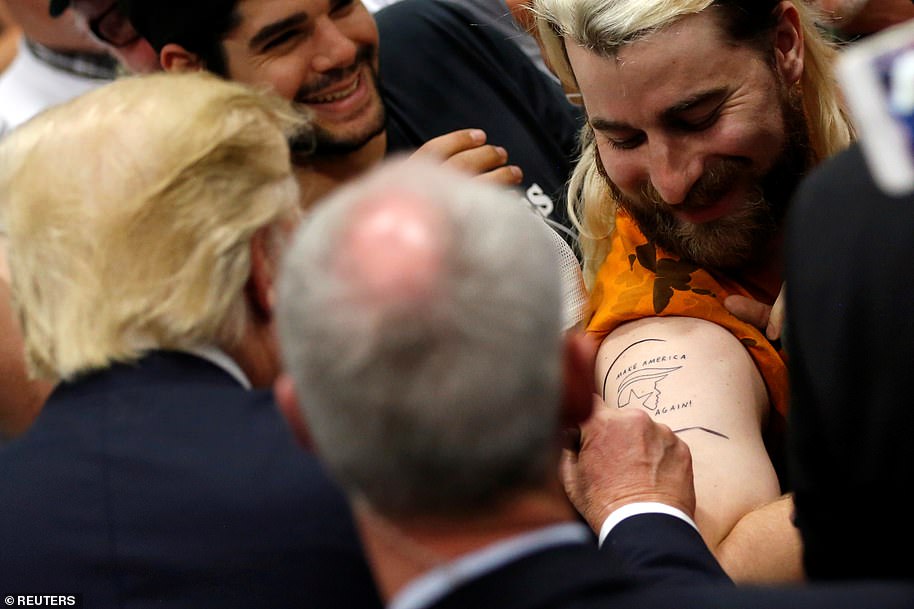 Gionet posted video that showed Trump supporters in ‘Make America Great Again’ and ‘God Bless Trump’ hats milling around and taking selfies with officers who calmly asked them to leave the premises.

The Trump supporters talked among themselves, laughed, and told the officers and each other: ‘This is only the beginning.’

Even elected politicians were part of the mob.

Rick Saccone, who ran for a U.S. House seat in 2018 and was once a state lawmaker in Pennsylvania, bragged on Facebook that ‘we are storming the Capitol’ and that ‘our vanguard has broken through the barricades’.

Saccone also told his followers: ‘We are trying to run out all the evil people and RINOs that have betrayed our president. We are going to run them out of their offices.’

He later deleted that post but not before it was seen by his followers, CBS reports. 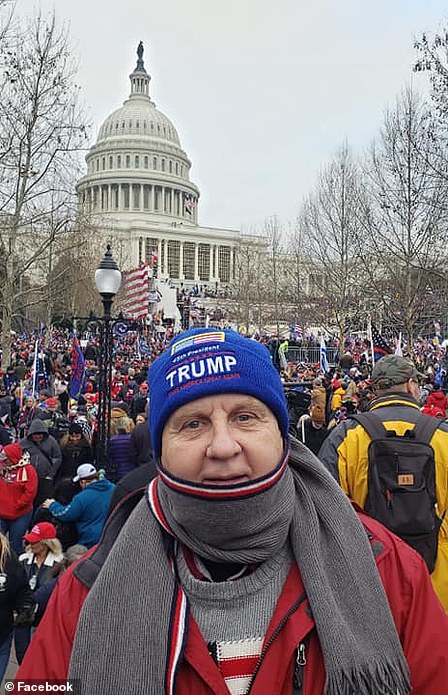 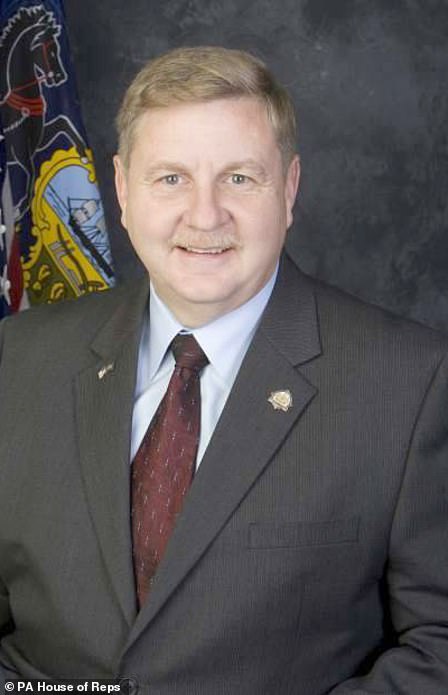 Even elected politicians were part of the mob. Rick Saccone, who ran for a U.S. House seat in 2018 and was once a state lawmaker in Pennsylvania, bragged on Facebook that ‘we are storming the Capitol’

He added: ‘Hello Mr. President, we love you. Keep doing what you’re doing. We’re with you. Until next time, in God we trust.’

In a later Facebook post Saccone said: ‘I see some people are twisting the peaceful protest into something else. Everyone from our group was involved in peaceful, first amendment assembly. It was part of the metaphor to storm the castle so to speak.

‘People that I heard breached some barricades to reach the steps to wave flags. Some carried a huge American flag up the steps which drew a loud roar of approval from the crowd. No one I no of intended or condones any violence unlike those on the left. Did not see any violence but did see some smoke what some said was tear gas being sprayed at people.

‘I cannot imagine anyone being shot for a trespass. The punishment for trespass is not death. My heart goes out to the young lady who was shot. Again, these were hundreds of thousands of peaceful protestors, especially those from Pa. What do you think?’

Derrick Evans, a member of West Virginia’s House of Delegates, streamed live footage from the Capitol as he joined in the march. He later claimed he was ‘simply there as an independent member of the media’. 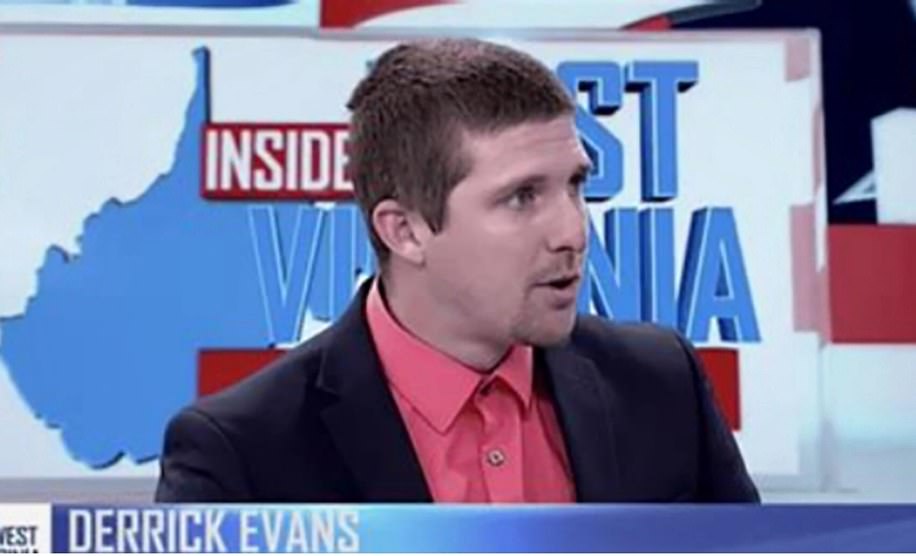 Evans, who calls himself an activist online, later deleted the footage showing him rushing inside with the mob.

‘We’re going in,’ he tells followers.

In other clips he could be heard chanting ‘stop the steal’, The New York Times reports.

Joshua Pruitt is the only person arrested on a felony charge of violating the Riot Act so far, according to the city’s arrest sheet.

The 39-year-old was taken into custody at the Capitol building.

He is reported to have links to the Proud Boy movement, CNN states.

Paul Davis livestreamed his storming of the Capitol to his followers online.

He is understood to have been fired from his job at Goosehead Insurance as a result.

A spokesman for the company told DailyMail.com: ‘His actions are not a representation of or supported by Goosehead in any way. He is no longer employed by Goosehead, An official statement will be released.’ 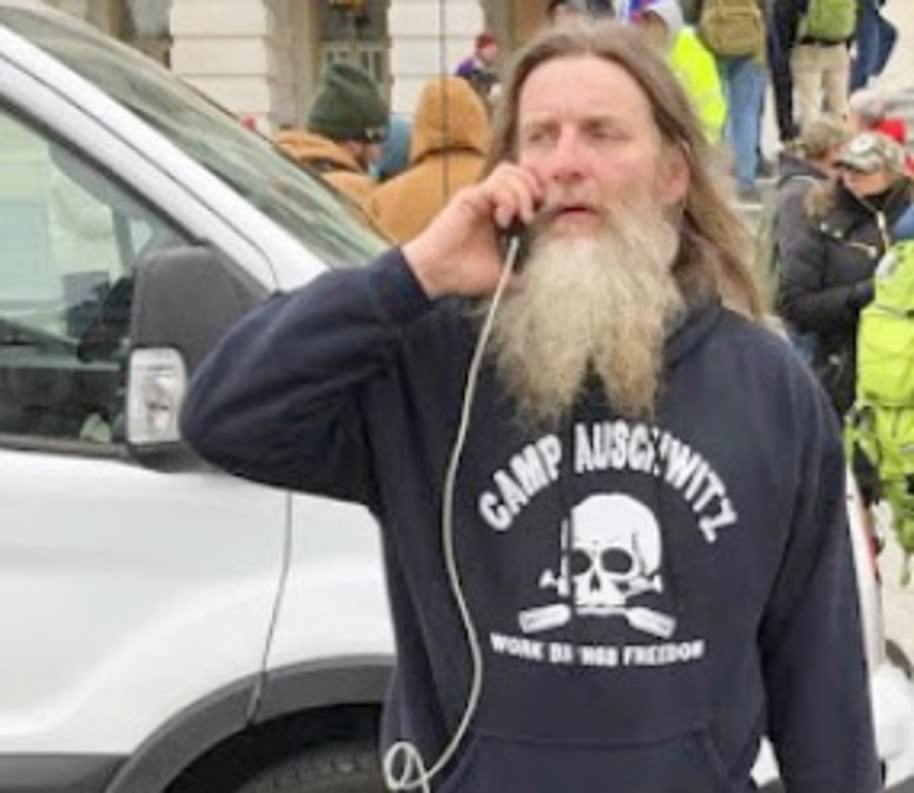 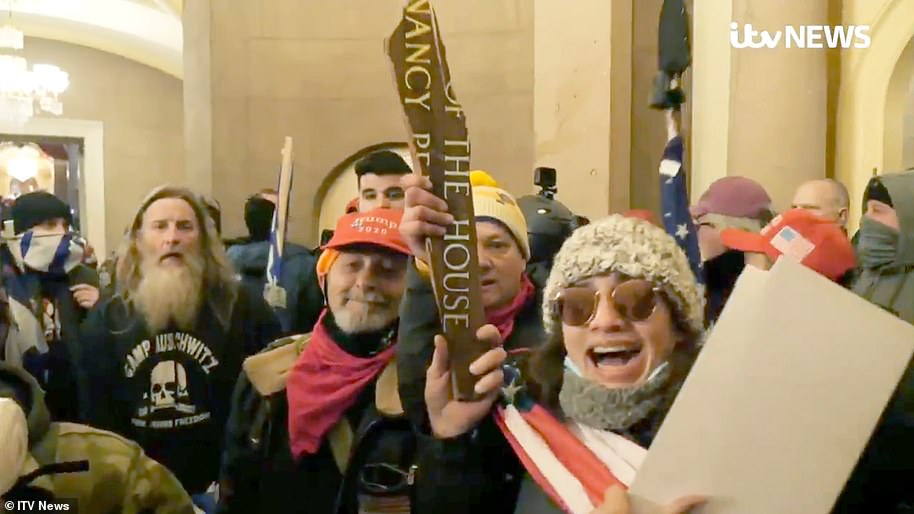 The pro-Trumper wearing a ‘Camp Auschwitz’ shirt, far left, has not been identified. The FBI are asking for helping in finding rioters

Another looter who smiled for a photo as he made off with a lectern has been identified as Adam Johnson – a psychology graduate from Bradenton, Florida. 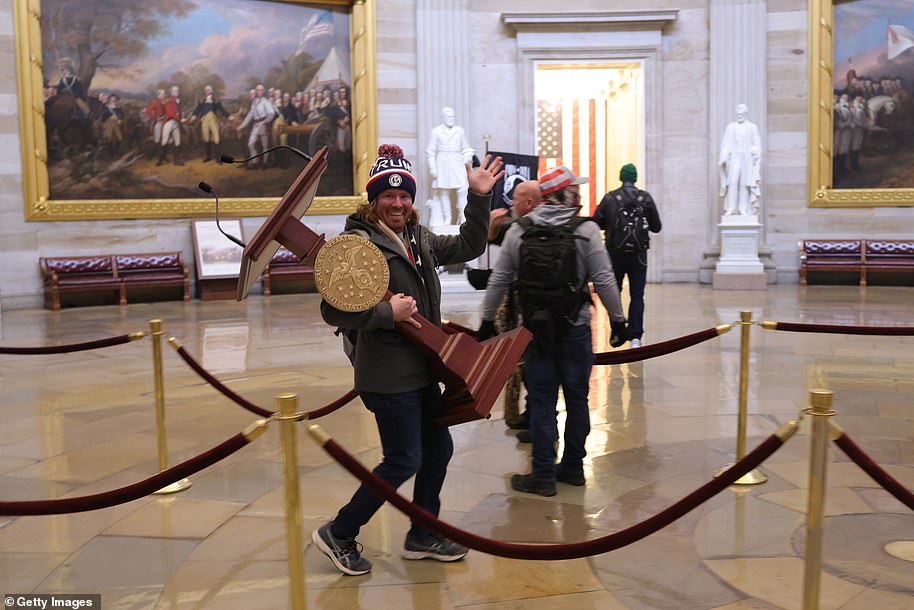 Another looter who smiled for a photo as he made off with a lectern has been named as Adam Johnson – a psychology graduate from Bradenton, Florida

Photos on his now-deleted social media accounts show him posing next to a sign reading ‘closed to all tours’ inside the building.

Johnson, who was pictured inside the Capitol making off with a lectern, appears to have removed his social media platforms in the aftermath of the siege.

Schaffer, 52, warned in an interview last year: ‘They will go down. They’re messing with the wrong people, believe me.’

Outside the chaos in the capitol, another vocal Trump supporter Leigh Ann Luck, dressed up as the Statue of Liberty as she shouted in protest against Biden’s victory. 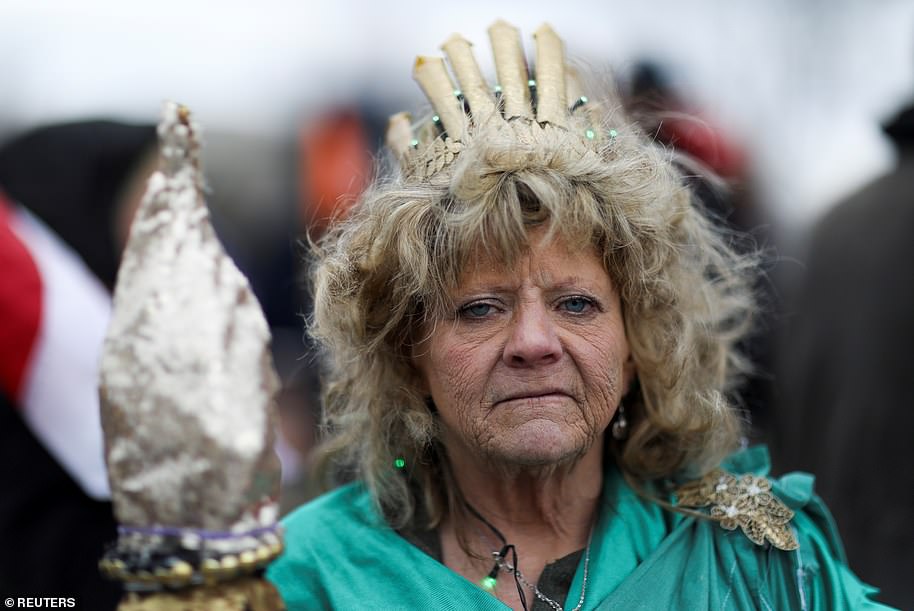 The National Guard was deployed to help police enforce a 6pm curfew in DC. Hundreds of protesters remained on the Capitol grounds after the curfew went into effect and Mayor Muriel Bowser refused to say if violators would be arrested.

Earlier in the evening, President-elect Joe Biden called for the ‘mob to pull back’ and said the uprising bordered on sedition.

Trump – after remaining silent for much of the afternoon – posted a video telling his ‘very special’ supporters inside the Capitol that he loves them and understands their pain but urged them ‘to go home’.

He had initially encouraged his supporters to march to the Capitol after a rally earlier in the afternoon before asking them only to remain peaceful when violence broke out.