On Wednesday, the Justice Department demanded documents from 23 ‘sanctuary cities’ in an effort to see if those jurisdictions are withholding information from federal authorities. The DOJ has threatened to subpoena the information if the municipalities do not comply.

‘I will NOT be attending today’s meeting at the White House after @realDonaldTrump’s Department of Justice decided to renew their racist assault on our immigrant communities,’ de Blasio fumed in a tweet. ‘It doesn’t make us safer and it violates America’s core values.’ 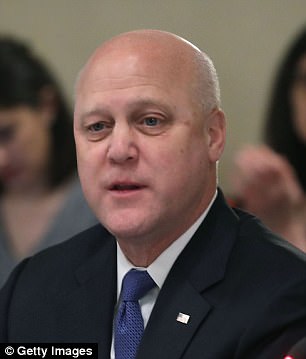 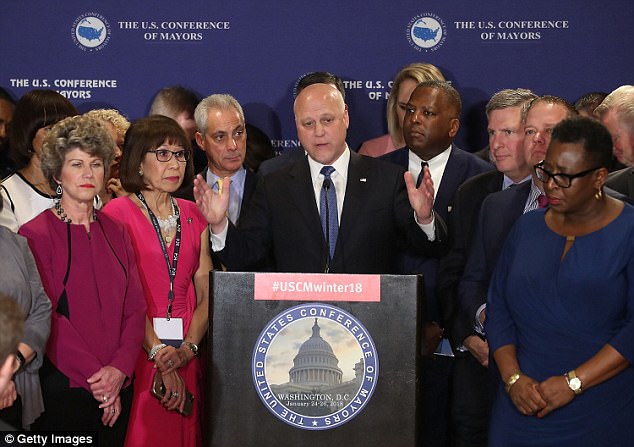 Mitch Landrieu (center), the Democratic mayor of New Orleans, is among the city leaders in Washington, D.C. for the 86th Winter Meeting of the US Conference of Mayors

Landrieu, who is among those gathered at the US Conference of Mayors meeting in Washington, D.C., this week, told reporters that he wouldn’t go to the meeting under ‘false pretenses,’ according to CNN.

Originally, the meeting between the mayors and President Trump was supposed to focus on infrastructure, an issue that the president campaigned on in many of the Rust Belt states that he won.

Landrieu complained that the immigration order changed the dynamic.

‘An attack on one of our cities’ mayors  who is following the Constitution is an attack on all of us,’ Landrieu said. ‘I will not be attending that meeting.’

New Orleans was not among the 23 municipalities targeted, but New York City was.

Republican Mayor Elizabeth Kautz of Burnsville, Minnesota, also said she would not attend the White House meeting due to the Justice Department’s order.

Kautz is a former president of the US Conference of Mayors.

Walters called the mayors’ refusal to break bread with Trump a ‘political stunt’ saying they chose to do that instead of ‘participating in an important discussion with the president and his administration.’

At Wednesday’s press briefing Press Secretary Sarah Huckabee Sanders said that while the White House would like to work with U.S. mayors on issues like infrastructure, the federal government can’t allow individuals to break the law.

‘We cannot allow people to pick and choose what laws they want to follow,’ she said.

Acknowledging the throngs of reporters in the briefing room she offered that, ‘you guys wouldn’t be allowed to do that in your own networks and outlets and the federal government cannot allow people to act independently and completely ignore the law.’

‘The White House has been very clear that we don’t support sanctuary cities, we support enforcing the law and following the law and that is the Department of Justice’s job to do exactly that,’ Huckabee Sanders said. ‘And if the mayors have a problem with that they should talk to Congress, the people who passed the laws.’