A stuffed dog has taken the internet by storm and won itself a legion of followers.

Mitch Byers, from Portland, Oregon, posted a picture of his taxidermied dog Phoebe and it spread like wildfire across social media.

The photo that kicked it all off was of the Jack Russell – which died in 2013 – in the passenger seat of Mitch’s car.

Mitch Byers from Portland, Oregon, pictured with his dead dog Phoebe, started posting images online of his former pet getting up to various adventures 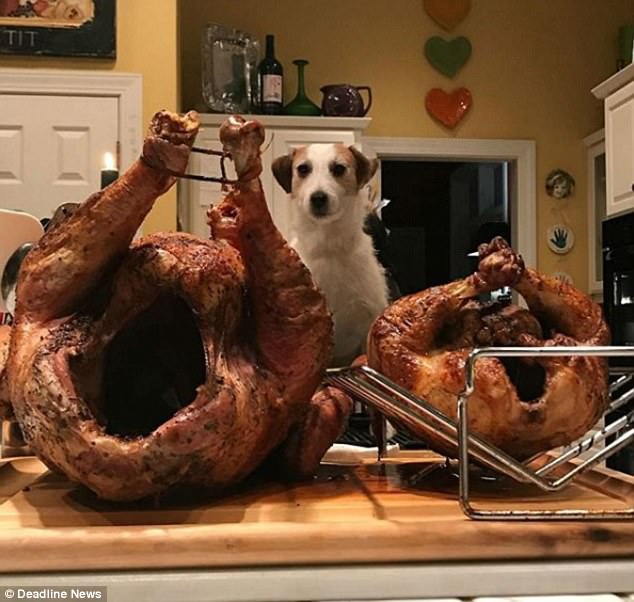 Despite having died four years ago, Phoebe still gets involved in major family events 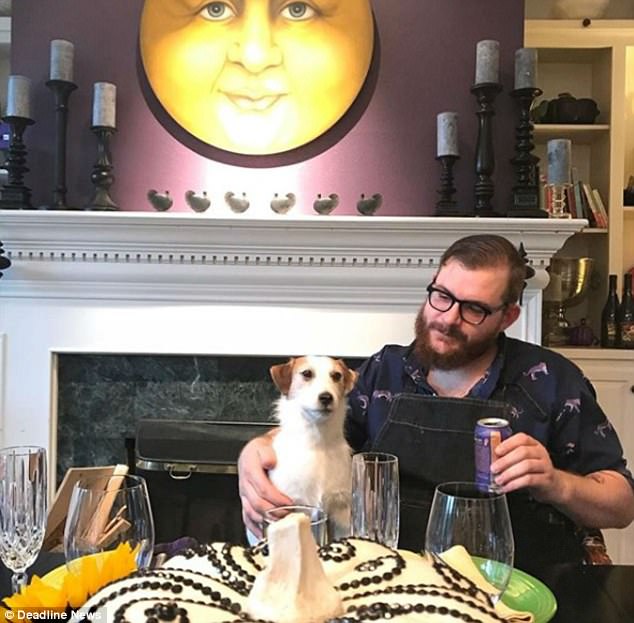 The 26-year-old rubber factory manager had put a sign in the window that read: ‘Don’t worry, the dog is already dead. She’s taxidermied. Please don’t break my window.’

He set up an instagram called ‘My dead dog and me’ after the picture went viral, and now has over 1,700 followers.

Social media users have had a mixed reaction to the dog, with some calling it ‘wrong’ and others ‘awesome’.

His mother had Phoebe sent to a taxidermist in Colorado, as the ones she contacted in Oregon refused to do family pets.

She kept the whole thing a secret from the family, but after four years the dog is still a big part of the family and gets involved in all sorts offestivities. 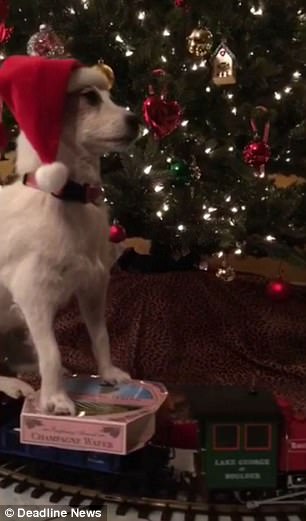 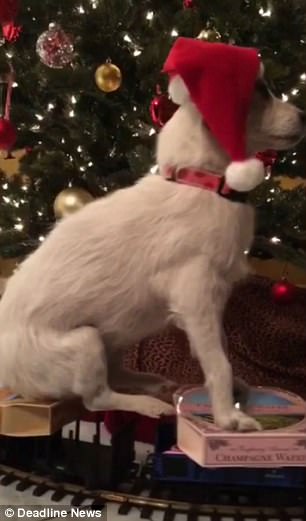 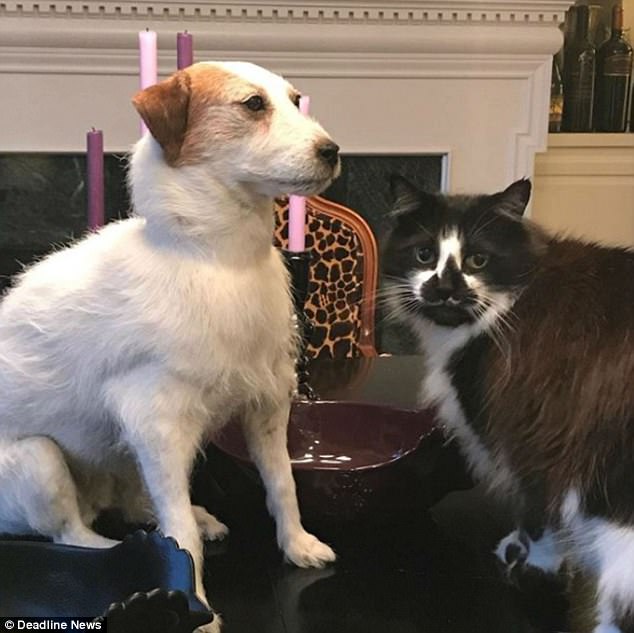 The cat on the right is still alive, but does not seem perturbed by the dead dog

Mr Byres posted pictures of Phoebe ‘helping’ with Thanksgiving dinner, clad in a Christmas hat and dressed up for Halloween.

He even posted a video of the Jack Russell sitting on top of a toy train set going past the families Christmas tree – complete with Santa hat and jacket.

The 26-year-old also took Phoebe into a bar one day in Oregon, and snapped a selfie with her and a pint.

The pair’s adventures have stirred a mixed reaction among social media users, with many fawning over the dead dog.

Triciakennedy17 said: ‘I don’t know how I feel about this. ? I want to laugh, yet I want to cry.

Samisarcastic said: ‘I love this.’

Murrrrrrrrrrdith added: ‘That’s awesome. Thank you for sharing. I got a good laugh out of the few pics you have posted. Can’t wait for more.’ 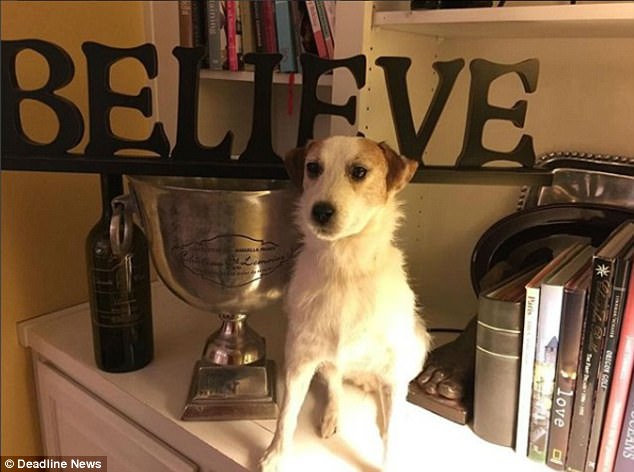 While hannahcatlady pondered: ‘Is it bad that I love this?’

However, other social media users were not so sure.

Diligentlydoubtful said: ‘What the heck?’

Divanyaraujov added: ‘This is so wrong.’

While Turnip-my-beets asked ‘Is this dog actually dead?!?’ 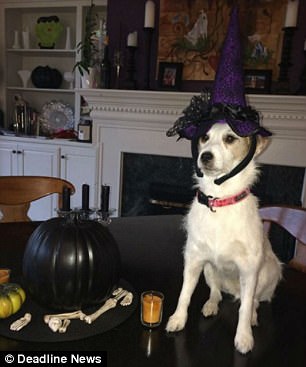 Some people have not been impressed by Phoebe’s internet fame

However, Mr Byers isn’t fazed by the mixed reaction and hopes he’s inspiredmore people to get their precious pets taxidermied.

Phoebe sitting on the table looking right at him. He said: ‘I instantly cracked up, as I knew this is exactly the sorta thing my mom would do.

‘My sister however, took one look at her and started to ball her eyes out, which I guess is a better reaction than laughing.’

He said the funniest run-in in he had had so far was when he took Phoebe into a truck stop on the Oregon Coast.

When he asked if he could bring her in, the bartender looked confused, but conceded after hearing stories about the pooch.

He added: ‘Before I knew it I met lots of pretty cool people and swapped stories about all sorts of items.

‘Everyone absolutely loved her. I think I even convinced a few people to taxidermy their own dogs when the time comes.’

Earlier this year a woman from Dundee posted an unusual advert for her dead dog Snoopy on Facebook marketplace.

The bizarre ad read: ‘Had our dog turned into a rug when he died. Treasured family pet. Has to be sold as new dog keeps trying to hump it. Looking for £100 ONO. Very cosy and unusual piece.’ 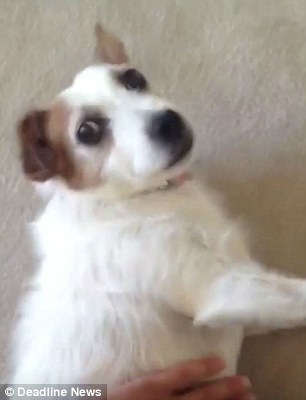 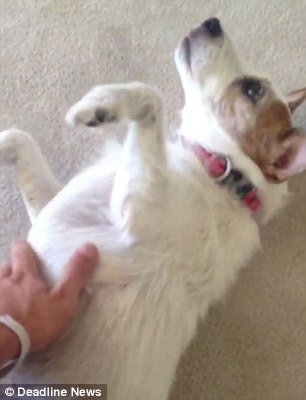