What makes the tome particularly intriguing is the sheer variety of burial sites explored.

As the publisher says: ‘Some, such as communist leaders Ho Chi Minh and Vladimir Lenin, are interred in great mausoleums, where they are visited by millions each year; others are buried in little-known country graveyards.

‘The book provides a guide to some of the most famous and unusual graves of the great and the good.’

The book features 150 photographs of graves, cemeteries, graveyards and mausoleums. Here we present 20 of them with captions courtesy of the author.

MARILYN MONROE, 1 JUNE 1926 – 4 AUGUST 1962, WESTWOOD VILLAGE MEMORIAL PARK, LOS ANGELES: The book reveals that the arrangements for Marilyn Monroe’s funeral were made by her former husband Joe DiMaggio, whom she had divorced seven years previously. ‘It was he who chose the Westwood Village Memorial Park in Los Angeles (pictured) as her final resting place and ordered red roses to be placed at her crypt three times a week for the next 20 years,’ says Horne. He adds: ‘The understated memorial is typically adorned with lipstick traces from visitors’ kisses’ 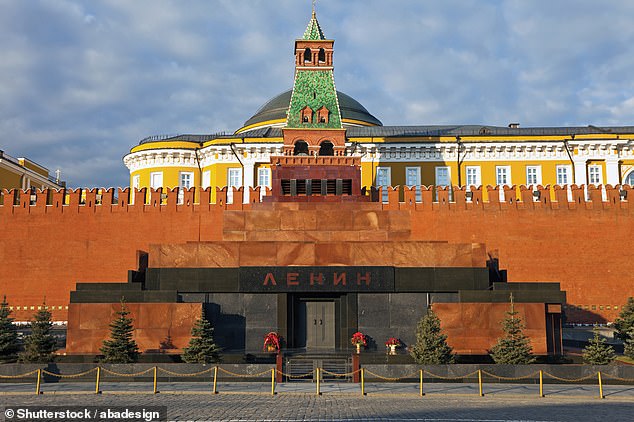 VLADIMIR LENIN, 22 APRIL 1870 – 21 JANUARY 1924, MOSCOW, RUSSIA: Horne explains that the embalmed body of Vladimir Lenin, the founder of the Soviet Union, has been on display in Moscow’s Red Square almost continuously since his death in 1924. Since 1930 it has resided in the red granite Mausoleum (above) designed by architect Konstantin Melnikov. ‘Stalin’s body lay alongside Lenin’s for several years but was later removed,’ says Horne 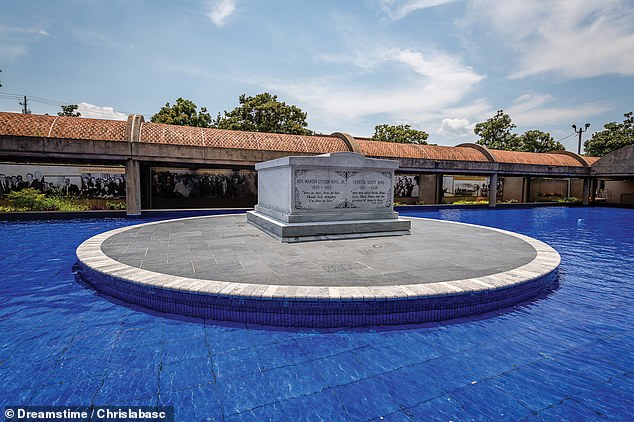 MARTIN LUTHER KING JR, 15 JANUARY 1929 – 4 APRIL 1968, MARTIN LUTHER KING JR CENTER, ATLANTA, GEORGIA: ‘Born into a Baptist Atlanta family in 1929, Martin Luther King Jr was the most celebrated civil rights leader of the 1950s and 60s,’ writes Horne. ‘Following his assassination in April 1968 by the escaped convict James Earl Ray, King was first buried in Southview Cemetery before being moved to the grounds of what is now the King Center in Atlanta (pictured), a site that includes both the home in which he was born and the Ebenezer Baptist Church where he preached. The King Center was founded by his widow, Coretta Scott King, who was buried alongside him in 2006 in a crypt made from Georgia marble’ 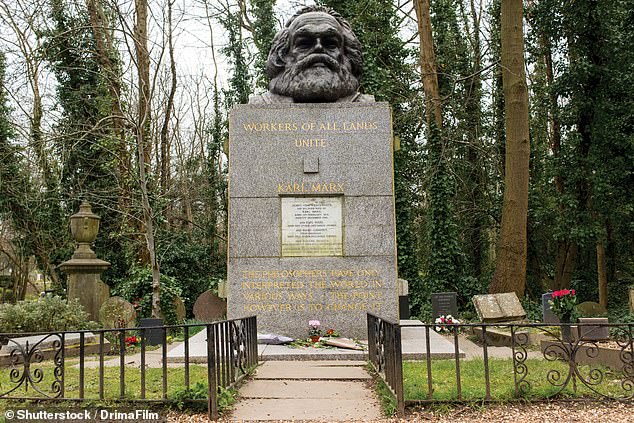 KARL MARX, 5 MAY 1818 – 14 MARCH 1883, HIGHGATE CEMETERY, LONDON: Horne explains that the grave of the revolutionary German philosopher and historian (pictured) is marked by a bronze bust. ‘It has been repeatedly vandalized and has twice been bombed,’ he adds 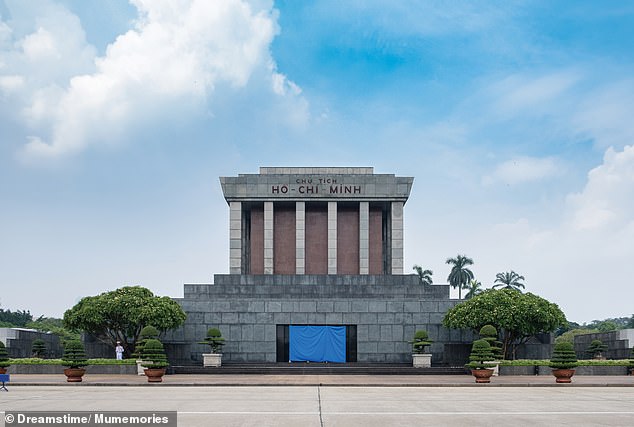 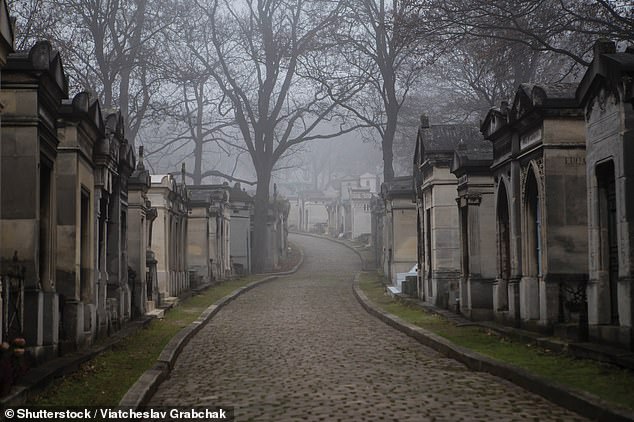 PERE LACHAISE CEMETERY, PARIS: ‘Established by Napoleon in 1804 in one of his first acts as emperor, Pere Lachaise is now the largest and best known of Paris’s many cemeteries,’ says Horne. ‘Few burials took place in its first year, however, and it was not until the remains of the writers Jean de La Fontaine and Moliere were moved there that the cemetery became popular’ 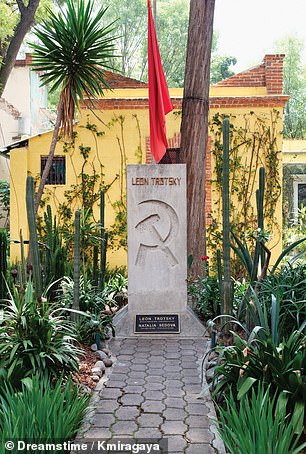 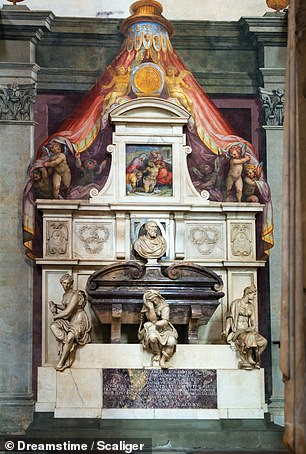 LEON TROTSKY, 7 NOVEMBER 1879 – 21 AUGUST 1940, COYOACAN, MEXICO CITY, MEXICO (LEFT): ‘The Ukrainian-Russian revolutionary Leon Trotsky had survived several assassination attempts before his murder with an ice pick at the hands of the NKVD agent Ramon Mercader, on the orders of the Soviet leader Josef Stalin,’ says Horne. ‘Decorated with the communist hammer and sickle, Trotsky’s grave stands in the grounds of the house in Coyoacan, Mexico City, where he spent his final years. The house has been converted to a museum dedicated to his life. On his release from a Mexican prison, his assassin was later awarded the Order of Lenin and Hero of the Soviet Union Gold Star by Leonid Brezhnev, one of Stalin’s successors.’ MICHELANGELO, 6 MARCH 1475 – 18 FEBRUARY 1564, BASILICA DI SANTA CROCE, FLORENCE, ITALY (RIGHT): ‘The Florentine sculptor, painter, architect and poet Michelangelo is perhaps best known for the two frescoes he painted for the Sistine Chapel: the scenes from Genesis on its ceiling, and The Last Judgement on its altar wall,’ writes Horne. ‘Michelangelo spent the final three decades of his life in exile in Rome and he was initially buried in the Santi Apostoli church there after a modest funeral. Shortly afterwards, however, his body was moved to Rome by his heir Leonardo – smuggled within his belongings – and reburied in the Basilica di Santa Croce in Florence, where this impressive tomb, designed by his good friend Giorgio Vasari, now stands in his memory’ 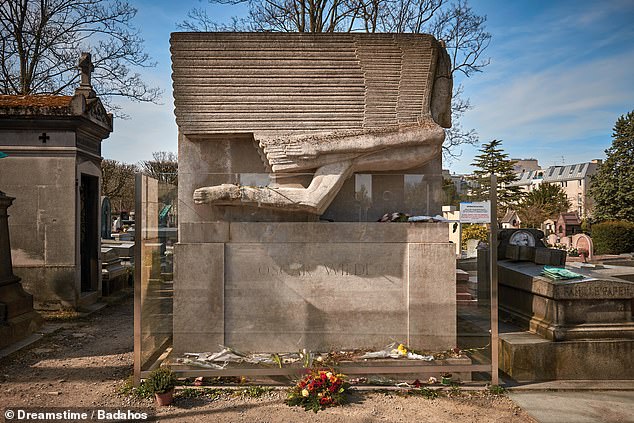 OSCAR WILDE, 16 OCTOBER 1854 – 30 NOVEMBER 1900, PERE LACHAISE CEMETERY, PARIS: Horne reveals that Wilde’s grave is carved from a 20-tonne block of limestone by sculptor Jacob Epstein. ‘The flying naked winged figure that adorns the grave has suffered repeatedly from vandalism since its unveiling in August 1914,’ he says. ‘Intimate parts of the figure’s anatomy were chipped off in 1961 and reportedly used as a paperweight, while the tendency of visitors to write graffiti on the monument or kiss it wearing lipstick led to the placing of a glass barrier around the lower part of the tomb in 2014’ 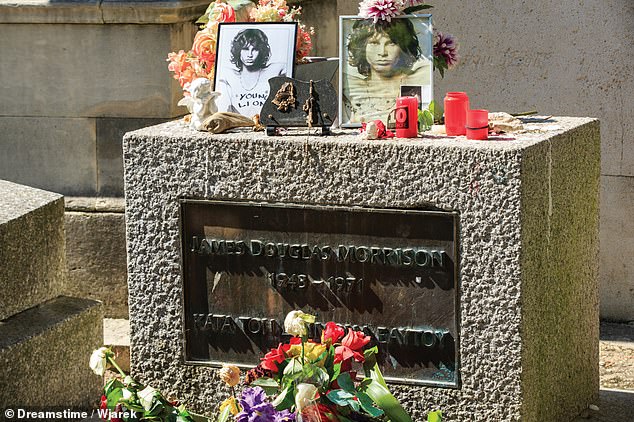 JIM MORRISON, 8 DECEMBER 1943 – 3 JULY 1971, PERE LACHAISE CEMETERY, PARIS: The book explains that Morrison, the lead singer of LA rock band The Doors, died aged 27 in Paris. His grave is ‘marked by a flat stone engraved with a Greek inscription that translates as “true to his own spirit”‘ 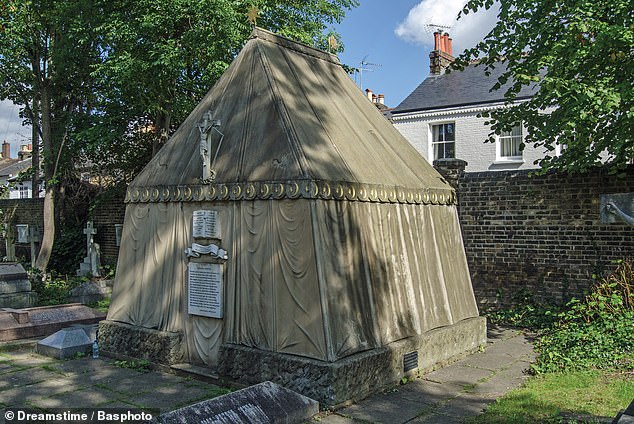 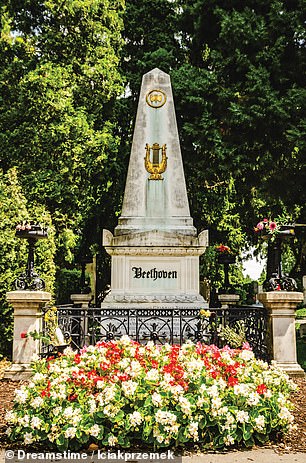 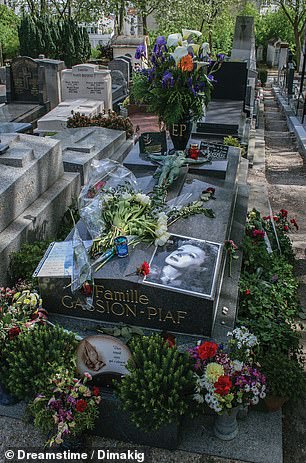 BEETHOVEN, 16 DECEMBER 1770 – 26 MARCH 1827, VIENNA CENTRAL CEMETERY, AUSTRIA (LEFT): ‘More than 20,000 people attended Beethoven’s funeral in 1827, after which his body was interred in Vienna’s Whring Cemetery in 1863,’ reveals Horne, who continues: ‘However, at the request of the Viennese Society of Music Lovers, his body was exhumed, studied and then reinterred at the same site in a grander, metal coffin. Schubert, who was buried nearby, suffered the same fate. Then, in 1888, both men’s remains were removed to Vienna Central Cemetery, where they now lie not far from each other.’ EDITH PIAF, 19 DECEMBER 1915 – 10 OCTOBER 1963, PERE LACHAISE CEMETERY, PARIS (RIGHT): ‘The singer and actress Édith Piaf is buried alongside her father Louis-Alphonse Gassion, second husband Theo Sarapo and daughter Marcelle, in Paris’s celebrated cemetery, Pere Lachaise,’ explains Horne. ‘Her career took off amid the German occupation of Paris during World War II and she was later accused of collaboration with the Nazis. However, she was also praised for the support she gave the Jewish musician Michel Emer – paying for his escape from Paris to unoccupied France – and for providing cover for resistance activities that occurred during her concerts at prison camps.’ 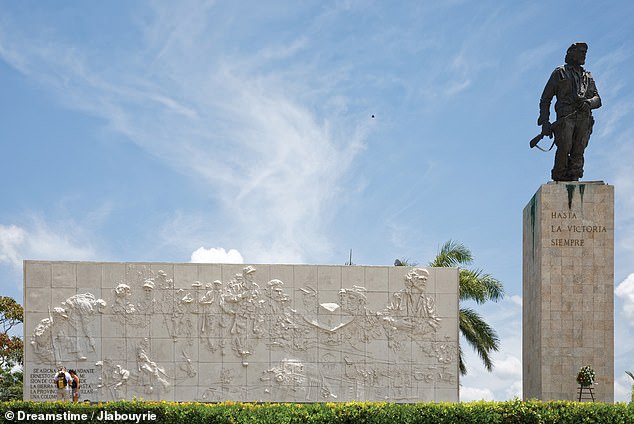 CHE GUEVARA, 14 JUNE 1928 – 9 OCTOBER 1967, CHE GUEVARA MAUSOLEUM, CUBA: This monument to Guevara, the hero of the Cuban revolution, has housed his mortal remains since 1997, says Horne. It also contains the remains of six of his fellow insurgents ‘whose bodies had spent 30 years dumped in a mass grave after their execution by Bolivian forces in 1967’. He adds: ‘It stands in Santa Clara, the site of the final, decisive battle in the Cuban revolution’ 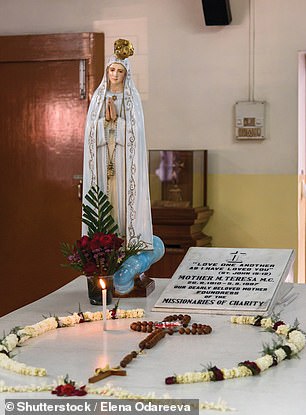 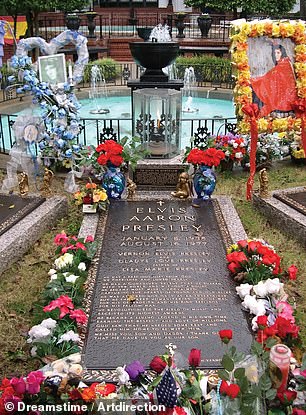 MOTHER TERESA, 26 AUGUST 1910 – 5 SEPTEMBER 1997, KOLKATA, WEST BENGAL, INDIA (LEFT): ‘Known to the Catholic church as St Teresa of Calcutta, and around the world as Mother Teresa, Mary Teresa Bojaxhiu was born in Skopje in 1910 in what is now North Macedonia,’ writes Horne. ‘For almost 50 years, she worked in Kolkata with the Catholic Missionaries of Charity, an organization she founded to care for the sick and poor. In 1979, she was awarded the Nobel Peace Prize for her work, and on her death in 1997 at the age of 87 she was granted a state funeral by the Indian government. Her body was then buried in the former dining room at the Kolkata convent where she lived.’ ELVIS PRESLEY, 8 JANUARY 1935 – 16 AUGUST 1977, GRACELAND, MEMPHIS, TENNESSEE (RIGHT): ‘Originally buried next to his mother in Boston’s Forest hill Cemetery two days after his death, the body of Elvis Presley – and that of his mother – was exhumed and reburied in the grounds of his home at Graceland barely a month later, after several men were caught allegedly attempting to steal it as part of a ransom demand,’ Horne explains. ‘One of the men involved later claimed that the attempted theft had actually been a hoax designed to justify the reburial of Elvis at Graceland’ 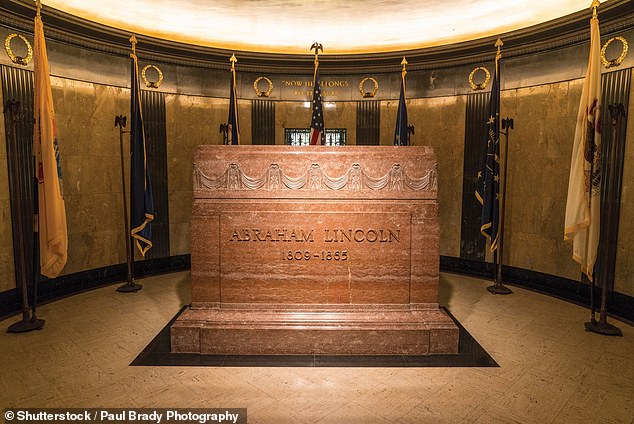 ABRAHAM LINCOLN, LINCOLN TOMB, OAK RIDGE CEMETERY, SPRINGFIELD, ILLINOIS: ‘Completed in 1874, six years after Lincoln’s assassination at Ford’s Theatre in Washington D.C. during a performance of Our American Cousin, the Lincoln Tomb houses the remains of the 16th US President along with those of his wife and three of his four sons,’ explains Horne. ‘Constructed from granite, its central obelisk stands 36 metres (118ft) tall. The burial room beneath it contains a red marble memorial inscribed with the president’s name and the years of his life. After a failed attempt in 1876 to steal his remains and hold them to ransom, Lincoln’s body was moved to a less easily accessible part of the tomb’ 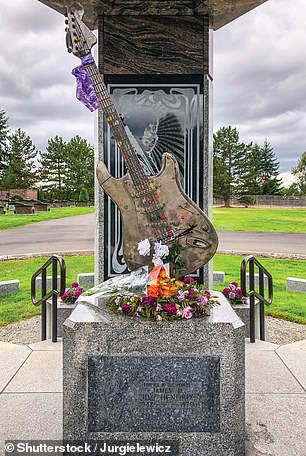 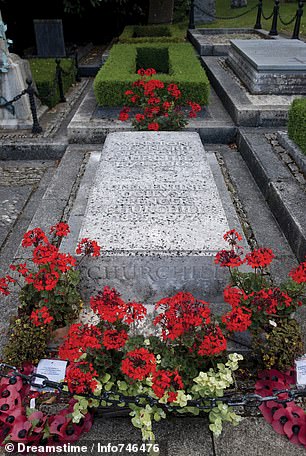 JIMI HENDRIX, 27 NOVEMBER 1942 –18 SEPTEMBER 1970, GREENWOOD CEMETERY, RENTON, WASHINGTON [LEFT]: ‘The guitarist, singer and songwriter Jimi Hendrix has been described as the greatest instrumentalist in the history of rock music,’ says Horne. ‘After his death in London at the age of 27, his body was flown back to Seattle and buried at the nearby Greenwood Cemetery, not far from the grave of his mother. In 2002, it was transferred to a new location in the cemetery, beneath a three-pillared marble memorial adorned with several portraits, quotations from his lyrics and a sculpture of a guitar.’ WINSTON CHURCHILL, 30 NOVEMBER 1874 – 24 JANUARY 1965, ST MARTIN’S CHURCH, OXFORDSHIRE [RIGHT]: ‘The grave of the British prime minister and wartime leader Sir Winston Churchill is to be found in the cemetery of the parish church of St Martin’s in Bladon, Oxfordshire, not far from Blenheim Palace, where he was born,’ says Horne. ‘After his death, Churchill’s body lay in state for three days at Westminster Hall before receiving a state funeral at St Paul’s Cathedral. It was then taken by boat along the River Thames to Waterloo Station and by train to the Churchill family plot at St Martin’s. His widow Clementine now lies alongside him, while the graves of his parents, his brother, and three of his children can be found nearby’ 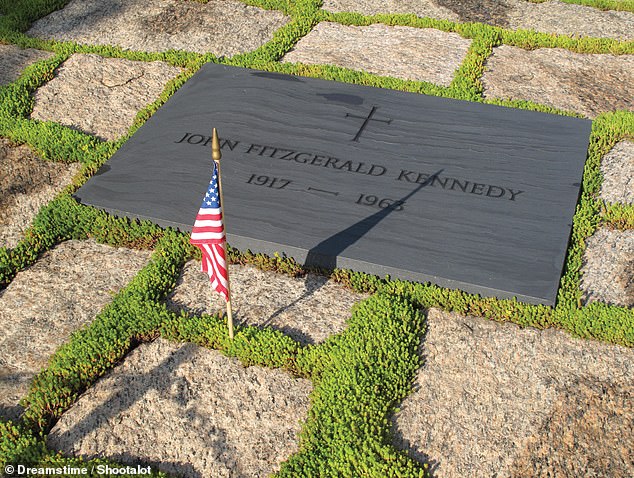 JOHN F. KENNEDY, 29 MAY 1917 – 22 NOVEMBER 1963, ARLINGTON NATIONAL CEMETERY, VIRGINIA: Kennedy had visited Arlington National Cemetery to mark Veterans Day, only 11 days before he was assassinated by Lee Harvey Oswald, reveals Horne, who continues: ‘Hundreds of thousands of people paid their respects to his casket as it lay in state overnight at the US Capitol in Washington D.C. before it was transferred to St Matthew’s Cathedral for a state funeral, and then buried at Arlington. The presidential memorial, an eternal flame, was designed by Kennedy’s friend the architect John Carl Warnecke, and was opened to the public in 1967’ 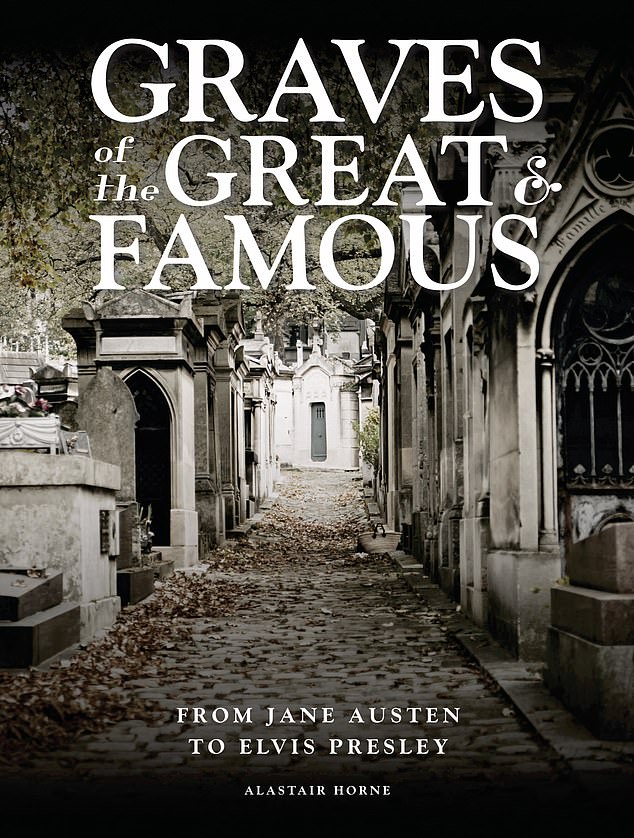