A brutal heatwave is unfurling across two-thirds of the nation, blighting the east with temperatures that will make Washington DC feel as hot as Death Valley, and roast much of the country with 100-degree heat.

The crushing mass of hot air is likely to blanket the region, home to a third of the U.S. population, through Sunday with little overnight relief, said meteorologist David Roth of the National Weather Service’s Weather Prediction Center.

‘There are 124 million people under a heat advisory or excessive heat warning – that’s a third of the population,’ Roth said. As of Friday, the heat wave sprawled from Kansas to the Atlantic Coast, and from South Carolina north to Maine. It was expected to intensify on Saturday and Sunday.

The heat index for DC is forecast at 111F for Saturday, within two degrees of the index expected for Death Valley.

The National Mall was nearly deserted on Friday as people sought shelter in the shade. The heat index in DC is forecast at 111F for Saturday, within two degrees of the forecast heat index for Death Valley, California 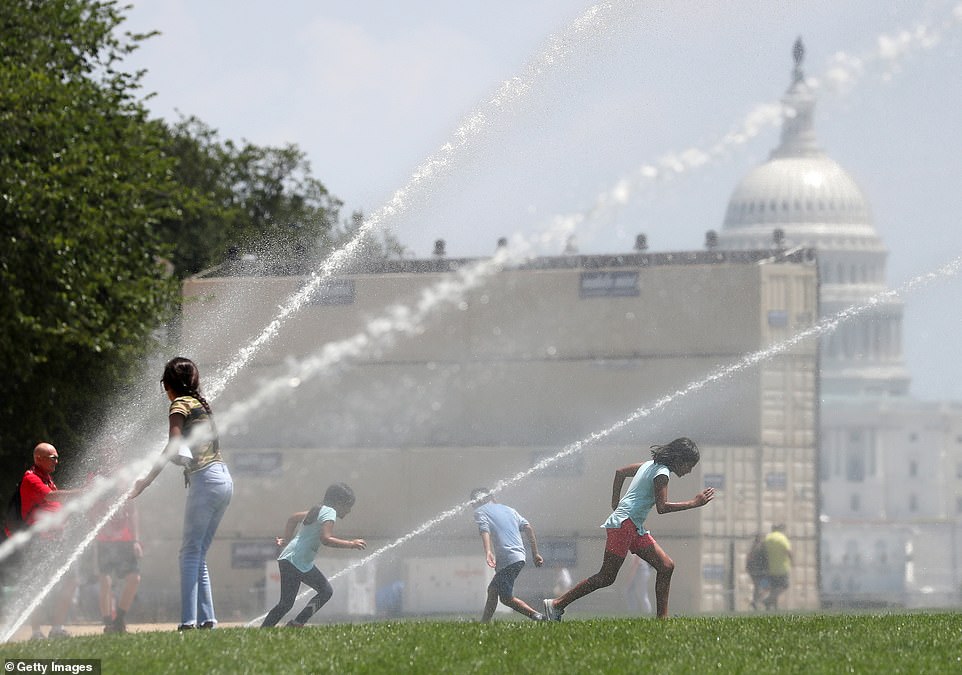 Children play in open sprinklers on the National Mall on Friday in Washington, DC during a heat wave 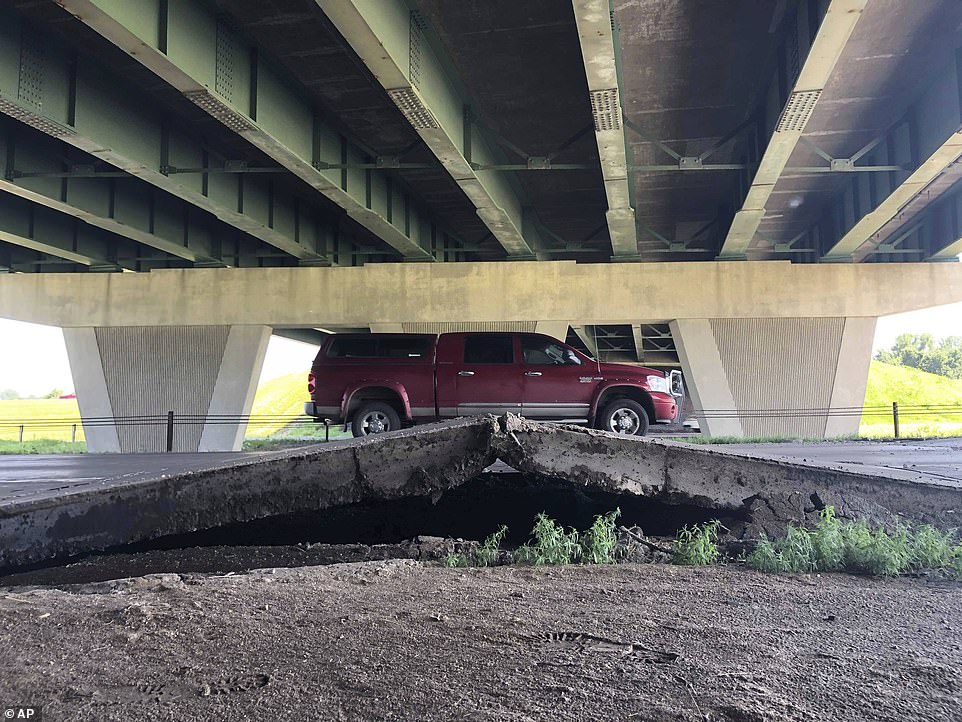 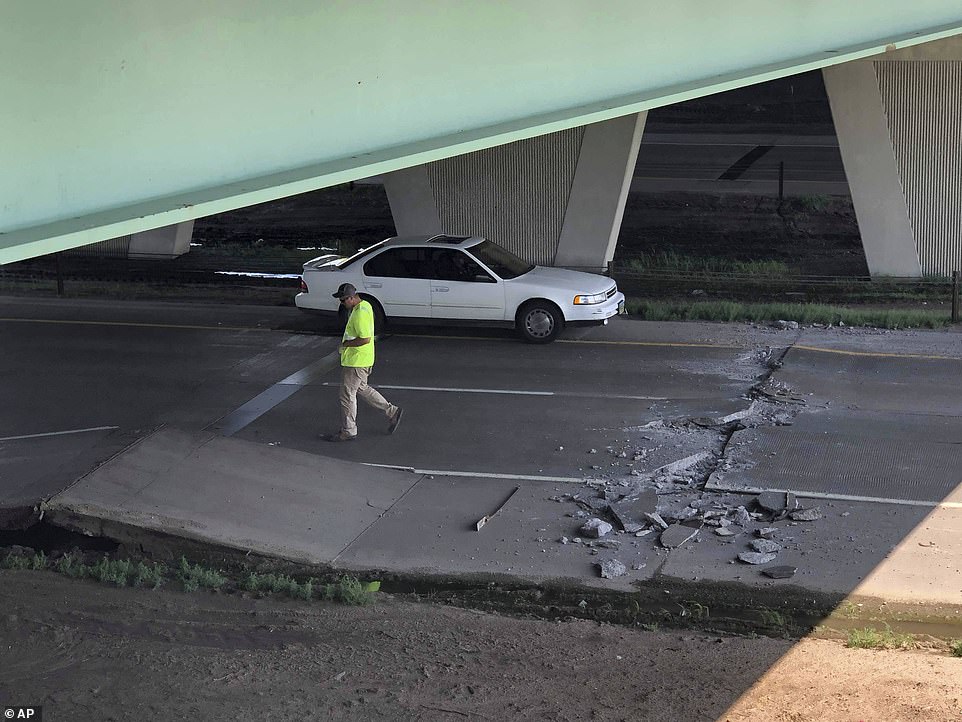 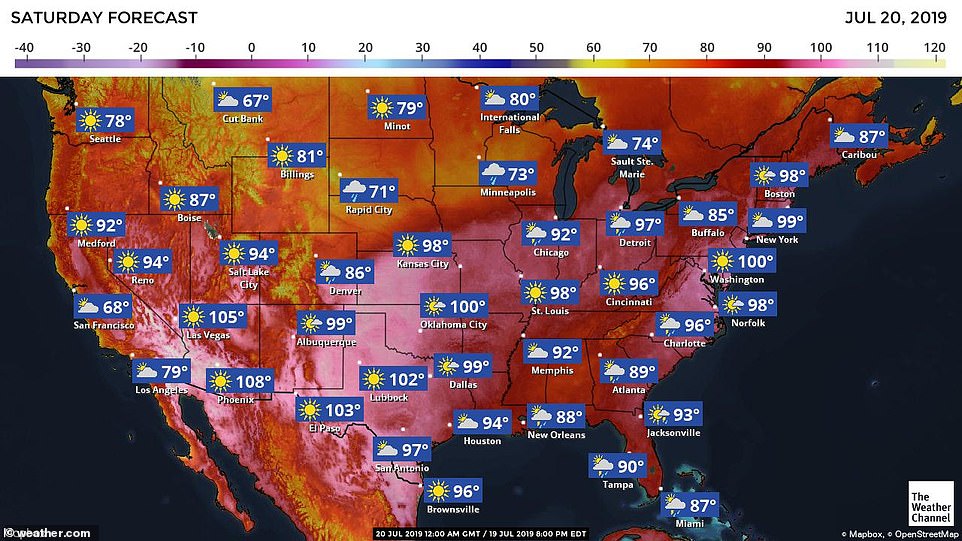 In Sioux Falls, South Dakota, soaring temperatures of 93F with a heat index of 107F were reported when portions of Insterstate 229 buckled and cracked.

On Friday night, a massive power outage was reported in the Detroit metro area, affecting some 80,000 customers of DTE Energy.

‘Hot weather is dangerous and can kill. People with chronic physical and mental health conditions should use air conditioning if they have it, and get to a cool, air conditioned place if they don’t,’ said New York City Health Commissioner Dr. Oxiris Barbot. 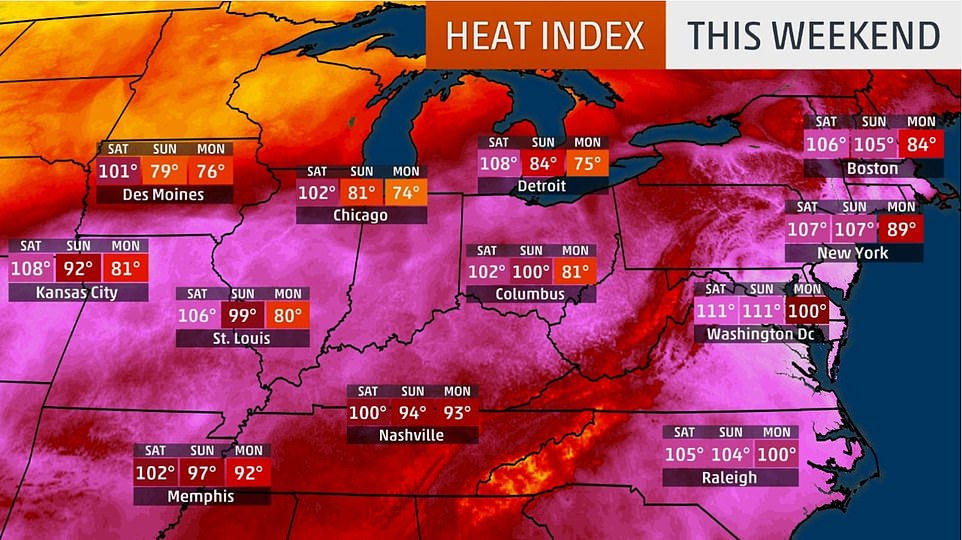 The heat index, or what it will actually feel like with humidity, will be even more brutal in the Midwest and East Coast 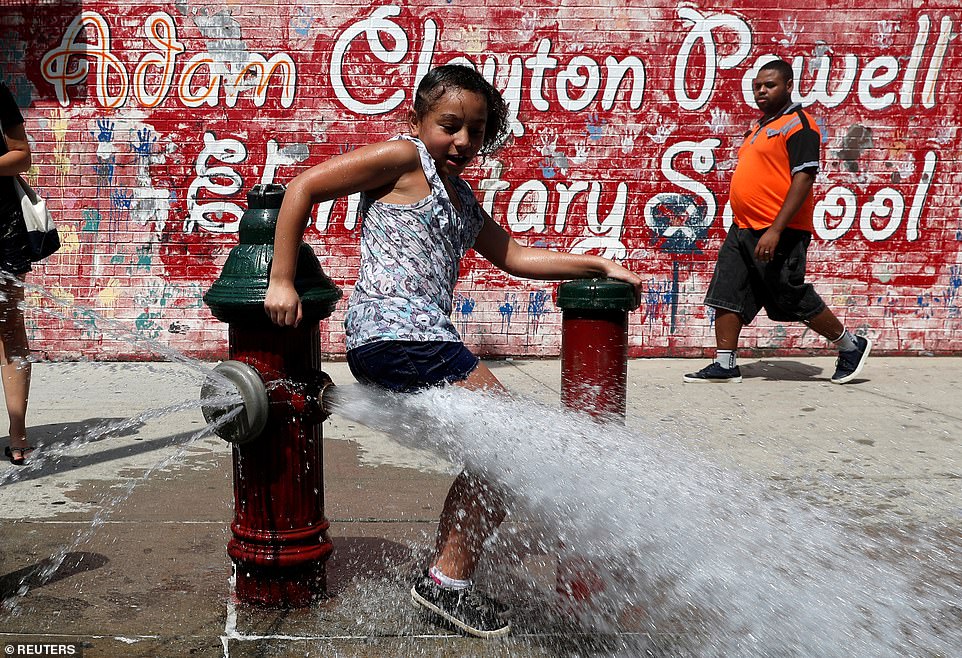 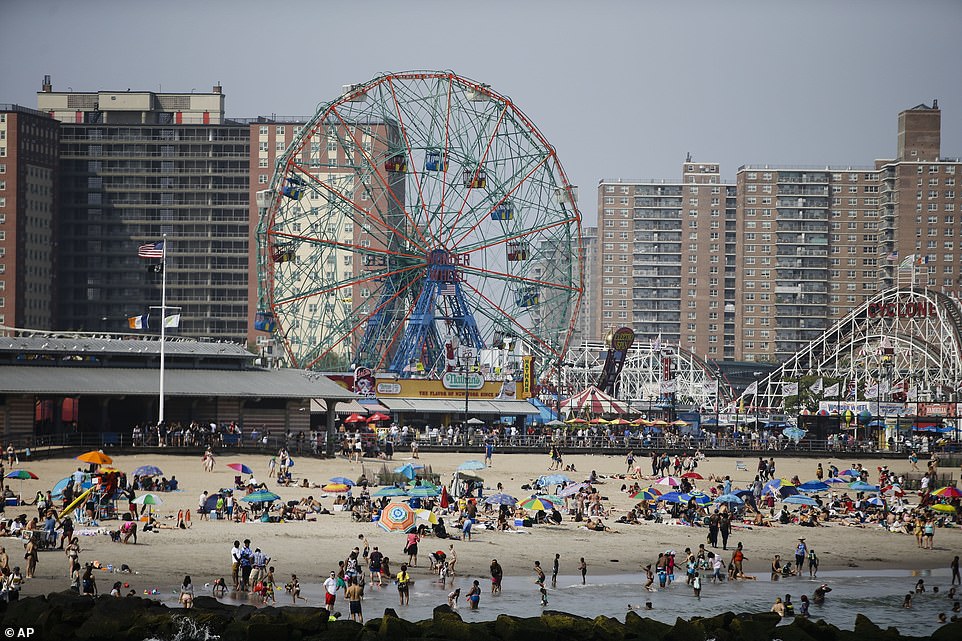 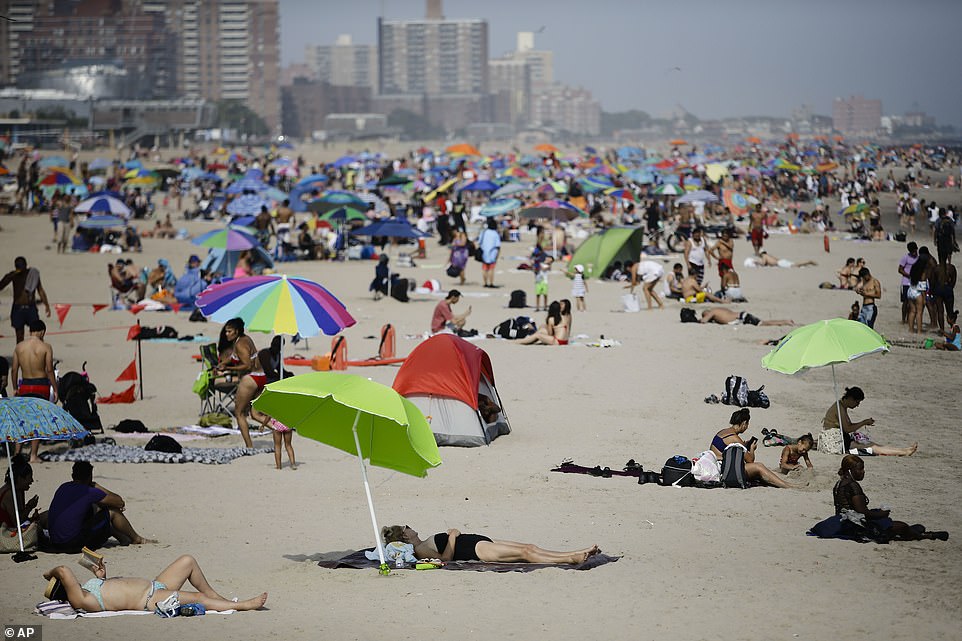 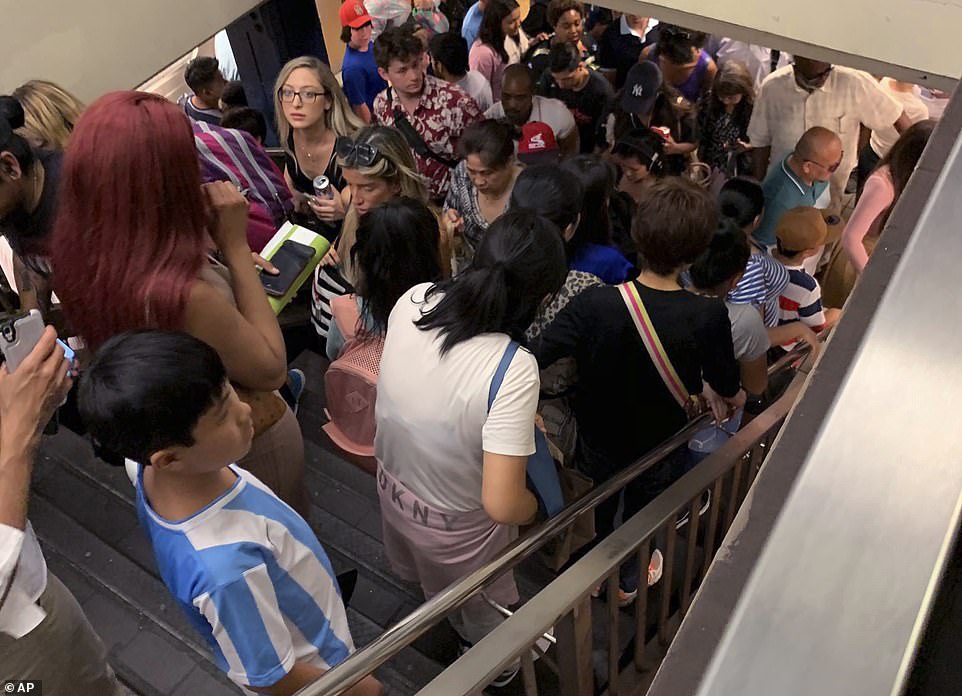 The heat in New York City was compounded by a major disruption of service on seven subway lines Friday. The MTA blamed a ‘network communications’ issue for the suspension of service on the Nos. 1, 2, 3, 4, 5, 6, and S trains

A de Blasio spokeswoman says a Times Square commemoration of the 1969 moon landing has been canceled, as well.

Officials earlier announced the cancellation of the New York City Triathlon, which was scheduled for Sunday.

Temperatures in the high 90s are forecast for Saturday and Sunday in New York, with a heat index well over 100.

De Blasio has directed owners of office buildings over 100 feet tall to set thermostats to 78 degrees through Sunday to conserve energy.

Amid fears of massive blackouts, utilities in the eastern half of the United States said they expect to have enough resources to meet power demand, but asked consumers to turn down air conditioners to avoid putting stress on the system. 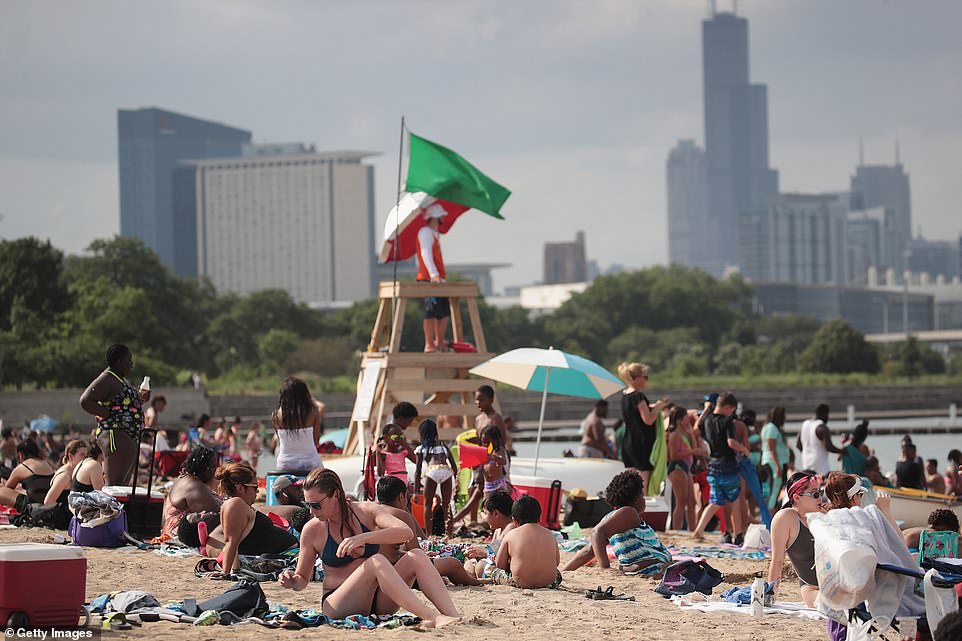 Chicago: Residents cool off at 31st Street Beach as temperatures are forecast to head into the mid to high 90’s on Friday 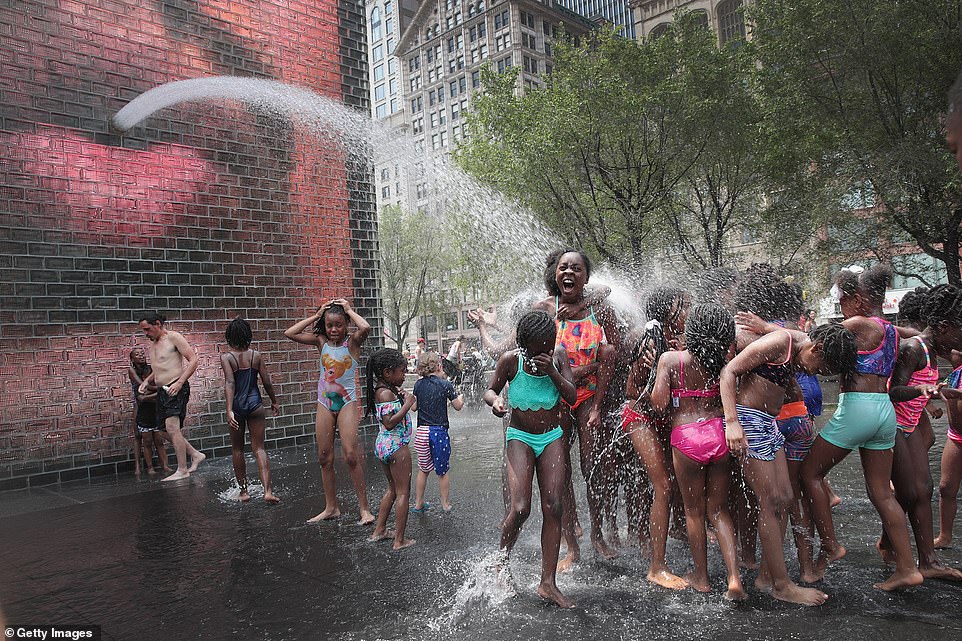 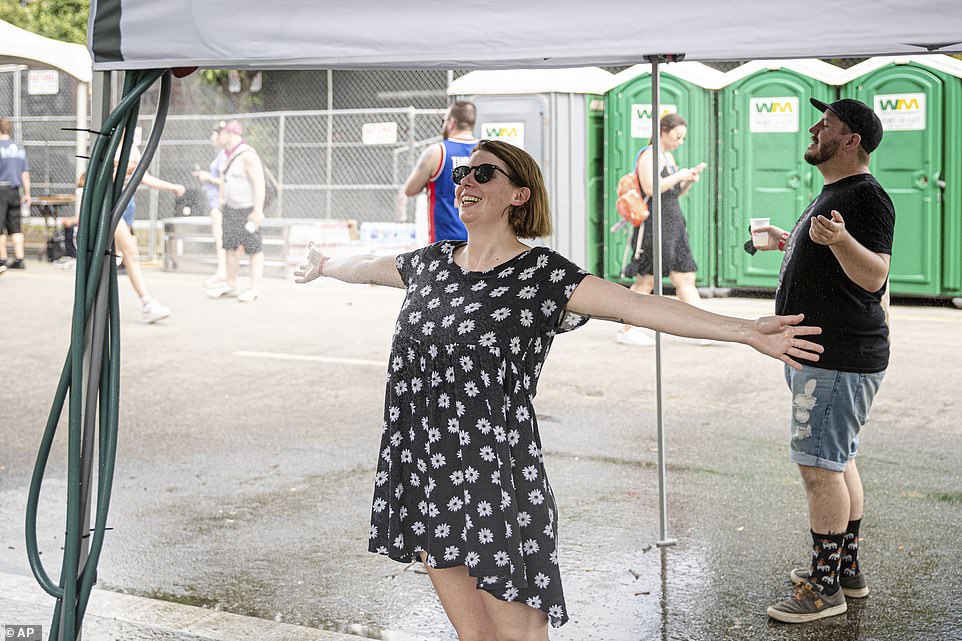 Concertgoers cool off in a spray of water at Pitchfork Music Festival in Union Park, Chicago on Friday 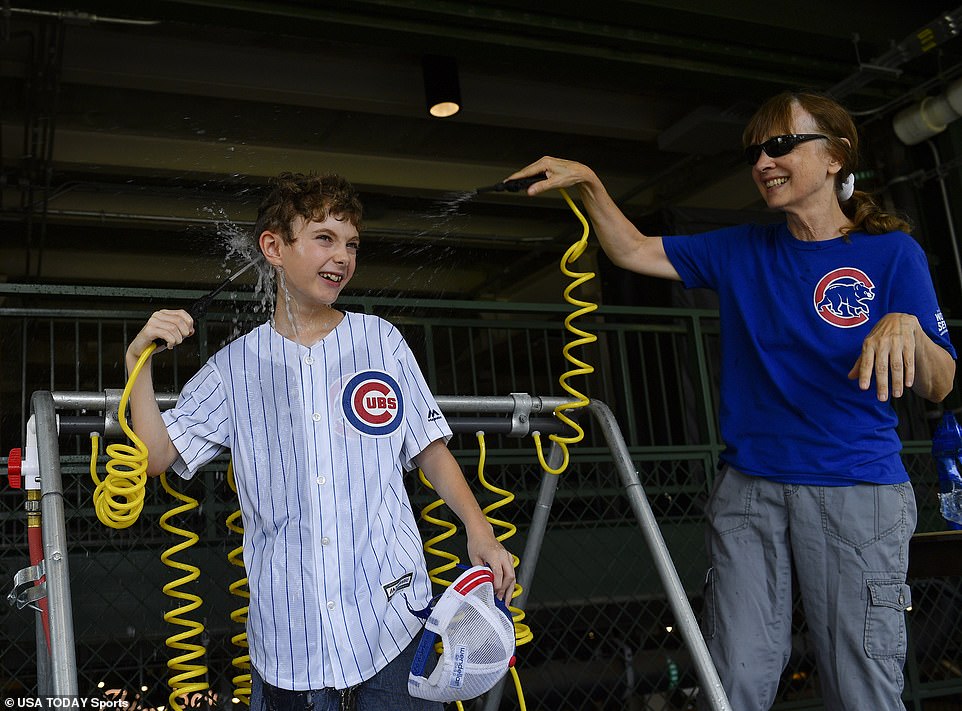 ‘I’m very confident,’ Consolidated Edison Inc President Tim Cawley said when asked at a news conference if the utility, which serves New York City, could quickly respond to any outages in the country’s most populous city. He said 4,000 employees were poised to work 12-hour shifts over the weekend.

Last weekend, parts of Manhattan lost power for hours, darkening Broadway theaters, halting subways and closing restaurants and shops in a partial blackout blamed on a faulty piece of equipment.

Early on Friday, as the heat intensified in downtown Madison, Wisconsin, 11,600 homes and businesses lost power after fires erupted at two substations near the state capitol.

With temperatures forecast to hit 93F later in the day, Governor Tony Evers asked nonessential state workers to stay home. By midafternoon, power had been restored to all but about 3,500 customers, according to Madison Gas and Electric . 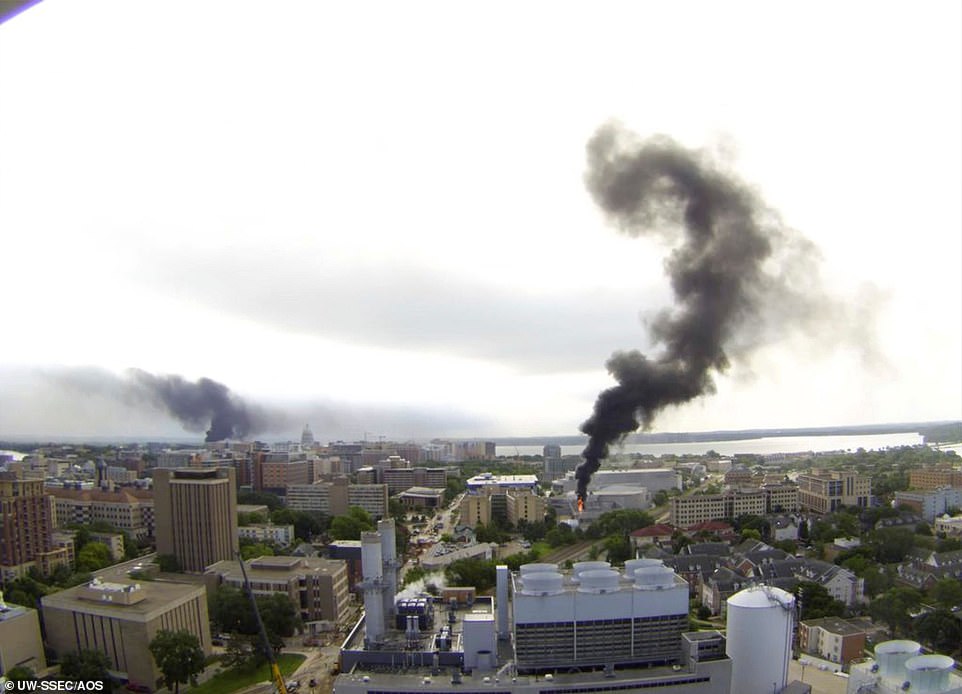 Wisconsin: A fire is seen at an electrical substation during a heat wave in Madison on Friday 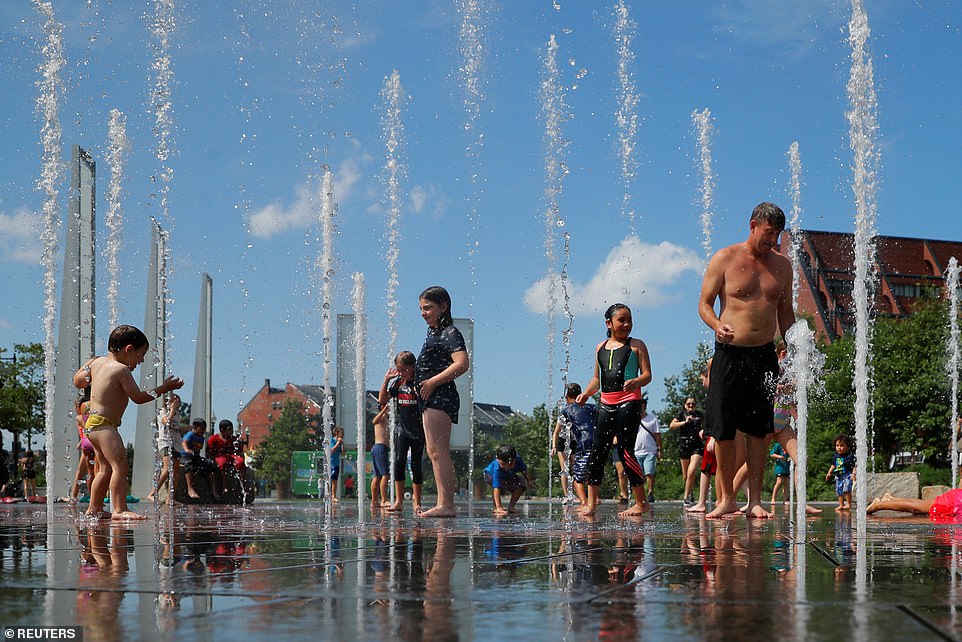 Boston: Kids and adults cool off in a fountain on the Rose Kennedy Greenway on the first day of a summer heatwave Friday 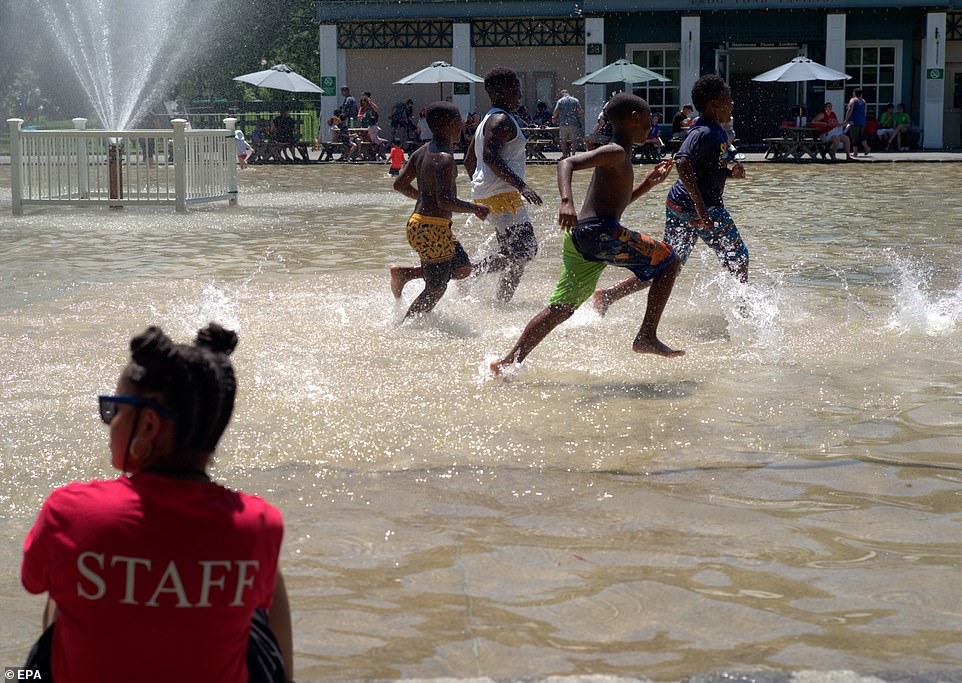 Children run through the water of the Boston Common Frog Pond in Boston, Massachusetts on Friday 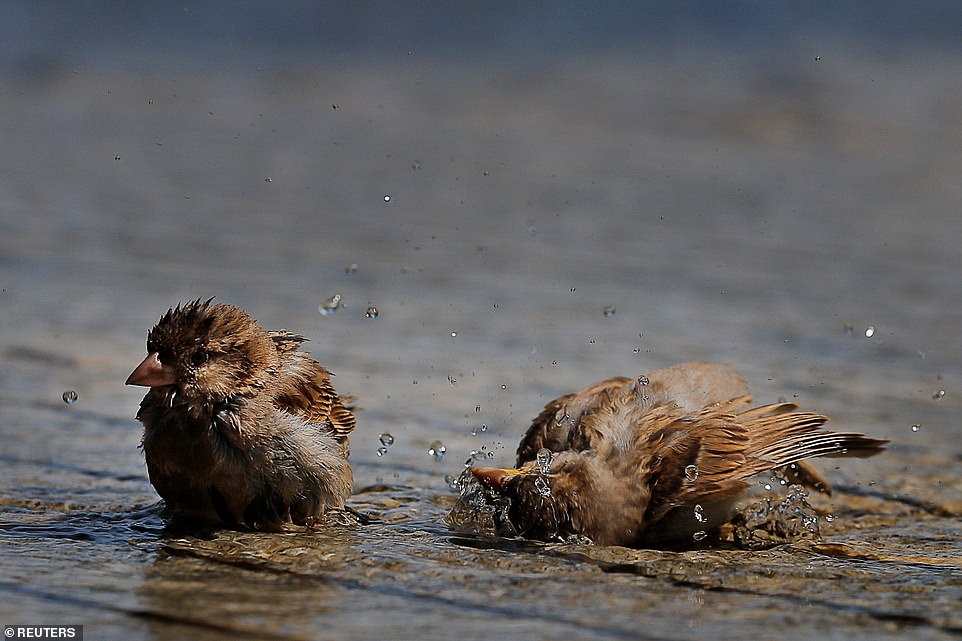 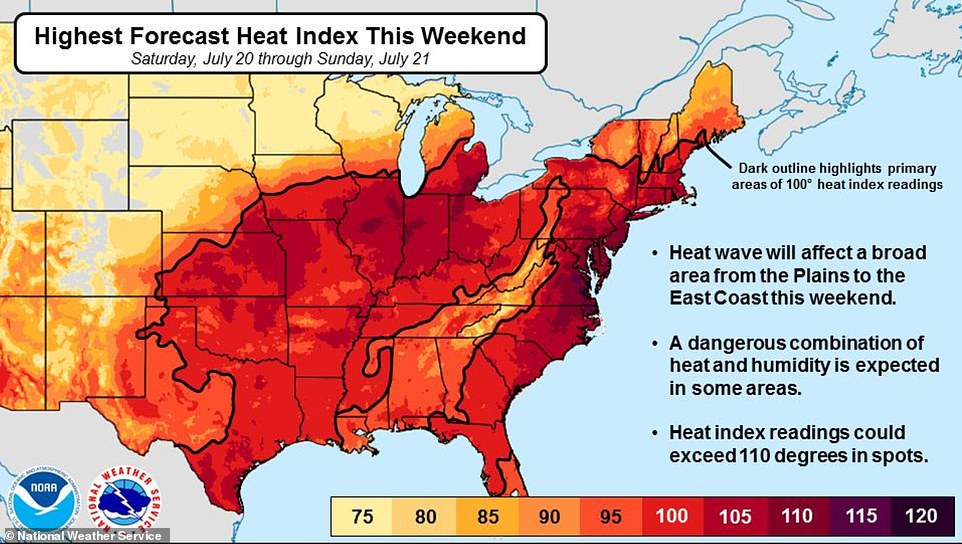 Heat indexes, or ‘real feel’ temperatures, will be scorching throughout the Midwest and East Coast this weekend

On the East Coast, temperatures on Saturday were forecast to reach near 100F in Washington, and 99F in Philadelphia and New York, where it would feel more like 108F with high humidity. Much the same was in the forecast for Sunday.

‘It’s crazy,’ said Fonik Bitaly, 28, who was entering his sixth hour of work dressed as a costumed character, Batman, in New York City’s Times Square. ‘It’s really, really hard to be outside right now. You need to drink lots of water or you’ll be in serious trouble.’

‘As soon as you get outside, it’s like ‘Boom!’ said Loig Loury, 32, who moved to New York from Paris last year. ‘The heat attacks you.’

To keep cool during past heat waves, suburban children typically ran under lawn sprinklers and city kids frolicked in the spray of fire hydrants, but the New York City Fire Department warned that special spray caps that firehouses hand out should be used to avoid creating a hazard.

‘If you open a fire hydrant without these caps, you endanger your neighbors because the water pressure drops and our firefighters are not able to fight fires,’ FDNY Commissioner Daniel Nigro wrote on social media.