A deal to fly in foreign workers to pick fruit in Victoria has been slammed as ‘too little and too late’ by the federal government.

The interstate agreement means 1,500 Pacific Islands workers will fly in to Tasmania  to undergo taxpayer-funded quarantine before they go onto Victoria to work.

The state’s fruit-picking industry had been hit hard by Australia’s border closure during the coronavirus pandemic – with an estimated $38million worth of produce already lost because of the strict travel restrictions.

Under the deal between Victoria and Tasmania, taxpayers will subsidise the quarantine of the foreign national workers in the first six months of 2021.

A Pacific Island nation worker in Australia. Farmers are flying in workers from impoverished countries where the cost of living is so low that the small amount of money they save from fruit picking stretches a long way back home. Coronavirus briefly stopped the practice

In return for Tasmania’s agreement to quarantine the workers, Victoria will ‘facilitate’ Tasmania’s commitment to bring back 330 stranded Australian travellers from overseas.

Federal Agriculture Minister David Littleproud criticised the Victorian government for allowing the Australian Open tennis players into the state before establishing its own quarantine for seasonal workers.

He said the announcement of the deal was ‘too little and too late’ for some Victorian growers.

‘Victoria was the only state to not have an arrangement in place despite the [seasonal worker] program recommencing in August,’ he said.

Farmers have long complained they cannot source workers in Australia despite a youth unemployment rate of 15.6 per cent for 18-year-olds to 24-year-olds in Victoria in November, according to the Australian Bureau of Statistics.

Australia’s higher living costs mean wages must be higher to make it worthwhile for workers to move to regional areas for temporary jobs.

Instead of raising wages, farmers have turned to impoverished regional nations to import a workforce including East Timor, the Pacific Islands and PNG.

When the coronavirus pandemic hit, foreign workers were prevented from flying in to Australia.

More than 50 farmers then left $38 million worth of fruit and vegetables to rot according to the National Lost Crop Register, as they had not organised an Australian workforce to replace the lost fly-in fly-out workers.

It is not known how much the deal with Tasmania will cost taxpayers – with the Victorian government and the agriculture industry both contributing to the cost of the isolation.

‘There is abundant evidence of temporary migrants being ruthlessly exploited on Australia’s farms,’ he has written in a forthcoming column to be published on Monday.

‘Many Australian farms have also flat out refused to employ local workers because they have to be paid a legal wage and are far less easy to exploit.

‘Cut off the cheap migrant labour pipeline and Australian farms will be forced to raise wages. In turn, this will drive farms to automate and lift productivity, boosting both profits and wages.

‘The higher cost of labour in advanced countries forces farms to invest in machinery, which lifts productivity. 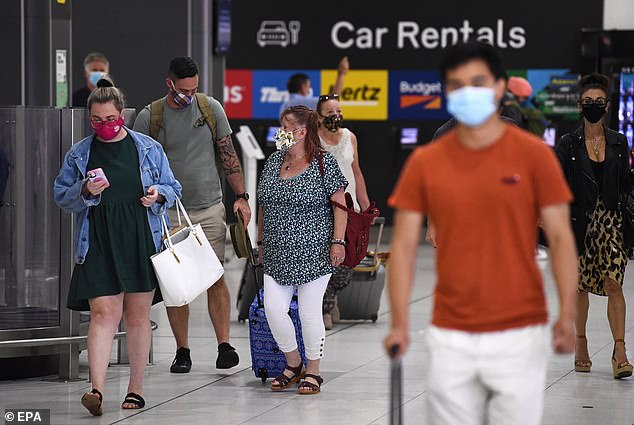 Travellers at Tullamarine Airport on January 8.  Returning Australian citizen numbers have been halved due to the costs of hotel quarantine – but farmers want to fast-track the importation of foreign workers to quarantine in Tasmania, with taxpayers to partially fund it

‘If farm margins are so weak then they should be forced to consolidate, driving economies of scale, improved productivity, and higher profit margins.

‘Australians are not inherently lazy. But they do know when they are being exploited and paid slave wages.

Agriculture Minister David Littleproud said the Federal Government had worked with state and territory governments to find workers for farmers during the pandemic.

‘Measures in place include varying visa restrictions for foreign backpackers, providing incentives for Australian students and workers to take up agriculture jobs, and vetting Pacific island and region workers under the seasonal workers program,’ he said.

Despite large numbers of citizens being furloughed on JobKeeper or made unemployed on JobSeeker, Mr Littleproud said farm jobs are ‘market tested’ so Australians get first opportunity for employment.

The move to import foreign workers is controversial as Australian citizens are themselves having difficulties returning home.

In January, the National Cabinet agreed to halve the cap on returning international arrivals in WA, NSW and QLD to ease pressure on hotel quarantine – and require daily testing for quarantine workers. 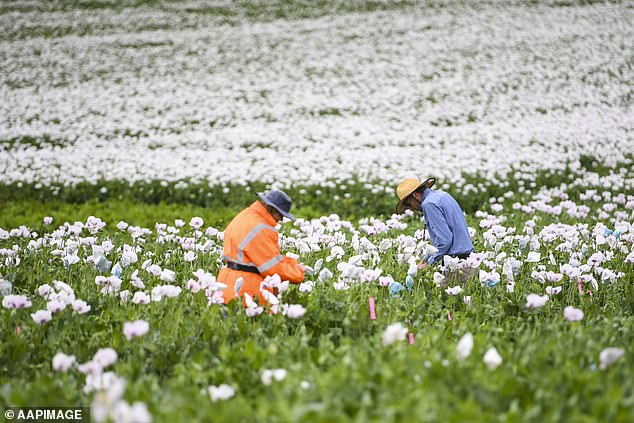 The cut was prompted by threat posed by the new, highly infectious UK and South African strains of coronavirus, and the cost of hotel quarantine.

The reduction means about 2,500 fewer people will be able to enter the country each week until at least mid-February when national cabinet will review the policy.

In late 2020, about 36,000 Australians were registered as being stuck overseas, unable to get flights back to Australia due to the caps on hotel quarantine, the Guardian reported.

Exemptions though continue to be made both for farmers to import workers from impoverished developing countries and for tennis players to compete in the Australian Open.

Daily Mail Australia has contacted both the Victorian Farmers Federation and Mr Littleproud’s office via email for comment.