Death Of A Salesman

Arthur Miller and Americans are over here. At The Old Vic there is Bill Pullman and Sally Field in All My Sons. Over the road at the Young Vic is Wendell Pierce, New Orleans-born star of The Wire.

He was also Meghan Markle’s father in the series Suits. Pierce invited the Duchess to see this show but, as he says, she’s rather tied up with her own new production.

Pierce plays poor Willy Loman, a washed-up travelling salesman whose sales figures, like his life, are spiralling down the plughole. The money isn’t coming in. His sons are a disappointment. Arthur Miller can never be accused of trying to cheer us up. 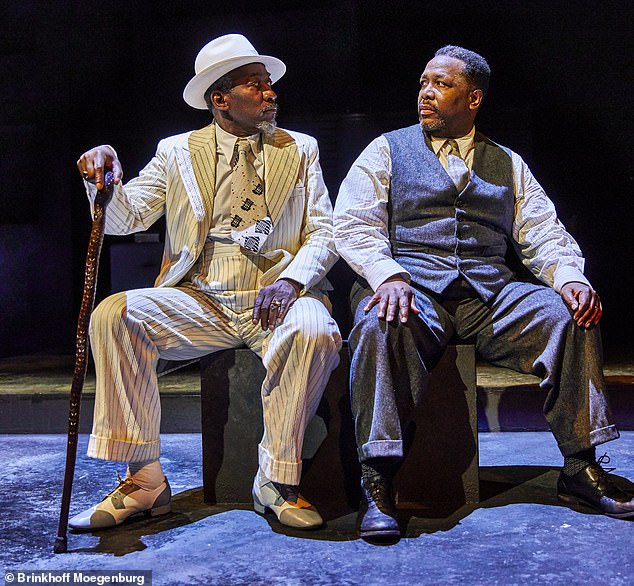 Wendell Pierce plays poor Willy Loman (pictured above with Joseph Mydell), a washed-up travelling salesman whose sales figures, like his life, are spiralling down the plughole

His 1949 classic is considered a major socialist assault on the American Dream. This play now strikes me as being more straightforwardly about mental illness. But it also taps into our own modern fear of obsolescence.

I for one wake up in a sweat dreaming that Chinese robots have become theatre critics.

The implicitly Jewish part of Willy Loman is associated on screen with the flyweight Dustin Hoffman. Pierce is a roly-poly actor of much easier charm. The fact that he’s black – the show is set in period – is an added weight on his already bowed back. 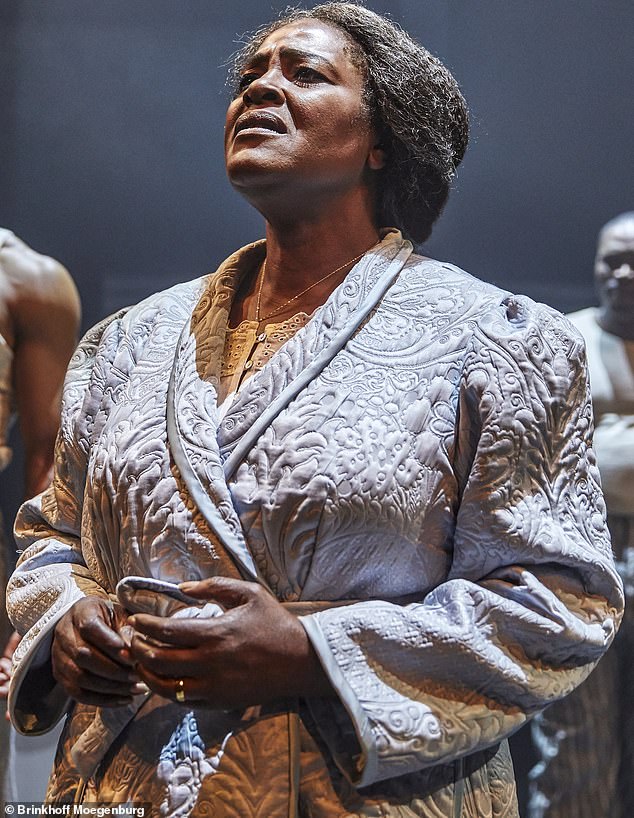 The great Sharon D Clarke is Willy Loman’s wife Linda, whose palpable love for Willy as he slowly cracks up is heartbreaking

There’s an encounter with his white boss, which here becomes a scene of appalling racial humiliation. He has lost his salesman’s front – ‘riding on a smile and a shoeshine’.

The great Sharon D Clarke is his wife Linda, whose palpable love for Willy as he slowly cracks up is heartbreaking. As the sons, the sporty son Biff who has chucked his career away is played by the imposing Arinzé Kene, while Martins Imhangbe plays Happy, the narcissistic womaniser.

The set of grey, slabby blocks is, frankly, a downer; and it’s a cliché, surely, to add gospel music to this African-American version (indifferently directed by Marianne Elliott and Miranda Cromwell, both white) in order to further crank up the play’s bitter lyricism.

A great cast – but an evening of groaning length.

The Last Temptation Of Boris Johnson

This opens with Boris, Mayor of London, in 2016, waiting in his kitchen. The guests in this topical but lame satire include Michael and Sarah Gove and media mogul Evgeny Lebedev.

Will Barton’s engaging Boris performance seems to me wasted in this. Jonathan Maitland’s comedy has nothing new to say about Gove’s treachery, Johnson’s character, or indeed anything much. 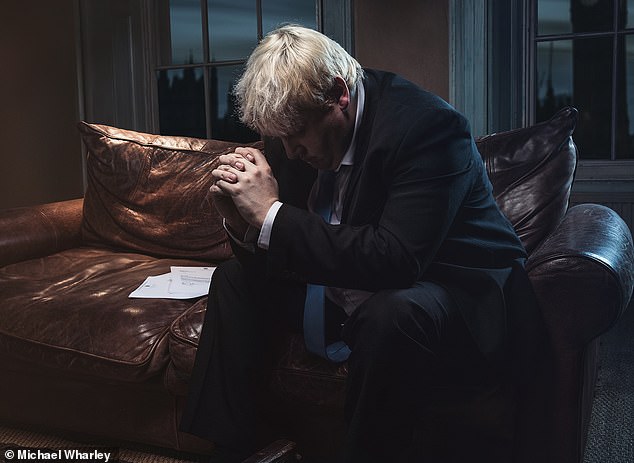 Will Barton’s engaging Boris performance seems to me wasted in this. Jonathan Maitland’s comedy has nothing new to say about Gove’s treachery or Johnson’s character

Among the visitors in Boris’s mind are the ghosts of Mrs Thatcher (Steve Nallon), Churchill (Arabella Weir) and the living, grinning Tony Blair (Tim Wallers).

The second half is set in 2029. Brexit has actually happened. I won’t reveal who the PM is but Boris (now the boss on The Apprentice) is called on by the Tory Party to take the country – you guessed it – back into the EU. Re-entry is called ‘Brentry’.

But at no point is this fantasy anything like funny or sharp enough. Boris would be unimpressed at its unChurchillian lack of attack. A disappointment for those who loved Maitland’s much more entertaining play about Geoffrey Howe, Dead Sheep.

Under Michelle Terry’s artistic directorship, the Globe again offers an ensemble company performing several productions. It makes sense: these three plays flow into one another, allowing you to chart characters’ journeys, particularly prince Hal, who will shun his raucous drinking buddies to become ‘the warlike Harry’, King Henry V.

Happily, it’s a democratic vision, too, with most actors playing many roles, of either gender, with a fluent androgyny.

The only slight problem is that Terry is still very much the shining star – and she’s only in the first play. One of our finest Shakespearean actors, she makes a dazzling Hotspur, the young upstart in Henry IV Part 1. 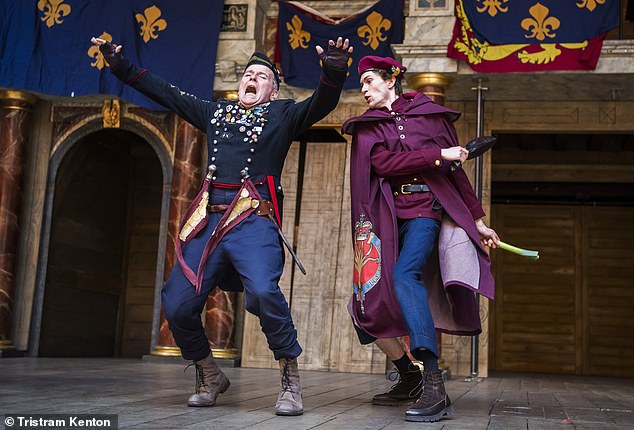 It makes sense: these three plays flow into one another, allowing you to chart characters’ journeys (Colin Hurley and Steffan Donnelly in Henry V)

It’s like she’s hot-wired the part: every thought, word and gesture so varied and deliberate, with a galvanising, arrogant impatience that’s funny too.

You miss her when she’s gone – especially in Henry IV Part II, which sags and drags, a penitent slog in order to get to the more energised Henry V. It feels like the directors, Federay Holmes and Sarah Bedi, lose control here.

The comedy sprawls, unfunny and unfocused. 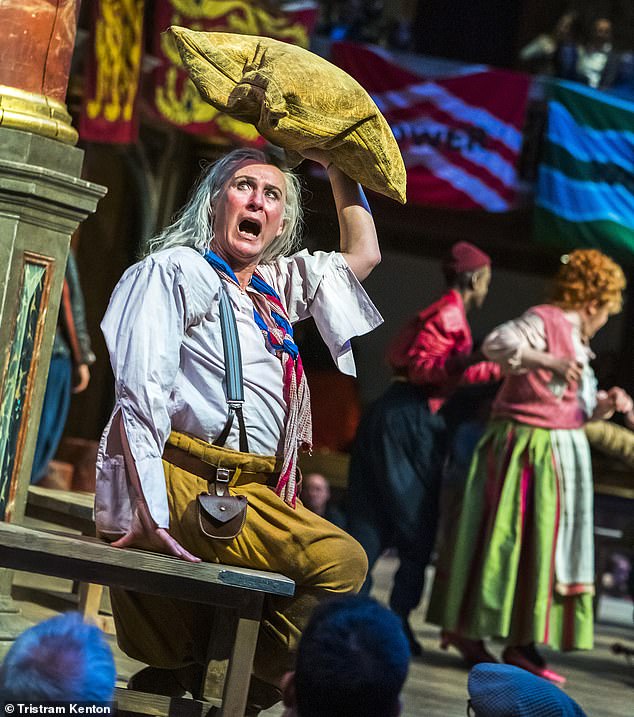 Helen Schlesinger has fun playing Falstaff, riffing off the audience, rolling her hips and belly. She seems to be channelling Jennifer Saunders in Ab Fab

Still, Helen Schlesinger has fun playing Falstaff, riffing off the audience, rolling her hips and belly. She seems to be channelling Jennifer Saunders in Ab Fab with her sozzled, faux-innocent chumminess, but her Falstaff is notably quick and clever too.

However, it still feels quite well-mannered, and there’s little chemistry between her and Sarah Amankwah’s young Hal.

Although lithe and fleet-footed, with flashing eyes and impressive determination as she takes on royal responsibilities, Amankwah can also be rather one-note, and there’s not much sense of her character’s development.

When, as King Henry V, he betrays his old pals, it should feel devastating. But Amankwah’s young king is too coldly single-minded to suggest internal conflict, which robs the project of its pathos and pay-off.