DEBORAH ROSS: Deep Water? It could hardly be shallower

DEBORAH ROSS: Deep Water? It could hardly be shallower

Deep Water is, essentially, ITV’s version of Big Little Lies. It is a female-led ensemble. It puts women’s friendships centre stage. There are fraught meetings at school gates. There are nervy drives along waterfronts. There are secrets. But it is beset by Big Little Implausibilities, as when one of the characters has a quickie with someone else’s husband in a bathroom during a dinner party and then forgets to put her knickers back on. I have never had a quickie with someone’s husband in a bathroom during a dinner party, I confess, although it’s not through want of trying – ‘Quickie?’ I always volunteer – but would like to think I wouldn’t forget to put my knickers back on. I even wonder how you could forget to put your knickers back on, especially if you are wearing a dress. Wouldn’t you notice? Wouldn’t it feel odd? Wouldn’t you feel… you know… the breeze? That sharp nip in the Cumbrian air? 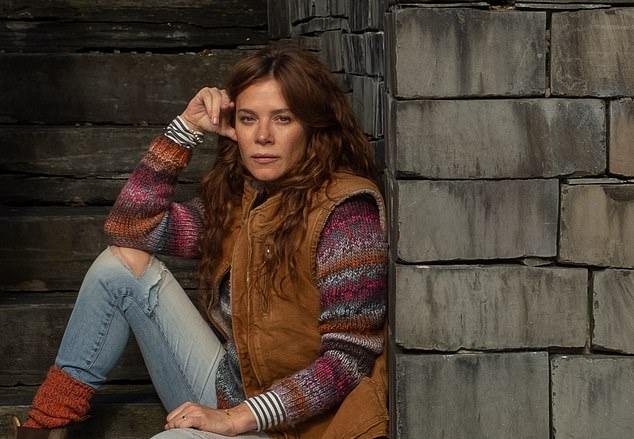 Holding it together: Anna Friel in Deep Water. Lisa is the beleaguered, frazzled, chaotic mother in thrall to Kate (Rosalind Eleazar), the mother who is the envy of all the other mums as she is rich and has a stunning home and appears to lead the perfect life

On paper, this has all its ducks in a row. It is based on the books by Paula Daly, who is known as ‘the UK’s Liane Moriarty’, Moriarty having written Big Little Lies. The script is by Anna Symon, who wrote Mrs Wilson, which was terrific. It is directed by Harry Wootliff, who wrote and directed the film Only You, which was also terrific. But it doesn’t dig deep. It doesn’t have to. It’s a thriller. Bodyguard didn’t dig deep. Big Little Lies often didn’t dig deep but occasionally did. (It was particularly excellent on women when they are not heard.) But if you are going to dig shallow and the characters are unsurprising and the script is unsurprising – ‘What kind of mother are you?’; ‘Men have needs!’ – and the plot is strewn with Big Little Implausibilities, you are certainly in trouble.

Set in the Lake District rather than Monterey, with Lake Windermere in the background rather than the Californian coast, there are three main characters. There’s Lisa, as played by Anna Friel, who is in fact tremendous and holds everything together. (The two stars are purely for her.) Lisa is the beleaguered, frazzled, chaotic mother in thrall to Kate (Rosalind Eleazar), the mother who is the envy of all the other mums as she is rich and has a stunning home and appears to lead the perfect life. She sends her young son to school on World History Day dressed immaculately as Julius Caesar,  while Lisa didn’t even remember. Also, there is Roz (Sinead Keenan), a physiotherapist who is heavily in debt and whose husband is a gambler and useless dolt. They are all class clichés. Lisa is the muddled middle. Roz is poor with a heart of gold. Kate is entitled and vile, although perhaps not as vile as her sister, who is so vile she is not, and could never be, a real person. 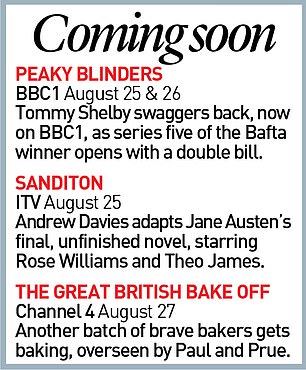 That said, there was one particularly effective scene, when Kate insists that Lisa’s son is bullying her son, whereas we know the truth is the other way around, but Lisa is full of shame and apologises because she is intimidated by the class differential. That felt like a truthful moment, like something that would happen, whereas so many of the other scenes seemed forced. Kate’s dinner party felt so forced I even died a little inside on behalf of the actors.

And it doesn’t pay attention to detail, which is something I personally can’t stand. For instance, Roz returns home one day to discover the bailiffs have been and have even taken the fridge. This seemed unlikely so I checked and (1) bailiffs can’t enter your home unless you are there; (2) they are prohibited from taking ‘things you need to live’ like ‘cooker, fridge or washing machine’; and (3) if no one can be bothered to check this sort of thing out then I just can’t be bothered to believe any of it. As we left episode one, Lisa had that quickie with the sister’s husband in the bathroom, forgetting her knickers (it was a breezy trip home), Roz is about to have sex with a creepy, wealthy man who is offering her money to do so (‘Men have needs!’) and Kate’s daughter has disappeared. I do wonder what will happen next. Except I don’t, really. All episodes are now available on the ITV Hub and I have yet to go anywhere near.

Just about enough space for a Poldark catchup, which loses one star this week because Ned has become such a crashing bore, and another star because I am so worried about poor little John Conan it’s keeping me awake at nights. Does Lady Whitworth keep him permanently in the garden? Like a dog who is sometimes thrown scraps? Is he allowed in the house on special occasions? His birthday, say? Meanwhile, my ‘For God’s Sake Give Caroline Something to Say’ campaign has foundered as she was given something to say this week – hallelujah! – but my ‘Bring Back Verity’ campaign is still very much live, and there’s a petition doing the rounds. Please sign or we’ll never know how it is going with Captain Blamey. And we can’t have that.