Deep-sea expedition to the Titanic shows new images of wreckage, including stained-glass window

A recent expedition to the Titanic has uncovered new images of the famed shipwreck, 12,500 feet beneath the surface of the North Atlantic, including the frame of a stained-glass window.

Oceangate Expeditions announced Tuesday it completed the first of numerous dives to the Titanic’s hull aboard Titan, a next-generation carbon-fiber-and-titanium submersible.

‘We had to overcome tremendous engineering, operational, business, and finally COVID-19 challenges to get here, and I am so proud of this team and grateful for the support of our many partners,’ Rush said in a statement.

The five-person submersible also recorded fragments of floor tile and other debris from the luxury liner, which collided with an iceberg and sank during its maiden voyage on April 15, 1912 around 11.40pm ship’s time, taking the lives of more than 1,500 passengers and crew.

The dive was the first of many planned to the Titanic over the next month and then annually ‘to record the ship’s rate of decay, study the marine life found on this artificial reef, and draft a GIS map of the artifacts found there’, according OceanGate’s statement.

The company hopes to create a 3-D image of what remains of the ship using 4K video and cutting-edge sonar and laser technology.

A frame of stained glass window belonging to the Titanic was among the finds during the recent maiden dive of Titan, Oceangate Expedition’s deep-sea submersible

A select number of ‘aspiring mission specialists’ can pay up to $150,000 to join the crew as they continue their research and documentation.

The guests spend about a week aboard the Titan’s support vessel, the Horizon Arctic, and get a chance to participate in a dive, GeekWire reported.

One civilian participating in the venture called the six-figure price tag a bargain, relatively speaking

‘Somebody paid $28million to go with Blue Origin to space, not even the moon,’ Renata Rojas, of Hoboken, New Jersey, told The Columbian. ‘This is cheap in comparison.’ 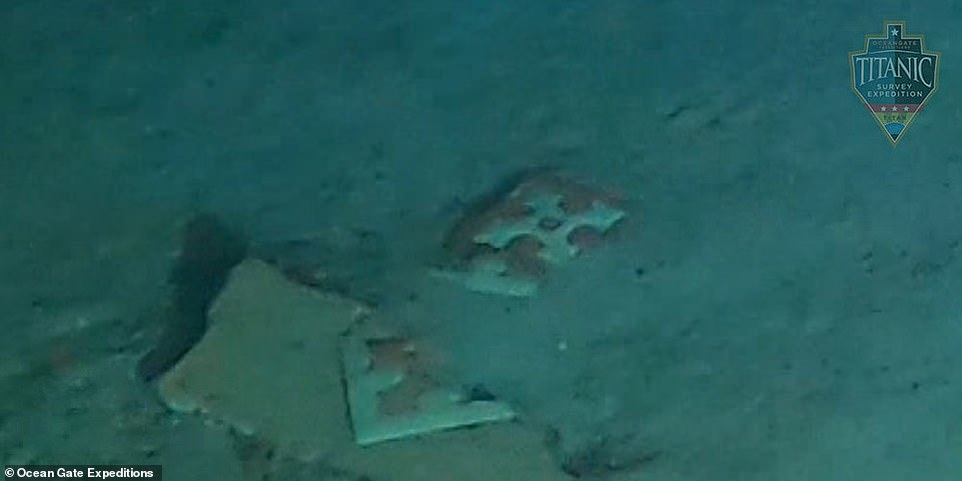 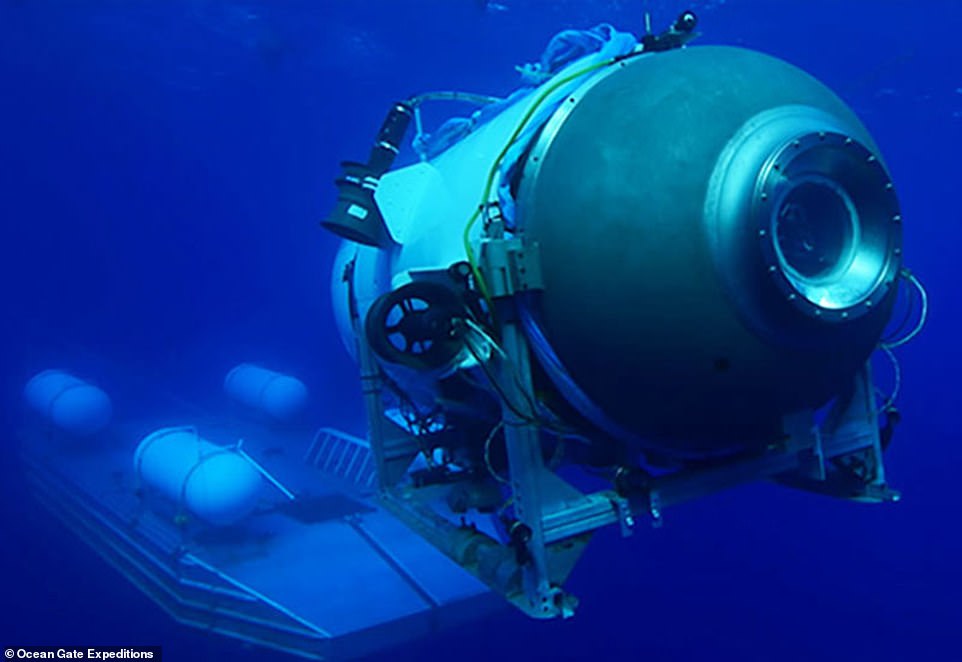 Titan, a five-person submersible, is composed of a special titanium-and-carbon-fiber hull designed to withstand the pressures at

Rojas, 53, has been fascinated by the Titanic her whole life.

‘I kind of need to see it with my own eyes to know that it’s really real,’ she told the paper.

An earlier iteration of the Titan’s hull didn’t pass muster with experts, who raised concerns it might not stand up to the extreme pressure on the ocean floor.

OceanGate’s engineers developed a new hull with guidance from NASA, according to GeekWire. 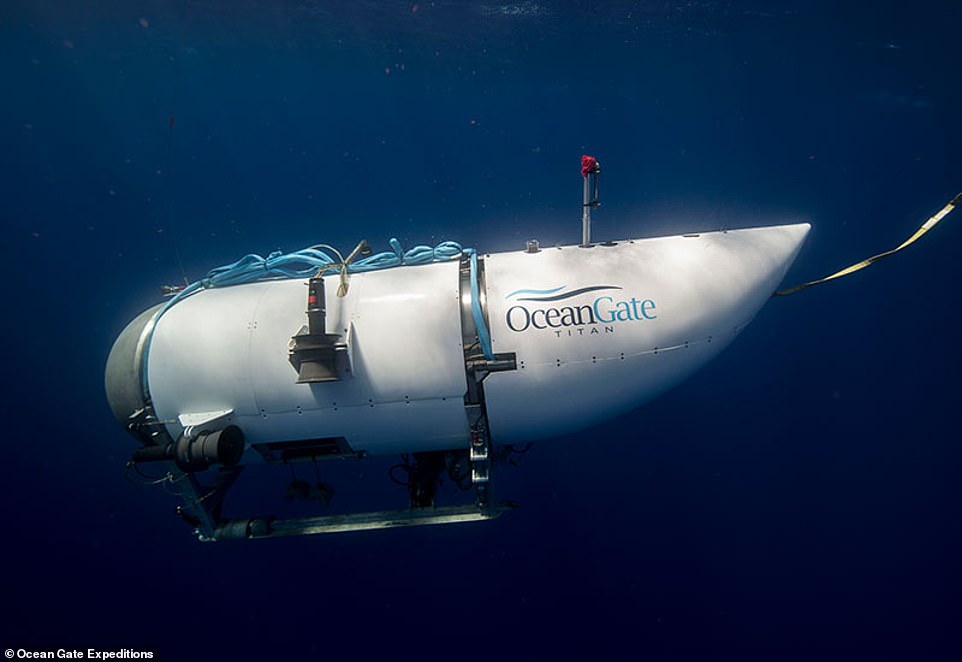 The company raised more than $18million from investors to develop the vessel and bring the expedition to fruition.

‘I have completed two deep dives in the Titan submersible: the first to 1,700 meters [5,600 feet] and then to the Titanic at 3,840 meters  [12,600 feet]. I have tremendous confidence in this submersible and the professionalism of the OceanGate Expeditions crew.’ 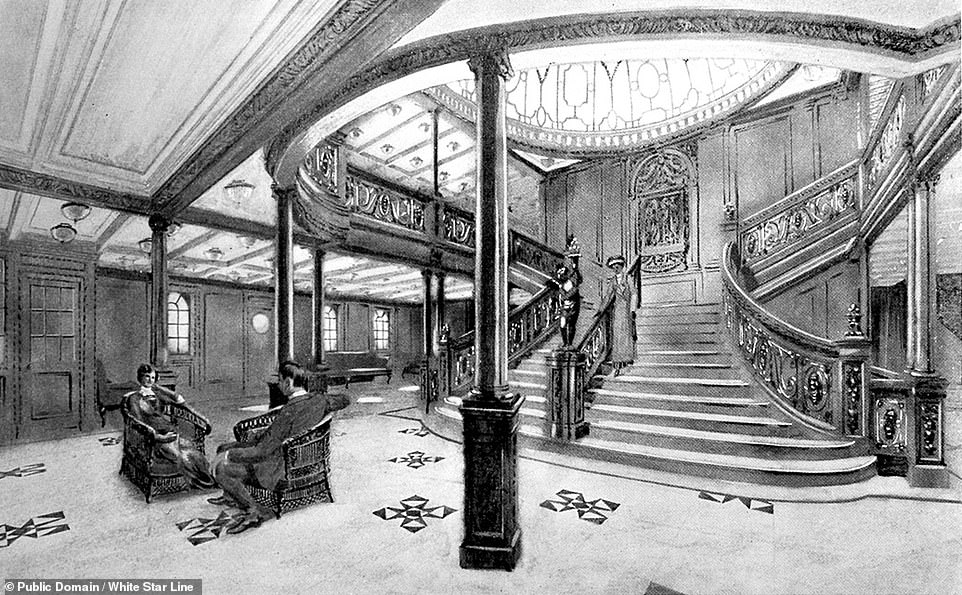 Owned by the White Star Line, the Titanic sank  on April 10, 1912, during its maiden voyage from Southampton, England, to New York. Pictured: an illustration of the Titanic’s grand staircase

But continued trips to the world’s most famous shipwreck have stirred controversy: experts believe salvage missions and other expeditions over the decades — including filmmaker James Cameron’s famed dive in 2001 — have further weakened the integrity of the 108-year-old hull.

The landing of craft on the wreck has caused substantial deterioration to the promenade deck, with some of the more significant damage caused by Cameron’s expedition, during which a submersible collided with the ship’s hull.

A rendering of Titan’s encounter with the iconic shipwreck 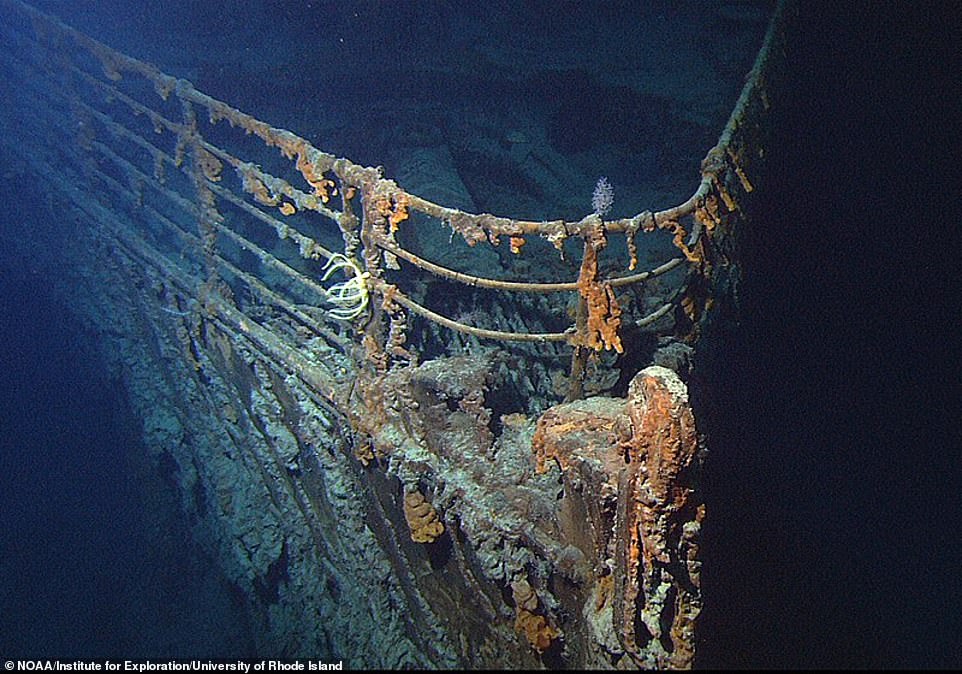 According to the National Oceanic and Atmospheric Administration, the hull of the Titanic is likely to collapse within the next 40 years.  Experts worry repeated expeditions and salvage trips will only hasten that demise

TIMELINE OF THE TITANIC DISASTER THAT KILLED 1,500 ON ITS MAIDEN VOYAGE IN APRIL OF 1912

Ned Parfett, the ‘Titanic paperboy’, outside of the White Star Line offices in London

The Titanic sets sail from Southampton to New York, calling at Cherbourg and Cork en route.

Marconi Company radio officers on the Titanic received a total of six warnings of ice in the vicinity, not all of which were passed on to the crew.

Lookout Frederick Fleet, in the crow’s nest, spots an iceberg dead ahead of the ship. Turning to port, the vessel managed to avoid a direct collision, but suffered a ‘glancing blow’ instead.

The Titanic’s final lifeboat is launched. Ten minutes later, the liner’s angle in the water increased rapidly, ultimately reaching over 30 degrees, as water reached previously unflooded parts of the ship through deck hatches.

The Titanic finally disappeared beneath the waves, some two hours and forty minutes after striking the iceberg.

According to the National Oceanic and Atmospheric Administration, the hull and structure of the ship is likely to collapse within the next 40 years.

In addition, private expeditions have removed artifacts of archaeological significance from the wreck and its surroundings without consulting historians.

The wreckage — which lies some 12,500 feet beneath the ocean’s surface — had previously been afforded a ‘basic level of protection’ by the United Nations Educational, Scientific and Cultural Organization.

But its resting place in international waters had meant it was not previously covered by explicit legislation.

In 2020, RMS Titanic Inc., which currently owns the sole salvage rights to the Titanic, announced plans to use three underwater robots to tear off of the ceiling to grab the ship’s Marconi wireless radio.

‘In the next few years the overhead is expected to collapse, potentially burying forever the remains of the world’s most famous radio,’ according to a document seen by The Daily Telegraph.

RMS Titanic says it wants to preserve the relics before they are lost forever.

Reportedly, the company would put the wireless on display at the Luxor casino in Las Vegas before taking it on a global tour.

A landmark treaty gives both the US and UK the power to grant or deny licenses to companies to enter the remains of the ship and remove artifacts.

The treaty was signed by the US in 2003, but was only ratified by former US secretary of state Mike Pompeo in November 2019.

UK Maritime Minister Nusrat Ghani said the agreement will ensure the Titanic is treated with the ‘sensitivity and respect’ the ship and her passengers deserve.

But RMS Titanic says it’s ignoring the treaty because it has ‘no teeth’ and can’t be enforced in US courts.

At the time, Gavin Robinson, DUP MP for Belfast East, where the Titanic was built, called the plan to retrieve the wireless an attempt to ‘pilfer and pillage’ a historic wreck.

‘I think it’s important that we get behind the government and make sure that there are robust efforts in place that would frustrate the efforts of those who want to simply profiteer,’ Robinson told The Telegraph.

‘The idea that a vested connection would warrant pilfering and pillaging what is essentially a tomb to the sacrifice to those who were aboard Titanic, I think it’s entirely misguided.

‘If the detail of this agreement is not sufficiently robust to frustrate their efforts, I think that’s where we need to place our attention now.’ 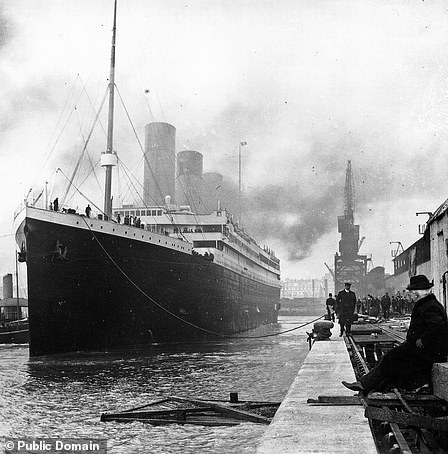 The Titanic in Southampton, England, before embarking on its fateful voyage