‘He knocked me down, but he won’t KEEP me down!’: Defiant grandfather, 80, hopes ‘prat’ road rage driver who attacked him as he crossed road with wife feels ‘ashamed of himself’

A retired bricklayer left with horror injuries including a broken wrist, cheekbone and nose in a road rage assault said today he hoped his attacker felt ‘totally ashamed’.

Paul Eva, 80, who has ten great grandchildren, was chased and pushed over by a motorist after the pair had a verbal row in the street in Penge, South East London.

The driver argued with Mr Eva, who was walking home with his wife Jackie from a barbecue for her birthday, as he crossed the road shortly before 8pm on April 21.

Paul Eva, 80, was left with multiple injuries, including a broken wrist, nose and cheekbone

The motorist then got out and followed Mr Eva down the street before attacking him. The victim was found unconscious by paramedics after hitting a wall as he fell over.

Today, Mr Eva said: ‘I just hope this guy feels totally ashamed of himself. It was unnecessary. But he may have knocked me down but he won’t keep me down.’

Talking about the attack, he added: ‘I came to the end of Penge Lane, crossed Parish Lane, my memory is a bit hazy. I was the middle of the road, when he nearly hit me.

‘There he was right in my face, according to my wife, ‘I said what’s your problem?’ All I remember seeing was him looking at me and glaring. That last few seconds, I thought ‘That’s it’. I walked away and that’s the last thing I remember.’

Speaking at his semi-detached home in Penge, he added: ‘I woke up lying on the pavement with paramedics running all around me and they took me to the hospital. 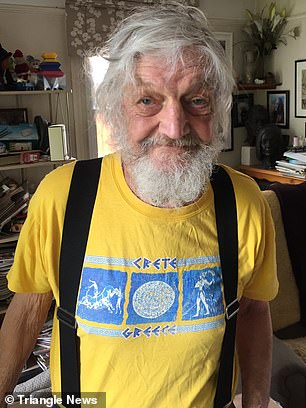 ‘I didn’t know what was going on. I was in hospital overnight. I didn’t know who the attacker is. I think he’s a prat. I broke my hand, that is still painful. I’ve just had it taken out of plaster.’

But he added: ‘I can’t think properly. One of my main things is cryptic crosswords. Now I can’t do a b****y thing. I can’t make my brain work.

‘I’m still not 100 per cent. I feel quite fragile but I’m trying to hang on to get a telegram from King William.’

Scotland Yard said the couple had almost been hit by a silver car as they crossed the road and the driver had been involved in a ‘verbal altercation’ with Mr Eva.

Mr Eva walked away but the suspect pulled over, got out of the vehicle and chased him before shoving him in the back, police said.

Detective Constable Luke Thomson, the investigating officer, said it was a ‘brutal attack’. 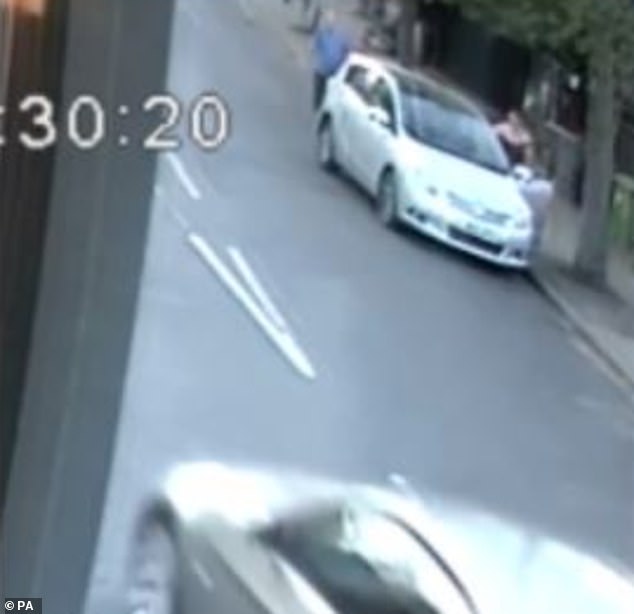 He added: ‘The victim has suffered horrific injuries as a result of a nonsensical attack, which could have cost him his life. There is no place in society for unlawful and aggressive acts such as this.’

Police are appealing for help in tracing the suspect, who is wanted on suspicion of causing grievous bodily harm.

He is described as a white man, aged around 40, about 5ft 10ins to 6ft tall and of large build with a bald or shaved head.

He was wearing a light blue T-shirt and dark blue shorts. There was also a female passenger in the car.