A delivery driver was left screaming in agony after a dog bit part of her finger off when she pushed a ‘missed collection’ card through a letterbox.

Aimee who does not want to give her last name, had been finishing her morning shift on May 9 at around 11am when she knocked at the property near her home in Welling, south east London.

The dog savaged the 32-year-old’s hand as she pushed the card through the stiff opening and she lost the last knuckle of her middle finger.

She said she had been slotting a ‘sorry we missed you’ card through the door when the dog clamped down on her finger.

The 32-year-old eventually managed to get her hand free but left behind the tip of her middle finger.

She was rushed to hospital but surgeons were unable to attach her finger tip. 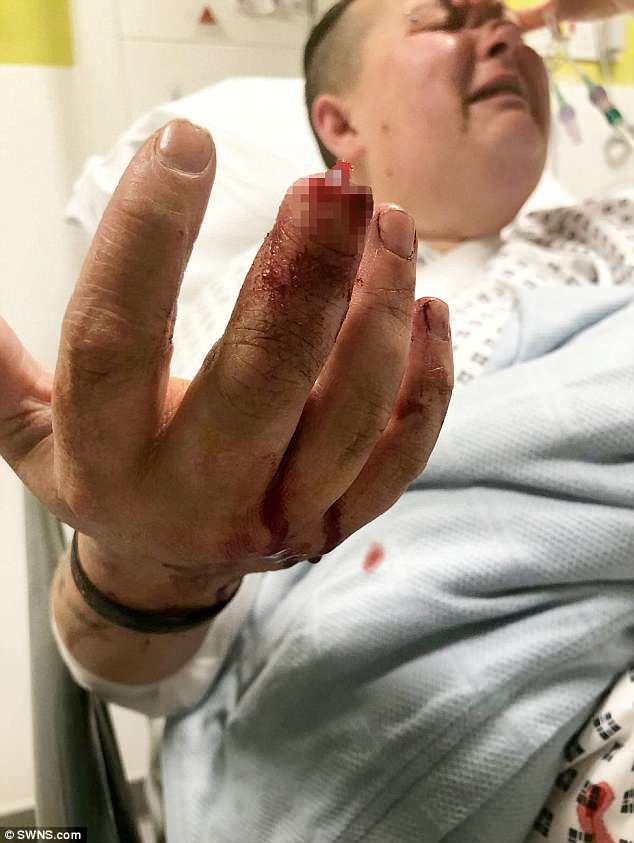 The 32-year-old was left screaming in agony after the attack, which happened near the end of her shift on May 9

Aimee said: ‘I didn’t even put my hand in the letterbox, I went to post the card and the dog caught the tip of my finger and pulled my hand, and it took another bite, and another bite.

‘When I pulled my hand out I was missing the tip of my finger and it had split down the middle – the inside was exposed.

‘The pain was excruciating.

‘I knocked on the door and waited, but I couldn’t hear anything, so procedure says I should put a ‘missed delivery’ card through the letterbox. 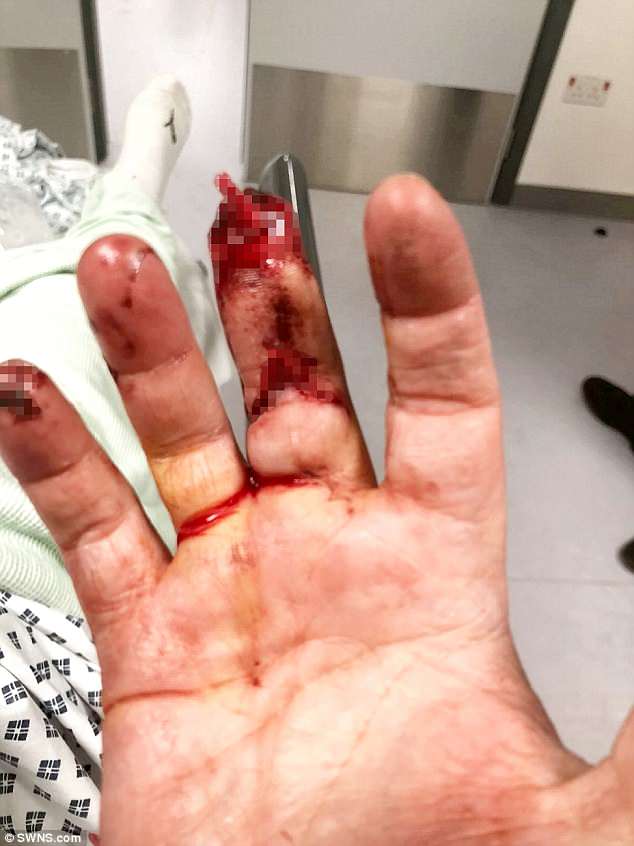 The horrific injury left a piece of Aimee’s bone sticking out of her finger, leading to surgeons using 11 stitches

‘The dog inside didn’t make a peep – it’s like it was lying in wait.

‘There was no sign on the door to say there was a dog there, no cage around the letterbox and no external letterbox.’

It is not clear what type of dog savaged Aimee, but it is believed to be a mastiff-type.

A pedestrian stopped to help Aimee as she screamed after she got her hand free of the letter box. 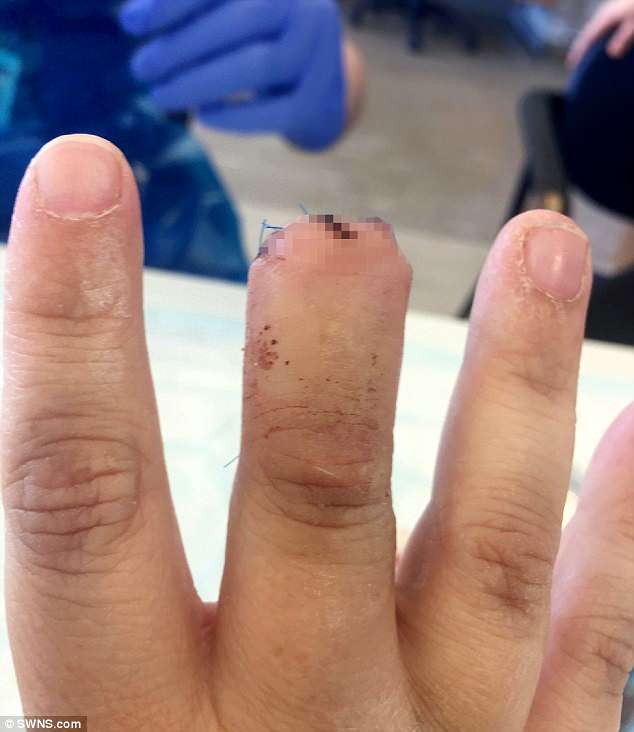 Despite the stitches and medical attention, doctors were unable to reattach the tip of her finger

An ambulance was called and she was attended by paramedics before being taken to Queen Elizabeth hospital in nearby Charlton and later to a specialist wing St Thomas’ hospital in central London.

The owner of the dog returned while Aimee was being treated at the scene and had to let in the paramedic to retrieve the tip of the finger.

She said: ‘They did everything right, they got me there quick enough but it was too badly damaged. 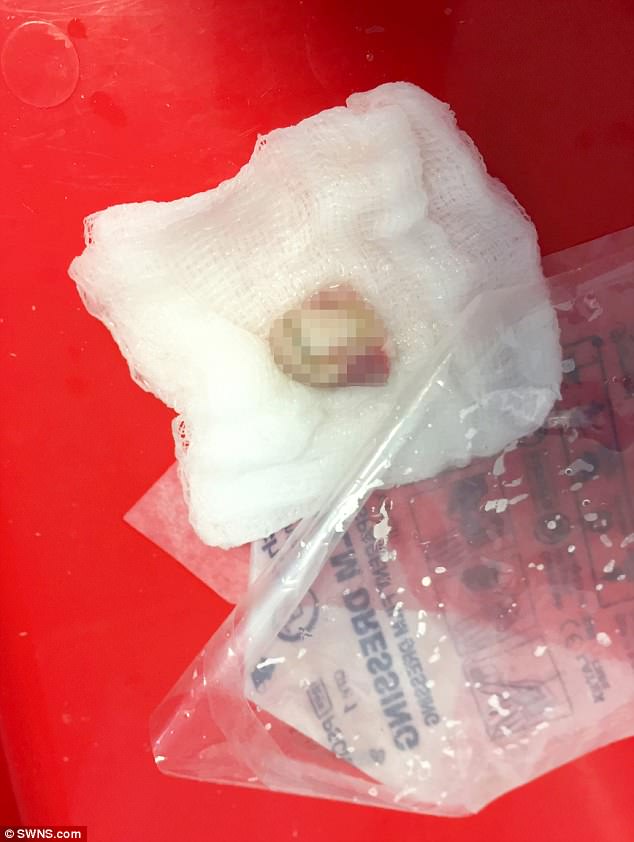 Aimee is now unable to drive as she has no feeling in the finger, which is on her right hand

‘The dog had bitten into the tip of the finger that still had bone in it.’

Doctors had to put 11 stitches to close up the top of Aimee’s finger, but were unable to reattach the tip.

The injury has left Aimee unable to drive as she has no feeling in the finger on her right hand. 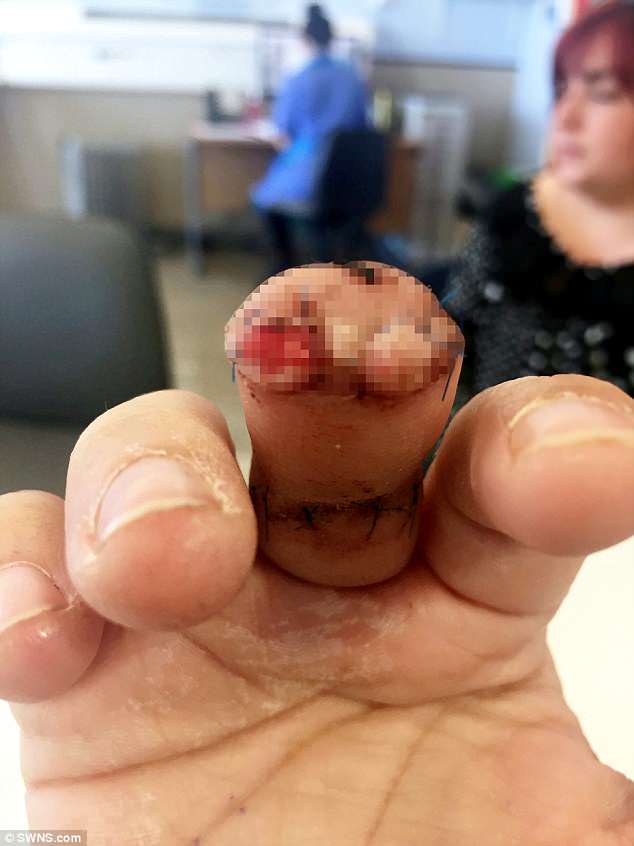 Her shocking experience has left her terrified of letterboxes, dogs and even knocking on doors

She is also looking for another job because she’s now terrified of letterboxes and too scared to knock on doors.

She said: ‘I loved dogs. I did before this happened – now I’m terrified of them.

‘Any customers if they had a dog I had no problem. They are generally quite friendly.

‘I still have no feeling down one side of my finger and am still unable to bend the knuckle I do have left.

‘I have got to have hand therapy, they were also talking about a prosthetic that goes on the top.

‘I’m quite traumatised by sticking my hand anywhere, knocking on a door or going near a letterbox frightens the life out of me. 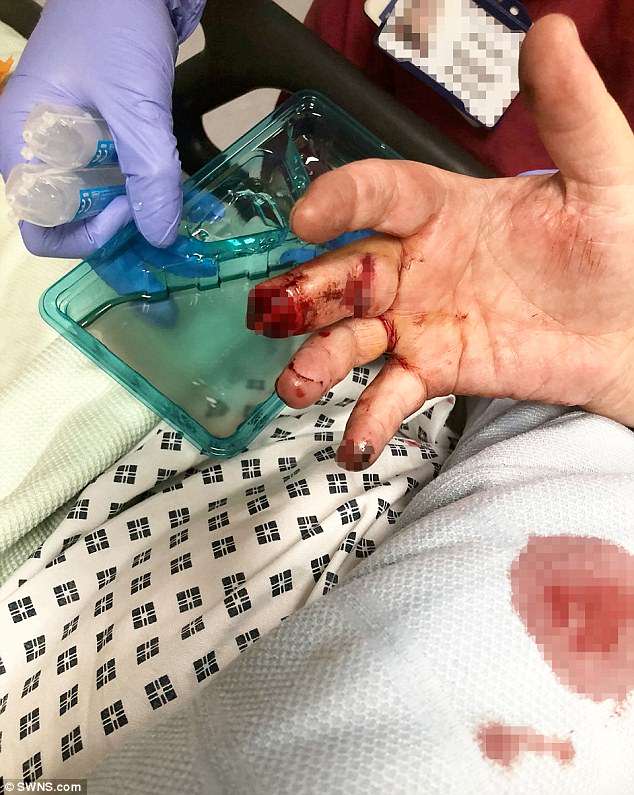 ‘Anything to do with the unknown where my hands or fingers are concerned, it makes me very anxious.’

However, she praised the delivery company she worked at and said it has been ‘nothing but amazing’ after her complaint.

She said: ‘They have seen dog bites before but they have never seen something this serious and in this area.

‘I have asked [the company] to use a post clip, it’s something postmen use to post smaller things through letter boxes so this doesn’t happen.