Delta Air Lines will require medical screenings for passengers who can’t wear face masks due to health concerns – and even suggest they simply stay home.

The latest policy change will accompany Delta’s face mask mandate that ensures customers wear them on flights, during boarding and in waiting areas at airports.

Delta appeared to be the first US based airline to implement pre-departure medical screenings in tandem with its coronavirus-era public health protocols.

‘We encourage customers who are prevented from wearing a mask due to a health condition to reconsider travel,’ the airline said in a statement.

‘If they decide to travel, they will be welcome to fly upon completing a virtual consultation prior to departure at the airport to ensure everyone’s safety, because nothing is more important.’

Delta’s new policy comes after the Center for Disease Control and Prevention strengthened its call for Americans to don face coverings amid the coronavirus pandemic.

‘Cloth face coverings are one of the most powerful weapons we have to slow and stop the spread of the virus, particularly when used universally within a community setting,’ said Director Robert Redfield in a statement.

The new ‘Clearance-to-Fly’ virtual consultation will be done over the phone by the STAT-MD, a company that does ground-based medical support, and passengers will be connected to a medical professional.

Delta Air Lines will use the results of the consultation to determine if passengers will take flight.

Air travelers who do not have clearance from STAT-MD, or ignore the mask mandate, risk being barred from future flights with Delta. 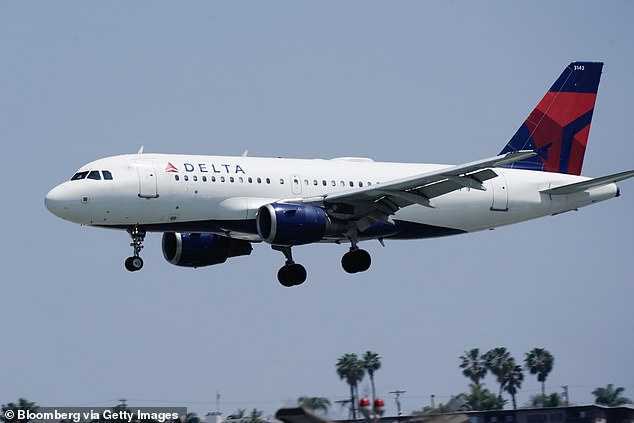 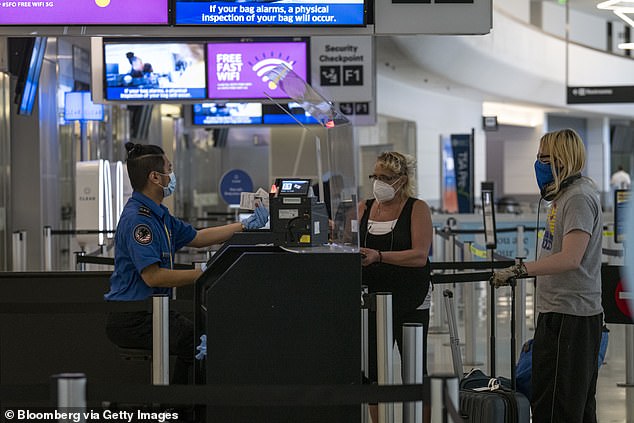 Several airlines, including Delta and Spirit, have required all passengers to wear face masks during flights to stop the coronavirus from spreading among travelers

Delta officials asked that people scheduled for the Clearance-to-Fly screening arrive early to the airport to allow enough time for the process, which can take upwards of an hour. Those who are denied will receive a refund for their tickets.

WJLA reports that travelers who would be considered exempt include: people who are physically unable to apply or remove their own face masks, children under age 8 who cannot maintain face masks without hurting personal safety, people with autism or other disabilities and those who use self-contained oxygen that would be compromised by a mask.

Delta CEO Ed Bastian revealed in a memo that he had already ‘banned some passengers’ from future flights because they refused to wear masks, CNN Business reports.

The protocol went into effect on Monday and will remain until the end of 2020.

DailyMail.com has reached out to Spirit Airlines, United Airlines and others to learn if they have such health protocols in place.

But several have similar mask mandates that were implemented as airports shuttered during the pandemic and air travel sputtered to a near-stop.

United Airlines has a mask mandate and said those who do not wear one could be put on the restricted travel list. American Airlines asked all passengers – except those with children or disability – to wear face coverings during flights.

While individual companies have implemented rules, Bastian believes more regulations should be made by the Trump administration. 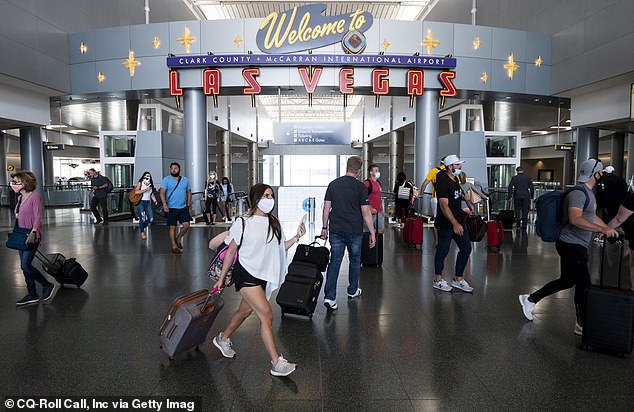 ‘We’ve had those discussions with the White House,’ said Bastian.

‘I feel strongly about it, but I’m not sure some of my peers and other airlines feel the same way. So as a practical matter, I’m not sure it’s gonna happen.’

President Trump’s stance on face masks had wobbled repeatedly, but he was spotted wearing one for the first time in July – even though lockdown orders were imposed in March.

Transportation Secretary Elaine Chao said at a June event hosted Politico that she was against a federal face mask mandate.

She said decisions should be made by individual airlines and frontline workers who risk the most if the infection is spread.

‘When the federal government gets involved, we tend to be much more heavy handed, we tend to be inflexible, and once we put a rule in place, it takes a long time to remove that rule if conditions change,’ she said.

The United States has surpassed more than three million confirmed infections and 143,000 deaths.

Just last week. three people on a Delta Air Lines flight from Atlanta, Georgia, to Upstate New York tested positive for the virus and started showing symptoms one day after their trip. 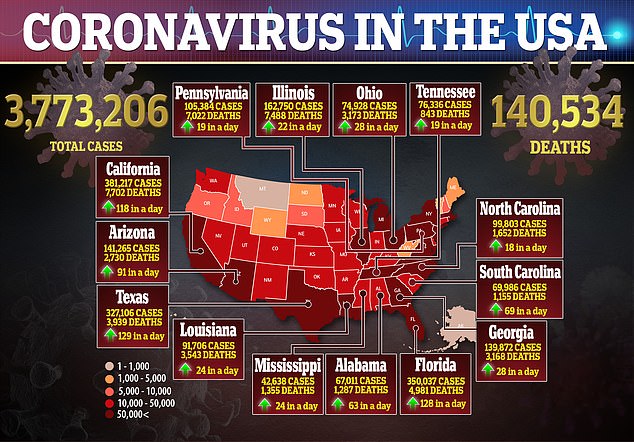 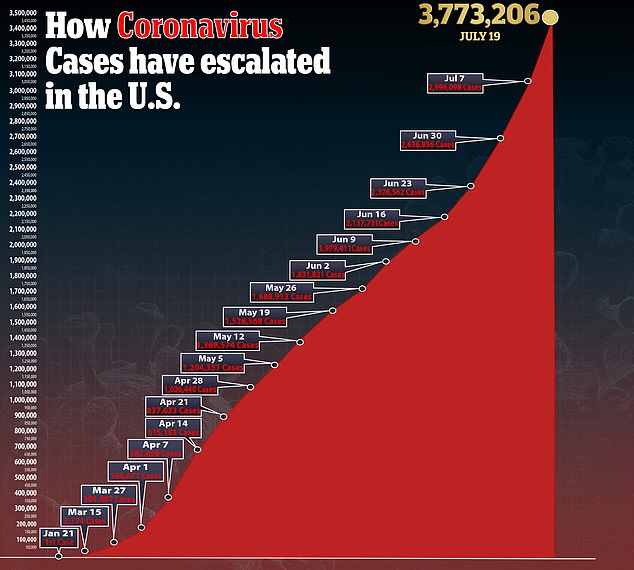 Officials said 44 other passengers were on that flight and encouraged them to undergo coronavirus testing as soon as possible.

In addition to its mask mandate and new pre-departure screening, Delta has barred the middle seat on planes from being used.

Delta’s chief customer experience officer Bill Lentsch said in a statement that ‘reducing the overall number of customers on every aircraft across the fleet is one of the most important steps we can take to ensure a safe experience for our customers and people’.

Research released on Monday also backed up that statement.

The data shows that barring the middle seat on airplanes may cut the risk of contracting COVID-19 by nearly half.

Using publicly available statistics on social distancing and COVID-19 transmission, Barnett found that a person faces a one in 4,300 chance of being infected with SARS-CoV-2 while flying on a plane with every middle seat filled.

Those odds fall to just one in 7,700 when flying on a plane where no middle seat tickets are booked, according to a report on Barnett’s research in ZDnet.

Footage of passengers being removed from flights over their refusal to wear a face mask has become more common as coverings become increasingly politicized.

Over the weekend, it was revealed a 42-year-old fitness model from Kelowna, British Columbia claimed she was kicked off an Air Canada flight for not wearing a mask

But she argued that she had a doctor’s note that said face coverings, in her case, could cause panic attacks.

Before that a disgruntled passenger was kicked off a Spirit Airlines flight heading to Florida from New York City for refusing to wear a face mask.

Footage of the tense exchange between the man and a Port Authority officer went viral on social media after people were outraged over the strict rules.

In June, a Trump supporter who refused to wear a face covering during an American Airlines flight was removed by officials.

After being refused on the flight, he condemned the incident as ‘absolutely insane’ and said ‘we don’t even have a choice anymore’ in a video on social media. 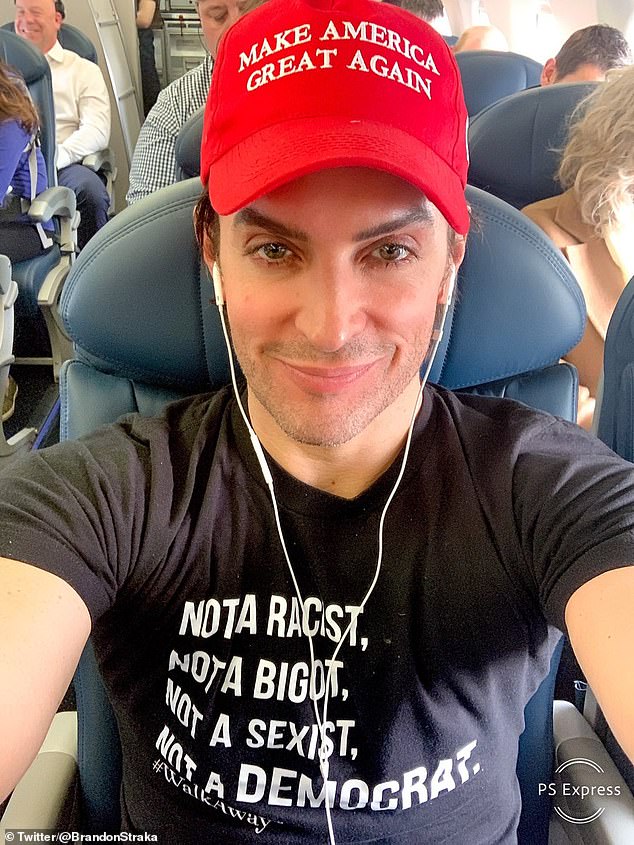 On social media, conservative activist Brandon Straka described the incident as ‘absolutely insane’ and said: ‘We don’t even have a choice anymore’ (File image o fStraka on plane in MAGA cap)

In a statement, American Airlines said: ‘After he refused to comply with the instructions provided by the flight crew, our team members asked him to deplane.

‘He deplaned and the flight departed the gate four minutes late at 12:34pm ET.’

In a tweet following the incident, the man said: ‘I was just removed from my flight for not wearing a mask. 1st time this has happened. Not a federal law.

Although footage of Delta Air Lines passengers being removed from flights hasn’t circulated, there were forced to pay a $50,000 fine in January for removing a three Muslims off of two separate flights because others complained they were ‘nervous.’