A black woman has shared video of a white customer service representative calling police on her when she asked to speak with a manager.

Arlene, who has asked only to be identified by her first name, said she had gone to the customer service desk after discovering her suitcase was ripped during her Delta Airlines flight from Kentucky to Massachusetts on August 28.

A manager arrives to speak with her but is quickly called to a medical emergency and leaves, directing one of the other staff to help Arlene fill out her claim.

At the end of completing her claim, Arlene asks for the name of the manager on duty for her notes, but the woman serving her – who has been dubbed ‘Baggage Service Becky’ on social media but identified herself as Teddra in footage of the incident – declines to give it to her.

She told Arlene it was against Delta policy to give out names that are not a representative’s own, and refused to call the manager back over to speak to Arlene in person or agree to give his name.

Arlene is heard in the footage asking for a business card or a location where she could find him, and offering to wait for him to return.

Each time, Teddra declined to help, claiming she was unable to contact the manager in any way or give his name.

‘He’s not going to be able to come back down here,’ Teddra told Arlene, who responded, ‘But I need his name for my claim.’

Finally, Teddra realizes she is being filmed, and quickly picks up the phone and asks to be put through to state police.

‘Hey, Frank, it’s Teddra. Can I have the state police in baggage, please?’ she says.

‘I have a lady who is in my face recording me and won’t leave the office.’

In a statement shared to Twitter, Arlene said she left the office immediately afterwards as felt Teddra’s phone call was racially motivated and she feared an overzealous police response.

‘I have never been so humiliated in my life,’ she wrote. ‘I was afraid when she called the state trooper, given all the unarmed police shooting in the world we live in.’

Arlene shared her experience in text form on Twitter when the incident first happened, and tagged Delta, who said they would investigate the incident.

The business owner says nothing happened past that interaction, despite telling Yahoo Lifestyle she contacted the airline a further three times. Arlene (pictured), who owns her own business, says she only wanted the manager’s name for a damaged baggage claim, and left the office immediately after Teddra’s phone call to the police as she was scared the situation would get out of hand

When she released the video, Arlene claims Delta asked her to remove it, and finally addressed her allegations.

In a new statement, Arlene told followers a corporate executive contacted her and gave an update on the situation.

‘[The executive] informed me she had spoken with customer service representative, Teddra, and that Delta does not believe the incident was racially motivated,’ she wrote.

‘I asked her why did Teddra Hegel call the police, she said she didn’t know what to do – she should have called the manager as requested.

‘As a gesture they offered to pay for my bag and give me a $300 credit to the airline, which I declined.

‘I will continue to spread awareness, and it is my hope that this doesn’t happen to anyone again.’ 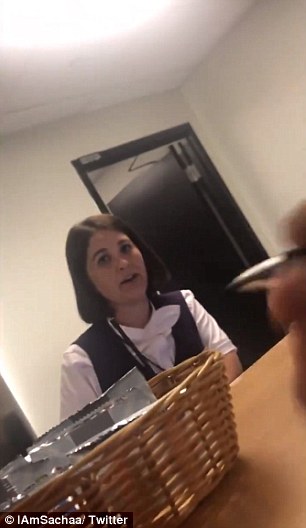 Delta have contacted Arlene and apologized, but said Teddra’s actions were not racially motivated