The housing market has seen a bounce back as both buyers and sellers shake-off Brexit fatigue, a new property report has revealed.

Demand for property from prospective buyers reached an eight month high in May, according to figures from NAEA Propertymark.

The number of property hunters registered per estate agent branch saw an increase of 16 per cent in May – rising from 265 to 307.

This is the highest level recorded since September 2018, when 338 prospective buyers were registered.

The supply of available housing has also jumped to its highest level since December 2018 – increasing from 35 properties available per member branch in April to 41 in May.

This also marks an annual increase as only 37 properties were listed per branch in May 2018.

However, housing demand is down year on year by 13 per cent from May 2018 when there 351 house hunters per branch.

Waning Brexit fatigue has been named by the professional body for estate agents as a reason – buyers and sellers are no longer waiting for the outcome to decide their next move.

While many had expected Britain would leave the EU in April, uncertainty over the future rumbles on and a new expected leaving date of 31 October has now been set.

It is worth pointing out, as well, that a higher number of property hunters is likely to be driven by seasonal demand.

Mark Hayward, chief executive of NAEA Propertymark, said: ‘It is encouraging to see the housing market bouncing back, with supply and demand rising to the highest levels seen since last year.

‘It’s evident that buyers and sellers are no longer waiting for the outcome of Brexit and want to get things moving, particularly as many sellers are realising that it’s a buyers’ market in certain areas of the country.’ 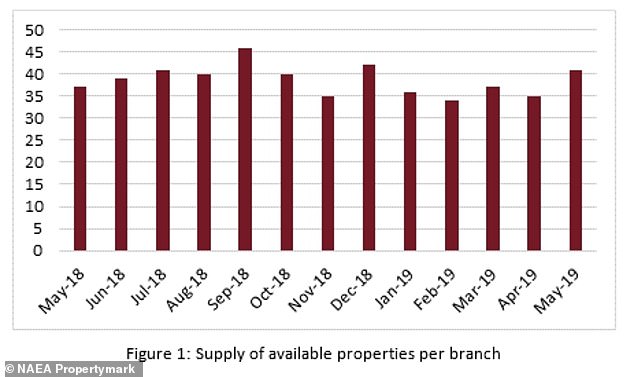 Supply: September 2018 saw the highest number of available properties per branch in a year

Meanwhile, the number of sales agreed per member branch increased slightly for the second month running – rising from an average of eight per branch in April to nine in May.

Although a small change, this is the highest level of sales since September last year, when the same number of sales were recorded.

The number of property transactions has also increased annually with an average of eight sales agreed per branch in May 2018.

Last month, 81 per cent of properties sold for less than the original asking price and five per cent sold for more.

Hayward added: ‘More than eight in 10 properties sold for less than the original asking price in May, which shows that estate agents, with buyers and sellers, are successfully negotiating a property sale, with them coming to an agreement on the value of the home.’

However, the number of sales made to first-time buyers in May decreased marginally, falling from 27 per cent in April, to 26 per cent.

This is a year on year increase of two percent from 24 per cent.

Patrick Alvarado, director of central London estate agency Nicolas Van Patrick, said: ‘Buyers are beginning to re-emerge as they have had enough of putting decisions on hold while Brexit is no nearer to being resolved.

‘There may also be a feeling that they can negotiate the bottom of the market before prices start to go up again.

‘There is still a scarcity of stock on the market and certainly not enough to meet all the pent-up demand.

‘But with buyers starting to transact again, if you have a good property priced at the right level you will sell it, and if it is really good it may even go to sealed bids.’