After finding fame as the heroine of TV’s Poldark, ELEANOR TOMLINSON – here modelling spring’s most romantic looks – is heading to Hollywood. But how will this self-confessed ‘highly strung’ homebody cope in La-la Land? By channelling her inner Demelza, of course…

Life can be tough for a young actress. You win the role of your dreams aged 21, become the star of a hugely successful series, wow the nation with your acting… OK, so far not so tough. But fast-forward five years, the show you’re synonymous with finishes and no one can imagine you as anything other than an 18th-century maiden. Your career has peaked already and you’re only 26. What do you do next?

You could always do what Eleanor Tomlinson (or Demelza Poldark, as you probably know her) did – film some racy sex scenes with Keira Knightley. It was in Colette, the eponymous movie about the belle époque writer and feminist trailblazer, that Eleanor finally shed the career-defining role that made her famous. As a lusty American heiress with a come-to-bed gaze, Eleanor’s character has an affair with Colette (Knightley) and her husband (Dominic West).

So having kept her kit on throughout five series of Poldark, and famously saying that she was unlikely ever to strip on screen, what convinced her to lose her inhibitions for Colette? ‘I have always said that if it was the right role I would consider doing it [a sex scene],’ she says. ‘I felt, “What better film than one that is about women celebrating each other?” It’s very beautiful – about female relationships, sexuality and exploring independence.’

We are sitting in an ornate room in a grand house in the depths of Surrey where Eleanor has just been photographed. She has changed out of the floaty, romantic dresses from the shoot and into the off-duty clothes she’s more at home in: her country girl uniform of tight Levi’s jeans, stack-heeled brown boots and the cream Anna October jumper that she’s wearing on page 32, which she fell so in love with she decided to buy it. Her hair is red – ‘I am blonde naturally, but I’ll stay [Demelza] red.’ 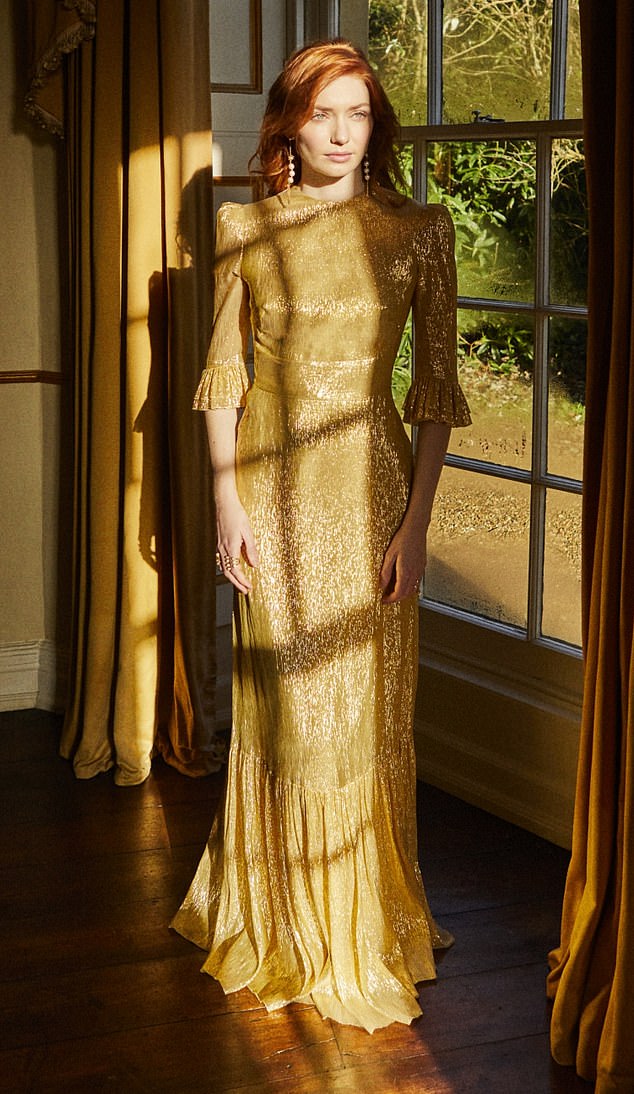 She is still filming the last few episodes of the final series of Poldark, but when that’s over her immediate plan is to head directly to Los Angeles to try to break America. At least there she won’t be ‘Demelza’; she’ll be just another beautiful, talented British actress, chasing the big dream.

It’s hard to imagine how Eleanor will fare on the ruthless Hollywood audition circuit, though. She describes herself as ‘passionate and highly strung emotionally’. She cries easily, is heartbroken if she misses out on a part she wants, and ‘really can’t cope’ when something at work upsets her. ‘Sometimes I find that with people as well.’

I don’t like letting people in. I prefer to keep my life very private

She is also something of an eccentric; a little out of step with the hectic modern world, in which your worth is measured by how much of yourself you are willing to expose.

‘I don’t like letting people in,’ she says. ‘I prefer to keep my life and Eleanor very private.’ It is quite revealing that she refers to herself in the third person; indicative of how fiercely she guards her personal life. It has been reported that Eleanor had a relationship with Harry Richardson, who played Demelza’s brother Drake in Poldark, and before that Ben Atkinson, who was a stunt double for Aidan Turner (Ross Poldark); but she’s refusing to talk about her love life today.

She has, grudgingly, started using social media: ‘I have Instagram, but I am only just getting to grips with it. I am so bad with technology, but I like being like that. I don’t want to splash around what I am eating. But at the same time in this world, sadly, as actors, you have to have a following on social media, otherwise they will employ someone else.’ 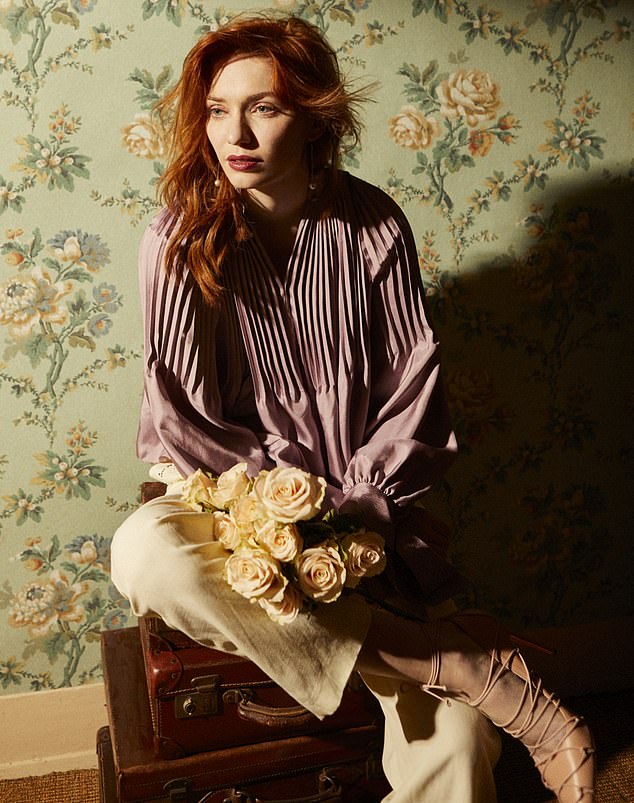 I’m not sure how many jobs Eleanor’s Instagram will get her – it’s mainly populated with pictures of her red collie Bert. ‘Here he is!’ she says, grinning as she shows me a photograph of him dressed in leg warmers. ‘He sleeps on my bed, he shares my food. I am one of those terrible dog owners that should have more restraint.’

She is passionate about animals, which is one of the reasons why she accepted the opportunity to be an ambassador for Radley, the British accessories brand that supports the Dogs Trust with capsule collections that help raise money for rescue puppies. She’s thrilled about this new role and the ‘Eleanor’ bag (‘I never thought I would have a bag named after me!’) but I suspect she’s even more excited about the connection to the Dogs Trust. 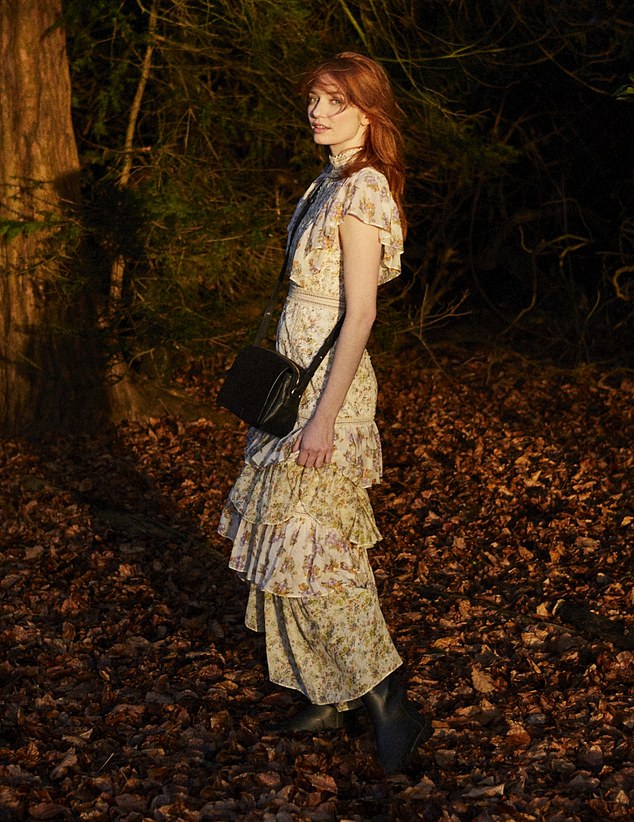 She finds the company of animals deeply reassuring. ‘Sometimes an animal just gets you – there’s loyalty and there is unconditional love in their eyes.’ Eleanor says she has a small group of friends to whom she is very close. ‘But none of my friends know each other – they are all stand-alone friends. I am a one-on-one person, I am not good in groups. I am very sensitive to vibes and energies. That is probably why I love animals.’

Fashion houses are desperate to have her showcase their creations. The evening before we meet Eleanor attended The Fashion Awards at London’s Royal Albert Hall in a JW Anderson chainmail dress (‘underneath I had heat packs everywhere’) but the glitzy trappings of fame that many actresses consider a perk of the job are not important to her.

Demelza has taught me who I want to be. I have taken on her strength

Although Eleanor has a flat in West London, she’d like a permanent home in Bristol, where she has been living while filming Poldark. Ideally, she wants a rambling old place that she could fill with ‘crazy antiques and animals’.

Her anti-celebrity checklist continues: she doesn’t meditate, isn’t vegan – ‘hell, no!’ – and doesn’t do yoga, although she does see a personal trainer ‘and whenever we’ve done a good session we go for a bacon sarnie’. She says the place she feels happiest is at home with her family.

This isn’t such a surprise when you consider that she started acting aged 11, and spent much of her childhood on film sets. Eleanor’s father is Malcolm Tomlinson, who played the villainous Bruce Baines in Emmerdale; her mother is Judith Hibbert, a singer and comedian who tours the UK with her one-woman show. ‘I used to watch my father on set and my mum on stage. I loved seeing the fun they were having.’ Her younger brother Ross is also an actor. 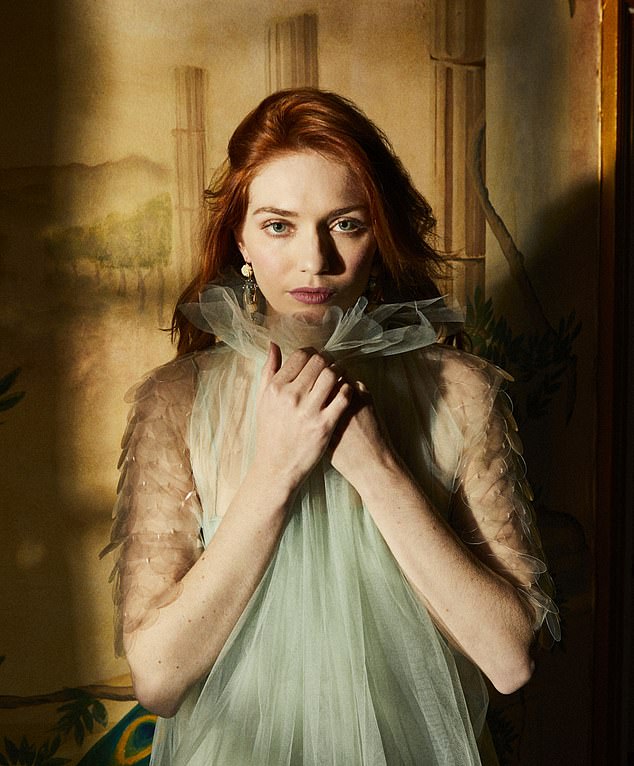 Eleanor was born in London, and when she was two the family moved to Yorkshire for ‘a better way of life. I grew up in this beautiful town called Beverley in a house that was my grandmother’s.’ Her days were spent walking the family collie cross Ben or riding her horses (she has been riding since the age of two) but she always knew she wanted to be an actress. She persuaded her father’s agent to represent her and worked constantly during her teens, with parts in films such as Jack the Giant Slayer with Nicholas Hoult.

Then she was sent the script for the new BBC adaptation of Poldark, Winston Graham’s epic literary cycle. The first season in 2015 had viewing figures of more than seven million, and the nation was sent into a state of giddy mayhem when Eleanor’s onscreen husband-to-be Ross Poldark took off his top to cut down some overgrown wheat.

He may have stolen the headlines, but Eleanor was resplendent as Demelza, playing the part with all the passion it demanded. ‘She has taught me something about myself and who I want to be,’ says Eleanor. ‘I think I have taken on her strength and the way that she deals with situations. She knows her roots, she knows where she has come from.’ 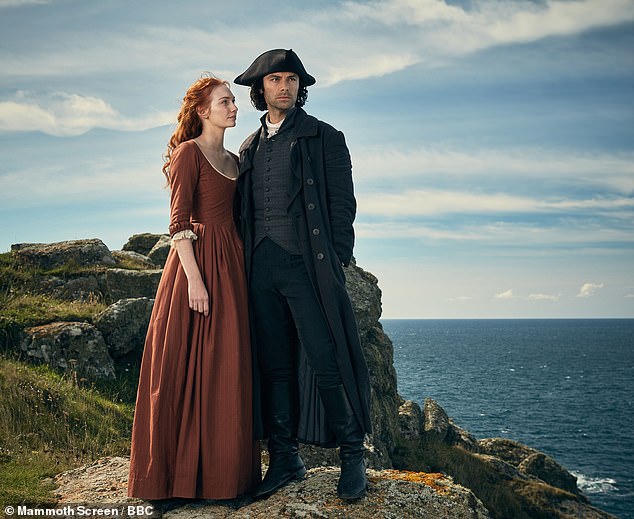 ‘What, have ye no wheat to scythe today?’ Eleanor as Demelza with Aidan Turner in Poldark

When our hour is up, we emerge from the room where we have been talking to find that all the shoot crew have left and we are alone in the vast house in the middle of nowhere. Eleanor has a car waiting to take her to Paddington station where she will catch the train to Bristol for her final days of shooting Poldark.

‘Is there any chance I could, er, you know, share your cab?’ I say, knowing that this is against the protocol of celebrity interviews – but I have no car, no reception on my phone and no desire to be stranded in this cold house. ‘Of course, no problem,’ she grins.

On the ride back to London – now that the recorder is off – she talks warmly and openly, telling me about her love for her family and funny Tomlinson traditions (like still persevering with Father Christmas even though Eleanor and Ross are both in their 20s).

As we hug goodbye, I say ‘good luck’ – and I can’t help thinking again that this sensitive homebody, who loves her dog and her privacy, is going to need it when she lands at LAX. 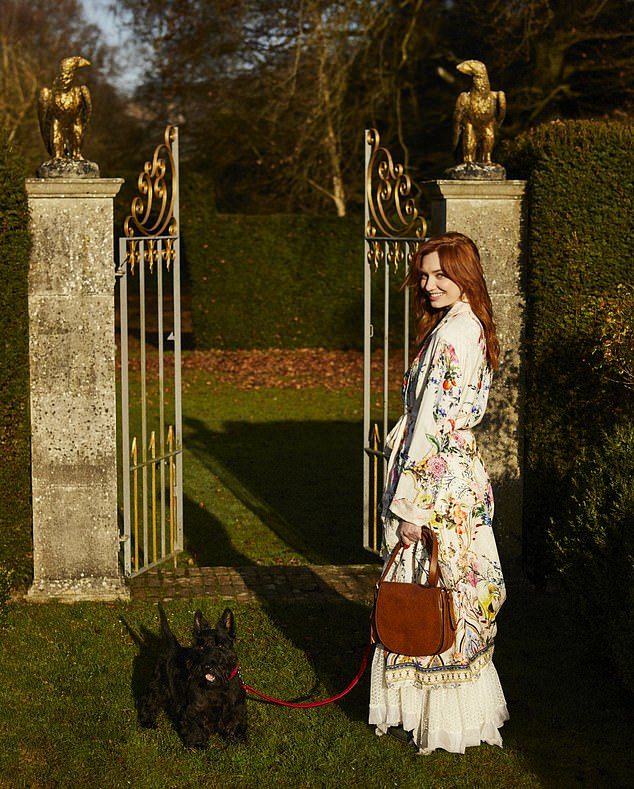