Thousands of dementia patients could soon benefit from an app that reminds them how to do simple tasks.

The charity Alzheimer’s Society has awarded £100,000 to the ‘How do I?’ app, which reminds sufferers how to boil a kettle, for example, with ‘how to’ videos.

Juice Drops, sweets that are 90 per cent water, received the same financial backing after wowing a panel of judges from the charity.

The app and sweets could help up to 120,000 people living alone with dementia, the Alzheimer’s Society predicts – a figure that is set to double in the next 20 years.

Thousands of dementia patients could soon benefit from an app that reminds them how to do simple tasks such as boiling a kettle. Pictured, How Do I? in use 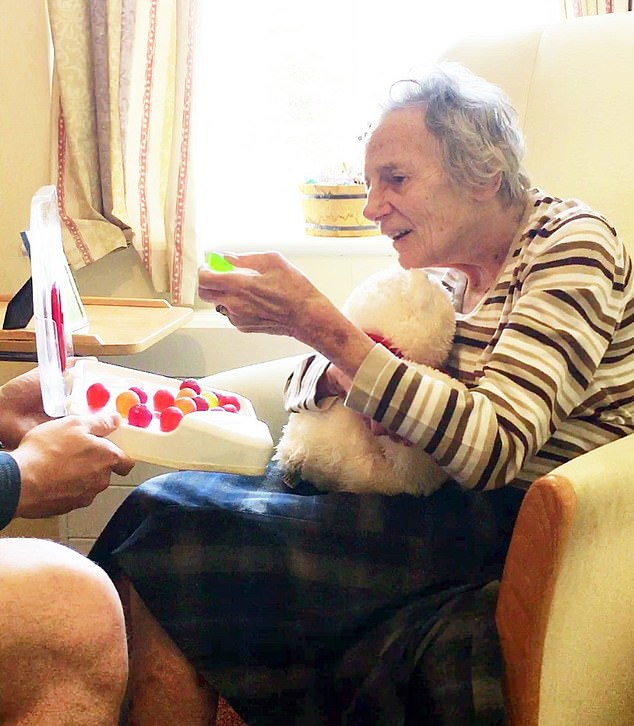 Dehydration is a huge problem in people with dementia. Lewis Hornby is behind Juice Drops, pictured being eaten by his grandmother, Pat, who was hospitalised with dehydration after forgetting to drink enough water 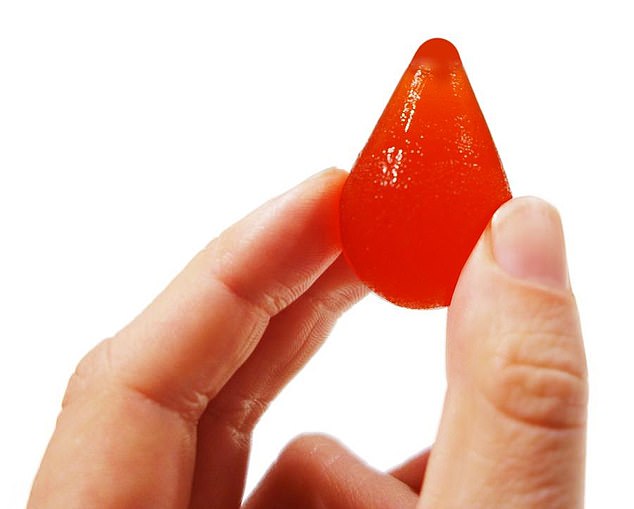 Juice Drops are sweets that contain 90 per cent water in various flavours. The product received £100,000 in funding by the Alzheimer’s Society

Almost 50 people submitted ideas they thought could improve the lives of people with dementia to the Alzheimer’s Society, in the first year of a new funding scheme.

The devastating disorder causes memory loss and difficulties with thinking, problem solving and doing simple tasks. It gets progressively worse over time.

Dementia strikes people emotionally as well as physically, affecting their communication and interactions with people they once knew very well but who now feel like strangers.

Around 850,000 people are estimated to be living with dementia in the UK. Around five million live with it in the US. Rates are expected to rise as people live longer.

At first, someone with dementia may be able to continue living at home. But it’s likely they will end up needing help with daily activities such as housework, shopping and cooking.

The How do I? app, which already exists, was initially made by the company of the same name to help people with learning disabilities.

The funding will be used to refine the app so the needs of those affected with dementia can benefit, too.

Patients will be able to record videos on the app, like a video diary, which will remind them of their routine and how things work in their own home.

As well as this, families can input photos and videos that remind the dementia sufferer of treasured memories.

How Do I? chief executive Taryl Law, who was thrilled with the funding, said they are in the process of figuring out the best way to prompt people to use the app.

She said: ‘Right now, people affected by dementia are usually prompted to access the content by their carer or loved one.

‘We also use bright and easily-identifiable contactless stickers to launch the video content. This works for a lot of people, but we know it won’t work for everyone.’

Rachel, whose partner David has dementia, has been trialling the app and said: ‘Video can capture so much more detail than a photograph can.

‘David always enjoys watching himself back in the videos when we get home, and they help to jog his memory.’ 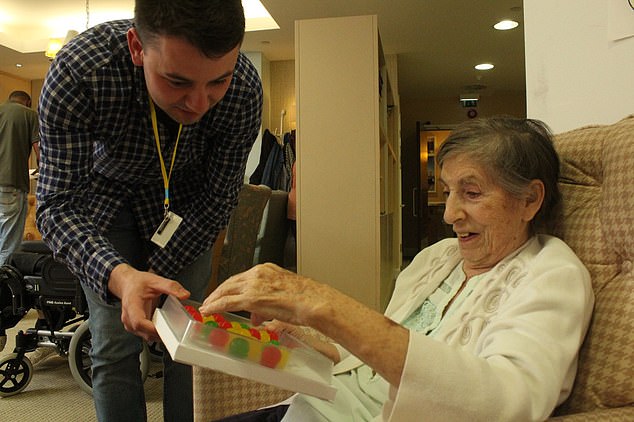 Lewis Horby (pictured), began developing Jelly Drops while studying a masters. The 24-year-old said the idea struck him when he noticed residents in his grandmother’s care home were more likely to take a sweet than they were a glass of water 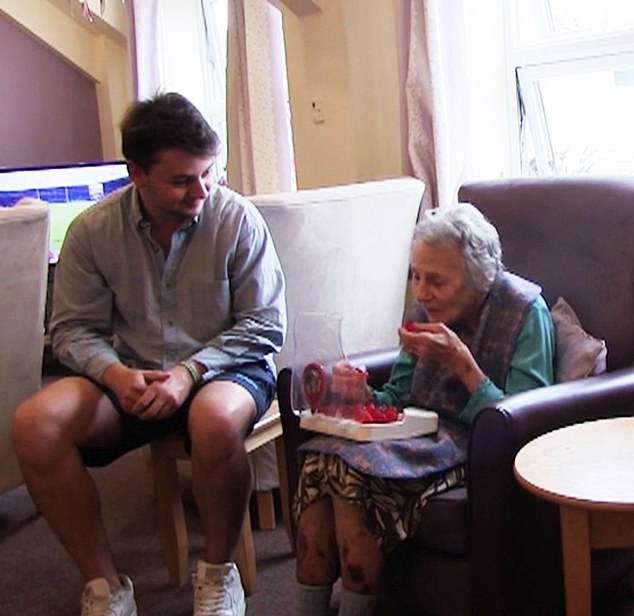 Mr Hornby said he will be using the funding to establish and validate the exact amount of liquid in each Juice Drop. Pictured, being tried by his grandmother

People with dementia may become dehydrated if they forget to drink, are unable to communicate or unable to recognise the feeling of thirst.

The sweets were developed by Lewis Hornby, who became aware of the problem when his own dementia-stricken grandmother was hospitalised because she forgot to drink enough fluids.

The 24-year-old, who began developing the sweets while at university, said he noticed residents in his grandmother’s care-home were more likely to take a sweet than they were a glass of water.

He is now using the money to discover the exact measure of fluid each sweet could possibly provide, but hopes one will provide up to 30ml.

An Alzheimer’s Society spokesperson said: ‘The panel felt that both of these proposals would have the biggest impact on people’s day to day lives.

‘It was felt these products would be highly desirable to people with dementia and their families, as well as being very scalable to be rolled out to large numbers of people at a low cost.’

The funding announcement came as part of Dementia Action Week (DAW), at the charity’s annual conference.

Jeremy Hughes, chief executive of Alzheimer’s Society, said: ‘Technology and innovation has the power to transform lives, and we want to harness this power for the 850,000 people living with dementia across the UK.

‘While we work tirelessly to find a cure for this devastating disease, technologies like How do I? and Jelly Drops can help improve care and lives for everyone living with dementia today.’

‘Whether you work in an office, a lab, are living with dementia, or are a full time carer, unite with us by submitting your ideas for a product to help people living with the condition.’

Lewis Hornby, 24, of East London, is the brains behind Jelly Drops, treats which hydrate the elderly.

His own grandmother, Pat, who has dementia, was hospitalised with dehydration in 2017.

Dementia is the leading cause of death in the UK, and the symptoms are made worse by dehydration. It’s a problem because people with dementia often forget to drink.

Mr Hornby said: ‘My grandma has had dementia for six years and went downhill very quickly while I was at university.

‘It turned out she was severely dehydrated. She went to hospital and after being treated with IV fluids she was back to her normal self within 24 hours.

Mr Hornby started to investigate solutions to dehydration in the elderly as part of a final project while he was studying a masters in Innovation, Design and Engineering at Royal College of Arts and Imperial College London.

He spoke with dementia psychologists to understand how the disease affects the ability to eat and drink.

He spend a month living in his grandmother’s care-home to get an idea of what daily life was like for both the residents and carers.

It was then that he discovered that people with dementia are highly likely to take a sweet when offered it to them – much more than a glass of water.

Mr Hornby said: ‘It’s more intuitive to pick up food than it is to keep drinking throughout the day. It’s quite dexterous to pick up the cup and sip from it.

‘The most consistent response I had from residents was to chocolate or sweets. When I offered people sweets they engaged in conversation more.

‘When I first offered my grandmother a Jelly Drop she ate seven, which is the equivalent to about a glass of water.’

Mr Hornby first had his prototype in June 2018 after starting work in the February. By October, he had a team working full time to bring the product up to scratch.

The sweet’s ingredients and structure are still being developed to maximise the hydration, and are in clinical trials to validate a emperical measure.

At the moment, Mr Hornby hopes that one Jelly Drop would equate to 20-30ml of water, coming in flavours of strawberry, lime, orange and lemon.