Democratic presidential hopeful Tim Ryan has been criticized for not putting his hand over his heart during the national anthem.

The Ohio senator was seen standing alongside his fellow 2020 contenders without his hand on his chest before the CNN debate in Detroit, Michigan.

All his Democrat rivals placed their hands over their heart as they sang The Star-Spangled Banner before the second round of presidential primaries last night.

This was quickly spotted by commentators who criticized Ryan for not following the example of his nine fellow presidential contenders as he held his hands in front of his body.

Meghan McCain tweeted: ‘Put your hand over your heart for the star spangled banner Tim Ryan!!!’ 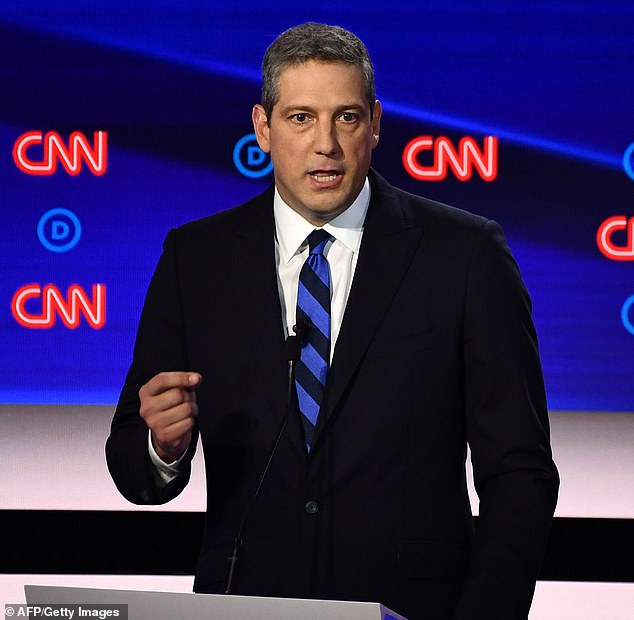 Tim Ryan was seen not covering his heart during the national anthem prior to the debate at the Fox Theatre in Detroit, Michigan

But before the candidates opening statements could begin Ryan was being slammed by Republican commentators.

However, some suggested it could merely have been a simple mistake by Ryan.

Also in the audience were three young black men who knelt during the national anthem at football games to protest police brutality.

O’Rourke had invited them to the debate as his guests. He has spoken out in defense of NFL players who kneel during the national anthem, including ex-player Colin Kaepernick who began the protest. 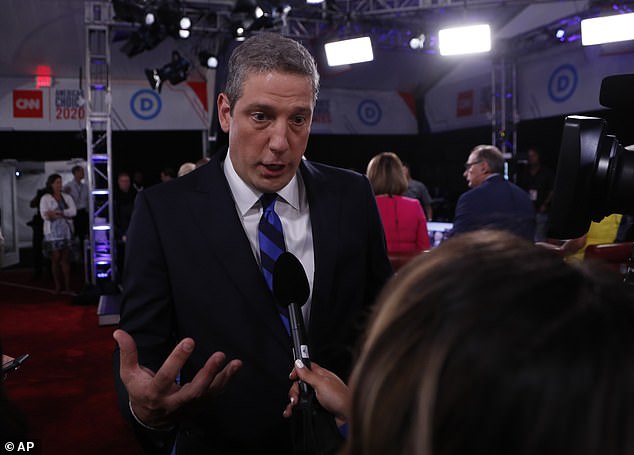 During the debate Ryan mocked his more liberal rivals who called for decriminalizing illegal border crossings.

‘If you want to come into the country, you should at least ring the doorbell.’

‘We have asylum laws. It’s shameful what is happening but Donald Trump is doing it and even if you decriminalize, which you should not do, you still have statutory authority and the president could use his authority to separate families.’

Considered a moderate candidate for the Oval Office, Ryan insisted during the discussions that illegal immigration must continue to be banned by law.

He formed an unofficial moderate alliance with John Delaney of Maryland to tell hardline candidates such as Warren and Sanders that they risk handing the 2020 election to Trump.

During his campaign he has sought to appeal to blue-collar voters in the Midwest, or ‘people who take a shower after work’, as he described them. 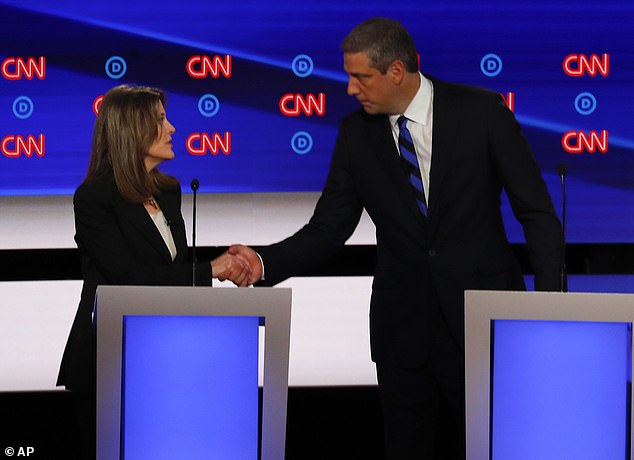 Democrats in the Midwest have lost some of their base in the labor movement to Trump, which Ryan, from Youngstown, Ohio, is hoping to claw back.

In 2016 Ryan challenged House Speaker Nancy Pelosi for the role of minority leader but struggled to gain traction.

Last night Sanders also exploded at Ryan when he disagreed with his contention that ‘Medicare for All’ plans circulating Capitol Hill are broad enough to cover every American and those who are in the country illegally.

Sanders said: ‘Medicare for All is comprehensive, it covers all health care needs for senior citizens. It will finally include dental care, hearing AIDS and eyeglasses.

‘You don’t know that,’ Ryan interjected.

‘I do know!’ Sanders shot back. ‘I wrote the damned bill!’