Women from the Democratic party put on a unified front by wearing all white for President Trump’s State of the Union Address on Tuesday.

The political tribute was initiated by Florida Representative Lois Frankel, chairwoman of the Democratic Women’s Working Group, in an effort to honor those who voted in the midterm elections.

‘By wearing suffragette white to #SOTU2019 tmrw we’re sending a message to everyone that voted for @HouseDemocrats & delivered us the majority that we’re working #ForThePeople, promoting the economic security of women & their families!’ Frankel said in a Monday tweet.

All in this together: Women from the Democratic party wore all white to the State of the Union on Tuesday in an effort to support women’s right 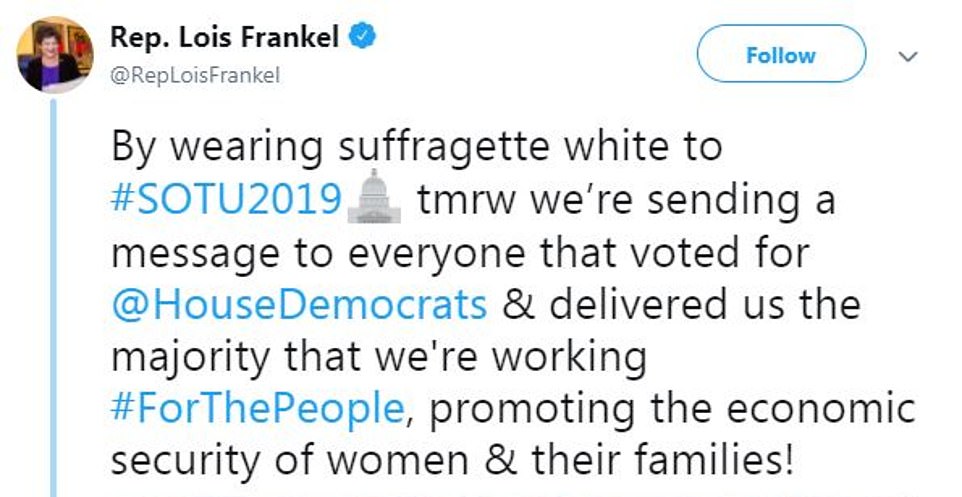 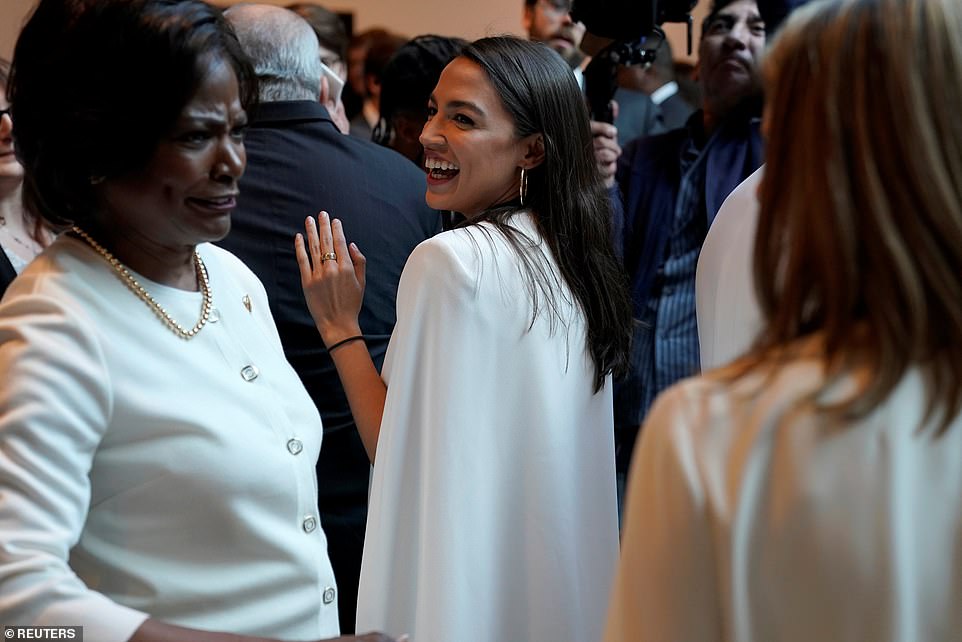 Super girl! Rep. Alexandria Ocasio-Cortez rocked a white cape as she posed for photos with various women before the presidential address 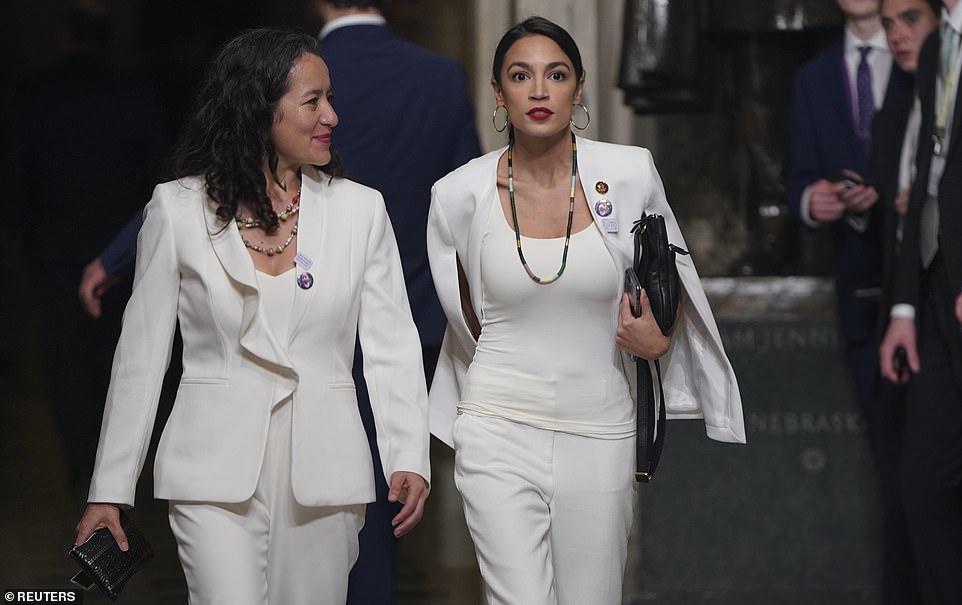 Ocasio-Cortez arrives to the U.S. capitol building with guest Ana Maria Archilla, the woman who confronted Jeff Flake during the Kavanaugh hearing

Rep. Alexandria Ocasio-Cortez rocked a white cape as she posed for photos with various women before the presidential address at the U.S. Capitol. The cape went for $100 on Zara before it was marked down and eventually sold out online.

The politician had tweeted that people shouldn’t watch the president’s address, but clarified that she was only giving people warning about Trump’s tendency to use harmful words impacting marginalized communities.

‘I’m going in there to definitely listen to what the president has to say but I do represent many vulnerable communities,’ she said to CNN. ‘Many of whom have been traumatized and feel very vulnerable to the president’s actions and the president’s words from air traffic controllers whose paychecks were being with held for a month to immigrant who is aren’t sure if their Visas will be renewed or if their applications will be approved. I think if it’s going to be harmful for you, I wanted to give that permission to folks if they were feeling some type of way about it.’

Ocasio-Cortez brought Ana Maria Archilla, the woman who confronted Jeff Flake during the Kavanaugh hearing, along as a guest for the president’s remarks. 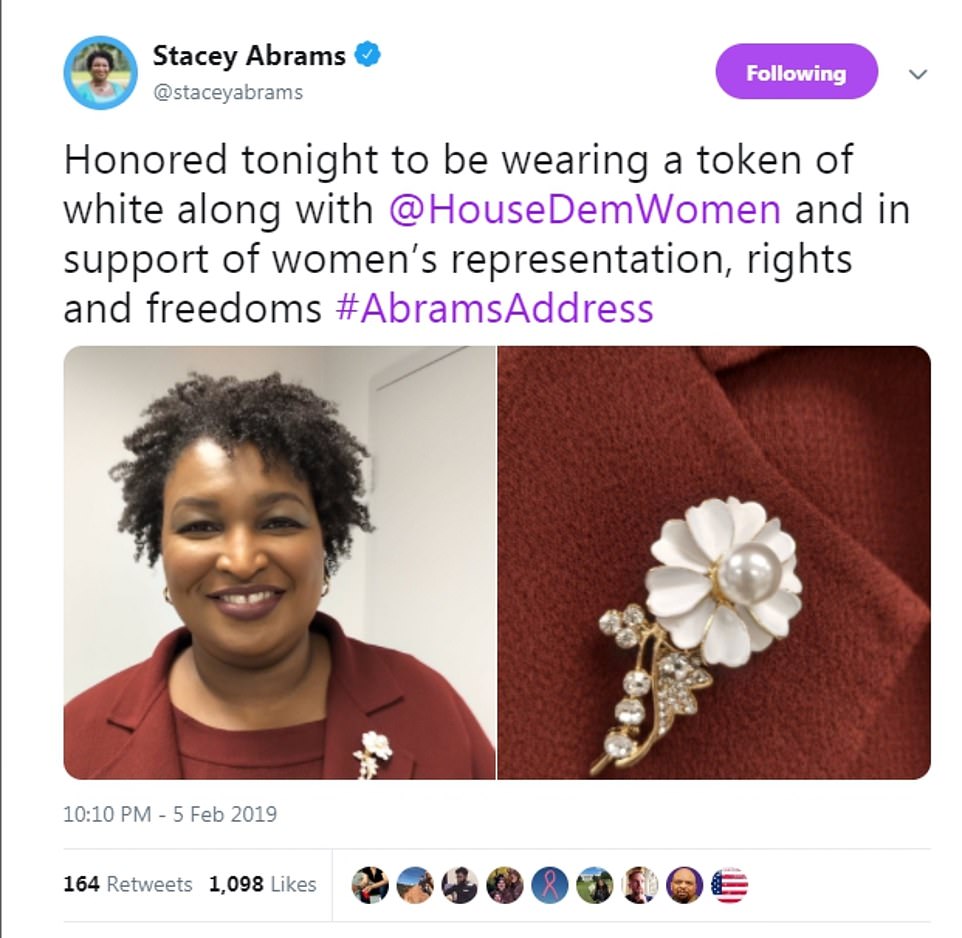 Stacey Abrams shared a tweet offering her support of the Democratic women wearing right. She even wore a pin of a golden and white flower to accompany her look 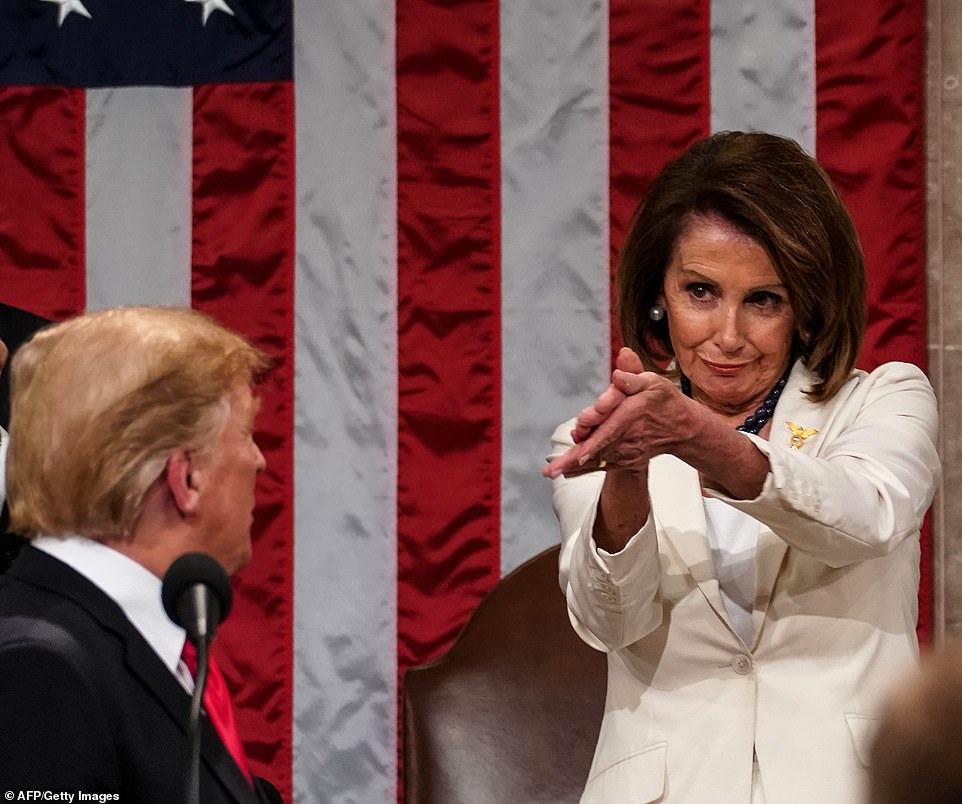 From opposite sides: Speaker Pelosi showed brightly in her white suit in contrast to Donald Trump’s black suit 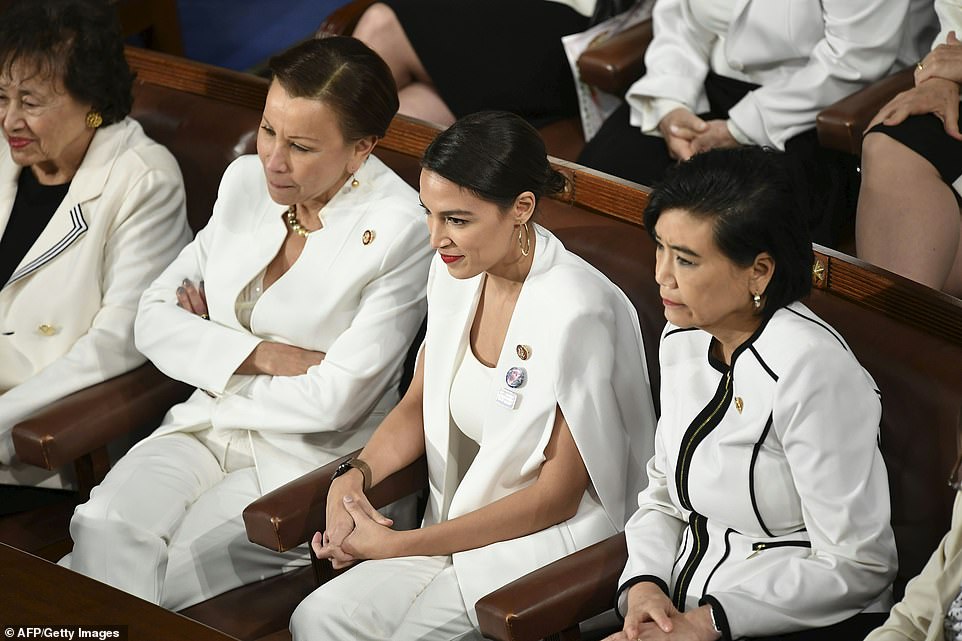 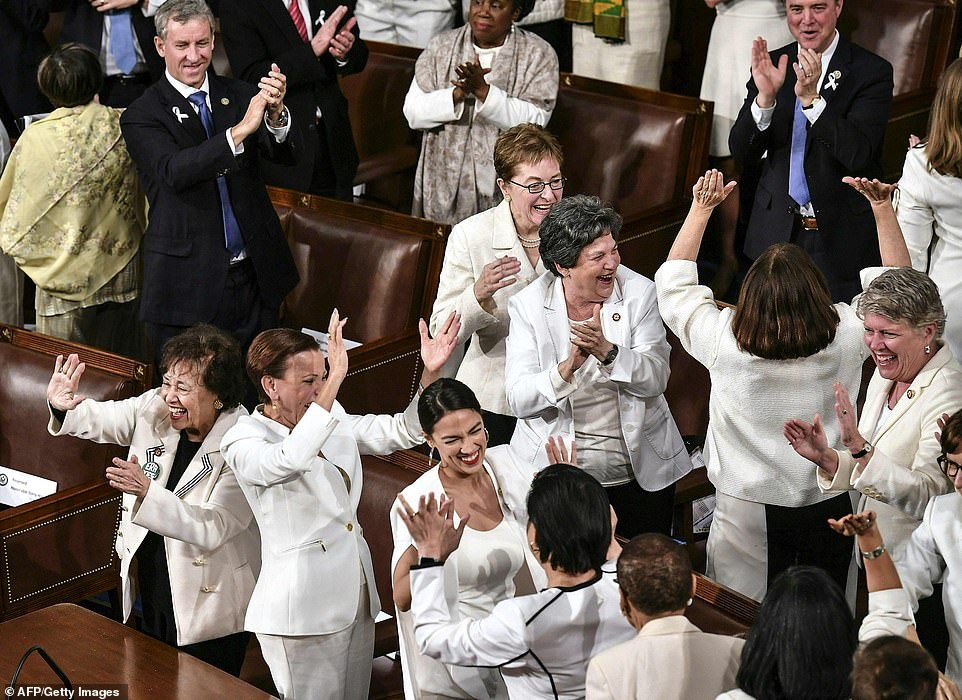 ‘I’m here as an invitation to everyone around the country to use their voices and tell their stories because our Democracy can not exist and can not work if we are not all in it,’ Archilla said to CNN. ‘Shaping it, making our demands, amking sure that the people representing us, understand our lives and our priorities. I feel so lucky that I have the best representative in congress, Alexandria Ocasio-Cortez.

When asked about being in the room with Kavanaugh, Archilla noted that that she just realized she’ll see him for the first time since he was confirmed.

She added: ‘It is still very painful for me and many women across the country to know that our elected officials failed to understand theopportunity that they had to signal to the country that they were not going to reaffirm a culture that enables sexual violence in the first place. They failed by putting Kavanaugh in the supreme court. I fell encouraged by the leadership of women like my congresswoman and the women that are presenting a new vision for the country.’ 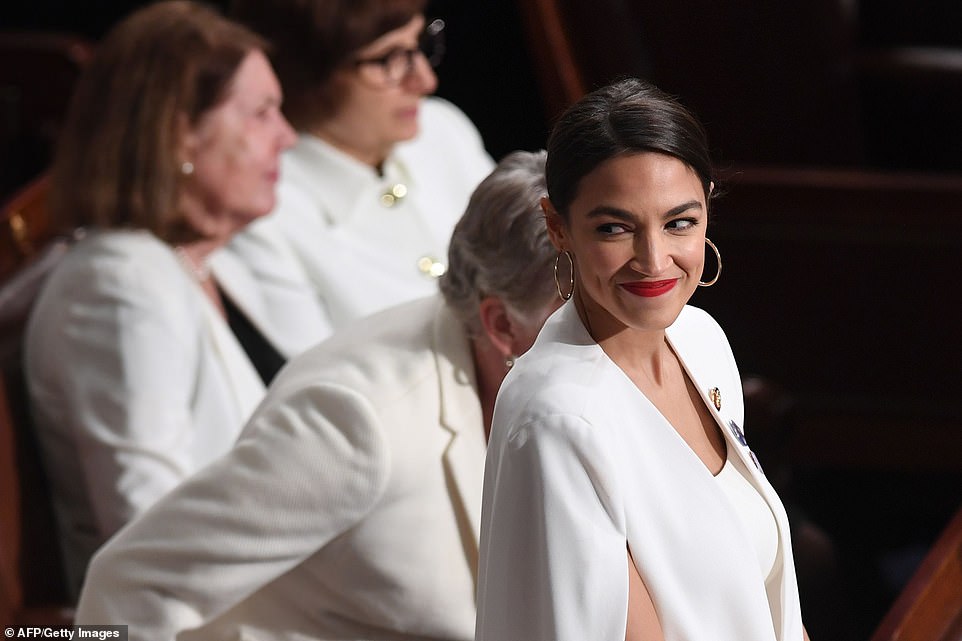 The politician had tweeted that people shouldn’t watch the president’s address, but clarified that she was only giving people warning about Trump’s tendency to use harmful words impacting marginalized communities

Speaker Nancy Pelosi wore a white suit paired with a lavender blouse. The lavender was also a homage to the colors used in the Suffragist movement in the 20th century. She accessorized with a golden brooch that also was a salute to the suffragist colors.

But a few men also wore white in solidarity with the women. Rep. Dean Phillips of Minnesota also sported a white suit finished with black detail. He accessorized with a navy tie and a pin that said ‘Era Yes,’ a national organization for women that pushes for sex equality.

‘Honored tonight to be wearing a token of white along with @HouseDemWomen and in support of women’s representation, rights and freedoms #AbramsAddress,’ said Stacey Abrams on Twitter. 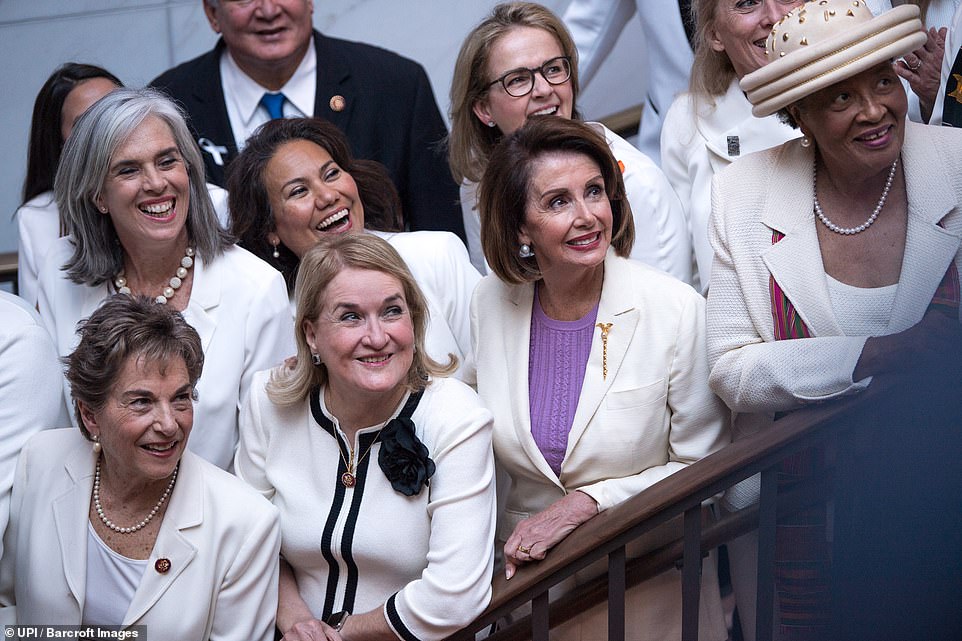 So classy! Nancy wore an elegant white suit and paired it effortlessly with a lavender blouse and a golden brooch 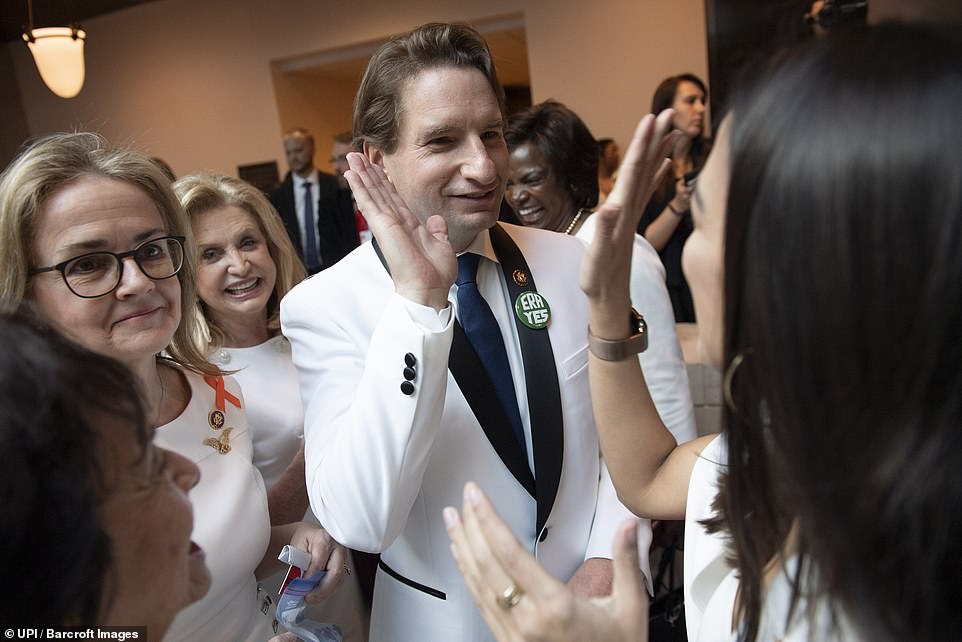 Support: Rep. Dean Phillips of Minnesota dressed in solidarity with the women and accessorized with a pin that said ‘Era Yes,’ a national organization for women that pushes for sex equality

The all-white action isn’t the first that the Democratic party has participated in under the presidency of Donald Trump.

Women from the party wore white to Trump’s first speech before a joint session of Congress in 2017.

Last year, Frankel encouraged members of Congress to wear black to Trump’s first SOTU to show their support with the #MeToo movement. 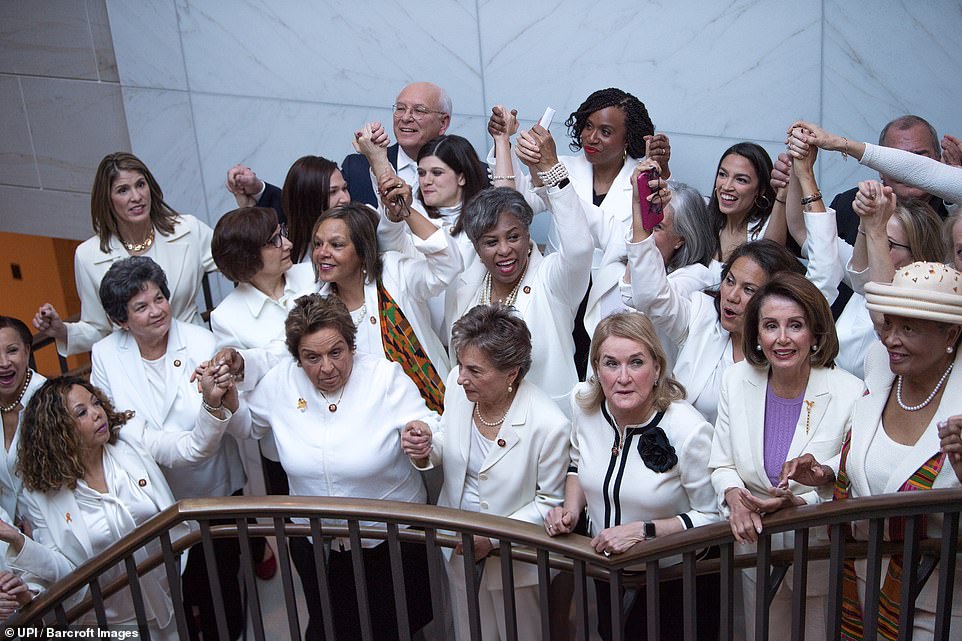 Unified: The all-white action isn’t the first that the Democratic party has participated in under the presidency of Donald Trump 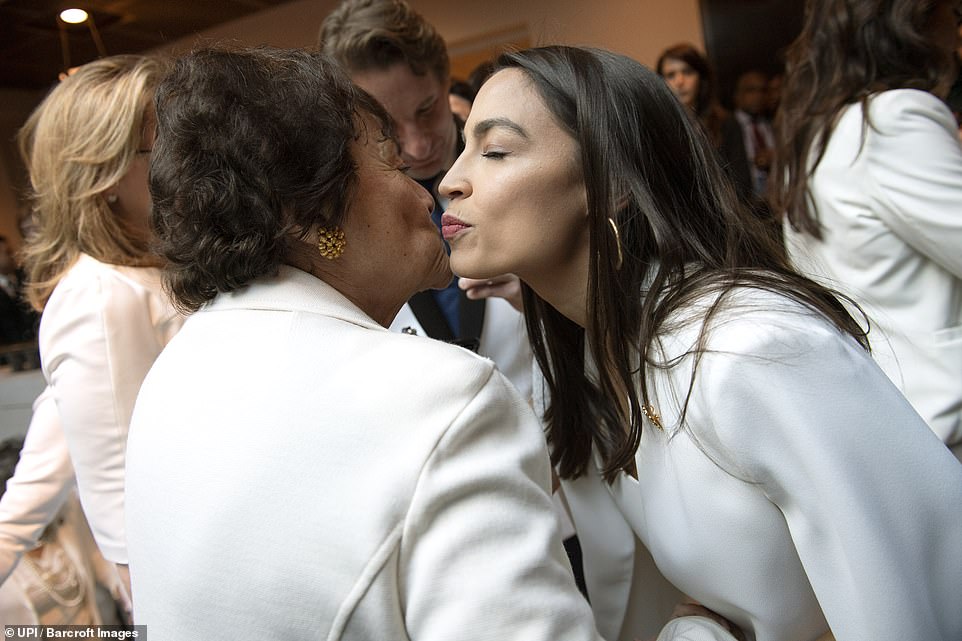 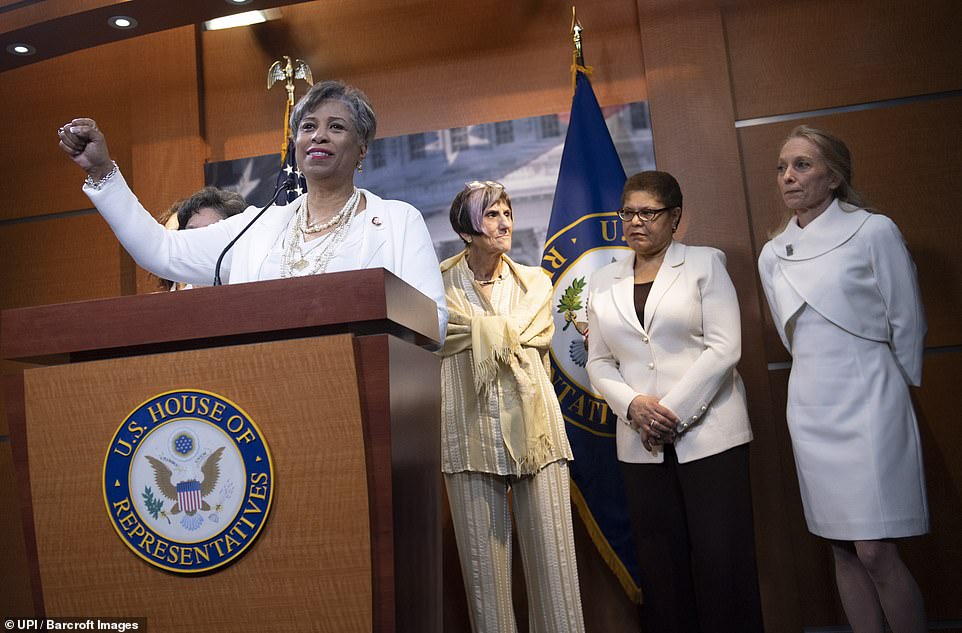 Rep. Brenda Lawrence (at the podium) of Wisconsin speaks at a women’s right press conference before the State of the Union. Rosa DeLauro was also in attendance with her signature colored hair (center)

‘By wearing black, members of Congress are showing solidarity with a movement that is demanding economic justice and a cultural shift that enables men and women to work side by side in safety and dignity, free of sexual harassment, and be paid equally for the value of their work,’ she said in a statement at the time, according to USA Today.

Suffragist chose purple and white when deciding the colors of their flag, Washington Post reports. The purple represents loyalty and stood in solidarity with those working for women’s rights in England, White represented purity and gold represented Kansas, where Susan B. Anthony and Elizabeth Cady Stanton worked to secure the right to vote for women. 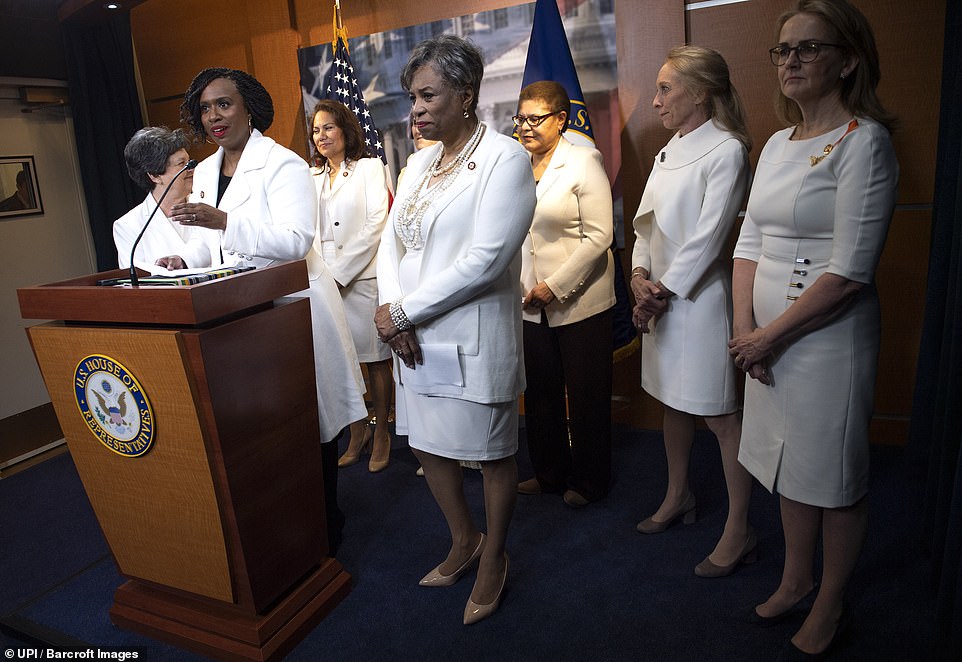 Lawrence was joined by Pressley (left) at the press conference 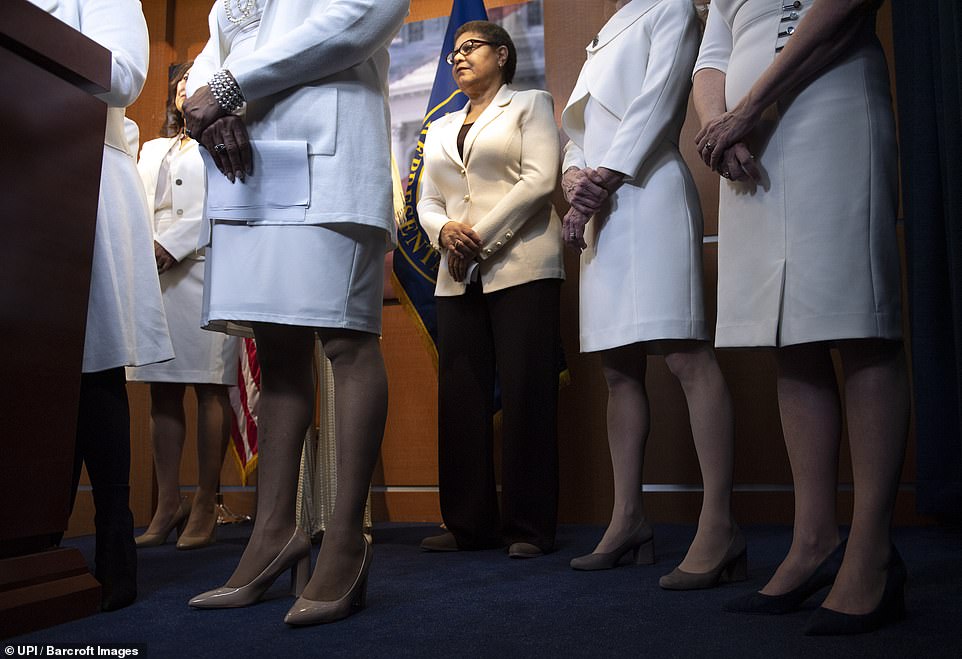 White clothing also allowed the women in the suffrage movement to come off as nonthreatening, downplaying any connection between women and aggression. The clothing also promoted the inclusion of those in the working class.

In 1913, lawyer Inez Milholland Boissevain wore a white cape as she rode a white horse in a suffrage parade in Washington D.C. 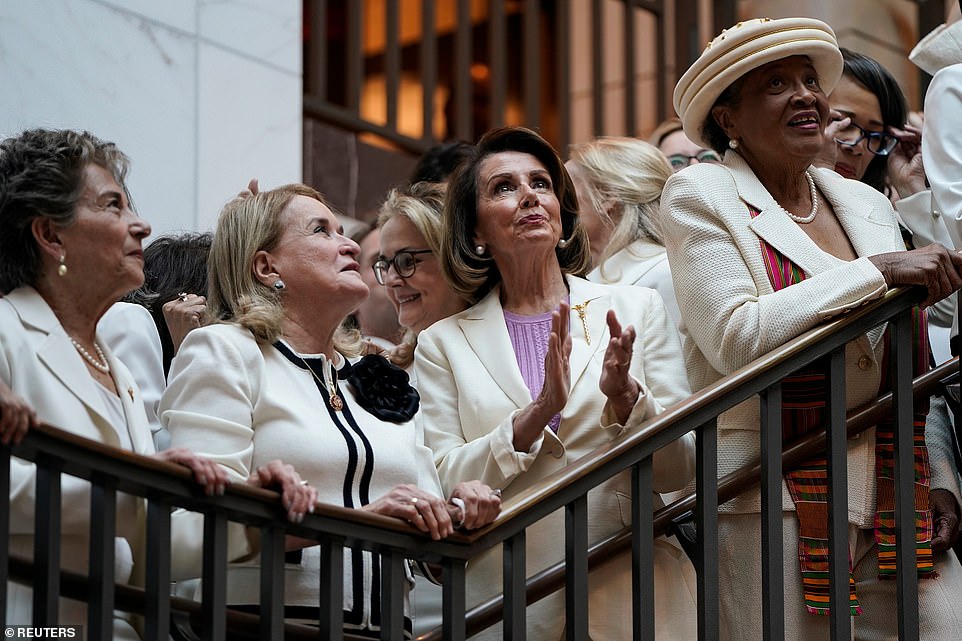 Pelosi whole ensemble paid homage to the suffragist movement. She stands with the other women on the spiral staircase 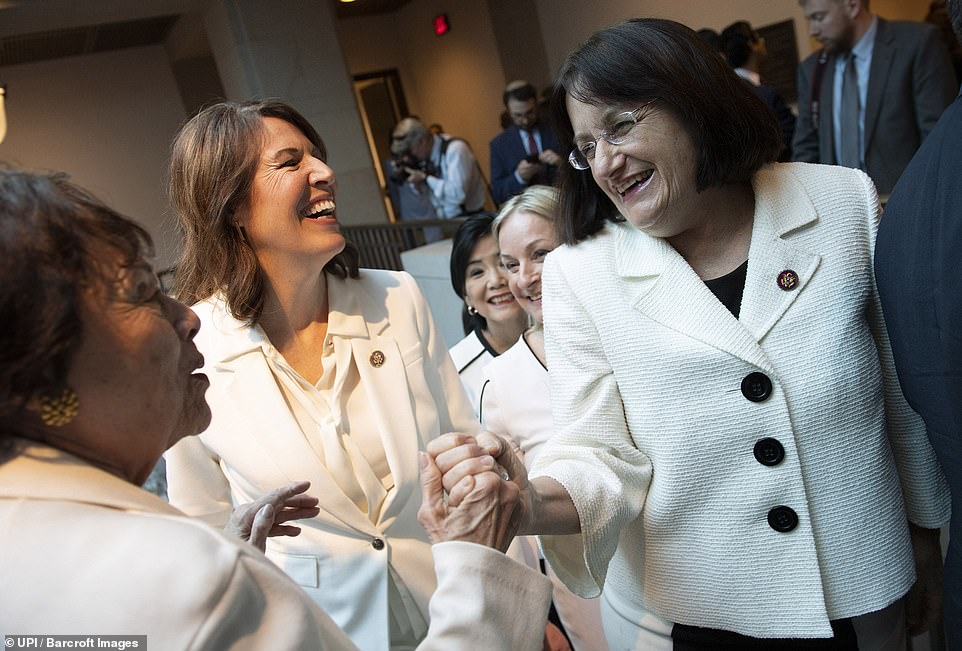 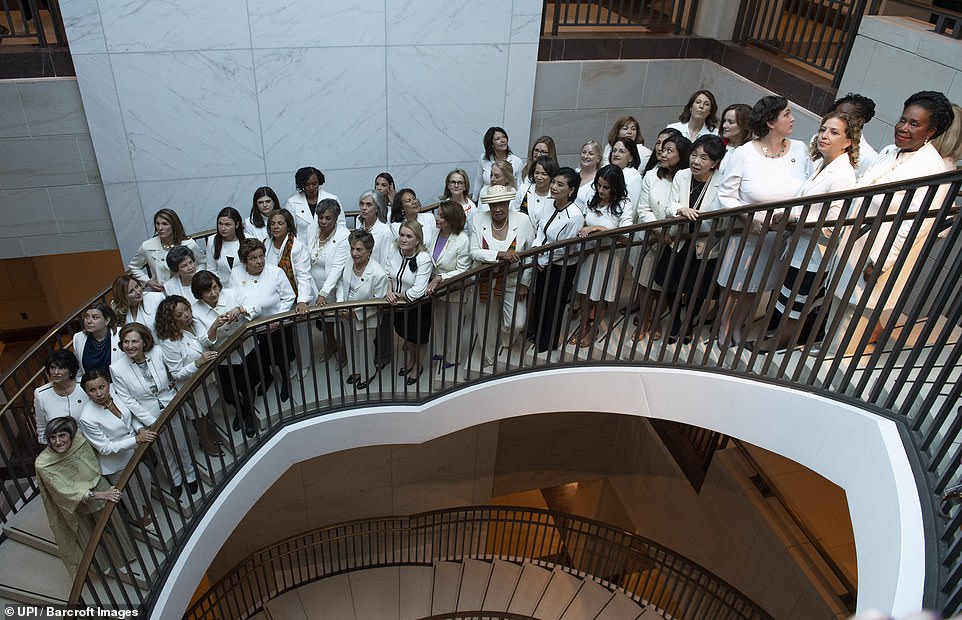 The women gather on the steps at the U.S. Capitol to take their photos