If President Donald Trump is forced to pick an alternate Supreme Court nominee to Brett Kavanaugh, his top choice may be a female judge who has close ties to a conservative Christian group that helped inspire The Handmaid’s Tale.

Amy Coney Barrett, 46, was considered a leading backup as Kavanaugh’s nomination hung in the balance on Thursday, with a third accuser coming forward to allege sexual misconduct in his youth.

Activist groups have already registered ‘StopConeyBarrett.com’ in a bid to fight her potential nomination.

Barrett, a U.S. Circuit Court of Appeals judge on the Seventh Circuit was added to Trump’s shortlist of potential nominees last year, and was said to be among his top three picks before he settled on Kavanaugh.

After Trump announced Kavanaugh as his choice in July, Republican Senator Orrin Hatch of Utah commented that he assumed Barrett would be selected ‘next time’.

The fact that Barrett is a woman would provide a bulwark against allegations in the age of #MeToo – but Democrats would be just as unhappy with her nomination, with many seeing her as more conservative than Kavanaugh and possibly more likely to overturn Roe v Wade.

Liberal activists registered ‘StopConeyBarrett.com’ in June but it remains ready to be activated in a campaign against Barrett if she is nominated. 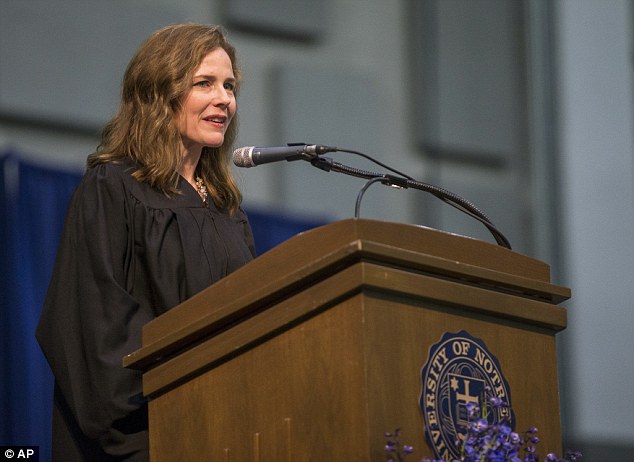 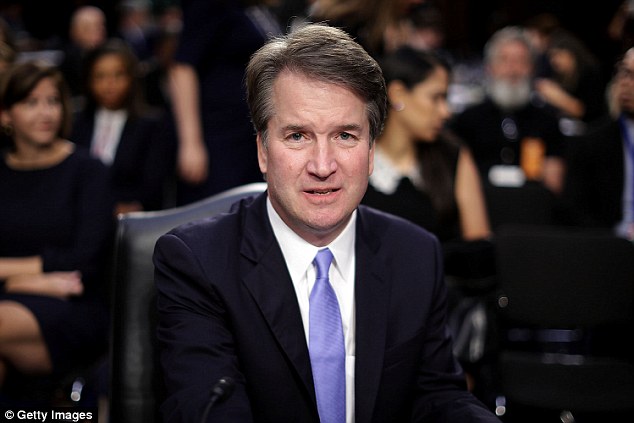 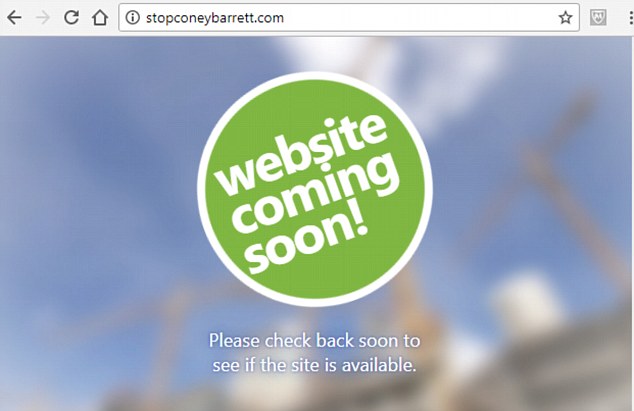 Activist groups have already registered ‘StopConeyBarrett.com’ in a bid to fight her potential nomination. The site was registered in June but remains dormant and ready to be activated

A practicing Catholic, Barrett has deep ties to People of Praise, a non-denominational Christian covenant group founded as part of a Catholic revitalization movement in 1971.

The group’s conservative tenets and practice of referring to female leaders as ‘handmaids’ helped inspire The Handmaid’s Tale, a book about a religious takeover of the U.S. government which is now a hit TV show, according to a 1986 interview with author Margaret Atwood.

The hit TV series has even inspired a familiar rallying cry against the Trump administration in the form protesters dressed in the red robes of the ‘handmaids’ as a commentary that the US is headed toward totalitarian rule.

The ‘handmaid’ protesters have also been spotted protesting at Kavanaugh’s confirmation hearings.

Barrett’s religious beliefs came under fire during her confirmation to the Seventh Circuit, with Senate Judiciary Committee minority leader Dianne Feinstein grilling her on her Catholic faith.

‘The dogma lives loudly within you, and that is a concern,’ Feinstein said while questioning Barrett on her view of Roe, the 1973 Supreme Court decision that legalized abortion nationwide. 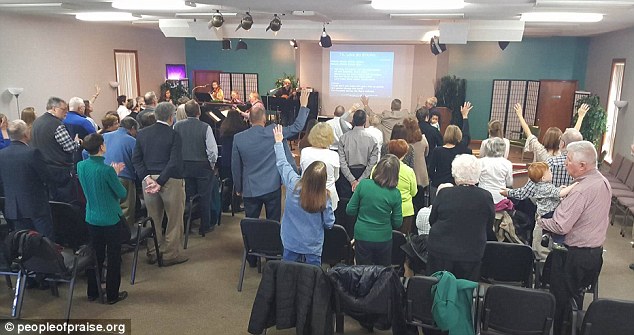 A People of Praise gathering is seen. Barrett has close ties to the non-denominational group 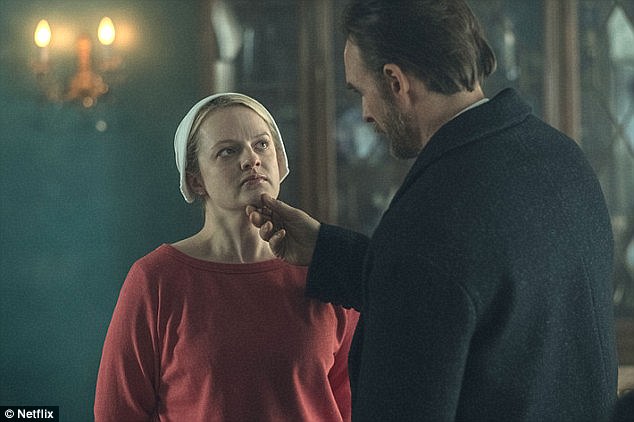 Author Margaret Atwood has said that People of Praise helped inspire The Handmaid’s Tale, a popular book that became the hit TV show (above) of the same name 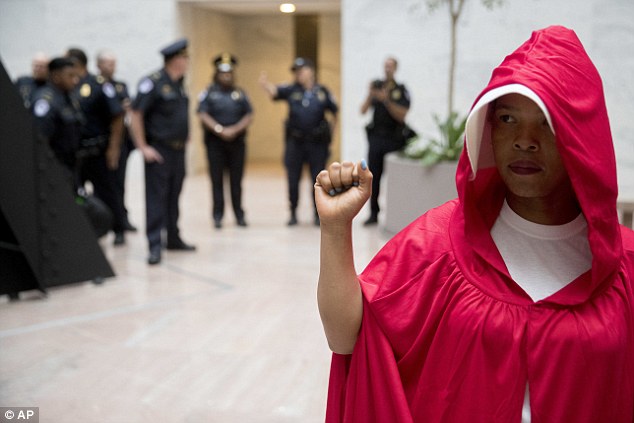 A protester wears a costume from the show The Handmaid’s Tale in the Capitol on Monday while protesting Kavanaugh’s nomination. The red robes have become an iconic protest

Barrett has previously written that  ‘judges cannot — nor should they try to — align our legal system with the Church’s moral teaching whenever the two diverge.’

She also said in 2013: ‘I think it is very unlikely at this point that the court is going to overturn Roe.’

‘The fundamental element, that the woman has a right to choose abortion, will probably stand,’ she on a panel discussion at Notre Dame reported by student newspaper the Observer. ‘The controversy right now is about funding. It’s a question of whether abortions will be publicly or privately funded.’

Barrett attended law school at Notre Dame and undergrad at Rhodes College, meaning that if she were appointed and confirmed to the Supreme Court, she would be the only sitting justice who did not attend an Ivy League school.

Despite the contentious nature of Barrett’s circuit confirmation hearings, senators did not ask her about her reported membership in People of Praise.

Barrett refused to comment on a New York Times report that claimed she was a member of the group, and has not publicly confirmed her membership since. 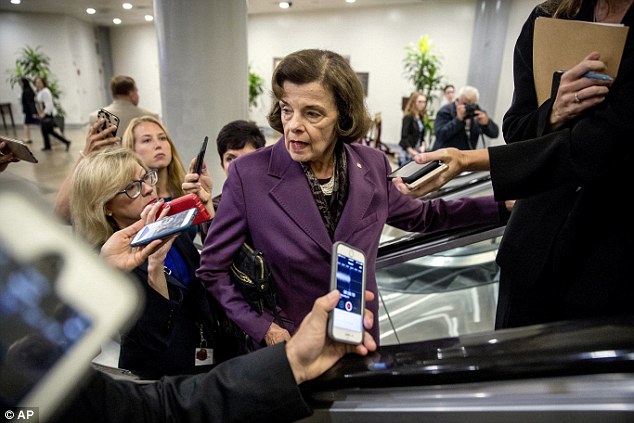 But she and her husband Jesse Barrett, 44, both have deep family ties in the group.

Coney’s mother, Linda Coney, 70, served as a ‘handmaid’ in New Orleans and her father Mike Coney, 72, is a member of the Board of Governors until his term expires in August.

Mike Coney was also the official branch coordinator for the group’s New Orleans chapter. He is also a deacon in the Catholic church, the nearest clerical rank a married man can have to a priest.

On the block where they live there are four other families who belonged to People of Praise, according to a 2005 article in the group’s newsletter.

People of Praise, which describes itself as a ‘charismatic, ecumenical covenant community,’ encourages speaking in tongues, prophesy, and healing by the joint laying on of hands.

The organization appoints a ‘personal adviser’ for each member to help guide the member’s decisions on marriage, career and other life choices.

Members are also encouraged to confess personal sins, financial information and other sensitive disclosures to these advisors – who were until recently known as ‘heads’ for males and ‘handmaids’ for females.

Advisors are allowed to report these admissions to group leadership if necessary, according to an account of one former member. 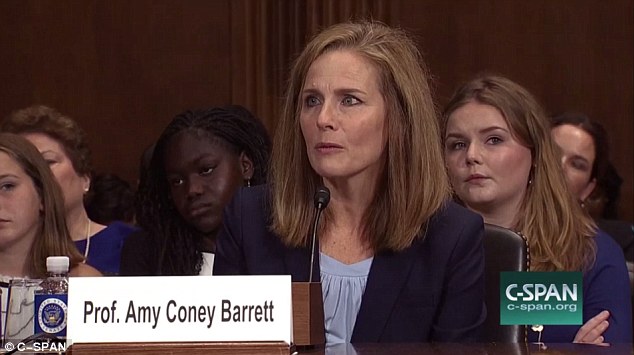 Barrett (above in a confirmation hearing) has never confirmed her membership in People of Praise, but has strong ties to the group

Husbands are also considered authorities over their wives, according to the group’s beliefs.

The organization itself says that the term ‘handmaid’ was a reference to Jesus’s mother Mary’s description of herself as a ‘handmaid of the Lord.’ They said they recently stopped using the term due to cultural shifts and now use the name ‘women leaders.’

Barrett is the mother of seven, including five biological children and two children adopted from Haiti.

She is the youngest justice on Trump’s Supreme Court shortlist, and once clerked for late Justice Antonin Scalia.

On Wednesday, Trump showed no sign of withdrawing Kavanaugh’s nomination, despite new and graphic allegations that the judge ‘lined up’ to ‘take his turn’ with drunken girls when he was in high school. 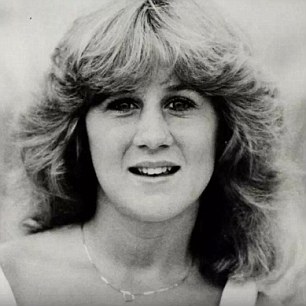 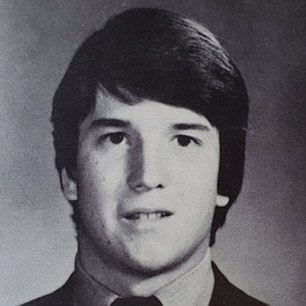 Ford says an inebriated Kavanaugh pinned her on a bed, muffled her cries and tried removing her clothes when they were teens in the 80s. They are seen above in high school

Kavanaugh strongly denied the allegation as ‘ridiculous and from the Twilight Zone’. It is the third claim of youthful misconduct to emerge late in his confirmation proceedings.

‘Avenatti is a third rate lawyer who is good at making false accusations, like he did on me and like he is now doing on Judge Brett Kavanaugh,’ Trump wrote.

‘He is just looking for attention and doesn’t want people to look at his past record and relationships – a total low-life!’