Democrats are holding the lead heading into November’s midterm election, a new NBC News/Wall Street Journal poll found, with a majority of respondents saying they want to see a change in the direction of the country.

Democrats have a 12-point lead on the congressional ballot, the poll revealed with 52 percent saying they want Democrats to control Congress and 40 percent wanting Republicans in charge.

That’s a four-point boost from August, when the poll found Democrats had an eight point lead.

However, the poll found almost 60 percent – including one-third of GOP voters – want a change in the country than the way it’s been going under President Donald Trump. 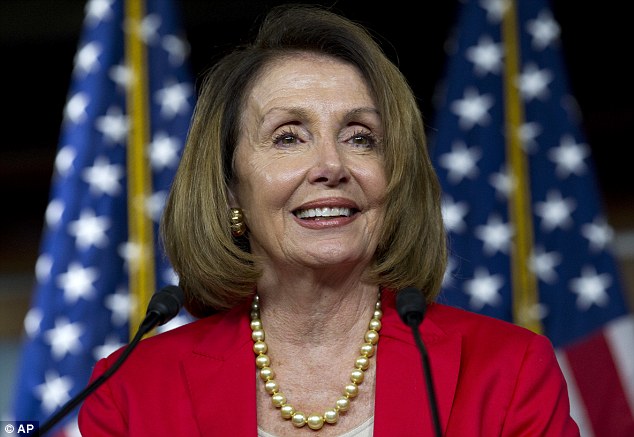 Democrats have a 12-point lead on the congressional ballot and, if they retake the House of Representatives, they could put Nancy Pelosi back in the speaker’s office

That could be the most alarming sign for the president, who has expressed confidence Republican will keep control of Congress.

In past ‘wave’ elections, the call for change has been a harbinger of a change in power.

‘Americans are hitting the brake in a midterm, and trying to send the signal that they’re not satisfied,’ Republican pollster Bill McInturff, who conducted the survey with Democratic pollsters at Hart Research Associates, told NBC News.

He also pointed to some warning signs for Republicans: Democrats lead among moderates and independents by more than 30 points; Republicans are losing women ages 50 and older by nearly 20 points; and the GOP is behind among voters living in competitive congressional districts by 12 points.

More and more independent political prognosticators are predicting Democrats could retake control of the House of Representatives, which could result in Nancy Pelosi returning to the speaker’s office.

And some Senate Republicans have been sounding alarm bells about that chamber, with Senate Majority Leader Mitch McConnell warning earlier this month that the November midterm election will be ‘very challenging’ for the GOP.

GOP voters are, however, closing the enthusiasm gap: 61 percent of Republican voters are expressing a high interest in the election, which nearly matches the 65 percent of Democrats who say the same.

For the first time, the poll measured those likely to vote, where Democrats had an eight point advantage.

The electoral landscape remains ‘very precarious’ for the GOP, McInturff told CNBC: ‘The ways in which you can create a Congressional Republican majority are hard to see.’

The NBC News/Wall Street Journal poll was conducted Sept. 16-19 and included 900 registered voters. The margin of error is plus or minus 3.27 percent.