Denise Van Outen on how she moved on, after she discovered her fiancé was cheating on her

Denise Van Outen spent last Christmas Day heartbroken and a lone, dressed in a Christmas pudding onesie. She’d just discovered her partner of seven years, Eddie Boxshall, had been cheating on her, and decided to announce their split on Instagram.

It was a traumatic time as she told her fiancé to leave their home – the home she’d bought for them – then had to grieve the person she’d loved and she and her now 12-year-old daughter Betsy had lost.

‘I was put in a situation I wasn’t expecting and it wasn’t any of my doing,’ she says now.

‘It was totally out of the blue. I was back to being a single mum again, so it really was a juggling act.’

Denise Van Outen (pictured) discovered that her partner of seven years had been cheating. The actor, 48, announced their split on Instagram and spent Christmas alone

Eddie, a commodities trader, was her first boyfriend since she split with her ex-husband Lee Mead, the actor father of Betsy, in 2013 and they had planned to get married this year. It was particularly painful for Denise to uncover, bit by bit, a web of sexually charged chats and text messages with other women who he’d met online.

But with her mischievous sense of humour and dazzling smile, Denise, 48, has papered over more than her fair share of crippling self-doubt cracks and betrayals in her lifetime. So she threw herself into her work, although there were many times she stood on stage ready to burst into tears and sat in her dressing room trying to figure out her future.

‘But Dr Theatre, as they say, always takes over,’ she smiles. ‘At the end of the day, the show must go on.’

Now, almost a year on, Denise not only has her sparkle back, but she’s also learnt to love again. ‘I don’t need to put on a brave face any more because I have a happy face now,’ she says.

‘I found myself in a situation I just wasn’t expecting, but my family rallied together to help me out. In that situation you realise the importance of family.

‘We’ve all been in these situations – had our ups and downs – and you value people more when you’re down because you realise they’re there for you.

‘I feel really good now because I’m in a new relationship. You can never plan for what happened, but I thought, “Now I have the opportunity to date and be happy again,” especially at this age when you’re a bit older.’ 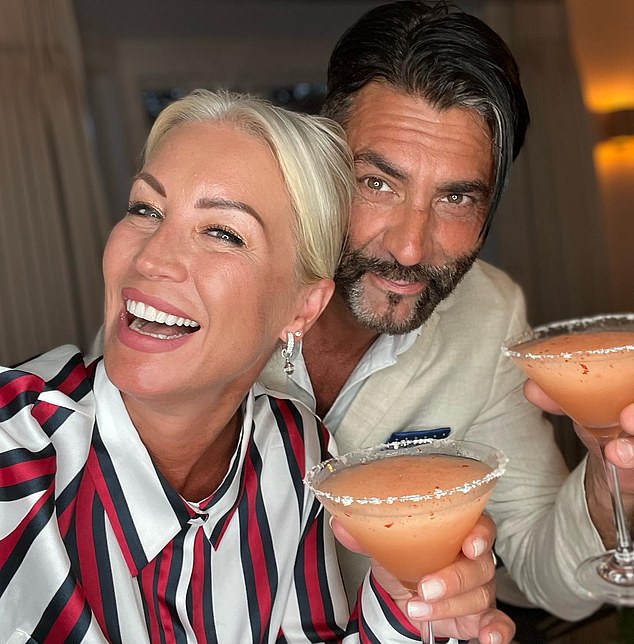 Denise’s new partner is Jimmy Barba, 55, a property developer and former Big Brother contestant in Italy, and she says they have a mutually supportive relationship. ‘He’s lovely. It’s really nice to be with someone who knows the industry but isn’t in it.

‘We know all the same people, which is mad but also good because that’s how I got to know him, through friends. ‘

He’s a decent guy and my friends have known him for 25 years so I think if there was anything they were concerned about, they would’ve told me to be careful. But the general vibe is that he’s just a really nice guy.’

Her saving grace, she says, has been knowing when to walk away from a relationship that isn’t working for her own self-respect. So too has therapy.

‘I think there’s been repetitive behaviour, especially with relationships, that I’ve now got to the bottom of through therapy,’ she reveals. ‘It’s good for that and it makes you think about things differently.

‘It wasn’t something I was planning to do but my mum suggested it. She said, “I think you should speak to somebody else,” especially in the situation I was in where emotions are attached.

‘I’ve enjoyed it, I’m still doing it and I recommend it. It’s not a weakness, it’s actually a strength.

‘I’m just in a generally better place, I’m calmer. Jimmy and I spend hours talking too, which has been a massive help because I feel I’m in a relationship with someone who’s very open.

‘I realised that to make a relationship work, you have to be with someone who’s emotionally open. We’re in a good place, but we haven’t been dating that long so let’s see what happens.’

Denise started working at the age of seven, modelling knitting patterns, before attending the Sylvia Young Theatre School in London. This led to jobs in theatre and children’s TV before she shot to fame on Channel 4’s The Big Breakfast in her early twenties. 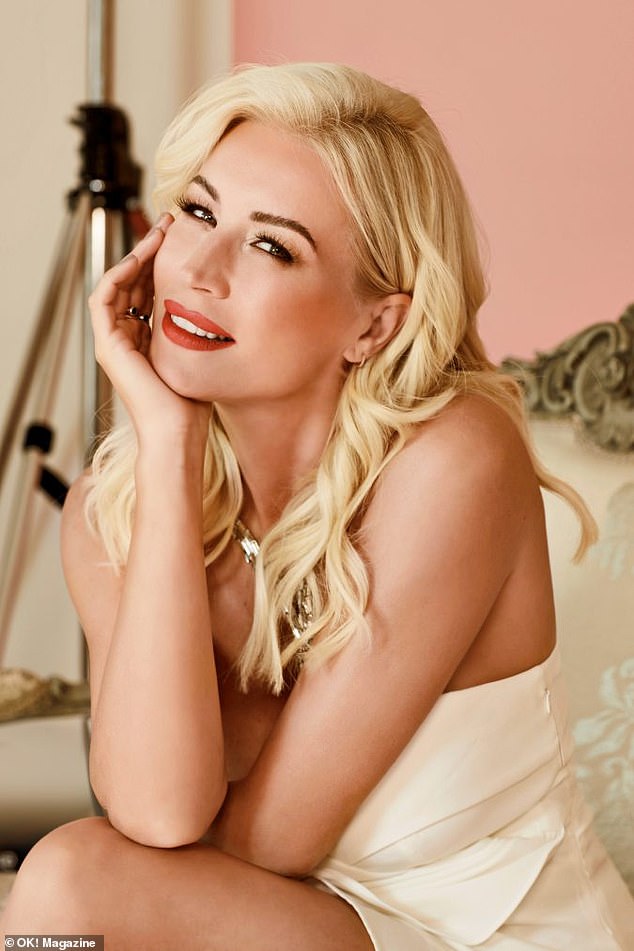 A year on, Denise has learnt to love again and is with a man that her friends have known for 25 years

Because the tape was dated, showing she was below the legal age of consent, it was never made public but the man, referred to as ‘Mike’, was questioned by police, who found he’d recorded dozens of girls.

Then her dream of becoming the archetypal rock star wife crumbled when her three-year relationship with Jamiroquai singer Jay Kay ended in 2001. Denise has put the break-up down to his addictions and her confidence being sapped, saying she’d never felt lonelier despite living in an 11-bedroom house with him, surrounded by other people.

Then there was the short-lived marriage to Lee Mead. They met when she was a judge on the talent show Any Dream Will Do in 2007, which he won, married in 2009 but split up in 2013.

Yet Denise and ex-husband Lee have managed to remain great friends. How have they achieved that?

‘I’d like to think we’re just two decent human beings. We also know that our daughter is the most important person in the break-up. 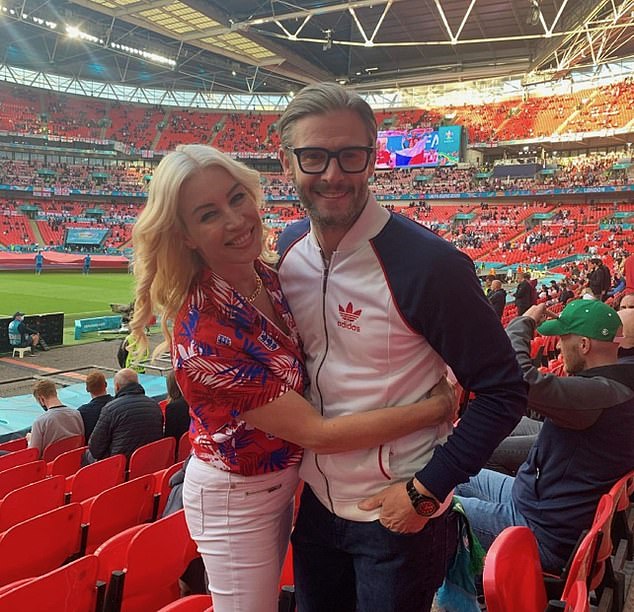 Denise was with her ex-boyfriend Eddie Boxshall (pictured) for seven years. She announced their split on Instagram

‘Lee is brilliant. We just get on. Everything’s fair and we help each other. Lee’s in a really good relationship now – she’s lovely, and Betsy loves her too.

‘Honestly, we’re lucky that we’re one of the couples that have managed to make all of that work.’

Growing up, Denise was determined to be an all-round entertainer – her idols were Shirley MacLaine and Bette Midler. So it was surprising to her when she was labelled a ladette back in the 90s.

‘I don’t know where that came from and I never really felt like I fitted that mould because I’m a girls’ girl. I don’t have a football team and I don’t drink beer.

‘I’m a white wine spritzer girl in high heels dancing around my handbag,’ she laughs.

‘I went a bit rogue when I was a teenager. Like anyone’s youth should be, mine was filled with laughs, a lot of nights out, a lot of romance and I feel it ticked every box. But it was also about girl power.

I’m an independent working woman. I provide our home and I pay all the bills. I just get on with it

‘I feel I’ve lived by that. I’m an independent working woman. I provide our home and I pay all my own bills – everything’s on my shoulders so I just get on with it.

‘And I want to be a role model for my daughter too.’

Denise has had her fair share of professional setbacks too. She fell out with her former Big Breakfast co-host Johnny Vaughan when they were teamed together on a radio show, and she left after just six months.

Previously, having presented ITV’s Record Of The Year awards programme for three years in a row, she was dropped because her latenight show Something For The Weekend was panned and she was no longer deemed ‘primetime’ material.

So when Jay Kay told her she’d make a fool of herself if she tried for the role of Roxie Hart in the West End musical Chicago, she had to find the ‘fire in my belly’ to audition. She landed the role and it turned out to be a life-changing experience.

The role took her to Broadway, where she caught the eye of Andrew Lloyd Webber, eventually landing her the judging slot on Any Dream Will Do and a return to primetime television.

Today, as well as appearing on Celebrity Gogglebox alongside her close friend Duncan James from Blue, she’s also a regular presenter on Steph’s Packed Lunch, Channel 4’s weekday chat show. It’s an eight-hour round trip to Leeds from her Essex home for Denise, but she loves the show and its close-knit team.

‘It’s one of those rare shows that’s so much fun. I will eventually think of it the way I think of The Big Breakfast – with fond memories,’ she says.

There’s also a new two-part Channel 4 series called Secrets Of The Middle Aisle coming up, exploring the retail phenomenon that is the discount supermarkets’ middle aisles – those veritable treasure troves in Aldi and Lidl where shoppers can pick up anything from tech gadgets to garden furniture, pyjamas to pool inflatables, all at bargain prices.

‘They have a cult following, and the show’s even more relevant now with the cost-of-living crisis. People are changing the way they shop.

‘The snobbery is gone. It used to mean you were on the breadline if you shopped in these places but that’s all changed.

‘And it’s also fun. I just got a window vacuum cleaner – who knew they existed? Essentially, you can go in for your weekly shop and walk out with a paddle board or a drinks trolley. It’s brilliant.’

West End musicals are off the radar for now though. ‘I’ve stepped away from that at the moment because you can’t do eight shows a week as a single mum.

‘It’s almost impossible because you lose your evenings and your Saturdays, and with a tweenage daughter I’ve got to be around. That’s my priority.’

She is writing another play, having already performed her own successful one-woman show Some Girl I Used To Know in 2014. It drew partly on her own emotional history, punctuated by songs from the 80s and 90s and inspired by women who find themselves single at 40.

The play was revived last year for a series of charity livestreams directed by Denise’s friend Tamzin Outhwaite.

‘It’s just a natural thing to draw on your own experiences,’ she says. ‘Some Girl I Used To Know was cathartic.

‘It was like a form of therapy. I want to write another play but I can’t say what it’s about as you’ll get it straightaway, but it centres on two strong women. It’s possibly something I’ll do with Tamzin.’

Even through her darkest days, Denise insists on trying to stay positive. ‘When I have to make any decisions, I do them with a strong mind,’ she says. ‘I value what I can do and what I’ve got to offer and I don’t want to undercut myself.

‘I spent a long time trying to prove myself, and now I can afford to be a little bit choosy. I feel like I know what I want.’