The sporting world has farewelled cricketing legend Rod Marsh at a private funeral at Adelaide Oval on Thursday following the talented wicketkeeper’s death from a heart attack.

Marsh, 74, was rushed to hospital after he had suffered a massive heart attack while visiting Bundaberg in Queensland for a cricket charity event before passing away on March 4.

He died on the same day as cricket icon Shane Warne also died from a heart attack.

Fellow cricketing legend Dennis Lillee spoke about his former teammate during the ceremony for the first time since Marsh’s death.

‘I still can’t believe our mate, and mate too many, is not around anymore,’ Lillee began.

‘It’s taken me days to be able to write my thoughts down on his amazing bloke. I don’t want to talk about his cricket ability, that’s been very well documented. It’s the person Rod Marsh that I love.’ 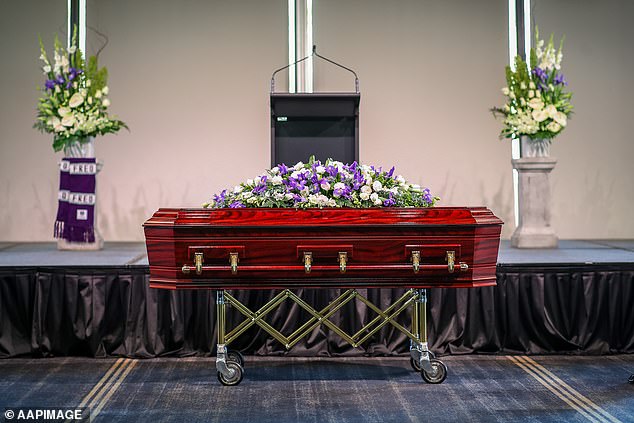 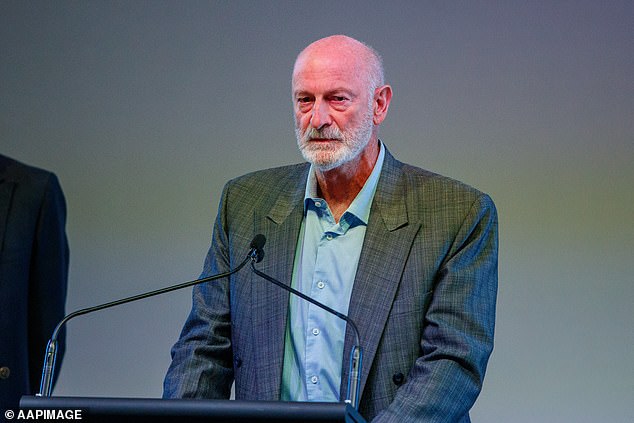 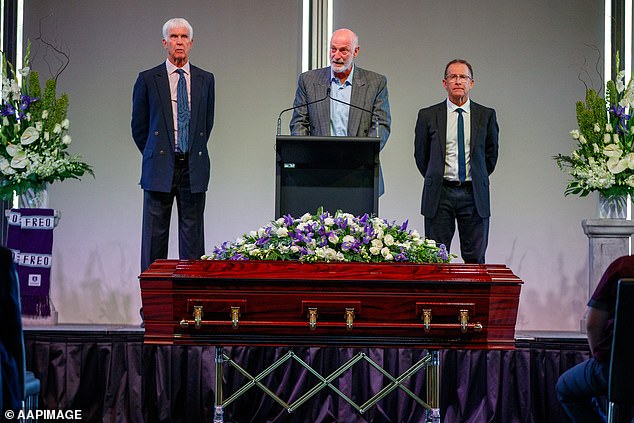 Lillee was joined on stage with teammates John Inverarity and Bruce Laird, who all shared memories of Marsh and paid their respects 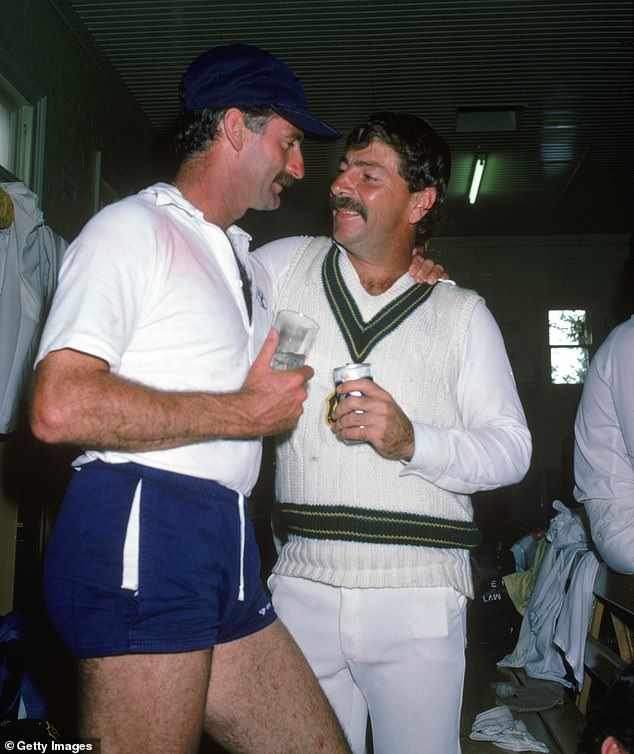 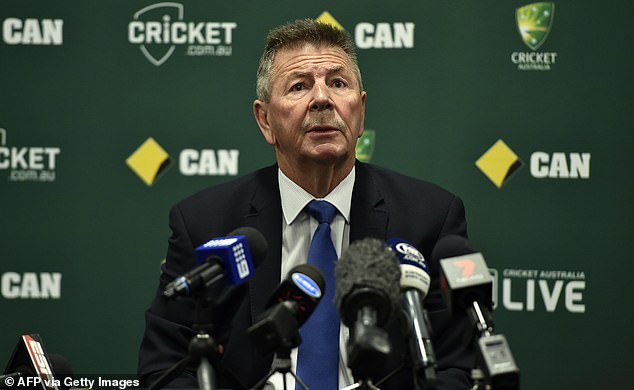 Lillee was joined on the during the service by teammates John Inverarity and Bruce Laird, who all shared memories of Marsh and paid their respects.

The renowned fast bowler started his speech by recalling a significant memory he shared with Marsh during their cricket-playing days where the pair drank a soft drink and beer respectively.

Lillee continued sharing more memories he had with the wicketkeeper with the funeral attendees.

‘Again, I miss my mate, and will keep remembering the good times. He was a one off, let’s all celebrate a life well lived.’

TV personality James Brayshaw hosted the service. He opened the ceremony by speaking about the cricketer’s life, family and career.

‘We are here to celebrate, to respect the passing of a great man,’ he stated.

‘Thank you for coming here today to celebrate the life of Rodney Marsh. As his only brother, I’ve known him for longer than anybody else on this planet,’ Graham began.

‘Only of my earliest memories of Rodney was playing cricket with him in the background,’ he tearfully recounted.

The eldest Marsh brother recalled memories of the two boys playing cricket in their street, Rod’s talents in sport and in music, going to school and family moments.

He often choked up during his speech as he spoke highly of his brother.

‘I always remember my brother Rod for his devotion, loyalty, love for his family and friends.’

He concluded his moving speech: ‘They say younger brother’s often walk in the shadow of their older brother’s, but baby brother, it’s been a honour to walk in your shadow.’

Following on from his brother’s speech, fellow wicketkeeping great Adam Gilchrist narrated a mini-documentary on Marsh’s life that played out for attendee’s on the projector screen at the funeral. 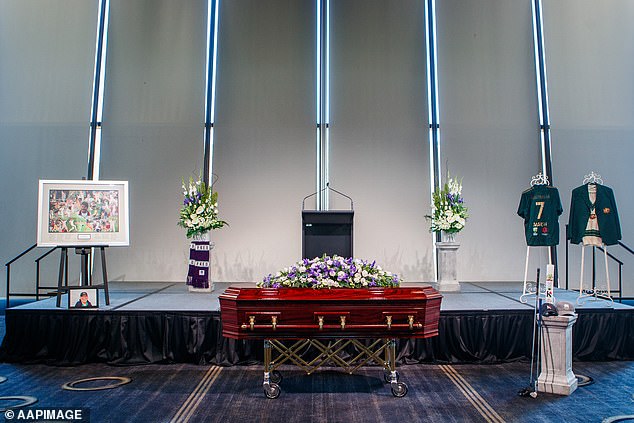 Marsh’s crimson-coloured coffin was decorated with flowers on top. Framed pictures of the cricketer and the Australian cricket team he played with were placed on the stand behind the coffin 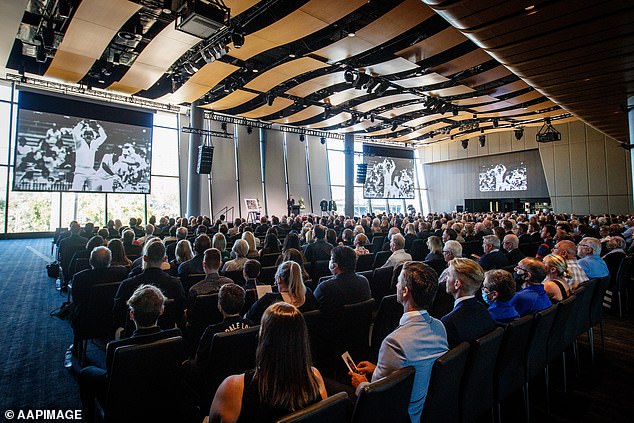 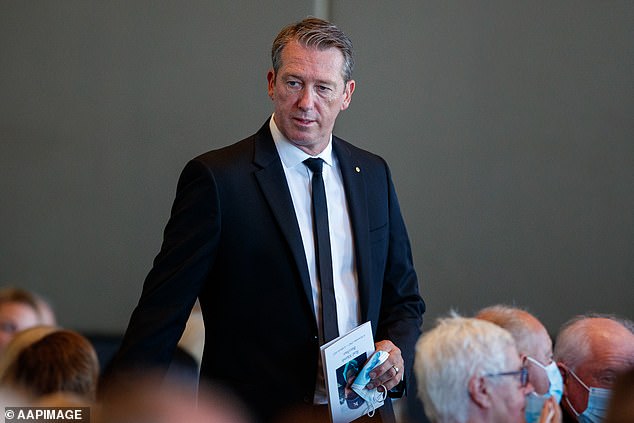 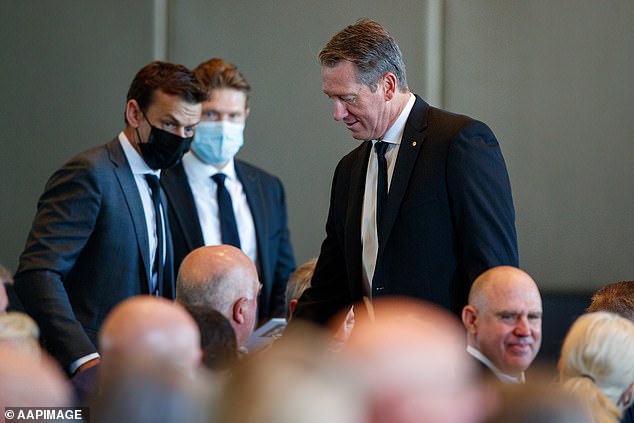 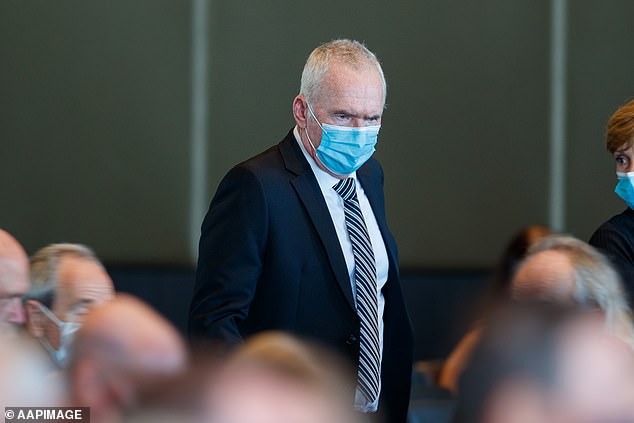 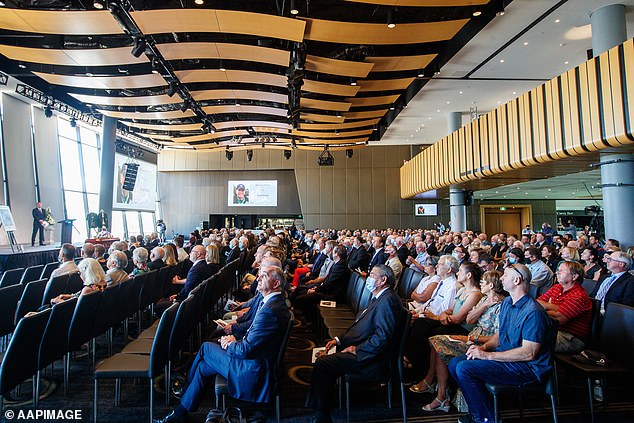 Family, friends and sports stars began to quickly file into the room for the funeral service

Rod Marsh’s oldest son Paul eventually took to the stage to speak about his father.

‘Words could never do justice to how much respect, gratitude, and appreciation I have for what Rod did for me and taught me about cricket and, more importantly, about life,’ he said.

‘It’s been an incredibly tough and emotional few weeks for our family, but as we got today’s celebration of Dad’s life, the two overriding emotions I have him are pride and gratitude.’

Former teammates, associates, close friends and family continued to share their memories of the cricketer before the funeral came to a close.

Rodney Marsh’s grandchildren placed roses on their grandfather’s coffin at the conclusion of the ceremony.

Images of the sportsman’s coffin and the initial proceedings were released earlier in the day.

Marsh’s crimson-coloured coffin was decorated with flowers on top. Framed pictures of the cricketer and the teams he played with were placed on the stand behind the coffin.

Marsh’s cricket shirt and blazer with the number 7 emblazoned on the back can be spotted off to the side next to a candle with the Cricket Australia logo, while a Fremantle Docker’s scarf hung off a marble column in the background – the AFL team he barracked for.

Western Australia will hold a state funeral for the cricketer later this month, which is where Marsh is originally from.

Marsh played 96 Tests for Australia and went on to serve as a selector for the national team.

He scored 3,633 runs and took 355 dismissals during his illustrious career between 1970 and 1984 and was the first Australian wicketkeeper to score a Test century in 1972-73.

He went on to score another two centuries and racked up 16 half centuries for his country. He was inducted into Cricket Australia’s Hall of Fame in 2005. 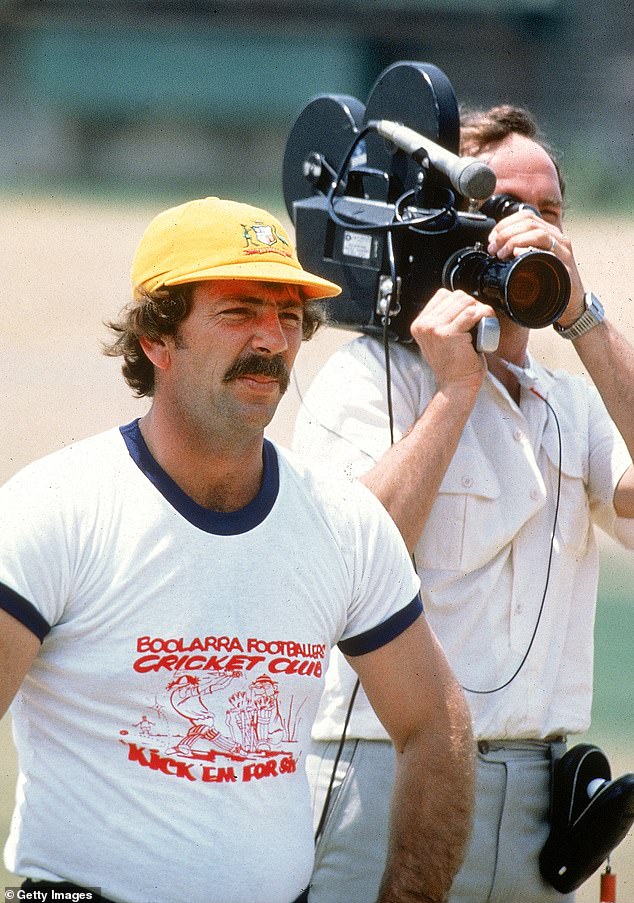 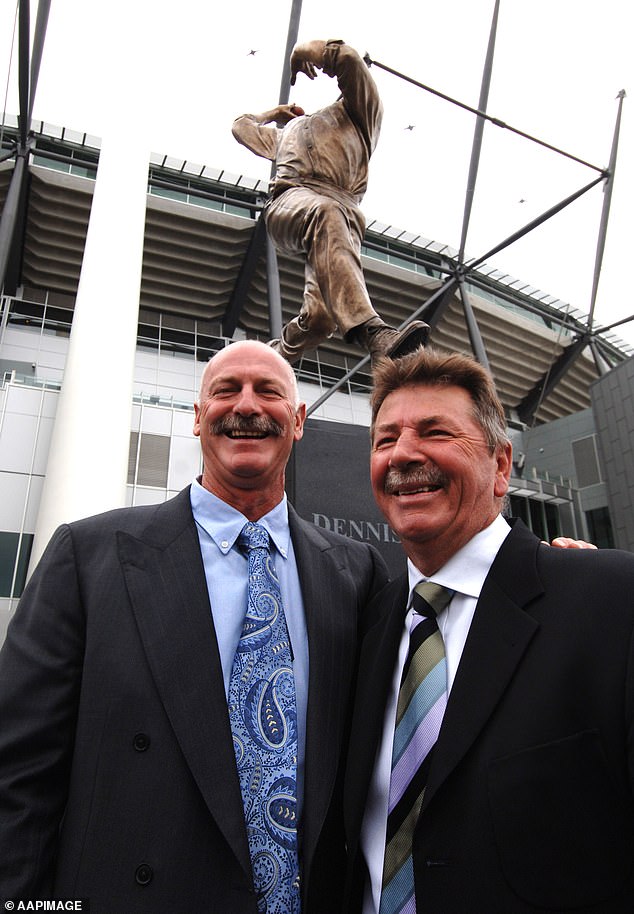 His partnership with fast bowler Dennis Lillee is still regarded as one of the world’s best bowler-wicketkeeper combinations of all time. The duo claimed 95 dismissals, which is still a Test cricket world record to this day.

In 1977, he was one of a host of Test players who defected to be part of Kerry Packer’s breakaway World Series Cricket.

Marsh also had a reluctant involvement in Australia’s underarm bowling controversy in a one day international against New Zealand in 1981.

He was famously captured shaking his head behind the crease after Australian captain Greg Chappell ordered his brother Trevor to bowl an underarm on the final ball to ensure their opponents couldn’t hit a six to tie the match. 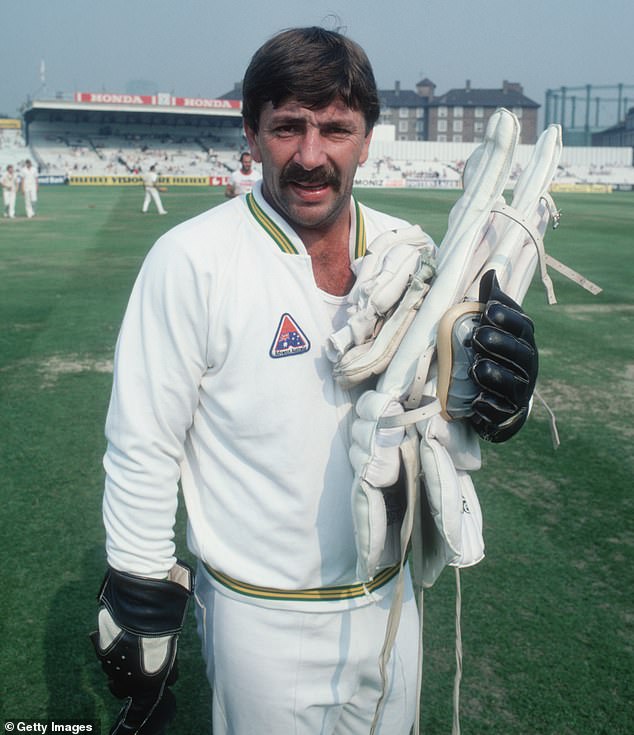 Marsh is survived by his wife Ros and sons Dan, Paul and Jamie.

The family confirmed the cricket legend was in a critical condition prior to his death.

‘We know there is a lot of interest in Dad’s condition and our family has been overwhelmed by the messages of love and support from all around the world,’ a statement read.

‘We have listened to and read every one of them and we are incredibly grateful to everyone.’