Dennis the Menace gets name change ahead of new TV series

Dennis the Menace is moving with the increasingly politically correct times and is dropping his moniker.

The Beano cartoon legend will shortly be known only as Dennis, with publishers DC Thomson, who has published the comic since 1938, claiming he had ‘made mistakes in the past’ but had now ‘moved away from his “menacing” ways’.

The name change, which will be included in the weekly comic and annual, coincides with the released of a new CBBC series. The new show, Dennis and Gnasher Unleashed, has adopted a slightly different approach to the classic Dennis the Menace show.

In the programme, instead of hanging around with boys of a similar mischievous temperament, two of his new friends include girls. One is JJ, a rock drummer, and Rubi, who is in a wheelchair.

Mike Stirling, head of Beano Studios Scotland, said Dennis had not been a menace for years despite carrying the title in the 2017 Beano annual.

He said: ‘Today’s Dennis is a flawed hero, a ten-year-old boy who fears nothing and sometimes gets into trouble as a result.’

The new Dennis was also seen Brussels sprouts – something which the menace would never have dreamed of doing.

Arch enemy of Dennis and Gnasher, Walter, is no longer a ‘softy’ but is modeled around someone who looks down on childish adventures.

It is seen as part of a move to steer the popular comic book away from being seen as endorsing bullying behaviour. The Beano denies it is pandering to political correctness but is in fact simply moving with the times. 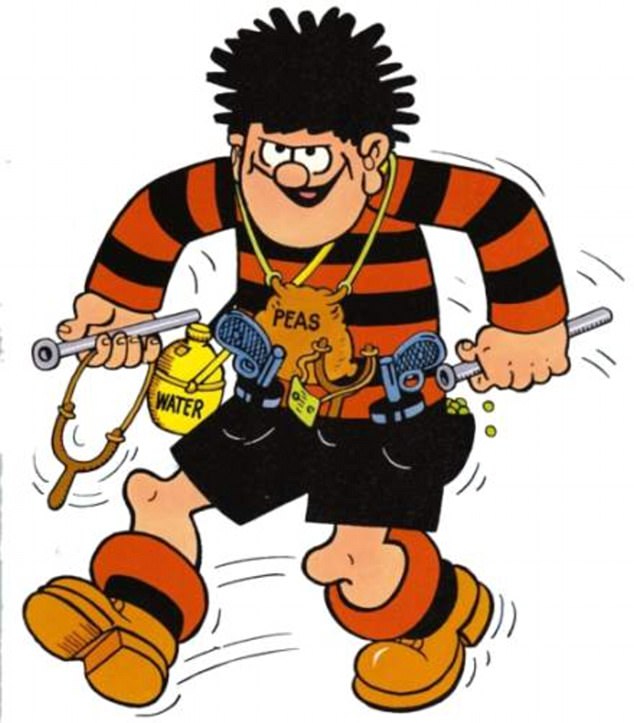 Dennis will no longer appear with his weapon of choice, the catapult, and pea shooter