Derek Jeter has met with members of the softball and baseball teams from Marjory Stoneman Douglas High School.

Jeter met on Friday with the players from the high school where 17 were killed last week, mingling with the young athletes before the Miami Marlin’s spring opener against the St. Louis Cardinals in Jupiter, Florida.

The former New York Yankees shortstop turned Marlins CEO told players that they can help the community heal, drawing on his experience in dealing with 9/11.

‘When I was in New York playing after September 11, obviously you’ll never forget what happened, but at least for those three hours we gave people something they could cheer for,’ Jeter said. 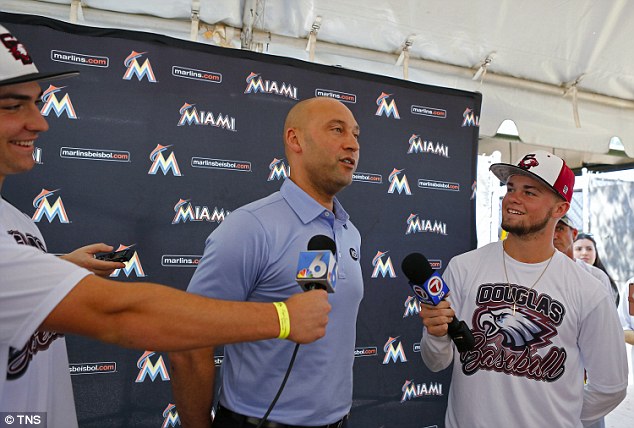 ‘We appreciated that and we sort of took that and ran with it as an organization. I think a lot of times professional sports teams, sports teams in general, can help distract people, so to speak,’ he continued.

Before the first pitch, the Marlins and Cardinals observed 17 seconds of silence in memory of the victims. Douglas players and coaches watched from seats behind home plate.

All 30 MLB teams wore Stoneman Douglas caps either before or during their first practice games on Friday in a show of solidarity.

‘It’s helping us feel better and it shows that we are one big family,’ Douglas center fielder Ryan Shinko said. ‘It’s not just us.’

Douglas pitcher Connor Brian, a senior who will play baseball at Middle Tennessee State next season, had the names of all 17 victims written on the bill of his cap.

‘It just gives me a remembrance when I’m pitching to do it for them,’ Brian said. 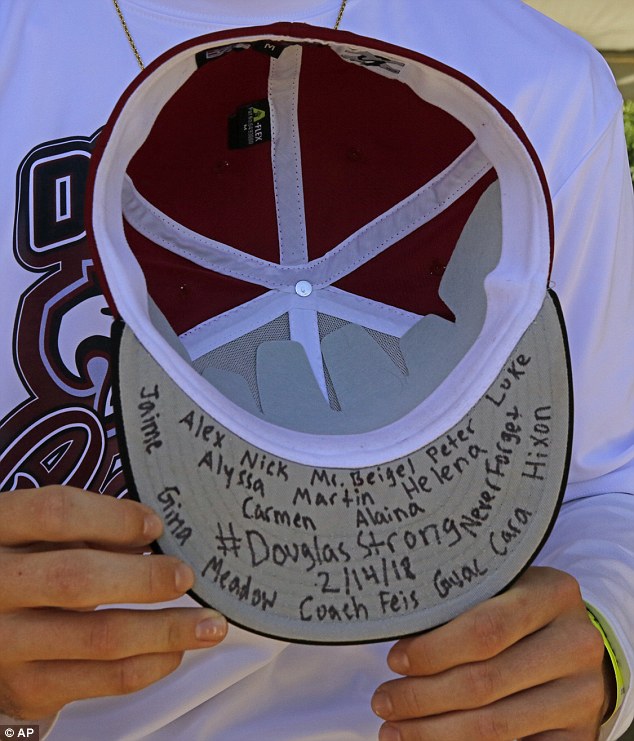 Stoneman Douglas baseball player Connor Brian holds a hat with the names of the victims of the school shooting. ‘It just gives me a remembrance when I’m pitching,’ he said 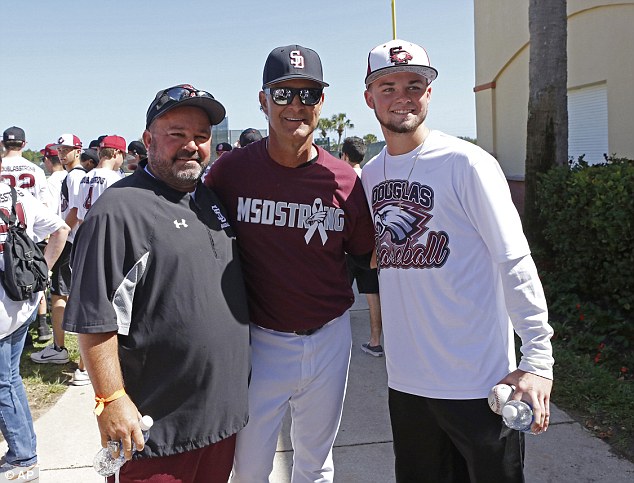 In nearby West Palm Beach, Stoneman Douglas baseball coach Todd Fitz-Gerald and his sons were guests of the Houston Astros for their spring opener against the Washington Nationals.

Fitz-Gerald said it was a ‘relief’ to get back to the sport he loves and to stop thinking, at least for a moment, about the Valentine’s Day mass shooting.

‘You can’t put it into words,’ he said, fighting back tears. ‘I think it’s great what Major League Baseball is doing to show support for our community and our school. It’s been a rough week and just being out here … (gives me) a sense of freedom.’

Both Fitz-Gerald and his son Hunter, a junior, were on campus during the shooting, in which 14 students and three teachers were slain.

The elder Fitz-Gerald wore a crisp white shirt that was adorned with the words ‘Douglas Strong’ as he chatted with Astros manager A.J. Hinch and several other players and coaches during morning workouts. He and Hunter accompanied Houston general manager Jeff Luhnow on the field before the game to hoist the World Series trophy. 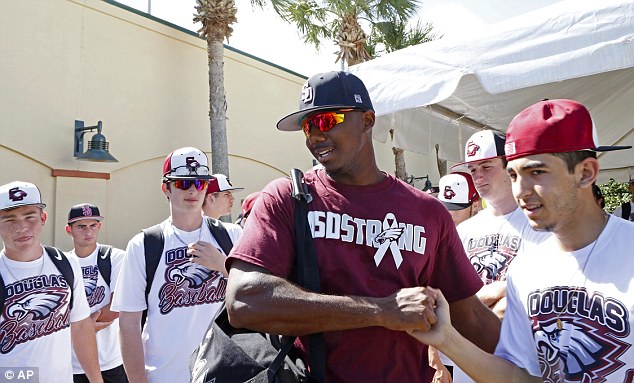 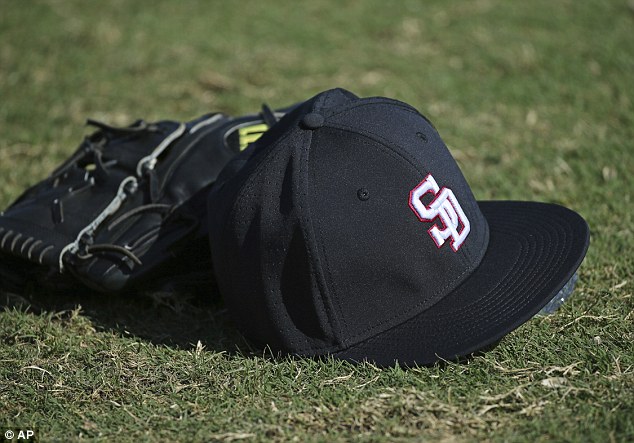 Douglas pitcher Connor Brian, a senior who will play baseball at Middle Tennessee State next season, had the names of all 17 victims written on the bill of his cap.

‘It just gives me a remembrance when I’m pitching to do it for them,’ Brian said.

‘In Parkland, there’s not a lot of smiles,’ said Dustin Brian, Connor’s father and a former Douglas assistant coach. ‘That’s why I think this is so cool, getting them away from the community.’

He left camp in Arizona to return to Parkland the day after the shooting, gave an emotional speech at a candlelight vigil and later visited victims in the hospital.

He wasn’t in the lineup for Chicago’s game on Friday, but wore the hat bearing his high school’s initials while working out.