This stomach-churning footage shows a ‘gross’ cyst oozing with yellow pus after it was popped.

The large lump, filled with the pungent fluid, was located on the unnamed man’s back – slightly above his back tattoo.

Dr Michael Lewis, based in Woodland Hills, tries to keep the patient calm and asks him to let him know if he feels anything ‘sharp’.

The large lump, filled with the pungent fluid, was located on the unnamed man’s back – slightly above his back tattoo

The squeezing of the large cyst began with Dr Lewis swabbing the area with iodine.

After slicing open the swollen head of the mass, he then prises open the cyst to ‘tease’ the build-up of pus out.

Placing his fingers either side of the lump, pressure is applied to force a string of the yellow liquid from his cyst.

Dr Lewis, who regularly performs such procedures, then tells his patient: ‘I’m sure you can smell that. If not, you’re about to.’

He then describes the smell as ‘gross’ before attempting to cut out the sac, which contained the pus, in one gentle tug. 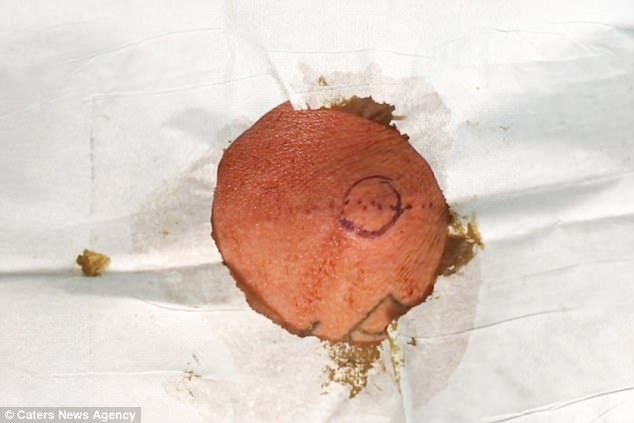 Dr Michael Lewis, based in Woodland Hills, tries to keep the patient calm and asks him to let him know if he feels anything ‘sharp’ (pictured: the cyst before it was squeezed)

Cysts are noncancerous, closed sac-like structures that can be filled with fluid, pus or other materials.

They are common and can appear anywhere on the skin.

Cysts can develop as a result of infection, clogging of the sebaceous (oil) glands or around foreign bodies, such as earrings.

They are round, dome-shaped bumps that tend to be yellow or white in colour.

Usually painless, they can become tender, sore and red if infected.

Most cysts disappear on their own, but some may need to be drained to relieve pain.

Self-treatment by squeezing or popping the cyst yourself is not advised as it could exacerbate the underlying cause.

With all the fluid removed, the wound is cleaned to prevent any future growths.

Dr Lewis, who runs his own practice, said: ‘As a family practice physician, we are taught to treat all ailments.

‘Our scope of practice is womb to tomb. Therefore, part of my practice is treating lumps and bumps. I have always enjoyed performing procedures like this.

‘Nothing bothers me too much as far as procedures go, however if the smell is bad, it can be really tough.’

Dr Lewis, who regularly records himself popping spots and cysts, has shot to fame in recent months.

Dr Pimple Popper, or dermatologist Dr Sandra Lee, has become a viral sensation with clips of her surgical procedures in removing huge pimples and cysts from patients.

The California-based doctor has amassed more than three million subscribers to her YouTube channel.