Deutsche Bank’s chief executive has scolded two of his managing directors who had £1,500 suit fittings while colleagues were in tears over mass redundancies.

Christian Sewing revealed that he personally telephoned the pair of bankers to rebuke them for ordering tailors from upmarket Fielding & Nicholson into the London headquarters on the day the company announced 18,000 job losses.

In a call which the bank boss said the duo ‘won’t forget’, he carpeted them for behaving in a manner which ‘in no way corresponds with our values’.

Ian Fielding-Calcutt and Alex Riley, of Fielding & Nicholson Tailoring, were pictured carrying suit bags out of the office after measuring up managing directors at the firm 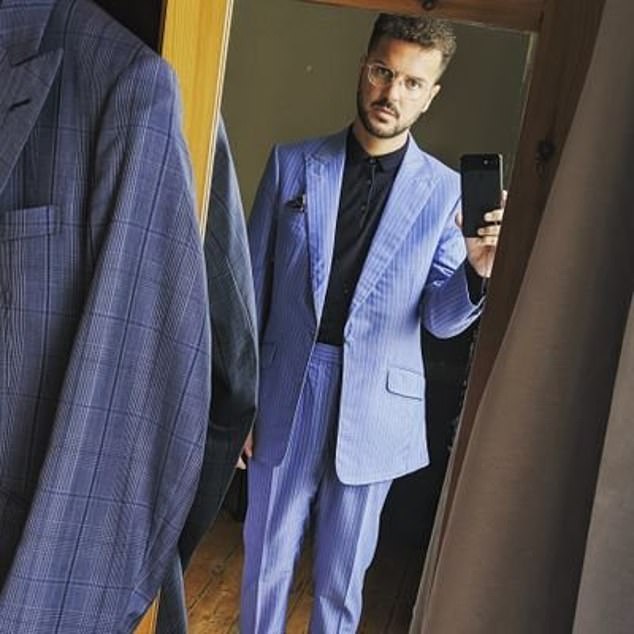 Tailor Mr Riley posing in a suit. He later tweeted about arriving at the Deutsche Bank offices 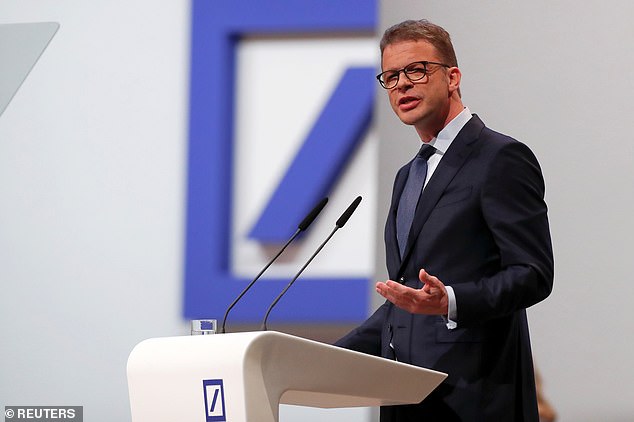 Christian Sewing (pictured) revealed that he personally telephoned the pair of bankers to rebuke them for ordering tailors from upmarket Fielding & Nicholson into the London headquarters on the day the company announced 18,000 job losses

‘I can’t understand that someone would call tailors to fit suits on Monday. On the same day, we had to tell many colleagues in share trading that they had to leave,’ he told German newspaper Handelsblatt.

Sources estimate that 3,200 could lose their jobs at the London office, with an IT contractor claiming 100 people had been made redundant from a single floor.

Ian Fielding-Calcutt and Alex Riley, who work for Fielding & Nicholson Tailoring, were among those pictured leaving the office on Monday holding several suit bags.

It was thought they were among the hundreds of employees seen leaving the office clutching personal belongings and redundancy envelopes, and their image was beamed around the world.

Many believed a tote bag emblazoned with the word ‘Bitcoins’ held by one of the men to be a satirical dig at the German firm by a sacked banker. 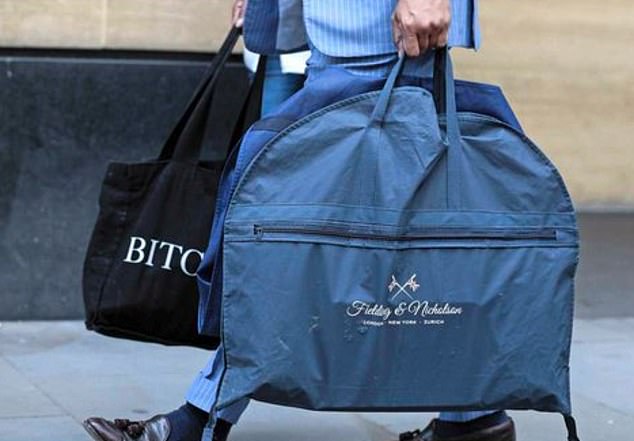 It has now been revealed that the two men were in fact tailors from one of capital’s most premier bespoke tailoring providers, Fielding & Nicholson Tailoring 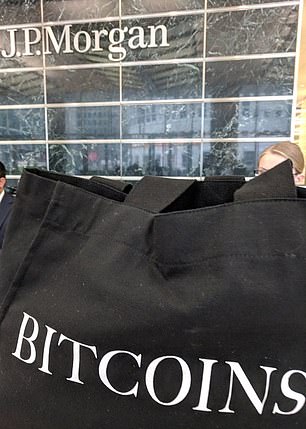 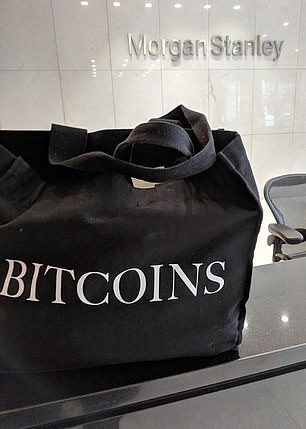 But it has now been revealed that the two men were in fact tailors from one of capital’s most premier bespoke tailoring providers.

Mr Fielding-Calcutt, who owns the firm, told website Financial News who revealed the story: ‘It’s just a coincidence that we were snapped coming out of the building at the time others were being sacked.

‘The assumption was we were one of the bankers being fired, but we were there to fit suits for senior members of staff.’

‘Our timing was not great,’ added Mr Fielding-Calcutt. ‘I think a lot of the people getting laid off were traders of some sort, who don’t wear suits, and so we just went ahead as normal with our clients who obviously weren’t affected by the cuts.’

A wave of job cuts now looks set to hit Frankfurt, where recent changes in labour law making it easier to fire people earning €234,000 (£210k) could encourage the bank to cut senior staff. 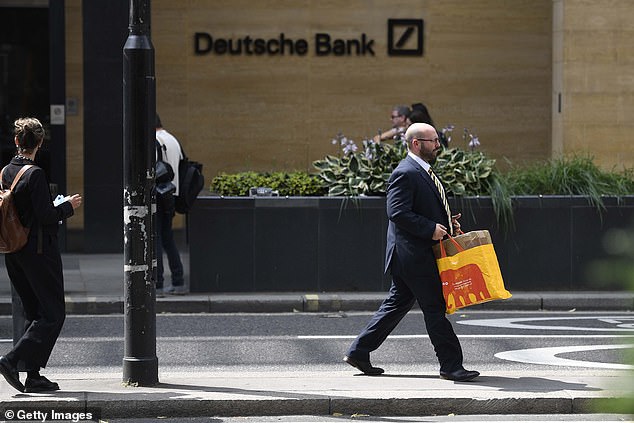 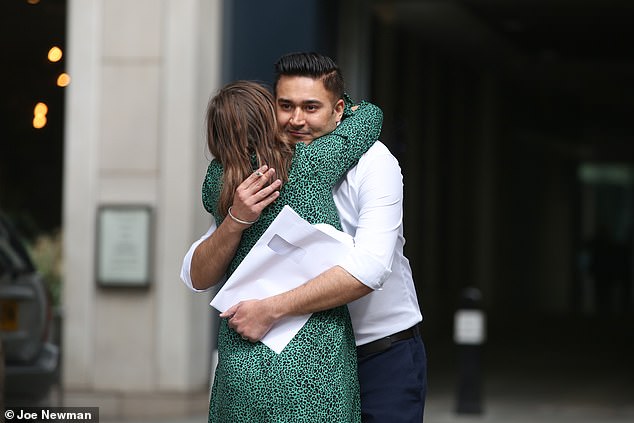 A city worker outside Balls Brothers wine bar, Central London, with a white envelope containing what is believed to be a redundancy notice from Deutsche Bank. The bank has started a cull of 18,000 jobs 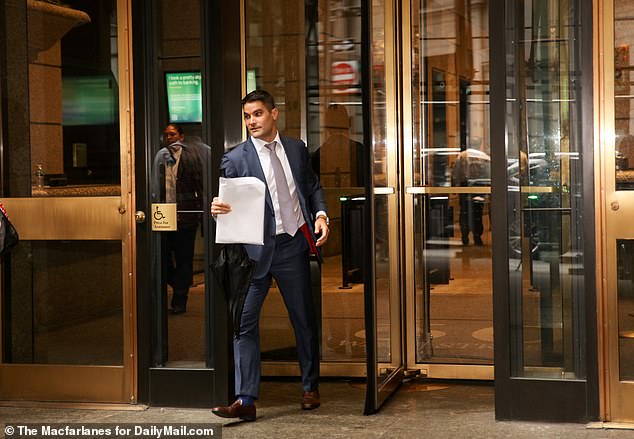 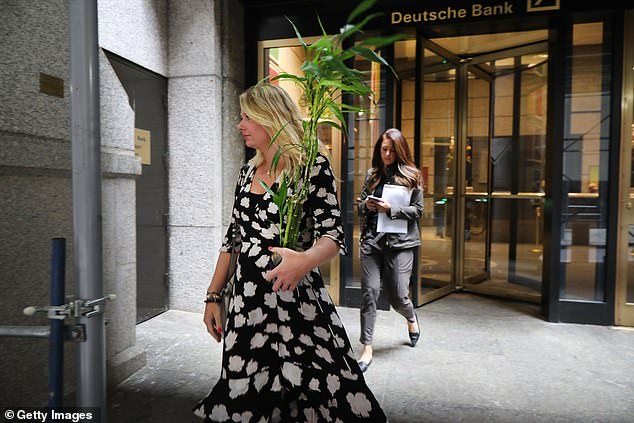 On Monday, the Frankfurt-headquartered bank said the mass layoffs would reduce its annual costs by £5.4billion.

The 91,500 worldwide employees are set to be cut by just over 20 per cent, to 74,000, in an unprecedented round of departures for Deutsche.

The firm sacked workers in Sydney, Hong Kong and across the Asia-Pacific region on Monday morning as it launched one of the biggest restructurings of its investment bank since the financial crash.

Meanwhile, an equities professional at the firm’s New York office told eFinancial News: ‘9.30am is when most people in my division have been asked to report to the auditorium to be fired.’

Staff in London were reportedly told just hours after Deutsche Bank announced the overhaul that they had until 11am to pack up their belongings.

One man, who was told his door pass would stop working in a few hours, told The Telegraph’s banking editor Lucy Burton: ‘I’m trying to get my head straight’.

Deutsche has insisted it will not fire its retail employees in Germany – where employment laws are far more rigid – against their will until mid-2021. 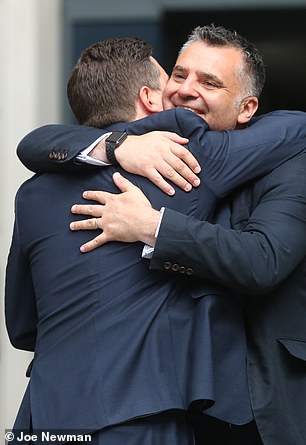 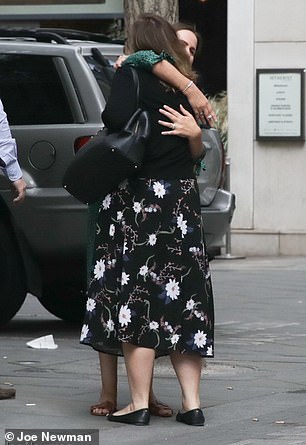 City workers hugged outside Balls Brothers wine bar near Deutsche’s officers, where trade was picking up this afternoon amid the job cuts. It is unclear if those pictured were employees of the bank 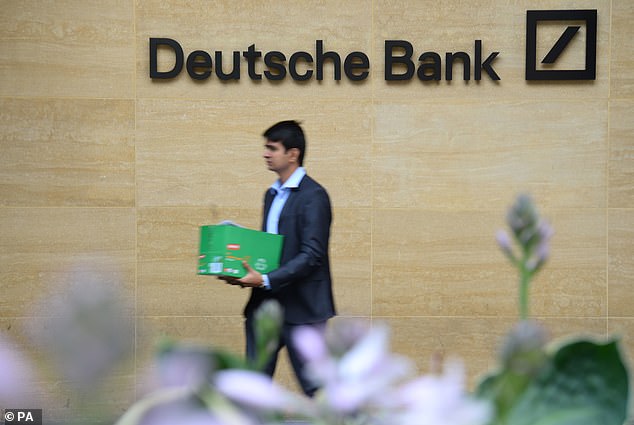 Despite job losses in London, the bank confirmed it still intended to move into its HQ to the city’s Moorgate area once the current development was finished in 2023.

In London, the Guardian reported how 100 people had been made redundant on the fourth floor while some members of staff were seen leaving the office in tears.

Chief executive Christian Sewing, who makes £6million a year in his role, said the job cuts ‘have been the most difficult and painful part of our decision making’ as ‘people and their fates are very important to us’.

Frankfurt looks to be next in the line for job cuts as Deutsche Bank announced it was scrapping its global equities business.

Staff at the German retail bank will be safe from being dismissed against their will until 2021 thanks to more rigid labour laws in the country.

‘It’s the quiet before the storm,’ one Frankfurt managing director told efinancialcareers. ‘We’re expecting Asia, the U.S. and London to be first.’

The cut backs from the bank – which paid billions in fines and settlements after the 2008 financial crash, when when Lehman Brothers failed – comes after concerns the UK economy is at a standstill.

Chris Williamson, economist at IHS Markit, told The Financial Times: ‘The latest downturn differs from that seen in 2016 as it has followed a gradual weakening in the rate of economic growth rather than being a sudden and brief collapse in output after the ‘shock’ referendum result.’

Deutsche Bank said that it would drop its stock sales and trading unit as part of a plan to exit more volatile investment banking activities.

It said it would cut roughly a quarter of its total cost base through steps such as dropping the investment bank’s stock-trading business.

It would also slim down its division focused on fixed-income investments.

The bank would not say where the cuts would fall, but many of its investment banking activities are carried out in Wall Street and London.

It will also slim down its division focused on fixed-income investments. By doing that, the bank is to focus on areas with steadier earnings such as serving corporate customers. 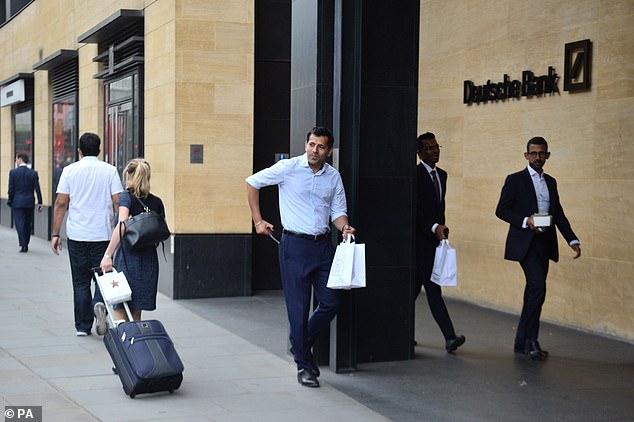 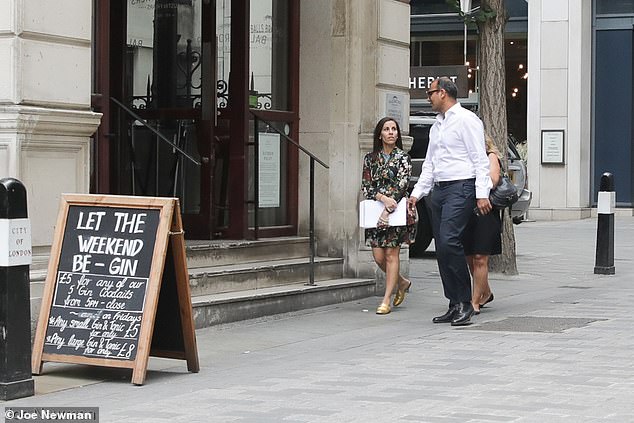 A City worker outside Balls Brothers wine bar holding a white envelope, while speaking to a colleague

The bank would also create a separate unit to dispose of investments that are less profitable or no longer fit its strategy.

The bank said it did not expect to have to raise additional capital from shareholders.

On Monday, Mr Sewing said: ‘Today we have announced the most fundamental transformation of Deutsche Bank in decades.

‘We are tackling what is necessary to unleash our true potential: our business model, costs, capital and the management team.

‘We are building on our strengths. This is a restart for Deutsche Bank – for the long-term benefit of our clients, employees, investors and society.’

The move follows the failure of merger talks with German rival Commerzbank.

Deutsche Bank said the combination would not make business sense, but that left open the question of what strategy the bank could pursue to make its business leaner and more profitable.

For years, Deutsche Bank has struggled with regulatory penalties and fines, weak profits, high costs and a falling share price.

The bank went three straight years without turning an annual profit before recording positive earnings for 2018.

Why is Deutsche Bank struggling? How the latest turmoil comes after years of pain for the institution and its investors 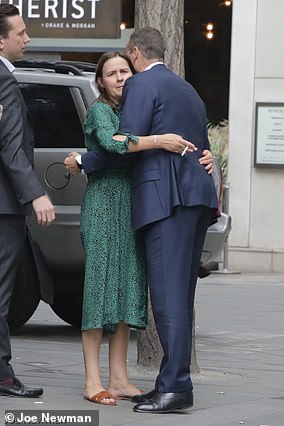 People hug outside the Balls Brothers bar, where some Deutsche Bank workers were heading this afternoon. It is unclear if the people pictured were employed by the bank

By Simon Lambert for This Is Money

Deutsche Bank’s massive cuts are the culmination of many years of pain for the bank and its investors.

After riding the financial boom years from 1999 to 2007 – as it planned to become the Goldman Sachs of Europe – Deutsche Bank has largely suffered ever since the financial crisis hit.

The aftermath of the crisis saw much tougher rules brought in for banks, requiring them to hold more capital, rely less on debt and play things safer, leaving Deutsche struggling.

Deutsche had expanded dramatically after buying US institution Bankers Trust in 1999, growing its investment banking operation substantially and was for a short period in 2007 considered the world’s largest bank.

However, much of that expansion was debt-fuelled leaving Deutsche as also the world’s most leveraged bank.

Deutsche was not laid as low by bad bets during the financial crisis as many of its giant rivals, but it was hit hard as regulators reacted to the crunch by demanding that banks held more capital. Meanwhile, investors shied away from the lucrative but risky trades that had made global mega-banks so much money.

Deutsche Bank has had to repeatedly raise money from investors to meet capital requirements, with £30billion of equity raised over the past ten years, and its share price has sunk from almost €110 at its peak to about €7.

After the financial crisis, the bank scaled up its equity trading division in an attempt to make more money, but that has not paid off and now it will bear the brunt of the cuts.

Along the way there has been a €2.5billion Libor scandal fine – levied for rigging the key global interest rate – and a €7.2billion fine for mis-selling US mortgage backed securities.

Deutsche Bank shares lost more than half their value in 2018 and it has only made one annual profit in the last four years, in 2018.

A proposed merger with fellow German lender Commerzbank collapsed earlier this year and while the scale of the cuts comes as a surprise – with 18,000 jobs hacked from its 91,500-strong workforce – the arrival of a radical plan was not.

Restructuring costs of €3billion will push Deutsche Bank to a €2.8billion loss for the second quarter of 2019, while a bad bank with €74billion of legacy business held in it aims to distance the bank from the past.

Deutsche will ask to be allowed a temporarily lower level of core tier 1 capital – a key financial health measure – so that it can fund the €7.4bilion restructuring without calling on investors for more cash.

Boss Christian Sewing hopes this plan will call time on the era when Deutsche tried to crack Wall Street, investors will hope it means it finally starts making more money and increases profit margins, and regulators will hope it puts one of the world’s famous banks on a better financial footing.