Residents were sent ‘insane’ by a white van alarm that rang constantly for nearly 50 hours.

Frustrated locals said they could not escape the racket in Plymouth, Devon, because the owner of the van had gone on holiday.

The noise even blasted through windows as it echoed around the street from 7am on Sunday to 8.15am today.

Frustrated locals in Devon, Plymouth, could not escape the racket caused by this van’s alarm

Residents were forced to bear the noise as the owner of the van had gone on holiday and the AA could not remove the vehicle.

Julie Hewitson, 52, said: ‘I first heard it at about 11am on Sunday but people said it had been going since 7am.

‘It was constant and didn’t stop. We were all going insane.’

The van appeared to be owned by a company company called ADT Fire and Security, as it was plastered with its  branding.

Staff told Ms Hewitson that someone would be over to remove the vehicle – but they never arrived.

She said: ‘A man from the removal company was here and I thought ‘great’.

‘But he needed them to sign for it and no one turned up so he had to go. 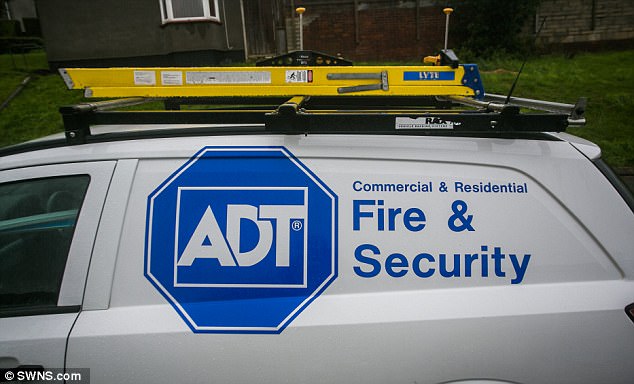 The alarm rang for almost 50 hours from 7am Sunday until it was finally turned off at  8.15am today

‘When I spoke to ADT earlier today they said someone from the AA would be coming out to take it away.

‘I could hear it from inside my house.

‘There’s a house right beside it with a couple and their three young children who were going back to school.

‘They had to close all their windows. We just didn’t know what to do. It just drove everyone nuts.’