Devoted elderly couple to be separated by care home funding

A couple who have been married for 67 years and have never spent time apart may be split up and moved to different care homes because of a lack of council funding.

Frank Springett, 91, and his wife Mary, 86, are currently in the same care home in Wootton Wawen, west Midlands.

But when their family runs out of money to pay for private care, the council will split them up because their needs are different, the couple’s daughter Joanne Downes fears.

The local social services department has agreed to contribute to Mary’s care but has said Frank is well enough to live in a flat by himself, Mrs Downes said.

Frank Springett, 91, and his wife Mary, 86, are currently in the same care home in Wootton Wawen, west Midlands

She is now battling for funding to keep them together, saying separation will devastate them because they have never spent time apart.

Frank, a retired factory worker, and Mary, who used to work for Solihull Social Services, lived independently in their own home in Chelmsley Wood until March of this year when their failing health meant they had to go into care.

Mary suffers from severe Alzheimer’s Disease, while her husband has the muscle stiffness condition polymyalgia rheumatica, and is also Type 2 diabetic and totally deaf.

Mary’s Alzheimer’s got progressively worse and led to her going wandering and leaving the house and being brought back by neighbours and even the postman on one occasion. She is now incapable of holding a conversation.

Frank has had four falls since being in the home and needs a frame to get around and his hands are swollen due to arthritis.

Their two children, Roderick Springett and Joanne Downes, are battling to keep them together in Cedar Lodge.

Their third child, Gerald, died of a brain tumour in 2005.

Joanne, aged 57, who lives in Wootton Wawen, said because her parents owned their own home they were not eligible for any help paying care home fees. 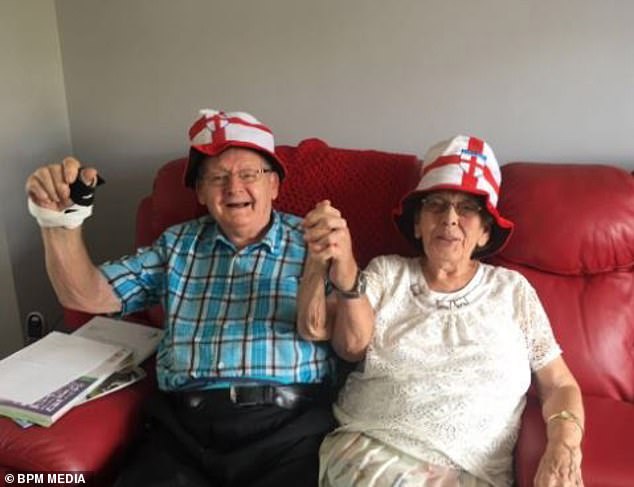 When their family runs out of money to pay for private care, the council will split them up because their needs are different, the couple’s daughter Joanne Downes fears

Joanne said: ‘The money is running out and currently stands at £106,000. Next year, probably in April, the couple’s money will reach the upper savings limit at which the council steps in and gives financial assistance.

She said to plan ahead, they had started discussing with Solihull Social Services in the summer about what would happen when they dropped below the £46,000 threshold.

‘To date we’ve had no funding from Solihull Social Services at all – which we understand because we have money to pay,’ she said.

‘But they won’t pay anything for my father’s fees because they say he can look after himself.

‘They say he can live in a flat in the community with carers coming into him.’

Mrs Downes said the reason they put Frank in the care home with his wife in the first place was because the care package they set up wasn’t working.

‘I asked social services how he would visit my mother if he lived in a flat and they didn’t have an answer,’ she said.

‘I asked about my parents’ emotional needs as that needs to be taken into consideration.

‘It would devastate my mother if my father was not with her, and vice versa.

‘They are a couple who have been together 70 years, married for 67 years and have never ever spent time apart.

‘I cannot and will not accept that they cannot be together.’ She said both needed the round-the-clock care Cedar Lodge provided. Cedar Lodge Care Home in Wootton Wawen.

The couple are also happy and settled there and have made lots of friends.

In May, on the day of Prince Harry and Meghan Markle’s wedding, they renewed their vows, with the home laying on a vicar to perform the ceremony and a cake and photographer.

‘The home they are in is a church home, something which is important to both my parents,’ Mrs Downes said.

‘It is kind and caring and that is the most important thing.’ Frank’s GP supports the family’s bid to keep him in Cedar Lodge and has written letters saying that.

Mrs Downes said: ‘I don’t know what we will do when the money runs out – I’m at breaking point, this whole situation is making me ill.

‘I can’t let my father know what is going on as it will kill him.’

A spokesman for Solihull Council said they were working with Mrs Downes to resolve the situation.

‘We understand that couples who have been married a long-time often wish to stay together when one of them moves into residential care.

‘We respect their right to do so. In some situations people decide to fund themselves, and we do our best to make them and their family aware of the financial implications of this.

‘If people’s care needs or financial circumstances change as time passes, we would reassess their situation.

‘We would be happy to meet in person with the family to explain things further.’