A high-profile priest who served as national co-chair of ProLife Voices for Trump has been defrocked by the Vatican for ‘blasphemous communications on social media’ and ‘persistent disobedience’ of the diocese.

Frank Pavone, 63, was dismissed as a priest by the Rome-based Prefect of the Dicastery for the Clergy on November 9, and the decision was shared with all U.S. clergy on December 13.

‘Father Pavone was given ample opportunity to defend himself in the canonical proceedings, and he was also given multiple opportunities to submit himself to the authority of his diocesan bishop,’ the Vatican said, in a letter sent by Archbishop Christophe Pierre, the Apostolic Nuncio to the United States.

‘It was determined that Father Pavone had no reasonable justification for his actions.’

Pavone told Catholic News Agency he had not been notified about the Vatican’s judgment.

He tweeted in response: ‘Hi friends… So in every profession, including the priesthood, if you defend the #unborn, you will be treated like them! The only difference is that when we are “aborted,” we continue to speak, loud and clear.’

He then recorded a video posted to social media on Saturday, decrying the ‘constant persecution’ he received and saying he was forced out because most Catholic priests were Democrats, and disliked his pro-Trump, pro-life stance. 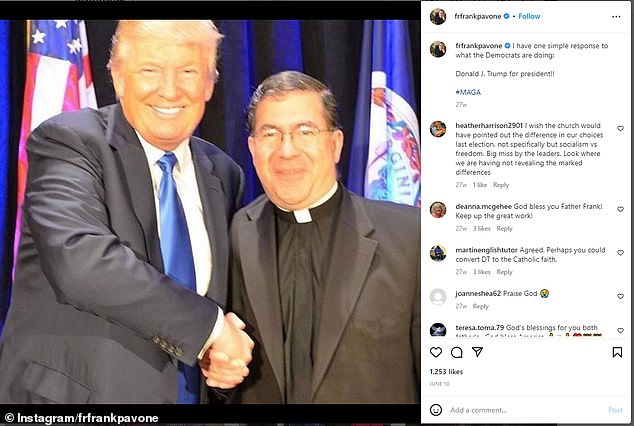 Pavone worked as a co-chair for ProLife Voices for Trump, and remains a staunch supporter 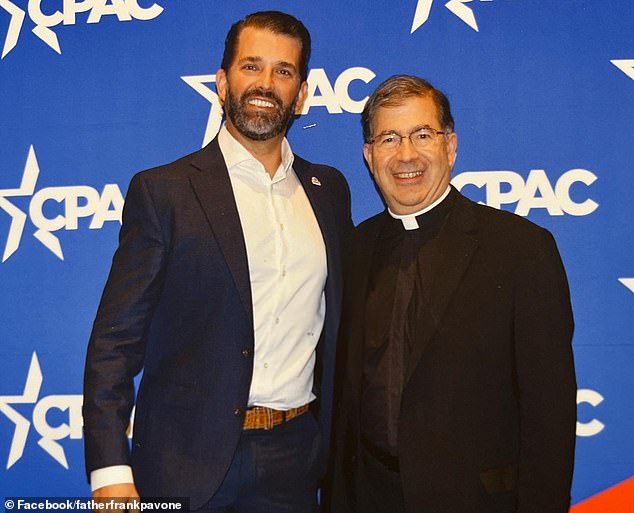 Fiercely-political Pavone has previously caused controversy with ‘lucrative’ work at an outside organization, and by placing a dead fetus on an altar in Amarillo, Texas in November 2016 – he was removed from the diocese in 2019.

In September 2020, he was accused by the diocese of having used ‘scandalous words not becoming of a Catholic priest.’

Pavone in his tweets, which the diocese issued a statement condemning, called the then-nominee Joe Biden a ‘f****** loser’ and said the Democratic party was ‘God-hating’ and ‘America-hating’.

He declared that Biden’s supporters ‘can’t say a f****** thing in support of their loser candidate without using the word Trump.’

‘What the hell do you have to say for yourselves, losers?’ Pavone asked, in the now-deleted tweets.

His Twitter biography gives his location as Florida, but it is unclear whether he still ministered to a fixed congregation.

On Saturday evening, Pavone said he was forced out for his views. 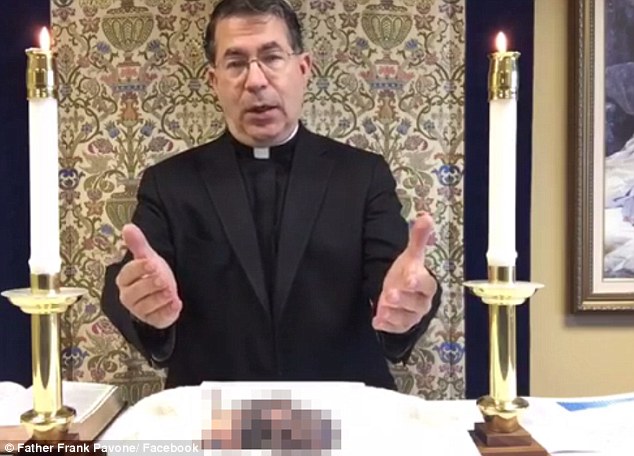 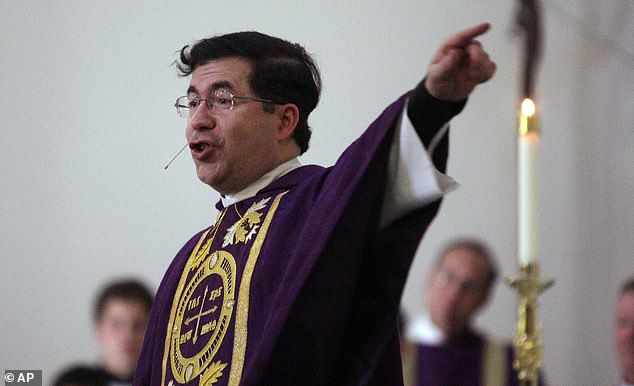 Pavone is seen in March 2009 in Naples, Florida. He relocated from New York to the diocese of Amarillo, Texas in 2005 but left in 2019 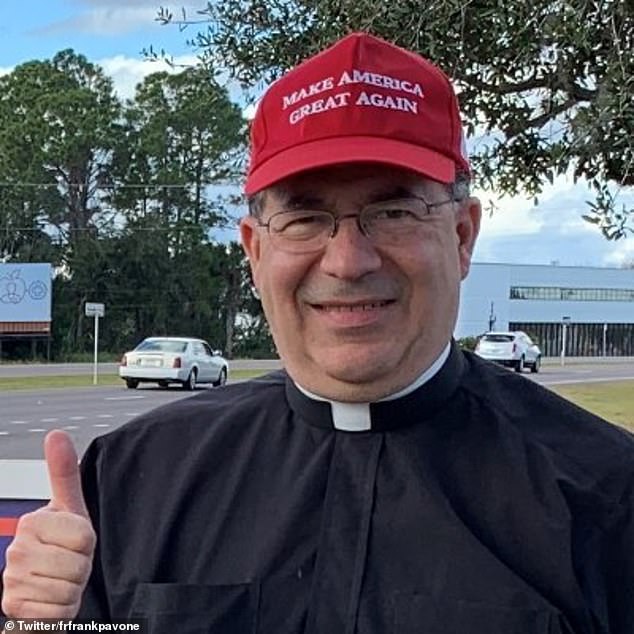 Pavone is seen in his MAGA cap. The clergy are not permitted to campaign for political candidates

‘The Biden administration comes along, and other radical whackos come along, and try to make you cooperate in the killing of babies,’ he said, dressed in a leather jacket on his YouTube set.

‘Politicians, opposed because of their pro-life stance. People shut out of their committees because they are too vocal, too conservative.

‘It happens in the Church. It’s part of the same dynamic – an effort to keep us quiet about this,’ he said, holding up a graphic diagram of an abortion.

‘Could be your employer, could be my bishop. And if you don’t shut up, ‘you’re not listening to me’.’

He added, referencing the image of the Vatican behind him: ‘Just don’t be surprised that the battle is also within the walls of that building you see behind me.’

Pavone has a long history of battling the church hierarchy. 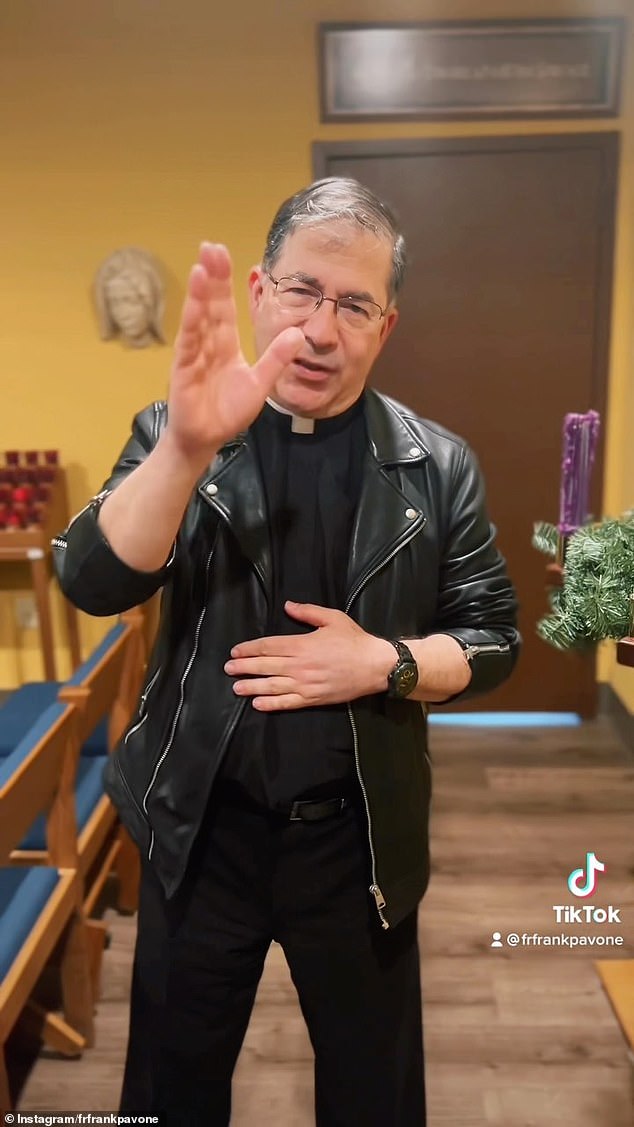 Pavone is very active on social media, and insists he will continue 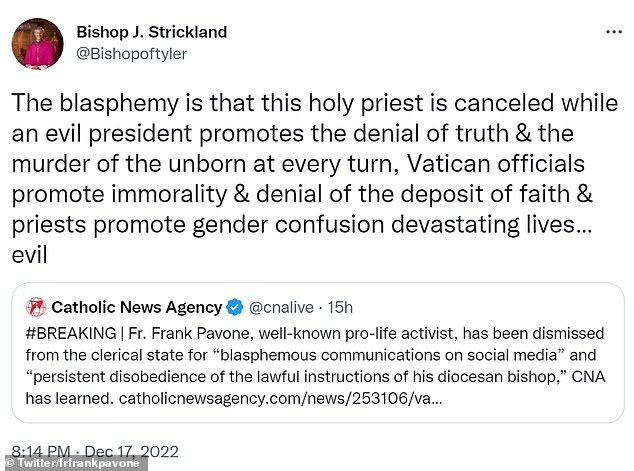 Pavone retweeted messages of support from those who shared his views

He had previously faced questions over his role with the Priests for Life (PFL) Organization, a Florida-based group of which he has been national director since 1993.

In 2012, Bishop Patrick J. Zurek wrote to bishops nationwide and said that Pavone had been suspended from public ministry outside the Diocese of Amarillo, and was ‘calling him back to the diocese to spend time in prayer and reflection.’

Zurek wrote: ‘The PFL has become a business that is quite lucrative which provides Father Pavone with financial independence from all legitimate ecclesiastical oversight.’

Zurek said he was ‘alarmed at the potential financial scandal that might arise if it were the result of my failure to correct Father Pavone’s incorrigible defiance to my legitimate authority as his bishop.’

He became a strong supporter of Donald Trump during the 2016 campaign, and organized the stunt with the fetus shortly before the election.

The video, filmed at the Priests for Life headquarters, was greeted with anger by the church.

Zurek said soon after the video’s release that he would open an investigation into the incident, calling it ‘against the dignity of human life’ and ‘a desecration of the altar.’

He added that ‘the action and presentation of Father Pavone in this video is not consistent with the beliefs of the Catholic Church.’

Pavone said the table was not an altar, and not inside a church, but admitted he should have made it clearer.

He said the fetus was given to him for burial, and he buried it after filming the clip.

‘Much of the criticism revolved around my having placed the baby on an ‘altar’ and some started getting into technical complaints about what should or should not be done with an altar,’ he said on his social media channel.

‘But to the extent that they want to get technical, so can I, and I pointed out that this was a table in our office, not a consecrated altar in a chapel.

‘That table, sometimes used for Mass, was also the place where all my videos in this educational series of election broadcasts were made.

‘In retrospect, I should have made the baby video in a different location so as to avoid any confusion to begin with.’

Pavone stepped down from the two positions with Trump’s re-election campaign in 2020 at the request of what he called ‘the competent ecclesiastical authority.’

But he continued to use his social media platforms to advocate for Trump and denounce the Democratic Party, in particular on Twitter.

He said he would hear the confession of Catholic Democrats, but could not forgive them for their ‘sin’ of voting for Biden.

‘We are trained that in the absence of repentance, absolution has to be withheld,’ Pavone said.