Research has found that metformin – used to improve the way your body handles insulin – may slow breast cancer growth and reverse treatment resistance.

Another study discovered adding aspirin to a cancer drug could make it more powerful in combating a group of tumors that are highly resistant to therapies.

These include some pancreatic, lung and colorectal cancers, as well as a small percentage of melanomas.

Together, the findings offer hope for people with certain difficult-to-treat forms of the disease.

Canadian scientists found that metformin, used to treat type 2 diabetes, reduced the rapid reproduction of tumor cells in the laboratory.

It also prevented or delayed resistance to the chemotherapy drug doxorubicin.

This meant the drug might help resistant breast cancers to start responding to treatment again, said the researchers.

Previous work has shown that metformin has an anti-proliferative effect on many kinds of cancer cell, they added.

Multiple-study analyses of diabetic cancer patients treated with metformin have hinted at the drug boosting survival and preventing new tumours. 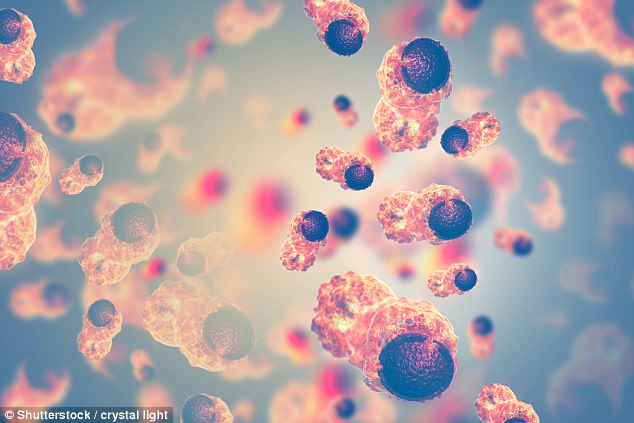 Together, the findings from the two studies offer hope for people with certain difficult-to-treat forms of the disease (stock image)

The team led by Dr Terra Arnason, from the University of Saskatchewan, wrote in the journal Public Library of Science One: ‘Our demonstration that metformin can prevent MDR development and resensitise MDR cells to chemotherapy in vitro (in the laboratory) provides important medical relevance towards metformin’s potential clinical use against MDR cancers.

‘This may be the first indication of a clinical role for metformin in the long-term management of cancer, where individuals may be maintained on oral metformin to extend remission times, or prevent drug resistance from developing.’

The drug is thought to act through a number of pathways involving histones, proteins that package DNA and also play a role in gene regulation.

WHAT ARE RAS MUTATIONS?

Cancer treatments have come a long way but some types of the disease have proven difficult to treat with targeted therapies.

Ras proteins are ‘molecular switches’ inside a cell that, when turned on, activate cell growth.

Mutations in these genes keep them in a constantly active state, driving tumour development and progression.

Mutations in the RAS gene account for more than 90 per cent of pancreatic cancers and 50 per cent of colorectal cancers.

They also cause 30 per cent of lung cancers, and a significant portion of many other types of tumours.

For more than 30 years, scientists have failed to successfully target the protein, known as Ras.

As a result, researchers have tried to attack ras proteins indirectly, via other proteins in the signaling pathways that ras proteins regulate. One such protein is MEK.

The Food and Drug Administration (FDA) recently approved one MEK inhibitor, trametinib (Mekinist), for the treatment of certain patients with advanced melanoma.

Several are also being evaluated for colon, liver cancer, thyroid and ovarian cancer.

A study by University of Queensland scientists found adding aspirin to some existing cancer drugs could increase their effectiveness against a group of tumours resistant to treatment.

They are now hoping clinical trials could soon be underway for people with lung, pancreatic and colorectal cancers and some melanomas that have not responded to other therapies.

Associate Professor Helmut Schaider said cancers driven by mutations in a group of genes, known as RAS, had a low response to treatments and that currently no drug directly targeting them.

‘We found the addition of aspirin to a cancer inhibitor drug, Sorafenib, strongly enhanced its effectiveness against mouse models of lung cancer and melanoma with RAS mutations,’ he said.

‘Our research suggests its combination with aspirin could benefit patients with RAS mutations who don’t otherwise respond to other treatments.’

Dr Schaider said the drug combination could potentially reduce the dose of Sorafenib required, improving quality of life for patients by reducing adverse impacts that can lead some patients to stop treatment.

‘By combining it with a relatively high dose of aspirin, two molecular processes are activated and together they work to kill RAS mutant cancer cells.

‘This dual activation also might prevent the tumours acquiring resistance to the treatment, which can happen when the inhibitor drug is given alone.

Dr Schaider said adverse effects of aspirin also needed to be considered, but the doses required would be most likely clinically manageable for patients who have no remaining treatment options.

He believes adding aspirin could also potentially prevent relapse of tumours in patients.

The research is published in Clinical Cancer Research.

It works by reducing the amount of glucose your liver releases into your bloodstream. It also makes your body’s cells more responsive to insulin.

It was in 1957, that the first results from a clinical trial of the drug metformin in diabetes patients were published. Yet, it would take nearly 40 years for the drug to be approved in the US as a treatment for type 2 diabetes.

Now researchers want to know whether this decades-old drug may have additional uses in another disease– cancer.

This is because some studies in people with diabetes who were assigned to take metformin were found to have a lower incidence of cancer than those taking other diabetes drugs.

Now metformin is being tested in clinical trials not only as a treatment for cancer, but as a way to prevent it in people at increased risk, including cancer survivors who have a higher risk of a second primary cancer.

Numerous early-stage clinical trials are currently under way to investigate metformin’s potential to prevent an array of cancers, including colorectal, prostate, endometrial, and breast cancer, according to the National Cancer Institute.

Aspirin is a common medicine that has a number of uses, from relieving pain and reducing swelling and a high temperature to reducing the risk of serious problems such as heart attacks and strokes.

It comes in many forms, including pills, tablets that are dissolved in water, powders and oral gels.

Some types can be bought over the counter from pharmacies, while others are only available on prescription.

A trial involving more than half a million people found long-term aspirin users cut their risk of liver and oesophageal cancer by almost half, while their odds of getting bowel cancer fell by a quarter.

Aspirin is thought to block enzymes which help cancer tumours to grow.

The cheap drug was also found to reduce people’s chances of getting leukaemia, lung and prostate cancer, although experts warn it may work less well for women and can cause ulcers and bleeding.

The study, which followed patients for 14 years, was led by the Chinese University of Hong Kong.