Diana lived in a flat in the same London mansion block as journalist Danae Brook, and agreed to speak to her – the first interview with the future princess that anyone would read.

‘Mesmerised by her periwinkle blue eyes, I could hardly believe what I was hearing as we stood talking in her hallway.

Diana is pictured outside her flat in Coleherne Court, Kensington, London, in 1980 – a year before her wedding to Charles

She said that unlike her sister Sarah, a former girlfriend of Charles, she was considered ‘suitable’ for the future king.

‘The main reason, she thought, was because she didn’t have what she called ‘a background’ – or, to put it more frankly, she hadn’t had several boyfriends.’

Here, for the first time, is the full story behind the edited version of her piece that appeared in the Daily Mail about her encounter with the young, innocent aristocrat all those years ago…

When I first met her, Diana Spencer was running up the stairs in the building we both lived in, Coleherne Court. It was 1980 and she was 19.

She was long-legged, athletic, as though she had just come off the netball field, a pretty young woman but nothing startling, apart from her eyes.

What I remember most was the eyes. Periwinkle blue. Almost as purple as Elizabeth Taylor’s in National Velvet. Mesmerising.

If she caught your eye, caught you looking at her, it was like being in the headlights of a car.

But she had no idea back then, when she was working in a children’s nursery in Pimlico, of the power of that gaze.

When I later interviewed her, this was obvious from her constant apologies.

It turned out I would be the first print journalist to interview Diana, long before the famous TV interview with Martin Bashir when she rolled her kohl-rimmed eyes, saying, ‘There are three of us in this marriage.’

She and I became neighbours at least a year before the marriage, weeks before the engagement was announced. 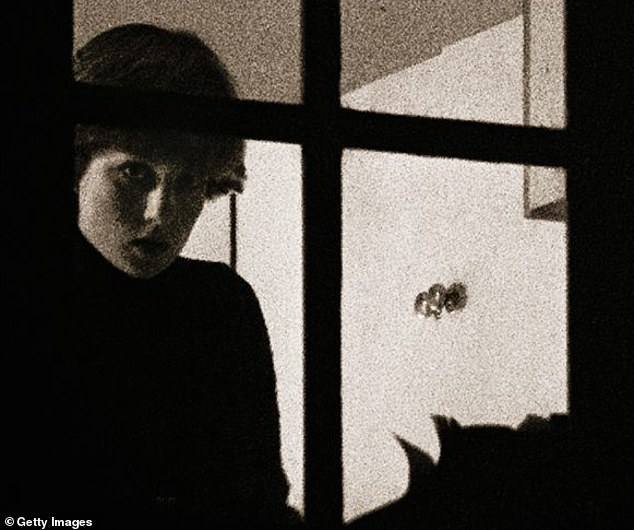 Diana spotted inside her apartment in 1981. Diana lived in a flat in the same London mansion block as journalist Danae Brook, and agreed to speak to her – the first interview with the future princess that anyone would read

She was just beginning to date the Prince of Wales, barely out of knee socks, when she came to live in Coleherne Court, an Earl’s Court Victorian mansion block.

Few people knew he was taking an interest in her. Diana-mania was a distant bubble on a far horizon.

She was an ordinary upper-class girl, coming to London from her country estate for the first time. When she moved in, her relationship with Charles was so hush-hush I had no idea there was one.

He had a reputation as a young blade about town. She had no reputation at all, as she was quick to point out when she decided to talk to me on the record.

But whispers were starting and Fleet Street diarists like Nigel Dempster were starting to pick up on the new girl in Prince Charles’s life.

Our home was one floor above hers. I raised three children there and Diana Spencer shared hers with three girlfriends.

We began to get clues as to what was going on – The Three Degrees (one of Charles’s favourite groups) were played at full blast, flowers were left outside their door. 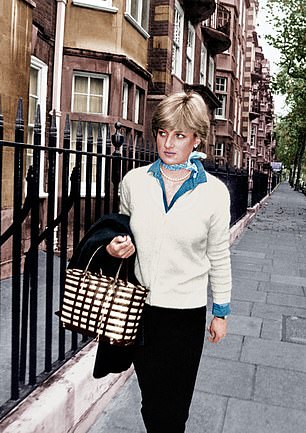 Diana outside her flat in 1981. The future-princess said she ‘didn’t have a background’ when she spoke to neighbour Danae Brook in her first ever interview

Diana was painfully shy and self-deprecating, with no self-confidence. After work she would slip into the lift carrying an orange and a Crunchie bar with the Evening Standard tucked under her arm.

She wore little make-up, and seemed to want to be invisible. ‘She likes Crunchies,’ said my youngest. ‘She got us one each!’

It turned out my two youngest, sweet, naughty boys of eight and nine, Orion and Liam, were friendly enough with her for her to buy them an occasional treat at the shop. She introduced herself to them as ‘Diana’, not even ‘Lady Diana’.

When a stunning photo of Diana, looking about 15 with the sun streaming through her skirt, appeared on the front pages announcing her presence in Prince Charles’s life, my sons saw it on the breakfast table.

‘We know her,’ they squealed. ‘She lives here. She likes oranges, we see her in Mr Barnsley’s shop.’

I was astonished. Diana was the Prince-About-Town’s new squeeze. I could not believe the shy nursery school teacher was the future wife of a future king. One week on I needed no more convincing.

Not only Diana, but the whole building was under siege. Day and night people would ring the bells madly, hoping to speak to Prince Charles’s new girlfriend.

I watched as she became more and more stressed. Every morning when she tried to jump into her red Mini, photographers would race her to the first set of traffic lights, hoping she would be stopped long enough for them to get a shot or, worse, that they would cause a little accident, which would give a more dramatic shot.

We’d sometimes go up in the lift together or walk up the road with the children and she’d tell me about her work and ask where my children would go to school next.

Nothing intimate, just neighbours getting to know each other. Then things became more immediate, more dramatic, as the roar of the motorbikes chasing her became more threatening. 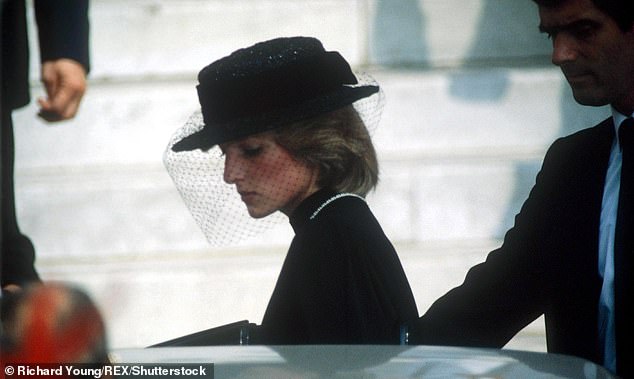 Diana is pictured attending the funeral of Princess Grace of Monaco. Several times in passing she had expressed her annoyance at being quoted when she’d not given a quote. ‘I need to say what I feel,’ she said. ‘Not what somebody else thinks I feel’

Everything was skewed by a sense of the pressure she was under. So when she became more and more upset with Charles for giving her no assistance with the Press, I wasn’t surprised when she decided she should make a statement.

She knew I wrote for a newspaper and wrote books. I left her a note explaining this when, at the urging of a trusted colleague, I asked her to consider telling the story in her own words.

Several times in passing she had expressed her annoyance at being quoted when she’d not given a quote. ‘I need to say what I feel,’ she said. ‘Not what somebody else thinks I feel.’

I offered to clear the air, to give her a voice. We agreed a time to meet and she invited me to her flat. It was teatime, November grey and raining outside.

When I pressed the doorbell, she opened the door to the flat with its elegant floor-length curtains and mahogany furniture.

We stood in the hall, where Barbour mackintoshes and wellington boots were squashed next to an umbrella stand.

It was like being in a rambling country house. She was in blue jeans and a twin-set with pearls, which she fingered constantly.

As I walked into the flat, Diana’s shoulders were bowed as though standing straight would draw too much attention. Her skin was transparent and she blushed continuously, especially when talking about Charles.

‘It’s absolutely maddening to see things written about me, and him, when I haven’t said anything.’ She paused. ‘But I don’t know what the future holds.’

I asked if anyone was advising her on how to handle the situation. ‘No!’ she said, shocked. ‘I don’t think the Royal Family is aware of what is happening here. At least we didn’t talk about it when we were in Norfolk.’

Apparently she’d crept away at night the previous weekend to stay at Sandringham, managing to evade reporters. I wondered aloud if she’d wound sheets together to climb out of the window. She laughed.

‘No, I got a very fast driver and we shot off in a puff of smoke. I had my new car delivered somewhere else where I stayed the night, then shot off to Norfolk.’ It was Prince Charles’s 32nd birthday party.

‘Unfortunately,’ she added, ‘somebody found out I had a new car and even though I parked it miles away they found it.’

So the siege went on. ‘I’ve no idea why the whole thing has built up to such a peak,’ she shrugged. ‘I think it’s because everything happens for the Royal Family in November. Princess Anne married and had a baby in November. It’s the Queen and Prince Philip’s anniversary. And of course it’s Charles’s birthday and everyone is dying for him to get married, and I was the one who was around this time.’

A little disingenuous perhaps. Not every pretty young woman is asked to stay at Sandringham for these highly personal events. 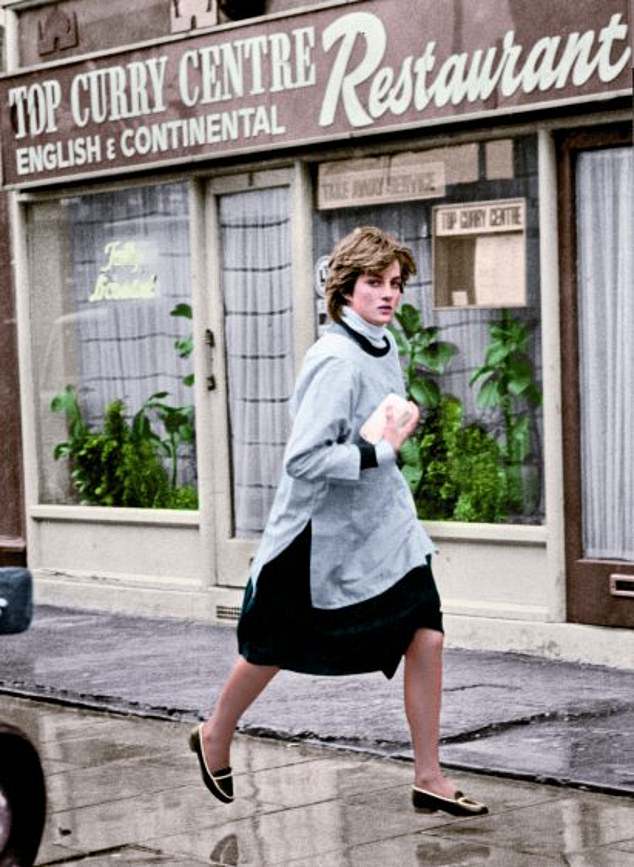 Every morning when she tried to jump into her red Mini, photographers would race her to the first set of traffic lights, hoping she would be stopped long enough for them to get a shot or, worse, that they would cause a little accident, which would give a more dramatic shot

Then she changed the subject, apologising for what a nuisance all the attention must be for other people in our building.

‘It must be so bloody for everyone who lives here,’ she said. ‘I feel so awful about it.’ I assured her we were taking it in our collective stride.

I knew she wanted me to write what she said, although she was afraid to say much. She thought she was ‘suitable’ for a future king, only because she did not ‘sleep around’.

It was clear she thought herself second best to her older sister, who had been Prince Charles’s girlfriend for almost a year but had been crossed off the eligibility list.

Not for lack of blue blood – the Spencer blood was probably bluer than the Windsors’ – but for reportedly telling journalists she’d had ‘thousands of boyfriends’.

Diana strongly implied she was a virgin, and she obviously felt that was the only reason ‘The Family’ had approved her as a future bride, although I did not write that in my interview. ‘I don’t really know why they like me,’ was what I wrote.

‘You see my sister Sarah was going out with Charles last year and she talked about it to the Press but she talked too much and they murdered her.

No, it turned out she meant a background of leaping in and out of bed with people.

‘That’s what everyone else seems to have. I mean I haven’t had a chance to have that kind of background, I’m still only 19!’ She looked shocked and embarrassed.

‘But people are longing to dig something up about me.’ She looked at me sideways. ‘It’s like the story about me meeting him on the Royal Train in the middle of the night.’

She was referring to reports, denied by the Palace, that she’d had an assignation with the prince when the train was in sidings in Wiltshire. ‘I simply couldn’t believe it,’ she exploded.

‘I’ve never been near the train, let alone in the middle of the night!’ I was told later, by a reliable source, that the woman on board was Camilla.

I was very sympathetic, but as I turned to go, realising a cup of tea was not on the cards, she apologised again for the disruption she’d caused to others in our building.

‘I am so, so sorry for interrupting the lives of the people who live here,’ she said.

She told me when she was finally allowed a bodyguard, a woman dressed in black who shadowed her like a, well, shadow, a very dark one, but effective.

I could see the top of the woman’s head as I slipped down the stairs behind Diana, neither of us waiting for the old Victorian lift.

None of the other members of the Press spotted her, that’s for sure. Diana, soon to be HRH Princess of Wales, was learning her lesson.