Diane Abbott today tore into the sexism of MPs in Parliament – but refused to condemn John McDonnell for joking about lynching a female Tory minister.

And she said Parliament still has a ‘long way to go’ before it stamps out the sexual harassment and abuse which dogs its corridors.

But she laid herself open to accusations of hypocrisy after she refused several times to condemn her shadow cabinet colleague John McDonnell after he joked about ‘lynching’ female Tory MP Esther McVey.

The left-winger told an event in 2014 how a campaign had been launched to kick Ms McVey out of her seat.

But he said activists were arguing ‘Why we are sacking her? Why aren’t we lynching the b******?’. 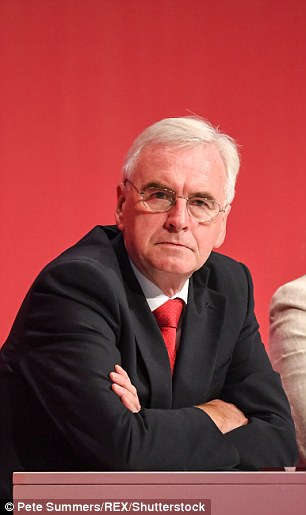 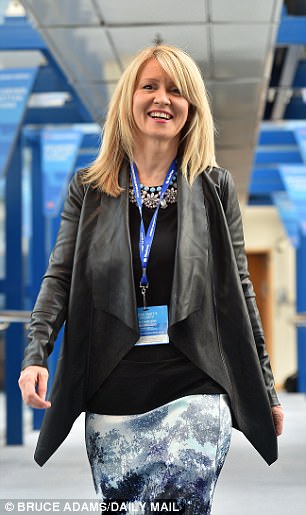 But challenged over the comments today, Ms Abbott refused to condemn them and dismissed the questions as political ‘finger pointing’.

She told the BBC’s Andrew Marr Show: ‘I wasn’t at that meeting.

‘I believe he was quoting from somebody else. But let me repeat it undermines the case against sexual abuse and sexual harassment if we try to make it a problem of a particular party or a particular faction.

Westminster should get its own sex harassment Tsar, a Labour MP has said.

John Mann said  the Harvey Weinstein scandal should be a ‘wake up call’  for Westminster as well as Hollywood.

He said parliament must create a central figure to deal with allegations of harassment and abuse.

He wrote: ‘The Harvey Weinstein scandal has been a wake-up call for everybody regarding the sexual harassment of women by men in powerful positions.

‘And it must be a wake-up call for Westminster too.

‘A number of us have been warning the parliamentary authorities for some time that the problem of male MPs who prey on young interns, secretaries, advisers and others, has been swept under the carpet for too long.’

He said the culture of secrecy must be smashed.

He said: ‘Until recently, a similar culture of secrecy existed around MPs’ expenses. It led to widespread abuse and now an independent watchdog, IPSA, monitors MPs’ expenses. If any are suspected of cheating, IPSA has the power to investigate and punish wrongdoers.

‘We need a similar system to protect staff in Parliament from sex-pest politicians.’

He added: ‘We have a duty to those who have come forward, as well as to the countless others who felt they could not. We must act now and make sure that the era of the Weinsteins of Westminster is over. For good.’

But Ms Abbott again ducked the question and told him:  ‘Sexual abuse and abuse of women has been a problem for a very long time. It is a problem for all parts of Parliament.’

She added: ‘Making this a party political thing..with respect one of the first things II said is this is not the preserve of anyone party…

‘Once you start to make it a kind of tit for tat and kind of finger pointing and factional thing actually you undercut what out to be a move forward to eliminate this kind of talk.’

Mr McDonnell has insisted he was only repeating comments made by others at the meeting.

Westminster has been rocked by claims of widespread sexual harassment by MPs towards their younger female aides.

Recalling her own experience in Parliament, Ms Abbott said: ‘If anything it was worse when I first became an MP.

‘You would have sort of micro-sexual aggression – so women would get up in the chamber and Tories opposite would do this gesture like they were weighing their breasts.

‘There was harassment, there were jokes which weren’t that funny – it was partly to do with the fact it was a very male environment – 650 MPs, when I went there just 20-odd women.

Labour has been hit by particular scandal this week after one its MPs Jared O’ Mara was exposed for posting a string of sexist, racist and homophobic comments online.

The party eventually  suspended him form the party on Wednesday – 48  hours after the first allegations publicly surfaced. 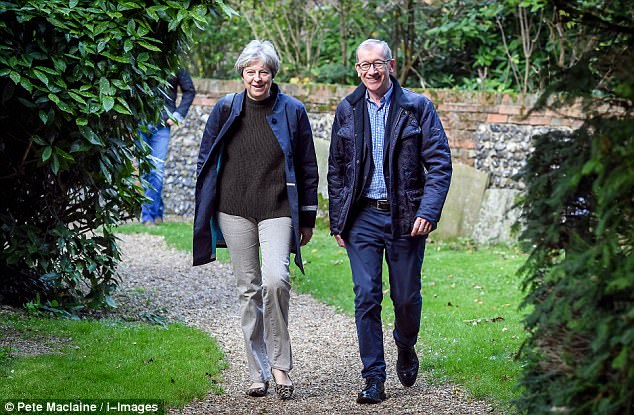 Theresa May and Philip Hammond , pictured heading to church today. The PM has written to John Bercow to ask for his advice on how to tackle sexual harassment in Parliament

But the party has faced criticism amid reports it was sent a dossier of some of the offensive remarks a month ago.

Quizzed over whether Mr O’Mara is likely to stay in the Labour Party, she said:  ‘I cant judge because I’ve not seen the evidence, but w hat i would say is that language and that tone is unacceptable. The party has moved on.

‘When you have that sort of language….it demeans all women.’

She also hit out at Michael Gove for joking that being interviewed by BBC presenter John Humphrys to ‘going into Harvey Weinstein’s bedroom’.

Ms Abbott said: ‘I didn’t think it was funny. Particularly in Parliament making sexual harassment a joke is one of the reasons why it has not been dealt with.

‘We have got to realise is undermining and it is demeaning of women and and it undermines and demeans the institution.’