‘I know what I’m doing, so maybe people should listen’: Dianne Feinstein scolds schoolchildren who demand she vote for AOC’s Green New Deal

Senator Dianne Feinstein is drawing criticism for snapping at a group of schoolchildren who demanded that she vote ‘yes’ on the Green New Deal – but her supporters defend her for engaging with them on the subject.

A group of about 20 middle and high school students organized by Sunrise Movement confronted the California Democrat in her San Francisco offices on Friday.

The children pleaded with the senator to sign the Green New Deal resolution championed by freshman congresswoman Alexandria Ocasio-Cortez, telling Feinstein that they had heard from ‘scientists’ that the earth only has 12 years before cataclysm.

‘You know what’s interesting about this group? I’ve been doing this for 30 years. I know what I’m doing,’ Feinstein replied.

‘You come in here, and you say it has to be my way or the highway. I don’t respond to that,’ she continued.

‘I’ve gotten elected, I just ran. I was elected by almost a million vote plurality. And I know what I’m doing. So you know, maybe people should listen a little bit.’ 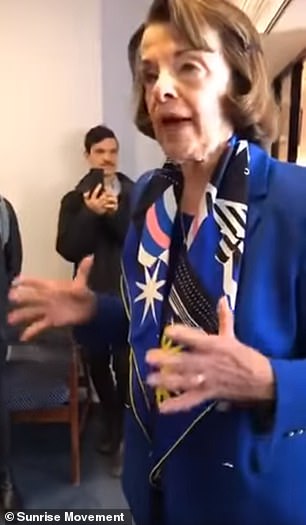 After a group of schoolchildren (left) confronted Senator Dianne Feinstein on Friday, she was accused of ‘smugness’ and ‘disrespect’ in her response

Sunrise Movement accused Feinstein of responding to the children with ‘smugness’ and ‘disrespect.’

But the senator’s supporters point to the full version of the video, in which Feinstein says she might vote in favor of Ocasio-Cortez’s resolution, which offers an ambitious and costly master-plan for environmental, economic, and social transformation.

Feinstein goes on to explain that she has drafted her own resolution, which she says will have both a meaningful impact and a chance of passing in the Republican-controlled Senate.

At the end of the roughly 14-minute exchange, one of the high school students asked how she could apply for an internship in Feinstein’s office, and the senator offered her one on the spot.

LIVE: We’re inside Senator Dianne Feinstein’s San Francisco office with 15 middle and high schoolers asking her to stand with our generation and support AOC and Sen. Ed Markey’s #GreenNewDeal resolution. Watch her condescending response, share with your friends, and CALL her office at (415) 393-0707 to ask her to support the Green New Deal! 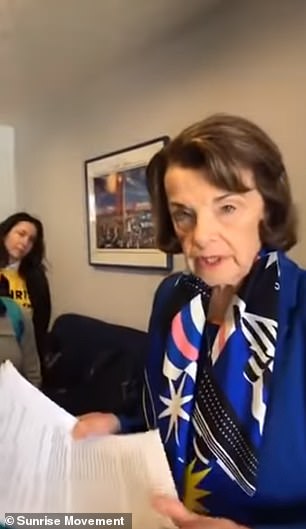 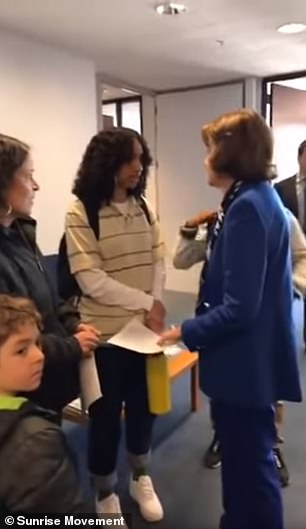 Feinstein defended her interaction with the students in a statement issued later on Friday.

‘Unfortunately, It was a brief meeting but I want the children to known they were heard loud and clear. I have been and remain committed to doing everything I can to enact real, meaningful climate change legislation,’ Feinstein said.

‘We had a spirited discussion and I presented the group with my draft resolution that provides specific responses to the climate change crisis, which I plan to introduce soon.

‘I always welcome the opportunity to hear from Californians who feel passionately about this issue and it remains a top priority of mine,’ she continued.