Did Aaron Hernandez show effects of CTE BEFORE the NFL?

Tests on Aaron Hernandez’s brain show he had CTE, a football-linked disease which causes aggression and suicidal thoughts

The revelation on Thursday that former New England Patriots star Aaron Hernandez was suffering from advanced stages of a degenerative brain disease found in other football players at the time he committed suicide in jail is the latest dramatic twist in a tragic saga.

It also raises questions as to whether Hernandez’s diagnosis of a severe form of chronic traumatic encephalopathy can be traced back to his youth.

According to a study by Boston University researchers, football players who began playing before the age of 12 were more likely to exhibit cognitive and behavioral problems later in life.

Hernandez’s diagnoses led his family to file suit against the NFL and the Patriots, accusing them of failing to protect players from head trauma.

The family is alleging that the NFL bears responsibility for Hernandez’s suicide, though the lawsuit does not link CTE with his murder conviction.

Hernandez, however, played just 38 career games in the NFL.

The Boston University study about youth football and its results were published in Nature’s Translational Psychiatry, a noted medical journal, according to The New York Times.

It found that football players who participated in youth football before 12 years of age were twice as likely to fall victim to ‘problems with behavioral regulation, apathy and executive function.’

They were also three times more likely to suffer from ‘clinically elevated depression.’

‘The brain is going through this incredible time of growth between the years of 10 and 12, and if you subject that developing brain to repetitive head impacts, it may cause problems later in life,’ Robert Stern, one of the authors of the study, said.

The findings are consistent with other studies conducted of retired NFL players.

Those who started playing after the age of 12 were less likely to exhibit diminished cognitive abilities.

There is a growing number of scientists who believe that playing tackle football is not advised for young children, particularly between the ages of 10 and 12, since those are critical years in the brain’s development. 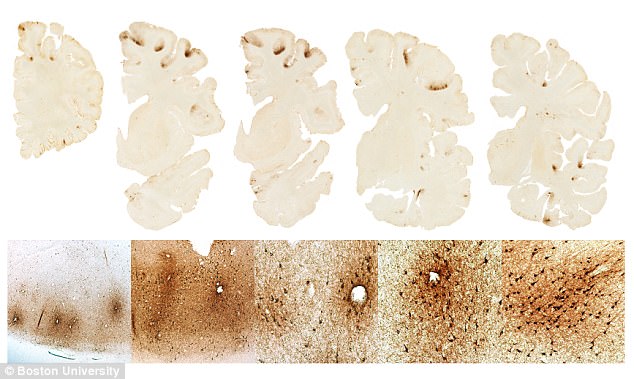 Boston University researchers have been spearheading the scientific inquiry into the links between blows to the head suffered by football players and degenerative brain disease.

It was BU researchers who also confirmed Hernandez’s diagnosis.

Hernandez was a rising star in the National Football League when he was arrested in 2013 and charged with murdering an acquaintance.

He was convicted of that killing but was acquitted earlier this year of gunning down two men outside a Boston nightclub in 2012. Days later, he hanged himself in a Massachusetts prison.

His death so soon after a legal win stunned fans and his family, who asked that the brain of the 27-year-old former athlete be tested for CTE, which is linked to the sort of repeated head traumas common in football and can lead to aggression and dementia. 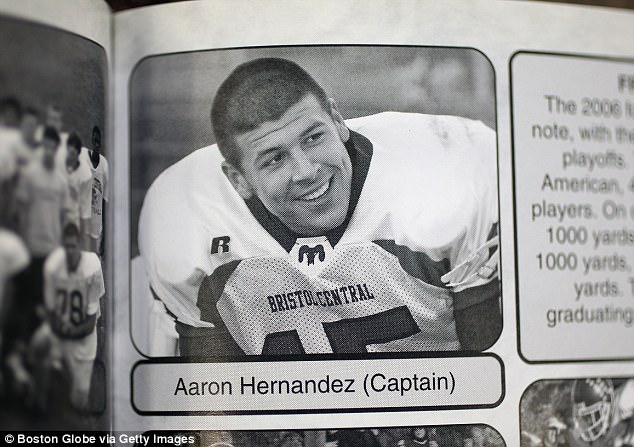 It is worth noting that Hernandez began his football career at around age six, though it was Pop Warner football, which is non-contact. He is seen above in his high school yearbook photo during a game for Bristol Central High School in Connecticut 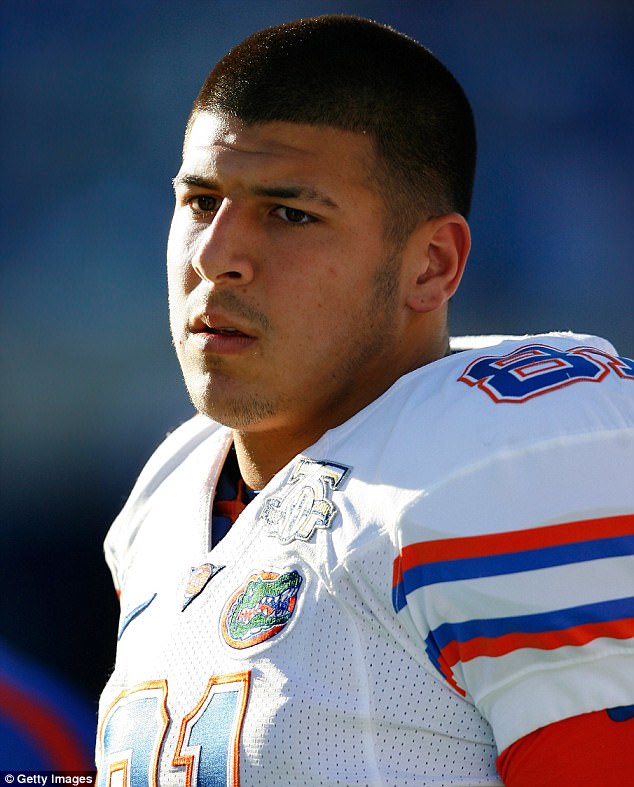 Hernandez played three season for the Florida Gators before turning professional. While at college, he had run-ins with the law 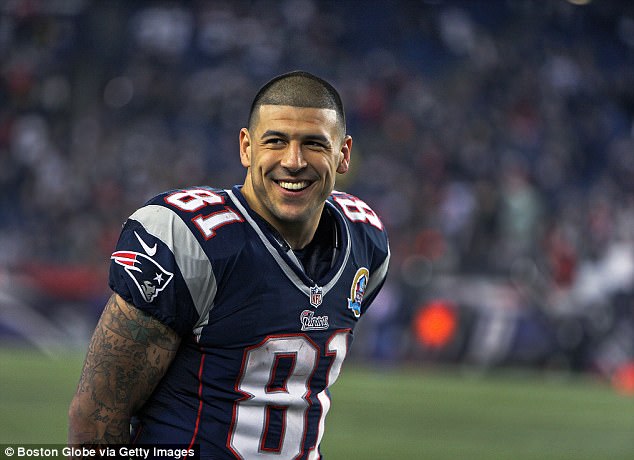 Hernandez (seen above as an adult with the Patriots) also suffered a childhood trauma with the sudden and unexpected loss of his father, Dennis, who died during routine hernia surgery

It is also known that Hernandez played football from the age of six.

It is worth noting that Hernandez began his football career at around that age, though it was Pop Warner football, which is non-contact, according to ESPN.

Hernandez also suffered a childhood trauma with the sudden and unexpected loss of his father, Dennis, who died during routine hernia surgery.

It cannot be definitively stated that Hernandez suffered blows to the head before the age of 12. 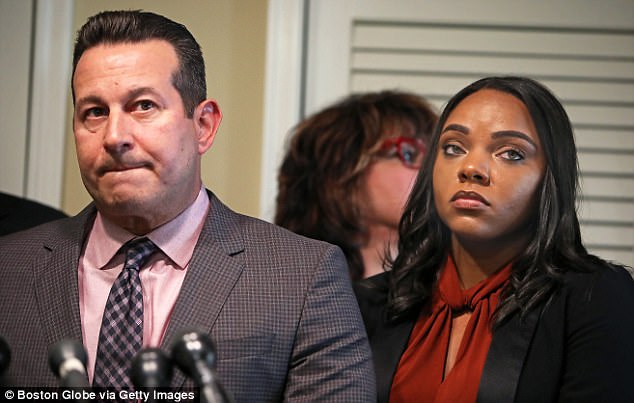 Attorney Jose Baez (left) announcing the lawsuit which will be filed against the National Football League and the New England Patriots on behalf of Aaron Hernandez’s family. Officially, it will be on behalf of his daughter Avielle, with his fiancee Shayanna Jenkins (right)

Nonetheless, his behavior even before joining the Patriots in the NFL may have presented red flags.

When he was a 17-year-old student at the University of Florida in Gainesville, Hernandez punched a bar employee on the side of his head, rupturing his eardrum.

That same year in 2007, Hernandez was questioned about a drive-by shooting after one of the men in a car told police that the perpetrator matched his description.

He was never charged after refusing to speak to police.

Hernandez had a $41 million NFL contract when he was arrested at his home in June 2013 and charged with murder.

He was convicted of that killing in 2015.

A judge this year vacated that conviction, because Hernandez had not exhausted all his avenues of appeal by the time he died, a move allowed by a quirk in Massachusetts law.