A group of British academics who were cited by Russia to accuse humanitarian organisations in Syria of staging war crimes has sparked ‘serious concern’ among diplomats.

The Working Group on Syria, Propaganda and Media (WGSPM) were praised as ‘recognised experts and reputable scientists’ at the United Nations Security Council by a senior Russian official last week who cited their work while claiming an alleged chemical weapons attack in 2018 did not take place.

Another Russian official tweeted a link to the group’s work that accused the humanitarian White Helmets group of being ‘actively involved’ in killing civilians to frame the Syrian government.

The group have been accused of ‘whitewashing war crimes’ and ‘unwittingly and naively acting as agents of propaganda for the Russians, or actively support[ing] Russian disinformation’, Huffington Post reported, citing a ‘European diplomat’.

Roughly 40 people were said to have been killed in a chemical weapons strike in Douma in April 2018 – and the WGSPM sought to prove it was staged by the White Helmets in order to justify missile strikes against Bashar al-Assad’s Syrian government.

The Organisation for the Prohibition of Chemical Weapons (OPCW) concluded that a chemical attack did occur, with a report finding that chlorine gas was released from two canisters dropped from the air.

The unnamed European diplomat told HuffPost UK: ‘There is wide and serious concern about the extent to which academics in the WGSPM appear to be pursuing issues which so closely overlay with Russian lies and propaganda, particularly on the use of chemical weapons in Syria.

‘Russia appears to be using these academics to amplify and bolster their own disinformation, particularly to undermine the OPCW and divert attention from their own activities.

‘It is unclear whether these academics are unwittingly and naively acting as agents of propaganda for the Russians – or they actively support Russian misinformation.

‘Either way, it is difficult to see how their involvement with WGSPM is compatible with having any official role in academia.’

Piers Robinson, who used to teach at Sheffield University but left last year following reports he supported 9/11 conspiracy theories, established the group in 2017.

Robinson said that his decision to leave had been based on professional goals and personal circumstances, and he had not been criticised or pressured to leave by the university due to his research or public statements.

Last week he tweeted: ‘It is indeed very likely the victims at Douma were murdered captives. As such a potential warcrime and one that is being covered up by @opcw management, western governments and most of the mainstream media. But the truth is coming out.’ 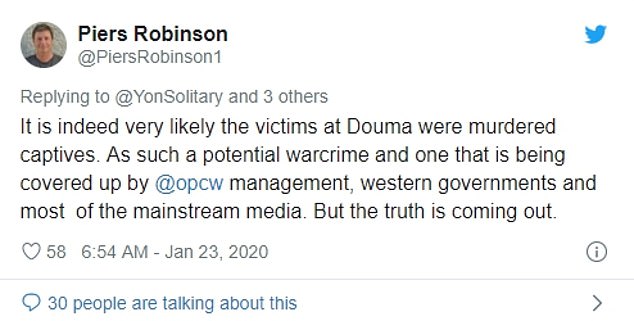 Piers Robinson tweeted: ‘It is indeed very likely the victims at Douma were murdered captives. As such a potential warcrime and one that is being covered up by @opcw management, western governments and most of the mainstream media. But the truth is coming out’ 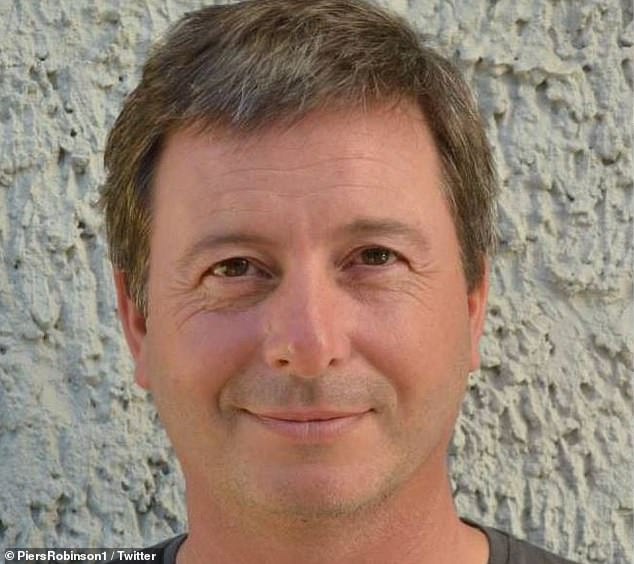 Robinson, who used to teach at Sheffield University but left last year following reports he supported 9/11 conspiracy theories, established the WGSPM in 2017

Brookings Institute senior fellow Shadi Hamid said the academics in the group did not know enough about the Middle East to discern what and is not real, blasting their scepticism as ‘bonkers’.

The WGSPM have published papers suggesting western governments were responsible for the Skripal poisoning.

Eliot Higgins from Belingcat said the theory that the Douma attack was staged by the White Helmets does not have evidence to support it, calling the academics ‘useful idiots’.

The WGSPM argue that in a separate attack in 2017 Syrian jets could not have carried out the strike due to its location, suggesting that the White Helmets had been involved in ‘managing a massacre’. 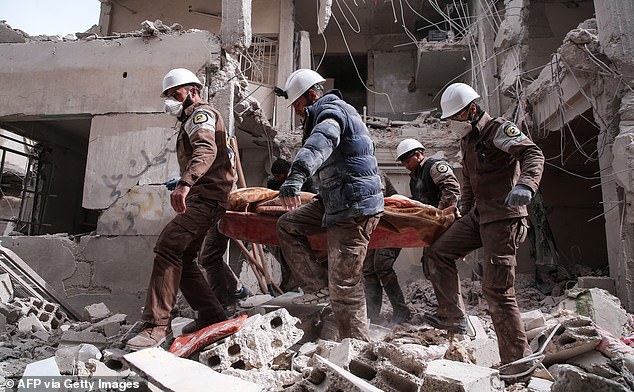 White Helmets search for survivors following reported government airstrike on the rebel-held neighbourhood of Tishrin, on the northeastern outskirts of Damascus, on February 22, 2017

But in December last year Peter Hitchens revealed in the Mail on Sunday that the global chemical weapons watchdog faced renewed questions after fresh details emerged about how it suppressed the findings of its own inspectors who raised serious doubts about the Douma incident.

The paper reported that a senior official at the Organisation for Prohibition of Chemical Weapons (OPCW) demanded the ‘removal of all traces’ of a document which undermined claims that gas cylinders had been dropped from the air – a key element of the ‘evidence’ that the Syrian regime was responsible.

Unconfirmed reports and videos showing the bodies of adults and children foaming at the mouth in Douma, a rebel-held Damascus suburb, shocked the world in April 2018, and a week later, without waiting for proof that chemical weapons had been used, Britain, France and the US launched a retaliatory missile strike, the biggest Western military action of the eight-year war.

It was reported that it was only after the blitz that a team of OPCW inspectors – non-political scientists – were able to visit Douma to investigate the attack, later detailing their conclusions in a report.

Earlier last year The Mail on Sunday revealed details of a leaked email – whose authenticity has since been verified by the OPCW – which protested that the scientists’ original interim report had been censored to change its meaning.

Fernando Arias, Director-General of the OPCW, insisted that he stands by ‘the independent, professional conclusions’ of the organisation’s final report which was released in March. 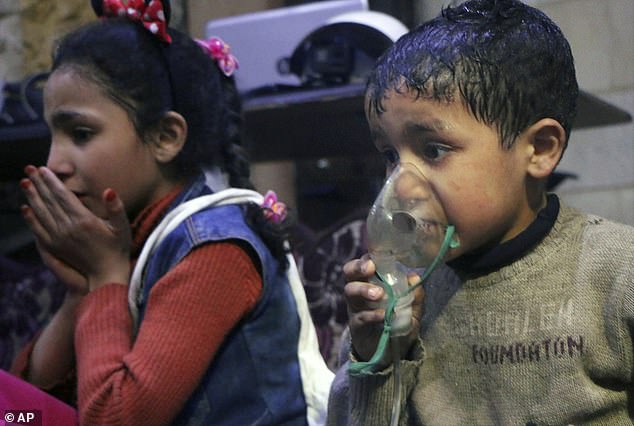 But the newspaper obtained the team’s original, uncensored interim report which differs sharply from all later versions, including the March document.

That final report claimed there were ‘reasonable grounds’ that chlorine gas was used in Douma, but an OPCW whistleblower said only tiny quantities of chlorine were detected in forms possible to find in any household.

The original interim report also mentioned for the first time doubts about the origin of the cylinders, saying: ‘The FFM [Fact-Finding Mission] team is unable to provide satisfactory explanations for the relatively moderate damage to the cylinders allegedly dropped from an unknown height, compared to the destruction caused to the rebar-reinforced roofs.

‘In the case of Location 4 [one of two sites where a cylinder was found], how the cylinder ended up on the bed, given the point at which it allegedly penetrated the room, remains unclear.’

The report called for further studies to clarify the point.