Did Jeremy Hunt really ask a victim of female

I cannot resist asking the Health Secretary about an extraordinary account of his meeting with Nimco Ali, a victim of female genital mutilation (FGM), writes Simon Walters.

Somali-born Ms Ali, who is now a campaigner against the barbaric practice, met Mr Hunt at his Whitehall office to discuss the issue. She said Mr Hunt’s first question was: ‘What I really want to know is, can girls like you have an orgasm?’ She said she replied: ‘Well, it depends how good you are Jeremy because 80 per cent of the clitoris is internal, but let’s move on.’ 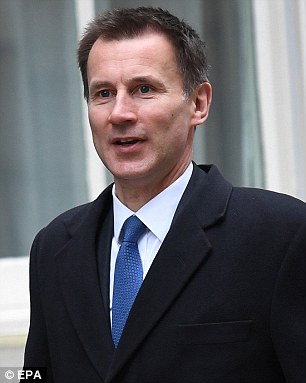 Somali-born Ms Ali,left, who is now a campaigner against the barbaric practice said she was asked by Mr. Hunt whether she was able to have orgasms

So did he really ask such an intimate question? Seeing the warning lights flashing, Mr Hunt offers me a perfect gentleman’s response: ‘All I will say is that she’s an amazing lady and we’ve made incredible progress on FGM thanks to her.’

Hmm… sounds like he did say it, though perhaps in not such a Harvey Weinstein way. Which is as you might expect from a former Charterhouse head boy.