Did Murdoch lure Comcast to overpay for £30bn Sky?

When Comcast’s highly paid bankers emerged from their bunker in Mayfair after their triumph in the epic bidding war for Sky, they looked more shell-shocked than elated.

Few passers-by would have read in their faces that they had just pulled off the deal of a lifetime.

The exhausted Comcast crew had not only just posted a £30 billion offer for Sky, £17.28p a share – they had also yanked one of Britain’s biggest companies from the grasp of Rupert Murdoch, who founded the business almost three decades ago.

Comcast posted a £30 billion offer for Sky, £17.28p a share – they also yanked one of Britain’s biggest companies from the grasp of Rupert Murdoch

Celebrations in swanky restaurants followed once the victors had regained their composure. Bonuses that most would regard as life-changing were assured. But the mood was a little ambiguous.

Comcast had won with a knockout bid. Its final offer for the FTSE 100 firm had raised eyebrows – almost £3 billion higher than Murdoch’s 21st Century Fox, which still owned 39 per cent of Sky. Had Comcast’s crack team, led by the highly rated Sir Simon Robey, been seduced into overpaying?

‘Yes,’ is the blunt response from one experienced investment banker who has previously dealt with Murdoch whose stake is now owned by Disney – in which his family owns 7 per cent of the shares.

‘They [the Murdochs] would never admit it but it’s the natural thing to do if you are sitting on both sides of the trade,’ he said.

In the days leading up to last weekend’s nail-biting climax, Fox’s offer for Sky had stood at £14 a share and Comcast’s at £14.75. The Takeover Panel had declared a final auction – finishing with sealed bids from both sides.

The rivals and their advisers – bankers, lawyers and publicists – were on tenterhooks. There was significant margin for error. Philip Apostolides, Robey Warshaw co-founder, was tasked with sending in their bids to the panel. 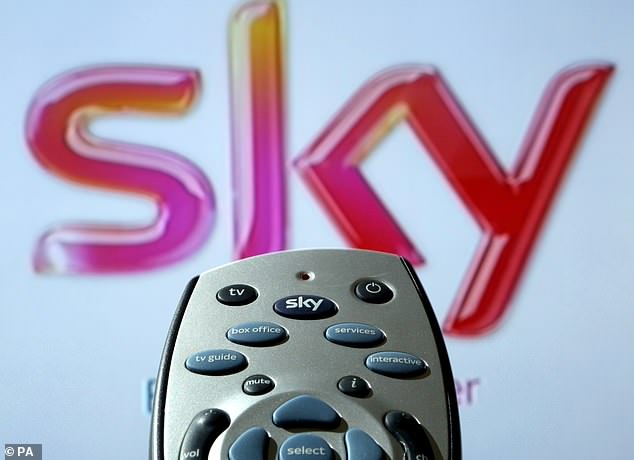 The first-round bids made at midday on Saturday have not been disclosed. But Alice Enders, an analyst at media consultancy Enders, told The Mail on Sunday rumours indicated Fox’s first bid that day was pitched at £14.25, which hardly signalled a desperation to win.

‘The rumour is that then Comcast countered with £15 a share,’ she said. It would later emerge that Fox’s ‘best and final’ offer in the sealed bids round of the auction at 7pm was pitched at £15.67 – below even the Friday’s market close of £15.85.

The investment banking source said: ‘I think they (the Murdochs) will have been delighted with the end result. The final offer from Fox, which was below Sky’s closing price, shows they clearly weren’t that fussed if they lost the sealed bids auction process.’

Indeed, Murdoch, 87, hardly emerges as a loser even if he has finally lost his grip on his prized Sky. Last December, he struck a deal to sell the majority of Fox to the Walt Disney Company for $71 billion, including Fox’s 39 per cent stake in Sky. As part of that deal, the Murdoch family trust will end up with a stake of around 7 per cent in Disney, whose market value stands at $173 billion.

Disney had initially seemed keen to get its hands on what it called a ‘strategic’ asset. But Enders said: ‘The decision on the final bid would have been dictated by Disney. Once Disney struck a deal to buy Fox in December it made it really clear it was calling the shots. Rupert Murdoch was out of the picture.’

‘The fact that the Fox final offer was below the market close shows Disney didn’t really want the business as much as Comcast. It was a bid to make a bid,’ she concludes.

Fuelling speculation that Murdoch’s hands were tied, only days before the auction, US news channel CNBC, owned by Comcast, said: ‘Comcast suspects Disney may have long ago concluded it’s willing to give up on Sky’.

So why then did Comcast submit a final offer almost 10 per cent higher than Fox? One banker – whose firm was advising one of the hedge funds that together were thought to have controlled as much as 20 per cent of Sky – said Comcast had to deliver a message to investors holding out for a higher price with ‘a knockout blow’. Otherwise it would have been harder to reach a conclusion.

‘Comcast needed hedge funds to think Fox would tender its shares in order to sell into the offer,’ he said.

So everyone wins. Or do they? The question is whether the eye-watering price will need to be paid for through a better service, more customers, or just higher subscription charges. No doubt Sky customers will be the first to find out.