Did plastic tortilla chip package really float in the Atlantic for FORTY YEARS before washing up?

Mystery of the Doritos bag: Did plastic tortilla chip package really float in the Atlantic for FORTY YEARS before washing up on a North Carolina beach still boasting its bright branding?

Nature lovers are struggling with the mystery of a 40-year-old Doritos bag that supposedly washed up on a North Carolina beach last week.

Cape Lookout National Seashore shared images of the packet claiming volunteers cleaning up a beach discovered the item after decades of floating around in the Atlantic Ocean without much deterioration.

However some their approximately 25,000 followers were skeptical of the find, mentioning that the details on the packaging were far too vibrant to have really survived that long in the saltwater and sun. 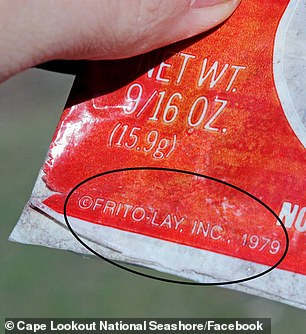 Cape Lookout National Seashore shared images of a Doritos bag found last week that they believe to be from 40 years ago. Social media users were skeptical the item could have been floating around in the Atlantic Ocean without much deterioration after sun and water exposure

‘Wayback Wednesday – This bag was found last week on the sound beach along the Soundside nature trail on Harkers Island along with other storm debris during a trail cleanup,’ the caption read.

‘The bag design looked ‘odd’ to us, but we couldn’t put our finger on why until we noticed the date in the lower corner – 1979! While this was sort of a neat find due to its age, it serves as a reminder that plastic trash lasts a long time, in this case almost 40 years!’

Displaying a vintage logo and a date of incorporation from almost 40 years ago, some commenters pointed out that while the design is indeed old, it could simply be a case of the older logo being used on fresh bags of the tortilla chips.

Social media users requested to see the list of ingredients on the back of the bag to compare it to the ones used nowadays.

The finders – who now keep the bag framed in their office – shared it but a commented noted nutritional label standards were only passed as a law in 1990 so the brand would have been ahead of standards for their time.

Websites such as Amazon currently sell the Frito-Lay brand’s older looking bag, prompting followers to ask for a sell by date. 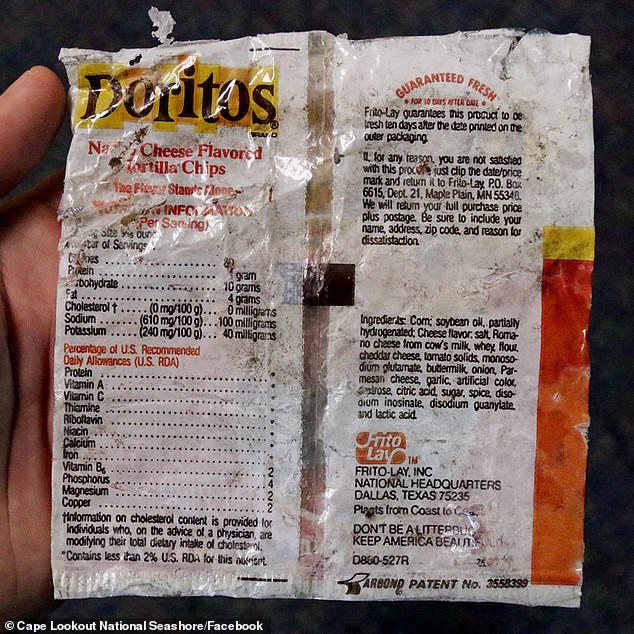 More than 1,000 interacted with the post. Some commenters confirmed the orange, yellow and brown colors survived so well because it could be a newer Doritos bag.

‘I’m thinking that the design is from 1979, but it’s a new bag. Those bags are everywhere right now as a ‘throwback’ promotion,’ one Facebook user wrote.

However the throwback bags are for the taco flavor, the one found was a nacho cheese packet.

There’s also a chance the bag came from a country with varying marketing updates.

When one skeptical social media user asked whether Cape Lookout National Seashore fabricated the story, they said they received confirmation from the makers that it was not one from part of their throwback marketing.

The page creators replied: ‘No, we did not fabricate the story. We did find this bag along the nature trail. We checked with Frito-Lay corporate office and they confirmed that this is an original bag not a part of their current throwback marketing.’ 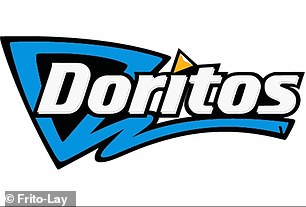 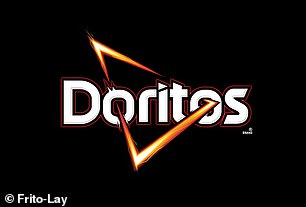 But an eagle-eyed snack fan claimed the Frito-Lay logo is what gives away that it’s a newer bag. It features a logo used from 1987 to 1997, then again in throwback marketing from 2017 – making it no older than 31.

Regardless of whether the bag was 40 years old, it was a strong message for those who care about the environment and provided a talking point for keeping public areas clean.

‘The point is we must stop the plastic,’ read one comment.

But a Facebook user defended those using North Carolina beaches, pointing out: ‘Most of the trash that appears on the Outer Banks comes out of the ocean from currants and storms so sad but we have to deal with it, very little is created by visitors, Mother Nature will cleanup is on backyard.’