Diesel fumes harm children while they are in the womb!

Diesel fumes start to harm children while they are still in the womb, research suggests.

Pregnant women exposed to sooty particles in exhaust emissions are more likely to have babies with damaged DNA, scientists found.

They said babies exposed to pollution in the womb had a greater ‘biological age’ as soon as they were born.

Blood samples taken from the placenta and umbilical cord at birth showed signs of damage to the chromosomes, a problem thought to be linked to shorter life expectancy.

The researchers, from Hasselt University in Belgium, found that exposure to pollution in the second trimester – between the fourth and sixth months of pregnancy when the foetus grows rapidly – had the biggest impact on the baby.

The UK is notoriously bad at controlling air pollution, with 37 British cities persistently displaying ‘illegal’ levels of air pollution – which has seen the Government repeatedly hauled into court.

Pregnant women exposed to sooty particles in exhaust emissions are more likely to have babies with damaged DNA, scientists found

A report published by the European Environment Agency estimated more than 52,240 premature deaths are caused by air pollution each year in Britain, one in 11 of all deaths.

Of these, 37,600 deaths are attributed to tiny polluting particles known as PM2.5, which are particularly a problem in the emissions of diesel cars, and which are so microscopic they are inhaled deep into our lungs.

But the new research suggests even this figure may be an underestimate.

The team, whose work is published in the medical journal JAMA Pediatrics, tracked 641 pregnant women in Belgium between February 2010 and December 2014.

They examined their exposure to PM2.5 pollution, by comparing their home address to air monitoring data.

When each child was born, they took blood samples from the placenta and umbilical cord.

The scientists examined the babies’ telomeres, the tiny caps found on the ends of DNA strands often compared to the plastic tips of shoelaces, which protect chromosomes from deterioration.

Babies whose mothers had been exposed to more pollution had shorter, more frayed telomeres, which scientists say is a good estimate of ‘biological age’.

THE DANGERS OF AIR POLLUTION

Short and long term exposure to the particles increase the likelihood of respiratory and cardiovascular disease.

Children exposed to the pollutants are more likely to grow up with reduced lung function and to develop asthma.

While the UK legal limit for PM2.5 is an annual average concentration of 25 micrograms per metre cubed, WHO guideline limits are lower at 10 micrograms.

There is thought to be no safe threshold below which there are no adverse effects.

The longer the telomeres, the greater the ‘buffer’ someone has against ill health, researchers say.

What did the study find?

Exposure in the second trimester seemed to be the most important, with babies whose mothers had lived in polluted areas in these three months alone showing a 9.4 per cent reduction in cord telomeres, with much smaller impacts in the first and third trimesters.

The researchers wrote: ‘To our knowledge, this study is the first to report an association between prenatal exposure to PM2.5 air pollution and telomere length at birth, both in cord blood and placental tissue.

‘We theorize that biological aging is associated with PM2.5 air pollution exposure, even before birth, which may underlie potential adverse health consequences later in life.’

The researchers think air pollution cause this damage when they are inhaled by creating ‘free radicals’ – unstable molecules that damage to DNA, kill cells and raise the risk of cardiovascular disease.

The rise of diesel cars

Diesel cars have been promoted since the 1970s as an environmentally-friendly choice because they emit less carbon dioxide, the greenhouse gas which causes global warming. 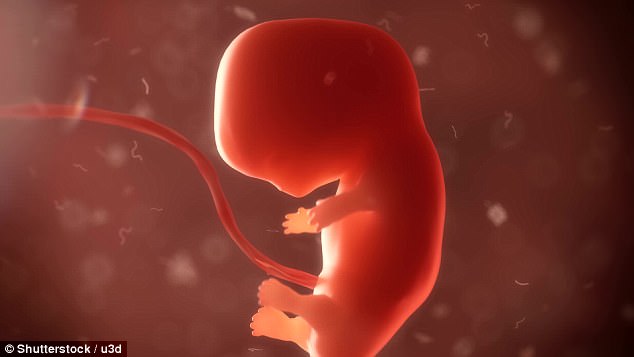 Blood samples taken from the placenta and umbilical cord at birth showed signs of damage to the chromosomes, a problem thought to be linked to shorter life expectancy

The tactic – which aimed to help Britain hit EU carbon emissions targets – contributed to the number of diesel drivers in Britain jumping from around 1.5million a decade ago to about 11million today.

But in recent years scientists have realised that diesel also produces more of the tiny particles and nitrogen oxides that are damaging to human health.

Medical experts are increasingly aware of the impact of diesel on human health, including the risk of asthma and heart disease, but this is the strongest evidence so far that it can impact children before they are even born.

‘The authors explore a potential underlying mechanism by measuring changes in telomere length in placenta and cord blood.

‘Further research is needed to determine whether these changes impact on infant health and development and to understand whether there is a ‘critical window’ during pregnancy when environmental exposures have the most detrimental effects.’