Diet tweaks to help you lose a POUND in a week

About to start a strict diet? Then think again — because, according to the latest research, crash diets just don’t work.

They are so hard to stick to that people tend to lose their willpower and end up regaining any weight lost, U.S. researchers reported in the journal Obesity this week.

So, what does this mean for the quarter of the UK population now classified as obese and the further third who fall into the overweight category, many of whom are searching for the magic bullet that will help them slim?

Having monitored the outcome of 183 dieters over two years, the scientists at Drexel University, Philadelphia, who were behind this week’s study, concluded that it’s the slowly but surely approach, losing a pound a week, that brings the greatest results.

And to achieve that, it seems that making mini tweaks, rather than major alterations, to your diet brings the greatest success.

The idea behind this approach is that weight is typically gained by consistently eating just a few more calories than we burn, and so making small sustainable changes is the best way to get the pounds off again.

A 2012 study conducted by Cornell University in the U.S. and published in the Journal of Medical Internet Research, found those who were coached in making small easy changes to eating habits (such as keeping kitchen counter tops free of tempting food) for 25 days or more per month, reported an average monthly weight loss of 2lb.

Here, we show how you can lose a pound in seven days with 28 easy changes you can do over the course of a week. Added up they save a total of more than 3,500 calories, which is the estimated deficit you need to lose a pound, no matter what you weigh.

If your weakness is shop-bought coffees, then try swapping from a calorific latte to a more forgiving skinny cappuccino. These contain more coffee, and less milk than lattes, and making the switch to a lower-fat milk — the skinny is made with skimmed milk, not semi-skimmed as standard lattes are — lowers calories, too.

There are 143 calories in a standard latte with semi-skimmed milk, compared to 70 in a standard skinny cappuccino. Do the swap for just three days a week and you save over 200 calories.

Start buying medium sliced bread rather than thick sliced — the medium sliced has 16 to 24 fewer calories per slice. If you use four slices, the amount in two sandwiches, over a week you’ll cut around 80 calories. For a bigger saving, swap a standard 800g loaf for a 400g one (the slices are a little smaller). 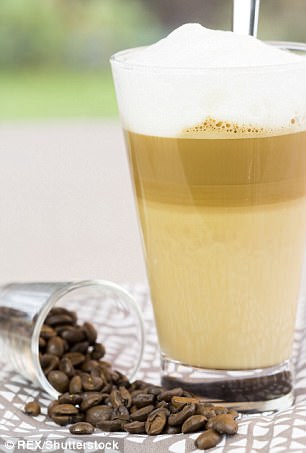 If your weakness is shop-bought coffees, then try swapping a calorific latte (like this Latte Macchiato) for a skinny cappuccino

SAVE 80 CALORIES (at least)

Both count as one of your five-a-day and are a source of the antioxidants anthocyanin, linked with a lower risk of heart disease and better cognitive function. But the blackberries are lower in natural fruit sugars, making them lower calorie, too.

Move treats brought into the office out of reach, because if you have to get up to reach them you’ll eat less.

In a U.S. experiment published in the journal Appetite in 2002, office workers consumed 125 fewer calories in chocolate during the day when it was placed 6ft away rather than in easy reach.

Repeat this exercise whenever food gets brought into the office — if that’s twice a week you’ll cut out a lot of calories.

Can’t say no to your mid-afternoon biscuit craving? Rather than diving in for two chocolate digestives, opt for two Jaffa cakes instead.

Jaffa cakes are smaller and lower in fat and contain only 46 calories each, versus 83 calories in each chocolate biscuit.

Use 30g Parmesan shavings (124 calories) instead of 60g Cheddar (248 calories) in a sandwich or salad. Parmesan is stronger flavoured so you don’t need so much of it.

It’s also a more concentrated source of calcium, so you won’t miss out by eating less — 30g parmesan still has 39 per cent of the daily recommended intake of the mineral (60g Cheddar has 55 per cent). You’ll also halve your saturated fat intake by making this swap too (13g versus 5.8g) 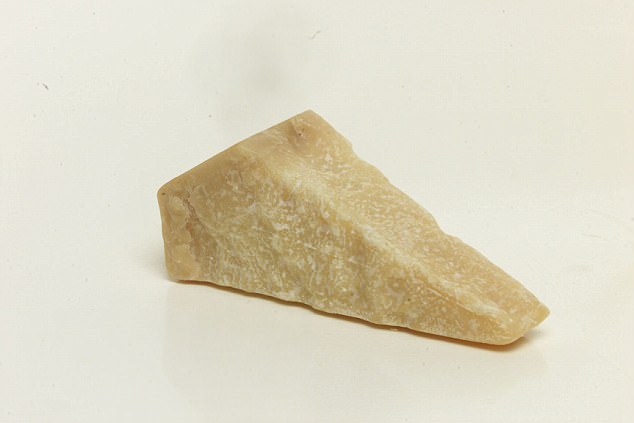 Use 30g Parmesan shavings (124 calories) instead of 60g Cheddar (248 calories) in a sandwich or salad. Parmesan is stronger flavoured so you don’t need so much of it

Rather than using a tablespoon of mayonnaise (108 calories), why not moisten your sandwich with a teaspoon of mild wholegrain mustard instead.

The mustard is only 12 per cent fat and you need to use less of it, as it has more flavour. Mayonnaise is mostly vegetable oil, and so is almost 80 per cent fat.

Substitute a quarter of the minced beef in your bolognaise, chilli or lasagne for chopped mushrooms (in a recipe for four use 375g mince and 125g mushrooms instead of 500g mince).

Texture-wise, mushrooms are a good meat replacement and you’ll cut out 2g of saturated fat (10 per cent of your daily limit) per serving as well as helping your waistline.

Weigh your cereal so you know what a standard 40g portion (containing on average 140 calories) looks like.

Small cereals such as oats fit together more snugly, so you tend to pour yourself more if you judge the serving by eye alone, says Dr Barbara Rolls, a food and fullness expert at Pennsylvania State University.

In a study published in the Journal of the Academy of Nutrition and Dietetics in 2014, Dr Rolls found that volunteers poured themselves 72 more calories per bowl on average of small flake cereal (for example, oat-based) than they did of bran flakes when they judged by eye.

Even if you do this one day a week, it will help. 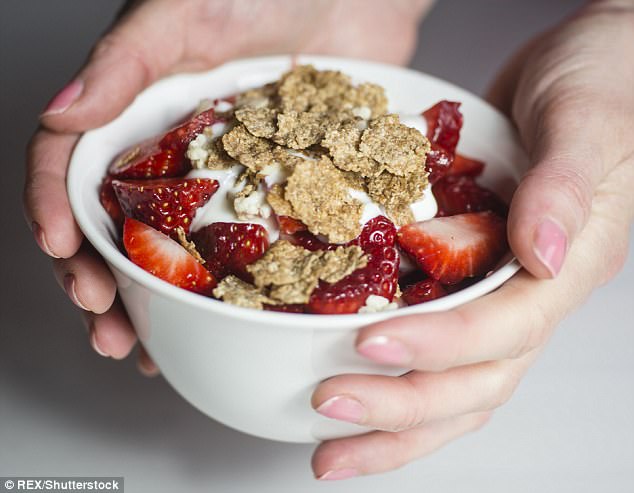 Rather than having fish in breadcrumbs (for example, Sainsbury’s breaded haddock fillets), go for fish in seasoned flour (Sainsbury’s Lightly Dusted Haddock).

As well as having fewer calories in the form of flour and oil, the dusted haddock is slightly higher in protein as the piece of fish is a bit bigger.

Get into the habit of buying one per cent fat milk — it’s less watery than skimmed (which is 0 per cent fat) — but has 50 fewer calories and 2.3g less saturated fat per pint than popular semi-skimmed. However, it contains just as much calcium.

Swap a portion of rice for cauliflower ‘rice’. Vegetable alternatives to staple carbohydrates are now available in most supermarkets. A 150g portion of Sainsbury’s Cauliflower rice, which also counts as one of your five-a-day, has 47 calories in a 150g serving, compared with 180 calories in boiled rice.

Downsize your breakfast fruit juice from 250ml (a large tumbler full) to 150ml (a small tumbler full) but to make it look bigger, use a tall thin glass.

It still counts as a fruit portion and provides nearly two-thirds of your daily requirement of vitamin C. Do this once a week and you’ll cut calories and two teaspoons of sugar.

Switch from butter to olive oil spread. If you only do this every day on a couple of lightly spread slices of bread, over the course of the week it will cut almost 200 calories and over 23g of saturated fat, more than a day’s limit (20g).

Savings are greater if you go for a reduced fat version (493 calories and 42g saturated fat saved).

Eat a large salad before a meal. A study at Pennsylvania State University found that people who ate a 100 calorie undressed salad as a starter, went on to eat 667 calories during the main course, while those who didn’t averaged 875 calories at their main course, meaning the salad eaters had a lower consumption overall.

The fibre and fluid from the salad make your stomach feel full. Using 100g cucumber, 40g watercress, a whole red pepper and seven cherry tomatoes would be 100 calories.

Drop a plate size. People pile 25 to 35 per cent extra food on to bigger plates, says Brian Wansink, a professor of consumer behaviour at Cornell University. He says that’s because our brain tells us we should pile our plates to look full.

Select a plate no more than 25cm wide — a small dinner or dessert plate — instead of your usual 30cm, a modern dinner plate size.

Do it twice a week. 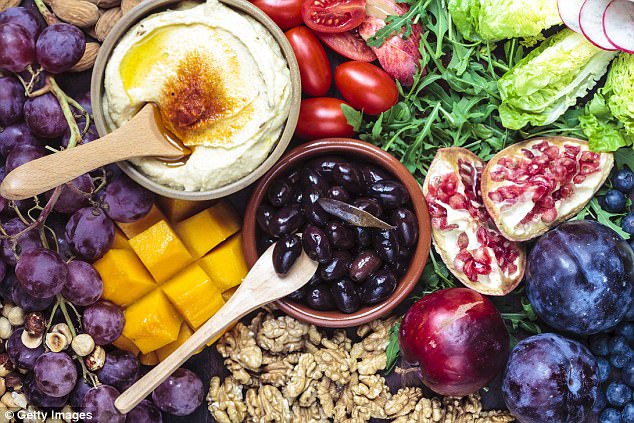 Eat a large salad before a meal. People who eat salad as a starter tend to consume less calories across their whole meal, research has said

Change your end of week celebration drinks from three 175ml glasses of wine to three gin and diet tonic drinks (or have rum and diet cola or whisky and soda), using 25ml of spirit per drink.

As well as cutting calories you’ll be halving your alcohol intake from over six units to around three. Three units is a ‘safe’ amount to have in one day if you don’t have more than 14 units in one week.

Six units in one go is considered a binge.

Instead of chicken tikka masala and pilau rice, order tandoori chicken with boiled rice. The tandoori option comes without a creamy sauce and boiled rice is less calorific than pilau, which is fried with spices before it’s boiled.

Blend a few peeled and steamed slices of courgette with avocado — at a ratio of 25 per cent courgette to 75 per cent avocado — to make a lower-calorie version of guacamole.

It will save around 45 calories per 100g portion but still provides cholesterol-lowering polyunsaturated fats and the antioxidant vitamin E, which protects against cell damage.

Use cucumber or pepper sticks rather than a 20g handful of kettle or tortilla chips to dunk into your favourite dip. A 5cm piece of cucumber, or half a pepper cut into crudites, counts as one of your five-a-day and both are virtually fat, sugar and salt-free. Tortilla chips are fried and contain around 100 calories per 20g.

When tucking into a portion of chicken wings, leave the bones of each one on your plate as you eat the rest.

In an experiment by Cornell University, this tactic led people to eat 34 per cent less, than those who had cleared the debris away.

Looking at the evidence of how many you’ve eaten acts as a consumption brake. Typically there are six roasted wings (452 calories) in a serving, — but this could cut the amount eaten to four (301 calories).

The vintage version contains more alcohol (around four units versus less than three units), as it’s brewed for longer, which contributes to its higher calorie intake. 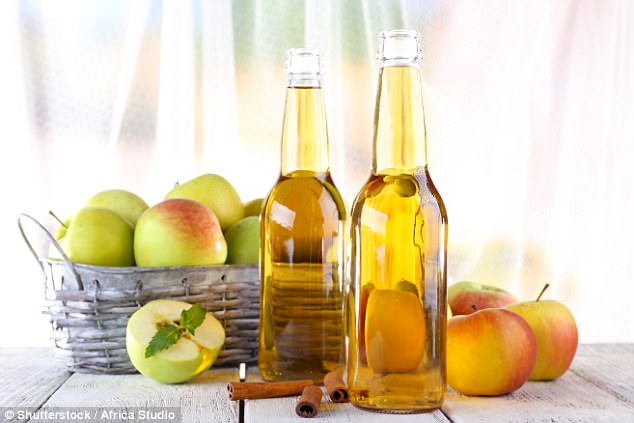 Goodbye crème brulee, hello crème caramel. If you like both desserts, do your waistline and arteries a favour by opting for the latter, which contains less cream and sugar (but more milk).

The crème caramel has 17g sugar, whereas there is 20g in the brulee.

The single cream will seem just as indulgent to your taste buds, but this simple swap will help your waistline and cut out over 5.5g of cholesterol-raising saturated fat — that’s more than 25 per cent of the recommended daily intake.

The serving of pork also has 50 per cent less saturated fat — 3.8g — less than a fifth of the total recommended in a day. 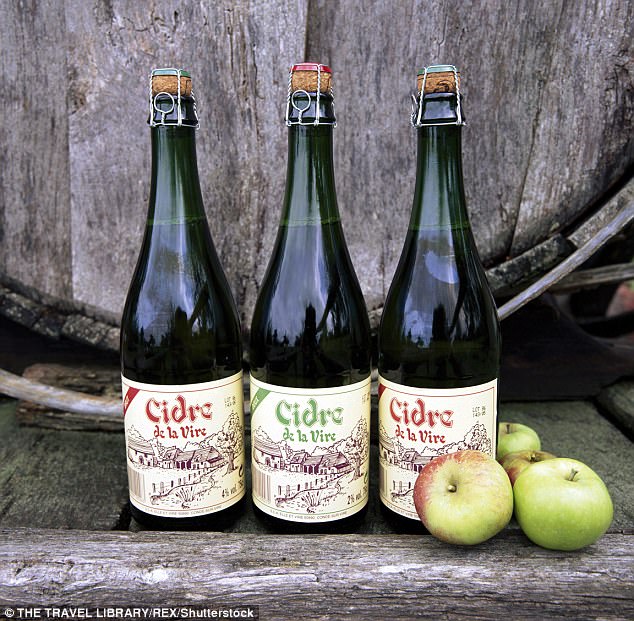 Vintage ciders contain more alcohol (around four units versus less than three units), as it’s brewed for longer, which contributes to its higher calorie intake

When a recipe calls for one sweet potato, use 300g butternut squash (a third of a squash) instead.

They are interchangeable in soups and roasted vegetable dishes and are rich in vitamin A, important for the immune system, each providing at least 75 per cent of the daily requirement in one serving.