Dinosaurs WERE wiped out by asteroid 66m years ago, dust found in a crater confirms

Asteroid dust found beneath an impact crater confirms a leading theory that it was a space rock that killed the dinosaurs and 75% of life on Earth 66 million years ago.

Researchers from the University of Texas at Austin studied 900 metres of rock core samples from below the seafloor under the Chicxulub crater in the Gulf of Mexico.

They found evidence of asteroid dust within the samples, a discovery the team say is the ‘final proof’ dinosaurs were wiped out by a city sized space rock.

This brings to an end counter arguments by other researchers who claim a catastrophe of that type would have also wiped out frogs, Texas researchers said.

This brings to an end counter arguments by other researchers who claim a catastrophe of that type would have also wiped out frogs, Texas researchers said

IRIDIUM: RARE IN THE EARTH’S CRUST BUT PLENTIFUL IN SOME ASTEROIDS

Finding proof that an asteroid killed the dinosaurs saw a team of researchers dig deep beneath a crater in the Gulf of Mexico.

They found asteroid dust – ad the telltale sign it was from space, rather than Earth is the element iridium.

This element is rare in the Earth’s crust, but present at elevated levels in certain types of asteroids.

An iridium spike in the geologic layer found all over the world is how the asteroid hypothesis was born.

In the new study, researchers found a similar spike in a section of rock pulled from the crater.

In the crater, the sediment layer deposited in the days to years after the strike is so thick that scientists were able to precisely date the dust to a mere two decades after impact.

In 2016 an international team mounted an exhibition to gather samples from the 150km diameter crater, which is underneath the Yucatán Peninsula in Mexico.

After analysing the chemical makeup of the rock sample, they realised there was a large amount of the element iridium – rare in the planet crust but present in elevated levels in some asteroids – there was a spike in sediments from the time of the impact.

The layer deposited in the days to years after the strike is so thick the researchers were able to precisely date the dust to a mere two decades afterwards.

Co-author Prof Sean Gulick, University of Texas, said: ‘We are now at the level of coincidence that geologically doesn’t happen without causation.’

Levels of iridium that are 30 times greater than average have been found in the ‘Cretaceous/Tertiary (KT) boundary, the authors of the study explained.

This is the layer of sedimentary rock laid down at the time of the dinosaur extinction – this is how the asteroid theory first came about, as iridium was also found int he geologic layer around the world.

Prof Gulick said: ‘It puts to bed any doubts the iridium anomaly in the geologic layer is not related to the Chicxulub crater.’

The dust is all that remains of the 11km wide asteroid that slammed into the planet wiping out 75% of life – including all non-avian dinosaurs, plants and animals.

It’s estimated the dust kicked up by the impact circulated in the atmosphere for no more than a couple of decades – which helps time how long the extinction took.

Prof Gulick said: ‘If you’re actually going to put a clock on extinction 66 million years ago, you could easily make an argument it all happened within a couple of decades – which is basically how long it takes for everything to starve to death.’

The highest concentrations of iridium were found within a 5cm section of the rock core retrieved from the top of the crater’s ‘peak ring’ – the mountains left behind from the impact that formed when rocks rebounded and collapsed from force.

Prof Goderis said: ‘We combined the results from four independent laboratories around the world to make sure we got this right.’

In addition to iridium, the crater section showed elevated levels of other elements associated with asteroid material, the study authors said. 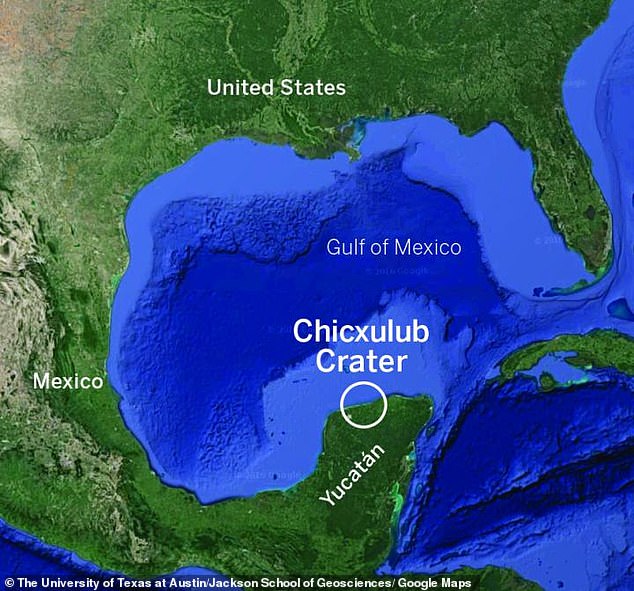 Their concentration and composition resembled measurements taken from the geologic layer at 52 sites across the globe, further adding to proof that the layer was created by the 11km wide asteroid 66 million years ago.

The core section and geologic layer also have earthbound elements in common – including sulfurous compounds.

Two years ago a study found sulfur-bearing rocks are missing from much of the rest of the core – despite being present in large volumes in the surrounding limestone.

This indicates the impact blew the original sulfur into the atmosphere – making a bad situation worse by exacerbating global cooling and seeding acid rain. 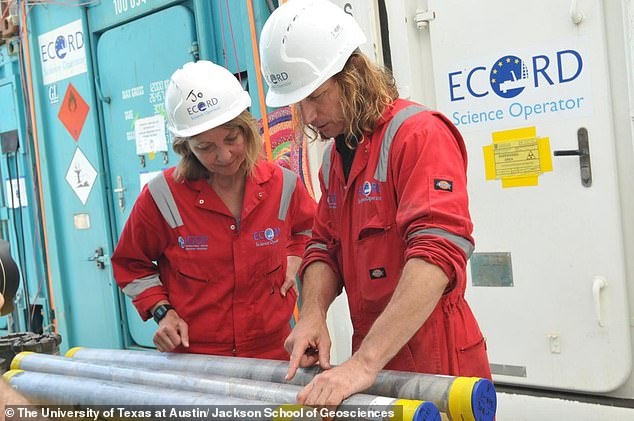 Sean Gulick, a research professor at The University of Texas at Austin Jackson School of Geosciences (right), and Joanna Morgan, a professor at Imperial College London, examining cores retrieved from the crater during the 2016 research mission

The ‘age of the dinosaurs’ being ended by an asteroid rather than a series of volcanic eruptions or some other calamity has been the leading idea since the 1980s.

SPACE ROCKS: FROM ASTEROIDS AND COMETS TO METEORS

It painted an apocalyptic picture of dust from the vaporised asteroid and rocks it hit circling the planet – this would have blocked the sun, bringing mass death.

It then drifted back to Earth to form the layer enriched in asteroid material that’s visible today in the geologic layer from the time period – worldwide.

In the 1990s, the idea was strengthened with the discovery of the Chicxulub crater. Stretching 150km wide and 20km deep, it’s the same age as the rock layer.

The latest study identifies asteroid dust with a matching chemical fingerprint at the precise geological location that marks the time of the extinction.

Dinosaurs were the most successful animals to have roamed the planet. For over 170 million years they dominated the land.

They ranged from small creatures just a few feet long to the largest animals that ever walked Earth.

Another recent study found that the earliest primate ancestors lived alongside dinosaurs for a short time, but thrived when they left by adapting to feast on insects and fruit under the tree layer.

The researchers, whose findings were published in the journal Scientific Reports, say the discovery ‘seals the deal’ for the asteroid hypothesis.

Their International Ocean Discovery Programme mission has helped fill in gaps about the impact, the aftermath – and the recovery of life.