Christian Dior hosted a live but audience-free fashion show on Wednesday in the Italian city of Lecce, in a dazzling celebration of local crafts and traditions that included a dance spectacle in the middle of the baroque main square.

Luxury labels are tentatively returning to the catwalk after the coronavirus pandemic, and Dior streamed the show live without the usual array of celebrities in the front row.

The show, which was postponed from May 27, took place in the the Piazza del Duomo in Lecce, Puglia, with a small audience of 1,000, consisting of artisans, press and fashion executives, watching from the venue.

According to Vogue Business, the brand hopes the show tonight will attract more than 20 million  social media users, far more than it has ever done whilst also showing a physical show.

Dior hosted it’s Cruise 2020 show tonight after it was postponed from May 27, with the fashion runway taking place in the the Piazza del Duomo in Lecce, Puglia

But the French brand upped the ante by staging an extravanga with a live orchestra and dancers performing a modern take on a traditional tune, while models wound their way through a gallery of lights called Luminarie in Lecce’s Piazza del Duomo.

Outfits in the so-called ‘Cruise’ collection included embroidered dresses with firework patterns, in a nod to Italian folklore, while artist Pietro Ruffo’s wildflower drawings were translated onto colourful dresses.

Dior’s Italian creative chief Maria Grazia Chiuri said she had sought to showcase the craftmanship of the Puglia region – her father’s homeland – and help it endure by casting it in a fresh light. 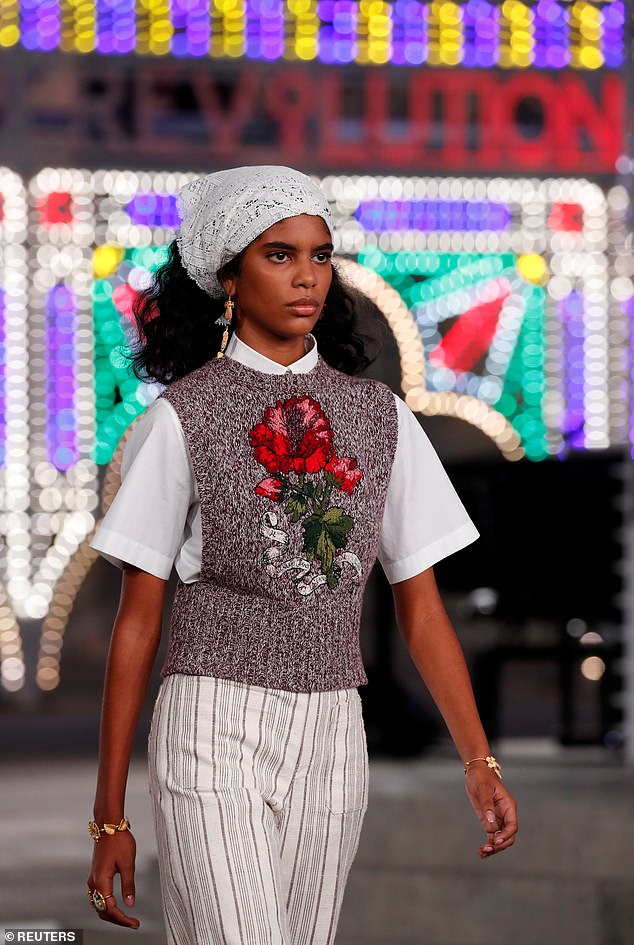 Dior tonight presented its Cruise 2021 collection, made up of 90 holiday-ready looks, to an empty venue in Italy with hopes that up to 20 million may watch the show from home

‘I understood in this process where my passion and my origins are from and why I am so attracted to this type of work, this embroidery, this tradition,’ Chiuri told Reuters in an interview.

‘I saw my grandmother, my aunts, women used to sit outside their homes and create this beautiful work.’

LVMH-owned Dior called on the Costantine Foundation, a center involved in self-assertion of women, to manufacture cloth like macramÃ© and lace in natural color, handcrafted with old looms in the Italian countryside.

One ivory dress, bejeweled with dozens of butterflies and roses in bobbin lace, was handmade by one of the few woman still able to master the old lacemaking technique. 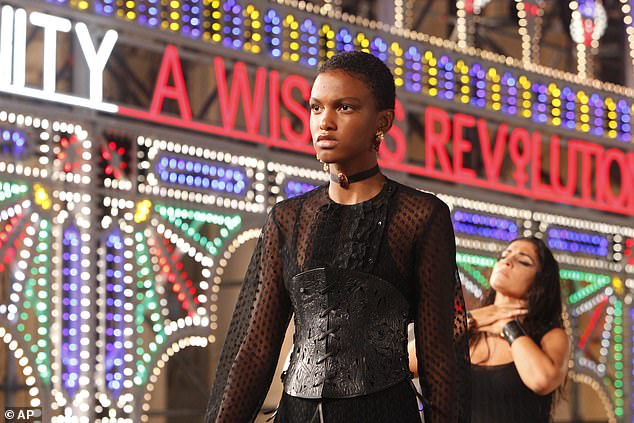 Models Ana Barbosa wears a creation during the unveiling of the Dior 2021 cruise collection in Lecce, southern Italy 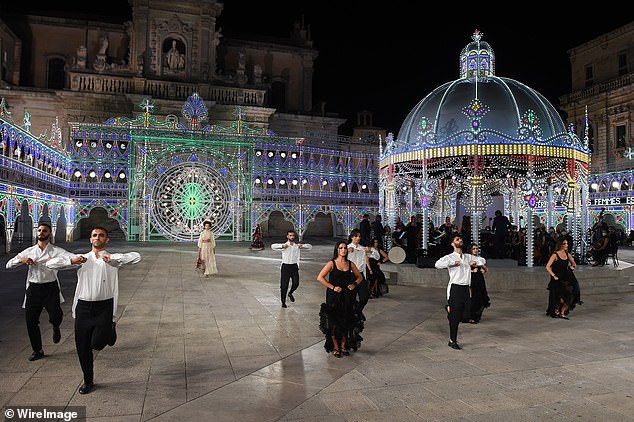 Dior hosted just 1,000 spectators at the venue, with the models and performers maintaining social distancing throughout the show

Other looks featured shearling jackets, tie-dye prints or a black tulle dress sewn with ears of wheat in raffia.

Many fashion houses including Gucci, Marc Jacobs and Saint Laurent have chosen to forgo their 2021 cruise collection, breaking away from the fashion calendar as we know it to show when they are ready.

Dior is one of the only fashion houses to have held such a large scale catwalk, others to have returned to showing on physical catwalks in Paris and Milan this week include Jacquemus and Dolce & Gabbana.

Models strutted their stuff through a brightly lit Piazza del Duomo, and could be seen maintaining a social distance from one another as they posed within the square. 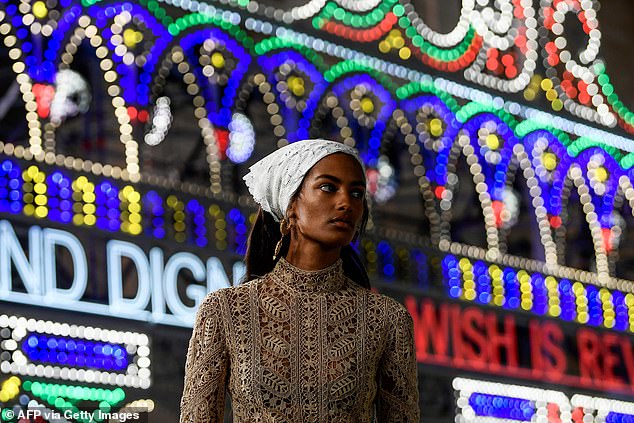 Dior’s show tonight was aiming to attract 20 million social media views, far more than it has ever done whilst also showing a physical show

Meanwhile there will also be further clips shared across social media platforms like TikTok, plus Weibo and WeChat in China.

Speaking to Vogue Pietro Beccari, Chairman and CEO of Christian Dior Couture said the show had been designed with ’20 million people at home’ in mind.

He explained: ‘If you ask yourself why you invest so much money and time in your show it is for those watching at home and not really for the 1,000 lucky ones there.’ 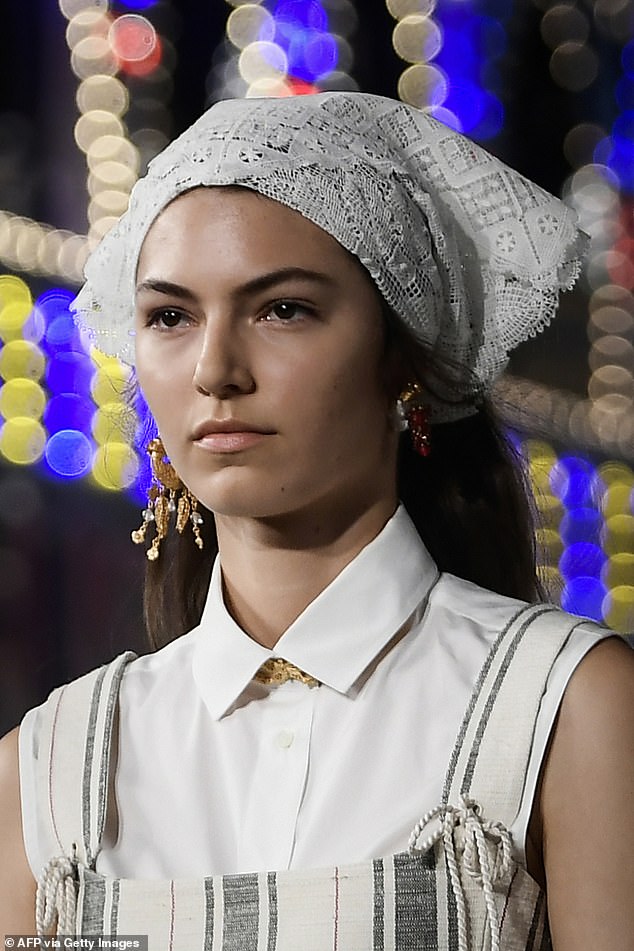 The fashion house reported a 15 per cent drop in revenue for the first quarter of 2020, dropping to €10.6billion

He added that there was no need for Dior to change its scheduling, he said: ‘We have hundreds of thousands of fashionistas waiting for the latest product in the store. That’s our business model and I cannot change it.’

The fashion house reported a 15 per cent drop in revenue for the first quarter of 2020, dropping to €10.6billion, the publication reports.

And while there may be concerns over the fashion calendar across the world regarding the future of digital versus physical shows, as well as diversity in models, he said the show was a ‘proactive step’ from the brand.

He explained it would show ‘signs’ of a comeback from Dior. 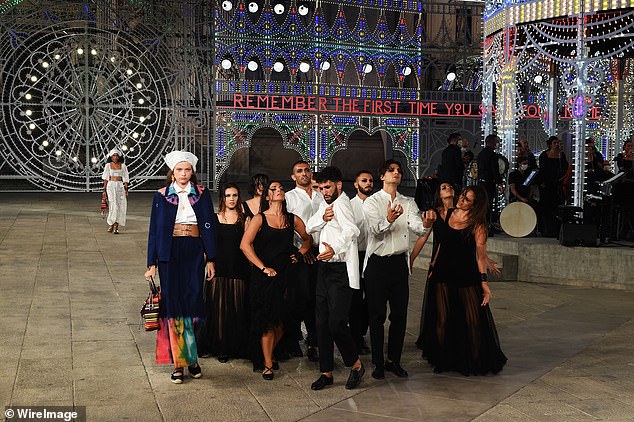