Discovering the plantations of South Carolina that are steeped in beauty, history – and cruelty

The plantations of the Deep South are one of America’s greatest bitter-sweet heritage sights. They juxtapose in vivid real life the co-existence of the languid Hollywood elegance of Gone With The Wind with the unspeakable cruelties exposed more recently in 12 Years A Slave.

Drive out of historic Charleston in South Carolina and in every direction can still be found avenues of ‘live oaks’, twisted branches draped in the wispy cotton-wool of Spanish moss, leading to fading grand houses. There, under their shady, pillared and pedimented porticos, the old Southern aristocracy grew rich and complacent on fortunes made from rice, cotton and the sweat of their slaves.

Today, many are open to the public, testimony to the parallel racial histories of the US that still persist in different more modern forms today; that and their distinctly English roots. They are not to be missed.

Telling different stories: Drayton Hall is a 1738 square-built brick house that was designed from a style book brought over from England

The McLeod Plantation is closest to the city of Charleston and has done more than any to tell the true story of the Gullah Geechee people – the West African creoles who plucked the Sea Island cotton, which often grew 7ft tall.

The house, empty of its furnishings, shows classical refinement. But 100 yards away is the poignant ‘slave street’ where tiny, clapboard huts with large fireplaces housed the benighted workforce.

Descendants of William Wallace McLeod have won awards for their honest depiction of the cruelty of the age with photos and testimony from those who worked their land.

A touching detail is the recollection that the last word of one daughter of the house on her deathbed was ‘Isabella’ – a poignant memory of the beloved black ‘mammy’ who had nursed her as an infant.

Tickets: $15 with concessions for children and seniors (ccprc.com).

Along the Ashley River valley, some 15 miles away, lies Drayton Hall, one of the earliest and best-preserved plantation houses in the US. Scrupulously conserved but not restored, the 1738 square-built brick house was designed from a style-book brought over from England. This was rich rice country – the crop that fed much of America and Europe – which led George Washington to attribute his victory in the Revolutionary War to Southern largesse.

Today, its elegant Georgian fireplaces and plaster ceilings are redolent of Jane Austen’s Bath, with a peeling upstairs ballroom, serviced by hidden passageways for the discreet servants. Yet in its museum, among the memorabilia and mahogany furniture, is a sinister blackened silver branding iron with the letters ‘I. Drayton’ – an ordeal suffered by all who worked there. 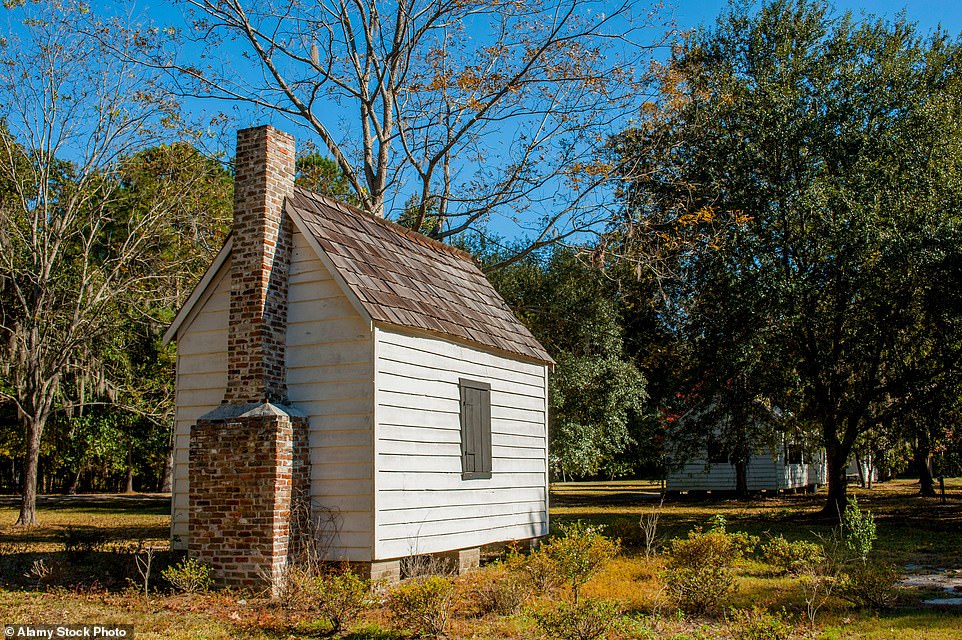 There’s lots to see and do at Magnolia Plantation, including tram and boat tours. Pictured is a slave cabin

Two miles further up the Ashley River you’ll discover Magnolia Plantation, with magnificent romantic gardens said to be the earliest and finest in all of North America.

Founded in the formal French style by another scion of the Drayton family, the Rev John Drayton, they were expanded in exuberant form in the 1830s, creating winding pathways and bridges through lakes and creeks, choked with azaleas, camellias and other exotics.

For children there are tram and boat tours, a zoo and nature centre, tea rooms, a theatre and gift shop and peacock-filled lawns to run on – the perfect antidote to more gruesome histories.

Tickets: adults $20, children $10, with $8 supplements for the tours (magnoliaplantation.com).

Four miles on lies the grand entrance to Middleton Place plantation, its Dutch-gabled outline viewed across a very British-feeling field of grazing sheep. 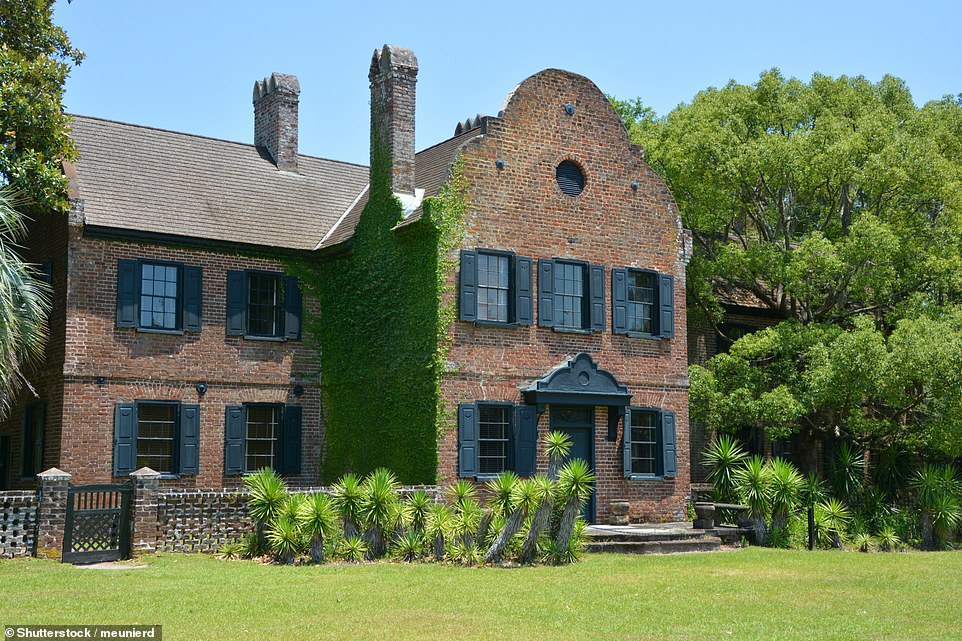 The Middletons were among the earliest settlers in the Carolinas, arriving in 1678. Pictured is the main house at Middleton Place

The house is rare for its astonishing, intact collection of family furniture, fine English silver and early American portraiture.

The Middletons were among the earliest settlers in the Carolinas, arriving in 1678. The paterfamilias, Henry, was the president of the First Continental Congress that devised the US Constitution and his son, Arthur, was a signatory to the Declaration of Independence.

Outside, live oaks and loblolly pines create elegant wooded walks around a huge reflecting pool. There is also a collection of rare-breed farm animals. Ideal for history buffs and fine-art connoisseurs.

On a lazy creek of Wando River, 20 minutes north of Charleston, sits elegant Boone Hall, founded by an English major, John Boone in 1681. 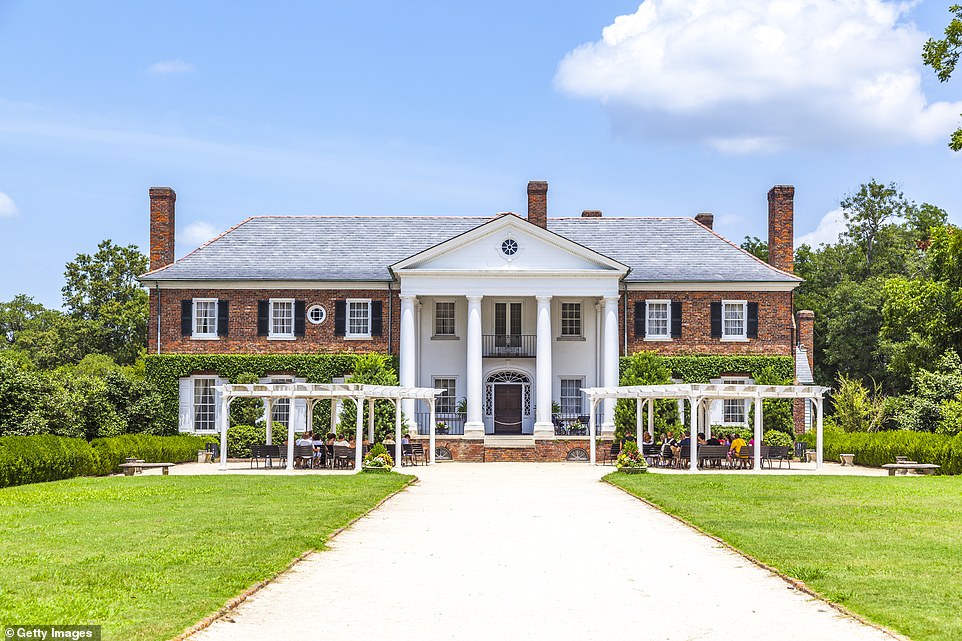 Boone Hall was founded by an English major, John Boone, in 1681. However, the present-day building dates from 1936

Its live oak avenue is the most famous and photographed in the US, and frames at its end an elegant brick-built mansion. The present-day building dates from only 1936, but its interior recreates the atmosphere that would have existed in Georgian times.

Outside, the plantation boasts a butterfly pavilion, trailer tours, an acclaimed Black History exhibit and a farm producing traditional crops from cotton and pecans to oysters from the creeks and waterways that criss-cross the estate.

The more ambitious visitor should not miss the Hobcaw Barony, an astonishing 12,000-acre estate granted by King Charles II to an early settler even before South Carolina was a colony. An hour and a half north from Charleston, near the ancient and charming port town of Georgetown, the Barony is now a serious academic wildlife and marine research and education centre, set in pine woods and marshes that characterise the Carolina ‘Lowcountry’.

At its heart is an intact slave village complete with wooden church and Hobcaw House, once the home of Carolina financier Bernard Baruch, who made his fortune in Wall Street in the early years of the 20th Century.

It was here that an ailing Franklin Delano Roosevelt, the great US wartime President, came to rest during the tense days of 1944. Churchill and Eisenhower were among a long list of celebrity visitors. For lovers of wild landscape, Hobcaw is the jewel in South Carolina’s crown and well worth the drive (hobcawbarony.org).