Discovering the world of bushcraft at Hampshire’s Meon Springs

You know the expression “grasp the nettle?” ’ says Ian Gosling, grabbing a stinging nettle from the side of the path, rolling it between his fingers and popping it into his mouth.

The day had not started well. My plan for getting the family — four millennials and two digitally-manacled fifty-somethings — out into the wild on a bushcraft weekend, hadn’t been going down smoothly.

Chat in the car went something like this: ‘There will be internet, won’t there?’

Primitive comforts: They family learnt how to cook on an open fire

I don’t think so.

‘What is all this survivalist stuff, anyway? I don’t want to just survive . . . I suppose we have to kill our own dinner, too?’

Oh, lord, what have I done?

But now we have all grasped the nettle — the surprisingly tasty leaves are apparently packed with protein as well as vitamins. The South Downs’ Meon Valley is resplendent in seasonal colours.

Ian, our master of bushcraft, is talking us through hawthorn (‘white flowers and leaves, bread and cheese’), burdock (‘fry the root in butter’), goose grass (‘far more nutritious than spirulina’), dandelion (‘totally edible’) and buttercups (‘poisonous’). And everyone is listening.

Can I relax? Not yet: we haven’t reached camp, let alone the butchery. But camp looks remarkably civilised: Bell tents with futons, duvets, beanbags and soft fleecy throws. There’s a bush kitchen and a hut housing compost loos (with a view) and hot-water showers.

‘We like to get a balance between comfort and wildness,’ grins Ian.

Having ticked shelter and water off the list for survival, we set about making fire. I can’t quite get a glow but the others spark fires with flint and steel — nurturing their tiny flames until they are fully-fledged fires. 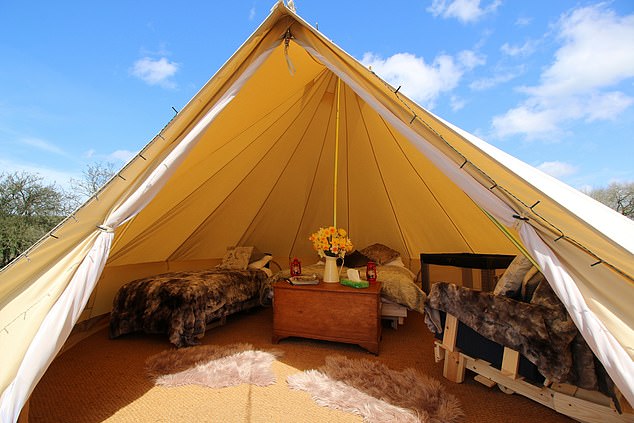 Glamping: The cosy bell tent, which is kitted with futons, beanbags and fleecy throws

Ian has a kettle steaming like Puffing Billy. We sit round drinking tea, before mixing a simple dough for a lunch of open-fire calzones. I’m calmer, but there’s a way to go.

We sit carving batons of wood into spoons — well, something spoon-like — and all goes quiet.

‘The best of conversation stoppers,’ says Ian. ‘Therapeutic,’ says one of mine.

Time to make dinner: the moment of truth. Six dead pigeons lie on the table. None of us is veggie, but three tend that way. How will this go?

Ian demonstrates plucking the feathers then cutting out the breast steaks. One of our number is admiring the landscape. The rest follow Ian’s instructions. Survived! Oh, wait . . . ‘Now for the venison.’ A deer, minus head and feet, hangs nearby. I’m gobsmacked by who volunteers to skin it (‘Bushcraft is a great leveller,’ says Ian quietly, ‘and people often surprise you’). Fingers pull between hide and flesh. ‘If you are a meat eater,’ says Ian, ‘there is a certain intellectual honesty in this.’

Venison steaks are fried and meat thrown into a pot over the fire with the pigeon, dumplings, herbs, (and, yes, some red wine and garlic) for an exceptionally tasty game stew.

We fall asleep to tawny owls and wake to great spotted woodpeckers. Leaves drift down the creamy canvas. Mist sits in the valley and a full English breakfast awaits.

This morning we are making bows. We saw off hazel stems (they will regrow). Shaping them with hand-axe and draw-knife (a makeshift plane) is both laborious and pleasing. Three hours later we shoot arrows from our very own bows — some even hitting the target! I breathe a sigh. Now I’m sure. The weekend has hit the target too.

The sun is already low when my family finally departs, newly-hewn bows across their backs, smiling and talking about nettles.

Embers Bushcraft (07814 567 640; embersbushcraft.co.uk) runs tailored breaks at Meon Springs (meonsprings.com) year-round (tents have woodburning stoves in winter). A two-day, one-night, fully catered weekend with two instructors and all equipment costs from £275pp minimum four people, £145 each additional person up to ten, £125pp to 16. Children under 12 25 per cent off (after first four).