If you thought Ibiza was all wasted, semi-naked millennials, you couldn’t be further from the truth.

Jet-setters and celebrities now flock to the mystical White Isle in ever greater numbers, edging and pricing out the tacky ravers.

Ever since Errol Flynn moored his boat to party there with the Hollywood crowd at Sandy’s bar in Santa Eulalia in the Swinging Sixties, the island has had a showbiz party reputation.

After seeing both sides of the Balearic island last summer for work and for pleasure, I decided to see what the resort was like off-season on a weekend.

I stayed at the five-star Atzaro Hotel, where Princess Beatrice celebrated the £70,000 wedding of close pal Eveie Longdon to Max Sangster, the son of horse racing magnate Robert Sangster, in 2017.

So it was never going to be terrible. 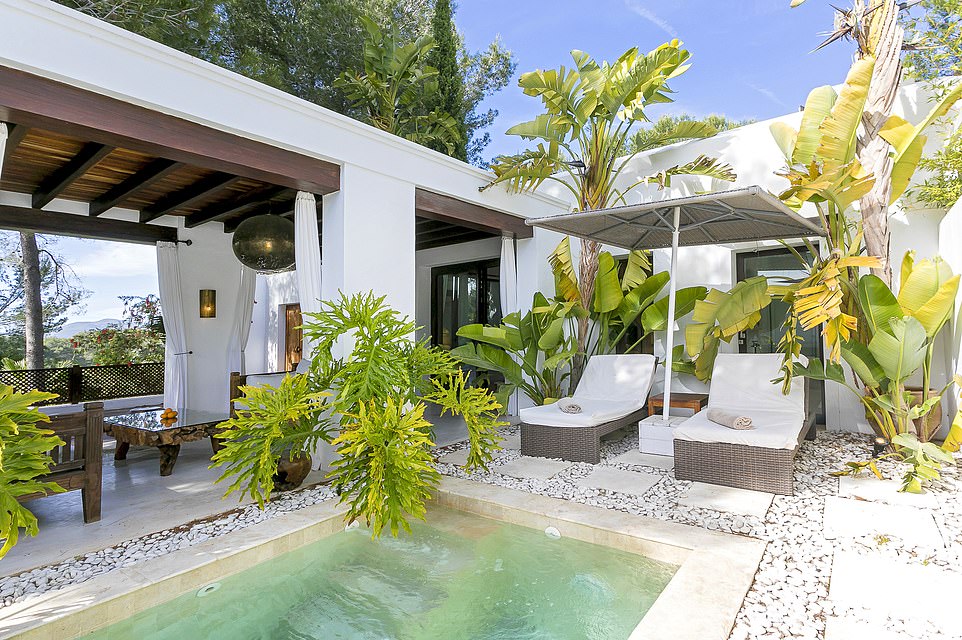 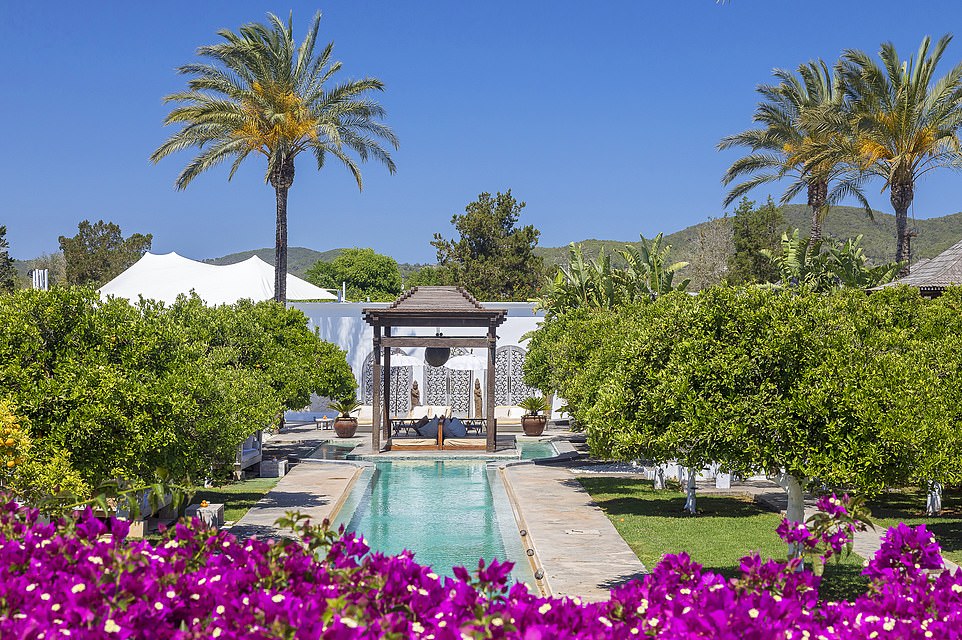 Celebrities including Shakira, Goldie Hawn and even Rihanna (who once hired out the whole restaurant for a meeting) have all sampled Atzaro’s ‘authentic Ibiza’ 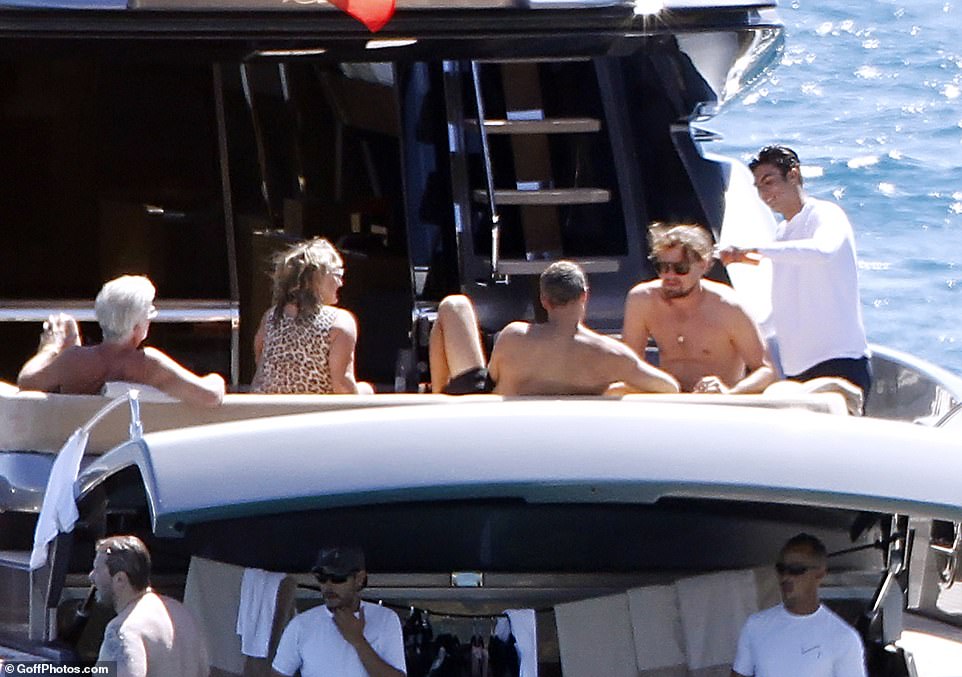 Leonardo DiCaprio on Vladimir Doronin’s boat in Ibiza in 2013. Leo’s mother, Irmelin, is also on board (in leopard print shirt) 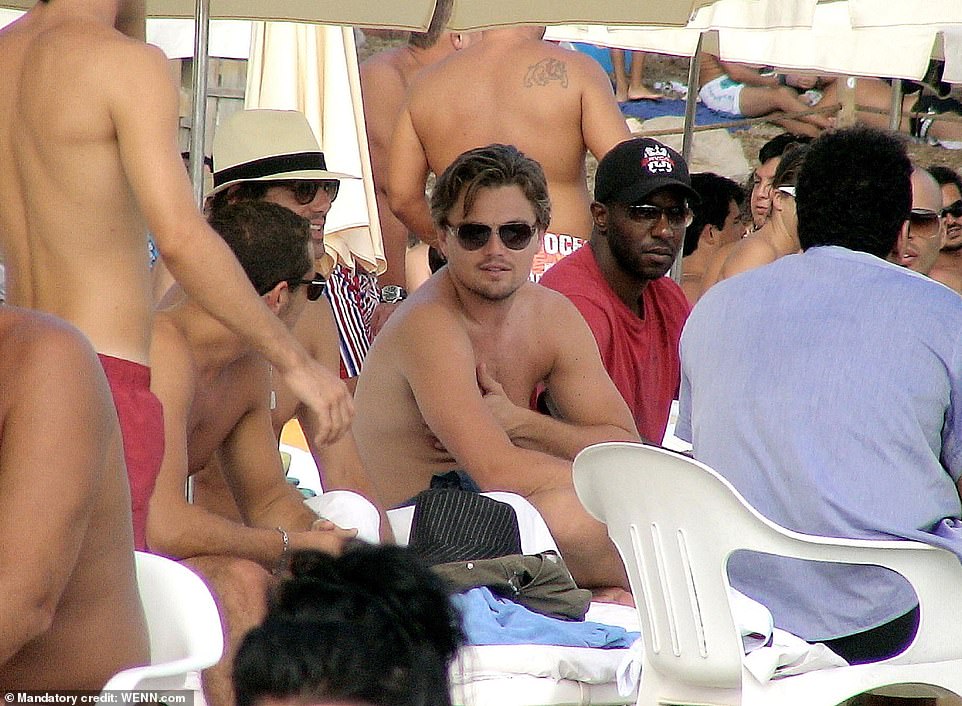 Leonardo DiCaprio on holiday with friends in Ibiza in 2009. The White Isle is clearly a white-hot favourite with him 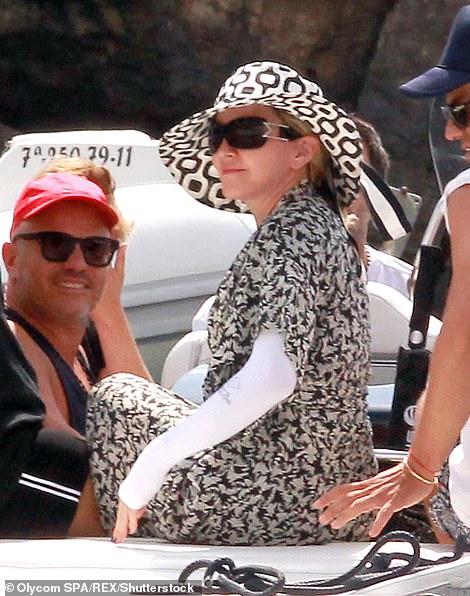 Madonna on holiday in Ibiza in August, 2014

In around four hours I’d flown from London’s City Airport – surrounded mostly by wealthy holidaymakers aged over 40, and families – and arrived by taxi at what looked like paradise basking in 14C February sunshine.

The sweeping entrance with wedding pergolas, waterways and discreet, white buildings welcomes you into several indoor and outdoor dining terraces, landscaped outdoor pools (one is 43 metres long) and a spa area, where you can sit in an outdoor sauna pod and watch trees blowing in the breeze.

I had a room with its own terrace, log fire, four-poster bed and palatial bathroom with a bath big enough for two.

Meanwhile celebrities and high-net-worth individuals have their own completely enclosed properties nearby oozing ‘natural luxury’ with private pools and large terraces.

Celebrities including Shakira, Goldie Hawn and even Rihanna (who once hired out the whole restaurant for a meeting) have all sampled Atzaro’s ‘authentic Ibiza’.

Our first meal there was a deliciously simple salmon with home grown Mediterranean roasted vegetables, washed down with a light Albarino wine. The restaurant was only half full, mostly with local visitors. 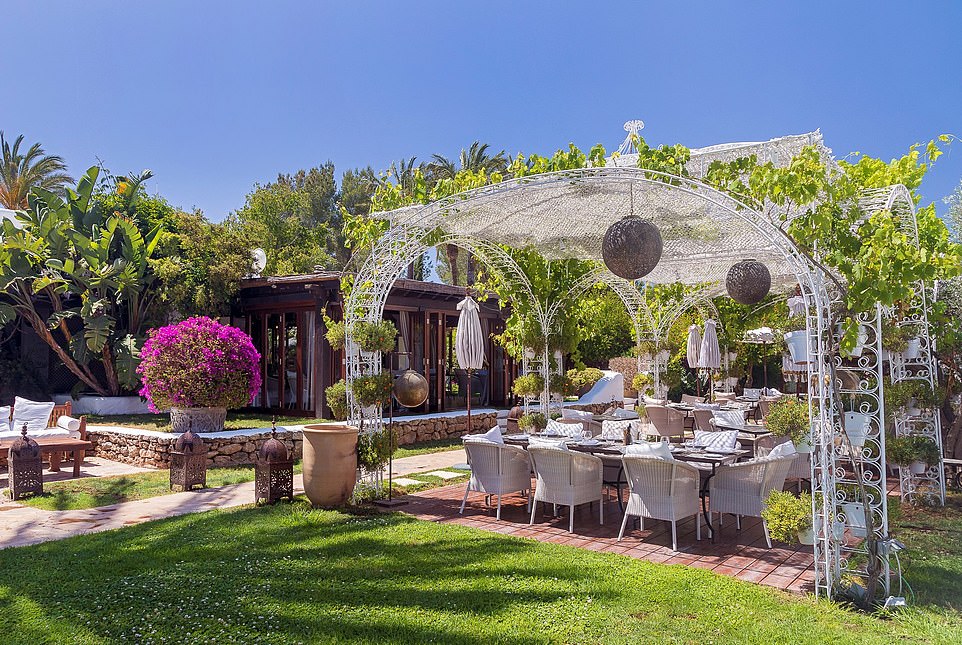 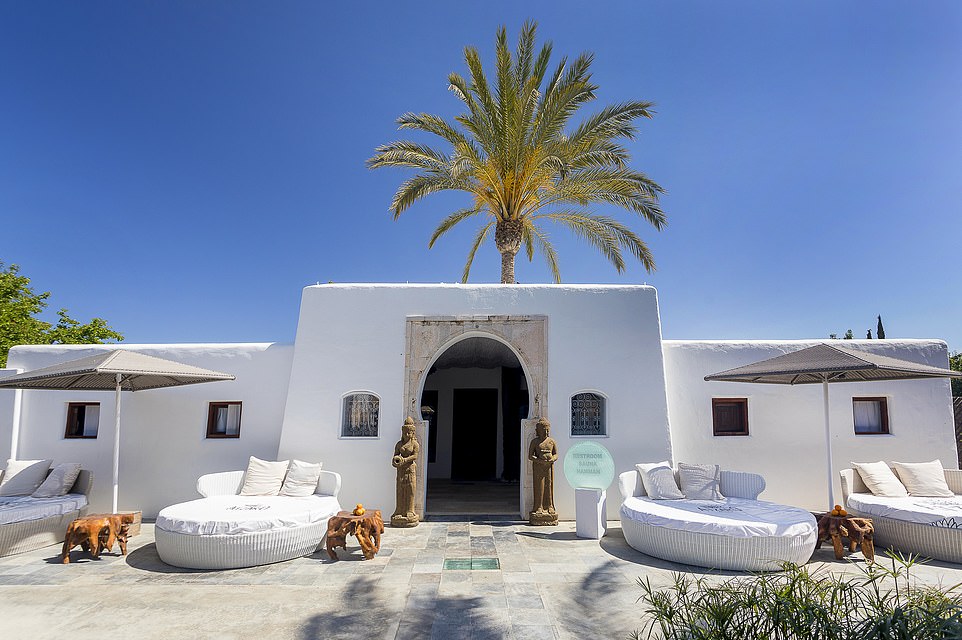 The rather splendid entrance to Atzaro’s spa, where Sarah and her plus one enjoyed full body massages 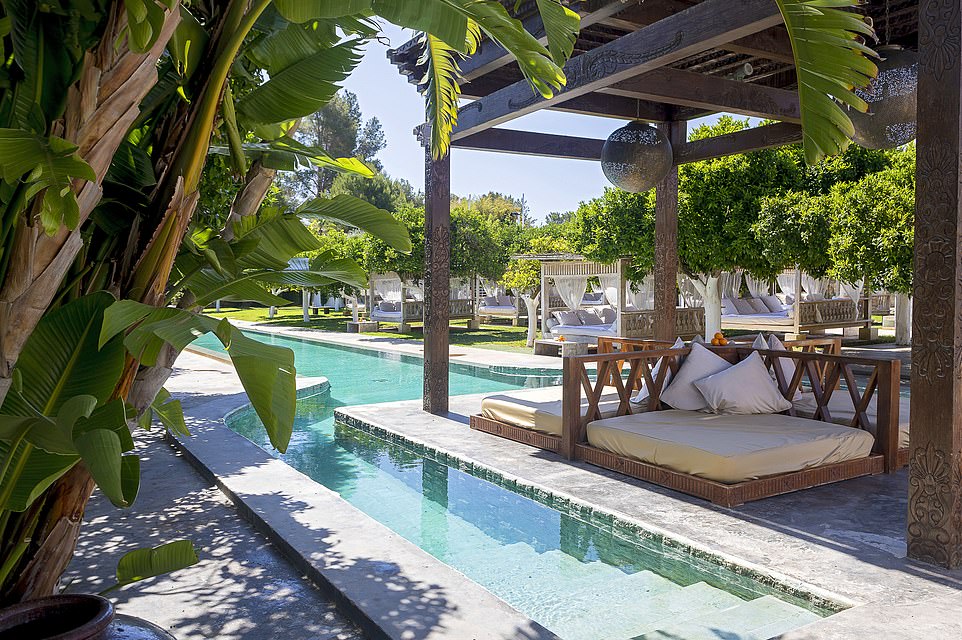 Then my boyfriend and I had a full-body massage together in the same room, which he said after he’d finished snoring was the best massage that he’d ever had.

Although the resort was fully booked up for the Valentine’s Day weekend that we stayed there, we barely saw anyone. We spent a lot of our weekend passed out in the sun on the various day beds scattered around the complex.

I also managed to explore Ibiza’s countryside, thanks to my well-informed guide, hiker and artist Timothy Cairns, who has lived on the island since he was a baby. 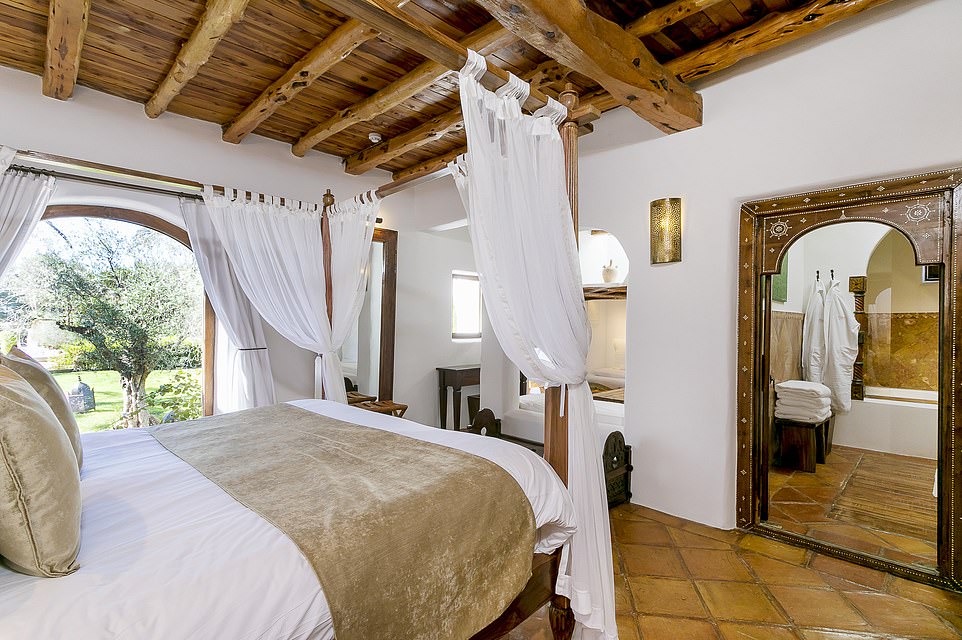 Sarah’s room had its own terrace, log fire, four-poster bed and palatial bathroom with a bath big enough for two. Pictured is a similar boudoir

Meanwhile Tim regaled me with stories of Ibiza’s bohemian residents, including Swiss artist and mathematician Hans Hinterreiter, who built a farm there in the 1940s and put an advert in a Swiss newspaper for a wife – oh the romance of those pre-Tinder days.

But when women came to stay they ended up moving on to the Australian who lived on his farmland instead. ‘It sounded like the women had far more fun with the Australian than they ever had with the artist,’ Tim said.

Atzaro – a 13-hectare estate still owned by the family of Victor Guasch who was born there – runs one to three-night cycling or walking getaways with picnics provided from 240 to 660 euros.

But as a former raver I didn’t go to the birthplace of house music just for the flora and the fauna. 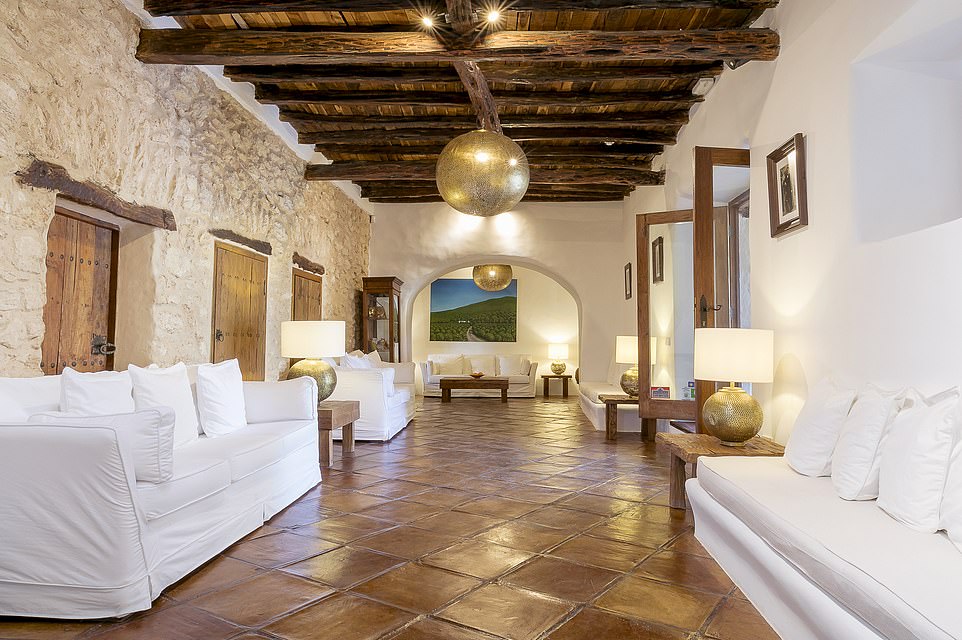 Opulence abounds: The hotel’s interior is swanky and rustic – a luxury farmhouse feel

I went to party, too.

So after an evening of drinking the agro-tourism resort’s home-produced Orangecello liqueur, dinner and wine tasting, my partner and I got a cab to the island’s iconic Pacha super-club in Ibiza Town to relive our misspent youths.

At around 1am we arrived to find that the club that I’d danced the night away many years earlier was closed, despite its claim of being open all year around with free entry out of season.

I’ve never been more gutted and relieved at the same time!

So please always do check before you travel, particularly in winter.

Atzaro has rooms from 155-460 euros a night from November to February, excluding the Christmas period. Prices rise from March onwards, from 210-1,190 euros for a high season de-luxe suite. For further details go to www.atzaro.com.